Lyndsay was invited to a friend's 15th birthday party a few weeks ago. I was a little leery about the hours of the party (6pm-1am), but was told it was an "Armenian party", which means all the family comes, as well as the friends, and a big celebration ensues. I dropped Lyns off at 8pm, after she got off of work, and told her she needed to be home by 10:30pm. There was loud music, and boys. But no drinking. Of that, we made sure beforehand.

Her friend had invited about 50 friends. At first, the prospect of that many presents is very appealing to a 15 year old girl, but the reality of it quickly turned Lyns off. She had a decent enough time, but not so much that she wants to replicate the experience for her own upcoming birthday. The music was so loud, she said, that nobody could hear anybody, even if you were standing right next to each other. There was dancing, but not everyone danced. Those who didn't, basically just sat around by themselves. Not so much Lyndsay's kind of party. Things got a little rowdy. So much so, that this friend is not allowed to invite friends next year. "She ruined her Sweet 16!" Lyndsay lamented. (Gotta keep the boys away from girl parties! They ruin everything!)

People here in the Los Angeles area throw parties EXTREME. Even for little tiny kids, lots and lots of money is spent on birthday parties. Each year has to top the previous year, and that's got to be stressful, not to mention expensive. Fortunately, and I do mean fortunately, the budget for that kind of party has never even been an option, so on the years that I allow my kids to have a "friend party" (besides just a family party), we've done things very differently. We usually have some sort of theme (remember Dylan's 'Scary that he's a teenager' party?) and we usually have some sort of structured activity of sorts, so the kids aren't just left to 'hang out'. I'm not keen on teenagers "hanging out".

Well, this is the issue: We need to have a 15th birthday party for Lyndsay because this is the first year that she's been in school and had lots of friends that she really wants to invite over. We want to do some sort of really cool, teenage-girl approved craft as the activity. Have music playing, snack foods, some good laughs, and conversation. But we're stumped on the craft. It has to be cool. It has to be tempting. It can't be too expensive. And it should be complete-able within about 2 hours max. I've searched the web. There are some really retarded craft ideas on the web. Fo Sho.

Here are two that I've found and like, but knowing that the 50 of you that read my blog every day have heads better than mine, maybe you have some ideas too. 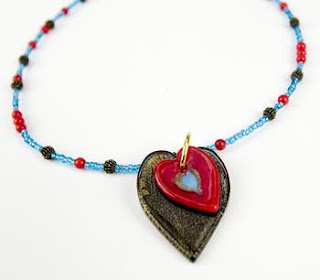 Then, the Bubblegum Slippers: 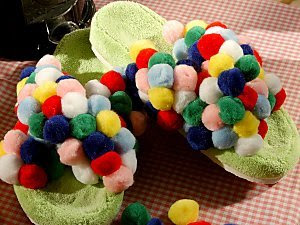 Or we could do a picture frame. Lyndsay made me a really cute one for Mother's Day that was easy and cheap. But please tell me your crafty ideas! I'm great at copying, not so good at invention. And don't say "make jewelry" or "dye a t-shirt." I need a link with a picture! :) Please help me!

What about a vinyl transfer onto a tile, piece of wood, or glass? My friend Rachel just sponsored a recent giveaway and in my chatting with her, it sounds really easy! We've done it at Enrichment and it's not too hard or time consuming. You can even make magnets... Her store is http://www.vinylchitchat.com.

I love the slippers and the vinyl transfer. Lyndsey knows her friends though, what does she think?

The temporary nanny we had last summer (college-age) taught my girls how to make braided bracelets. We made them at Tess's party last year, and I see girls from her age up through high school age wearing them.

There are a lot of really cool variations, and all it cost me was the price of the embroidery floss (I spent about $20 so that I could get a big variety of vibrant colors, and had lots left over).

Here's a link with a video: http://www.frugal-cafe.com/budget-crafts/articles/kid-bracelets1.html

Oh dear about those slippers. Oh dear, indeed. At least in the colors shown. And I seriously hear you about retarded craft ideas on the web..I've found nothing but retarded cheap looking crafts as well. Why not browse Etsy for something cute like I don't know, a small fabric purse and do the handles beaded or something. Or eye masks maybe filled with lavender (girls like to feel fancy with the eye masks!)

And I suppose those things would make more sense if Lynds were doing a girly party, ya know? Facials and pedicures and all of that. A lovely girly party. Crafty and fun but still LA! Awww.

This is not my area of expertise. I always call on my big sister for stuff like this, and she follows through great. (If she weren't going to school full-time right now, I'd send you her way!)

But we just had a 12th b-day party for my daughter and all we did was pizza and a movie. They giggled and had a ball and giggled some more. Easy peasy.

What about teaching them basic cake decorating skills? You could teach them how to pipe daisies or lace onto cupcakes or sugar cookies, for example. Then they could eat their work.

I am in 100% agreement with Abby Jenna. Those slippers need help.

And i love her idea of making their own pamper products. I would love to come to that party

I love the necklace and I see the slippers falling apart fast. For girls camp one year we got flip flops from the dollar store and covered the top V part with rhinestones. I just recently bought a bag for $3.50 at WalMart and it had 135 pieces in a variety of colors. To glue them on just get a bottle of sparkly clear glitter glue also from WalMart for $2.00. The teenagers loved them and actually wore them.

I made a magnet board that I really like. This blog is a pretty good how to, but I covered mine with fabric. You could leave it plain which would be cheaper. I made little magnets by hot glueing flower heads on little magnets. http://littlebirdiesecrets.blogspot.com/2008/08/framed-magnet-board.html

The can also make their own soap by melting some ivory down and then remolding it with some cute molds/shapes. Then they could bag them in cute little baggies and wha-la a make your own party favor! OHHHH and what if you made it a Kitchen Facial Makeover night!!!! Remember we did that in YW years ago? You can totally find the recipes online to lots of kitchen facial stuff! Here is a link for soap:
http://crafts.kaboose.com/easysoap.html
Bag the slippers, frame and other stuff - not old enough for a 15 year old party. Sorry!

You could also make truffles. I learned how at an Enrichment Meeting when I was 21, then I made 600 of them for my wedding reception. Different centers, embellished with different decorations...delish!

Alright, ladies, in defense of the slippers...Lyns thought they looked cozy, though we would for sure use cuter, more girly colors. They are sewn on, not glued, which helps, but still. We just thought they were cute, and slippers and flip flops are VERY teenage girl these days, all embellished and what-not.

Anyway, I love the ideas! Thank you!

Oh, and Tara, you must see a picture of the frame Lyns made at YW. It's REALLY cute, and teens would love it. Honest. All our L.A. YW wouldn't lie. :)

The spa night sounds fun. We just weren't going to go that route because we did a pedicure night for her last party when she was 13, but maybe the spin of making our own products would be fun. And cheap.

I don't like the slippers, but the necklace is cute.

How about homemade lotion? You could find recipes online (or I have a good one if you'd like it). It turns out to be pretty cheap, easy, and it smells sooooooo good (depending on what kind of essential oils you use).

My fave it making peppermint lotion...it even makes your feet tingle, it's that good. I made some for Christmas gifts a few years back and got a huge positive response.

Whatever you decide, good luck!

My DD who will be 15 this summer recently went to Michaels and bought a wood frame for $1.50 painted it black and the splattered on hot pink with a toothbrush, she then stuck on some sticker type things that she found sale. The black/hot pink looks awesome together. I have no link to it but could take a picture and send it to you if interested.

Terresa--I would love your lotion recipe, if you wouldn't mind emailing it to me. Thank you!

I think we might do bath bombs, soaps, and lip balms too.

if you wanted to do something vinyl - I could make it happen for you.... super cheap.... free-ninety free!! let me know - I head out of town in two weeks.

you gotta ask the teens. Luciette LOVED the slippers! and totally wants to do that one at her 15th party. Those are hip to teens but not what I would want so much for a gift. She loved the fact that it looked like a bubble gum machine! That would be cool if everyone could make PJ bottoms to match.

Last year we rented a kareoke machine with 50,000 songs for the weekend of her bday. That was a huge success and all had a great time participating. We even had an adult party the next night and had a blast.

She also says making soap is so fun. She did that at a party not to long ago and said it was "cool". They also did facials then had some lady come and put 70 style makeup on and took pictures. That was a hoot!

Anyway just some ideas...It will be fun no matter what you decide. Have fun!

Don't ask me...I thought the slippers were cute. Kam and her friends would love them.

You could also do face masks and scrubs if you like... lots of websites like http://www.natural-skin-care-info.com/homemade-skin-care-recipes-face.html that will tell you how. Could be fun, esp. if you take pics of each girl with their "mask". Happy almost 15, Lyndsay! I can't believe it!!!

Wow, I love seeing all the ideas everyone came up with! Happy Birthday to your daughter :)

That is just a humble idea. Home Depot shopping spree however.

Hey, I have a heat transfer machine that can be used to glue crystals "bling" onto T-shirts, pants, etc. I bought it for the appliques and other things I make. You can borrow it and you guys can do a "bling it" party. They bring their clothes and it would be fun decorating with little rhinestones, crystals, etc... let me know :)

Jenna I dont know when your doing this but you can buy flip flops from Old Navy and ribbon and you tie the ribbon on the flip flops. You can pick matching colors etc. While I like the puffy slippers (because they feel SOOO good) I had a pair like that with no puff balls...