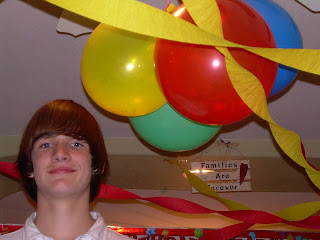 I woke up last Monday morning, straight out of a deep sleep, jazzed with an idea. A surprise party! For Dylan! His birthday would be on Wednesday, and he would celebrate with his dad, but the custom has always been that when he gets home, we plan a party for him here too, and sometimes invite some friends. If I planned the party, and held it Saturday night, the day he got home, he would never see it coming. It was the perfect idea.

My relationship with Dylan has been a source of worry and much prayer over the last year. As he grows into manhood and pulls away from me, sometimes we find ourselves engaged in a tug-of-war of wills. Sometimes he feels that I just don't understand him. His love language is gifts, and I knew that this act, if I could pull it off, would speak to his heart and he would feel loved.

I immediately got on Facebook and enlisted the help of one of Dylan's good friends, who was more than willing. I went through his list of friends and started sending private messages, making sure everyone knew it was a surprise. I called Lyndsay in Arizona and let her in on the secret and she took over a few invites. I spent the rest of the week neck-deep in birthday plans, tracking down friends, trying to dig around to find out who he would want there. Since he was turning 14, I was even going to surprise him by inviting all of his girl friends--who before have not been allowed to come for parties. I ordered a cake (the first time EVER that I have purchased a cake for one of my kids' birthdays, but I couldn't have anything suspicious.) I ordered a six-foot sub sandwich with all of his favorite meats, I borrowed party supplies, and picked up a few others from the dollar store. 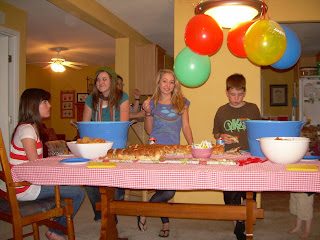 I could hardly sleep each night. Each morning as I walked, I would go over details so everything would go off without a hitch. We had a few setbacks. . .two of Dylan's good friends (twins) I could not find anywhere. No FB, old phone number, nobody else knew how to get a hold of them. Most of the ten girls I invited couldn't make it for one reason or another, and we had a few last minute cancellations, which bummed me out. But still, things were looking good. I kept my fingers crossed, since pulling things over on a teenager, with a whole bunch of other teenagers as your accomplices is no easy task. But everyone seemed so excited to help out.

I picked up the kids at the airport at 10:30 that morning. The trick was getting Dylan out of the house for an hour so we could pull it all together. Adam and I decided to do the whole "Sean and Caitlin are spending the weekend with us" thing, but Sean was already at our house. So, Sean came up with the idea to tell Dylan about this cool knife he got for Christmas and entice Dylan to go with him to see it when they picked up Caitlin. Caitlin, who would take a suspiciously long time "fixing her hair". (wink, wink.)

The guests were told to arrive at 6:30pm. Adam left with Dylan and Sean at 6pm, and I flew out the door after them, with Aiden in tow, to pick up the cake, the sub sandwich, and the ice. Meanwhile at home, Lyndsay and two prearranged early-arriving guests got to blowing up balloons and stringing streamers across the room. It was so much fun, all the anticipation. I knew Dylan would never, ever see this coming. 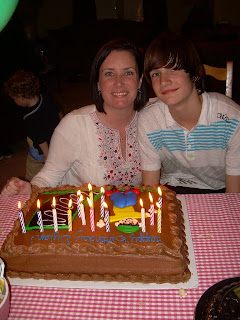 The guests all showed up. The house was decorated. The food was spread out. Adam gave us a signal call that he was getting off the freeway, and we turned off the lights and waited.
I wish you all could have been there. Waiting for Dylan was seriously better than waiting for Santa.
When he walked into the house and the lights flew on and everyone yelled "Surprise!", he was sent into a state of shock, instantly. He kept looking around, like his whole world had been turned upside-down and inside-out. He couldn't put it all together, how all of these friends--many of whom had never been to our house before--were all sitting here in his livingroom. And as it began to dawn on him how deep the deception had gone, how everyone had been in on it, how the drive to get Caitlin, the knife, the hair, how it all had been planned, I could see that he was struggling to take in the reality of the fact that he, Dylan Todd, who knows everything, didn't know THIS. We got him GOOD.
In fact, the first hour of the party, he sat in a sort of catatonic state, mentally going over in his mind how far back the trickery had gone, and what had actually been real over the last week. At one point, I went over to him and put my arm around him and said, "Are you okay? I mean, is all of this okay?" And he just said, "Yes! I love it! I just. I just. I've just never been surprised before." (insert evil laughter here)
He snapped out of it, and the kids, the whole rowdy bunch of them, had a great time. It was so gratifying. He thanked me over and over. I knew that the most important goal had been accomplished:
Dylan felt loved and cared for. He knew I'd done it all for him. Because he's worth it to me. 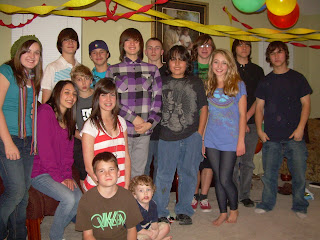 I love it! I'm tearing up over here! I'm so happy for you that you were able to pull it off for him! What a lucky kid he is to have a mom like you and what a lucky mom you are to have a kid like him!! Love you guys!

Awww..I'm all teary! What a wonderful surprise!

Jenna, you're the best. I love you.

How fun! That is just great I am sure it meant so much to him. He will NEVER forget it.

Great idea! So glad you pulled it off. Great work!

On this subject, I haven't forgotten the email you sent me. But formulating a response has been more challenging than I thought it would be.

Oh how FUN! He will remember this forever and ever. Great job!

Oh, how much fun!!!!! I LOVE doing things like this! And reading about this one was even more fun because now, having finally been there, I can picture it all falling into place!

This is a superior article as they all are. I bring into the world been wondering wide this an eye to some time now. Its great to grow this info. You are fete and balanced.