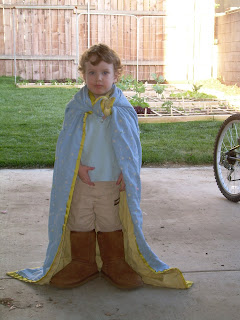 "Supey Conor"
Yesterday I was at the sink in the kitchen, and Conor walked over to the back door in the kitchen and picked up my keys from where I set them. He started locking and unlocking my car through the glass. I told him to stop it. He continued in his lock-unlock fest.
"Conor! Put those keys down right this instant!" (I'm always afraid he will push the panic button and I can never figure out how to get the darn alarm to quit.)
He set them down and trudged into the dining room and sat at the table where his dad was. He put his chin in his hands, and sat slumped down with a look of doom and gloom on his face.
Adam asked, "Doo-Doo, what is wrong? You look so sad."
Conor replied without even looking up, "My life is ruined."
Adam asked, without any judgment in his voice, "Why is your life ruined?"
And Conor said, "Because I touched Mom's keys. My life is ruined." And then he sighed. (He's very dramatic, that one.)
I was listening from my spot at the sink in the next room, and what I heard next really amazed me.
Adam said to little Conor, "Wow. That really stinks to be only 3 and have your life ruined."
And Conor said, "Yup."
And that was that.
This amazed me because I thought it was really beautiful that Adam gave Conor permission to feel whatever he wanted to feel, and just validated him in it. I wouldn't have reacted that way. I would have attempted to talk him out of feeling as if his life had been ruined. I would have tried to help him see the light, see things differently, and feel better. That's a mom kind of thing to do, I guess.
But sometimes people just want to feel the way that they feel, and not feel judged. Even if they're being a tad dramatic.
Later, when I tucked Conor into bed that night, and I leaned my face down to his to kiss his fat face and love on him, he reached up and put his hands on my cheeks, and looking deeply into my eyes (told you he's dramatic), he said, "I don't want a different Mommy. I always want you."
Back from ruined.
Posted by Jenna at 7:45 AM

That's one of the sweetest things ever--both parts!

What a cute little guy! It's amazing how quick those little emotions flip.

that is beautiful... I wouldn't have thought of it, but it's so simple. I too would pull out the momma lawyer in me, providing evidence of how life isn't ruined. I have this weird drive to make sure I (and my family) remain grateful. Almost as if the earth will crash down around us, in consequence, if we aren't...

That is sweet that Adam knew exactly what was needed. I think we all sometimes just need to feel the way we feel ... and then we get over it.