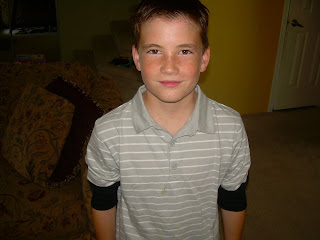 This is Aiden. He's almost 11.
I love my Aiden. He was just a baby, really, when his Dad left, and so he was a source of great comfort to me. He was the reason I got out of bed on many, many days. After all, he had to be fed and changed and loved on. He slept in my bed many times and was my little companion. We moved to Utah when he was 4, and when the other kids went to school, he tagged along with me on dates and Mary Kay appointments.
Aiden's at a great age right now. I say that because I have an older boy and I know very well what's coming to me, so I thought I would pause and reflect on how sweet and good and kind he is and enjoy it while it lasts. (May it last forever? Pretty please?) 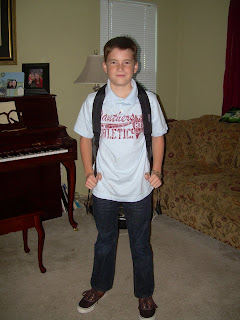 Here is Aiden on his first day of school this year, 5th grade. He goes to a special magnet school for gifted/high ability students. Aiden is incredibly bright. He was tested at the top 2% of the nation's gifted children. But he's also very humble, very quiet, and introspective. He's got a lot going on in his head, but he doesn't let much out. I like that about him, and I love it when he gives me a peek inside. He wants to be an astrophysicist one day and work for Nasa or JPL. 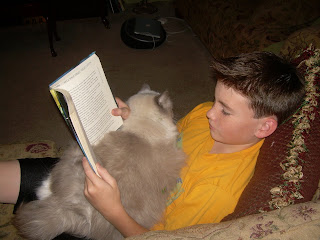 Aiden loves to read. He reads every night before bed, and every morning after his shower and before breakfast while the big kids are at Seminary. You'll notice that the cat is very fond of Aiden. Aiden is the cat's favorite, and wherever Aiden is, that's where he wants to be too. Even if it makes reading or turning pages difficult. Aiden doesn't mind. He loves that cat just as much. 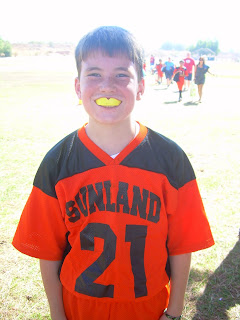 Aiden is a very athletic boy. He loves to always be involved in sports and he takes pride in being the 2nd fastest runner in his school. He loves baseball, and right now he is playing flag football. I go to all of his games and I think the coach yells at them too much, but he says it's "fun". Gender differences, I guess. 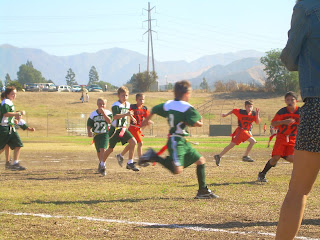 See that stride? He's in the back, sprinting like a cheetah. #21. Such a cutie. 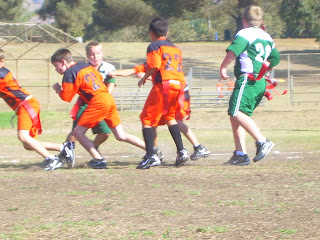 Look at him charge right though! 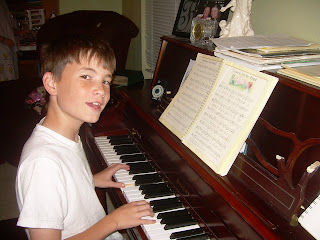 Aiden is also a reluctant musician. He played the cello for two years, but then he got sick of carrying it to and from school, so he quit. He takes piano lessons, and most days he regrets ever asking for them, but he just has so much talent I can't let him give them up. I refuse! Our biggest battles are over piano, and he says nothing good comes of piano, but to that I say, "Well, except for the fact that you're learning to play!" Plus, it's good for him. 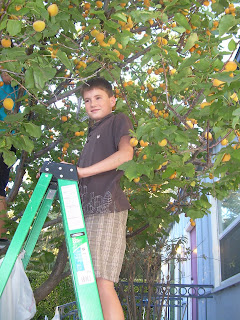 Aiden is a very helpful boy. His love language is Quality Time, so he'll do just about anything to spend time with those he loves. He is very capable and very cooperative. If I have a project in the kitchen, he's there to help. Here he is on a ladder picking apricots for me so I could make the jam. You may remember how we spent a day making tomato sauce too. 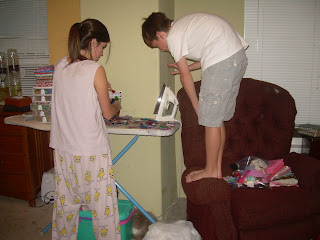 He and Lyndsay are very good buds. They are very similar kids, actually, despite their gender and age differences. Aiden is good at taking an interest in things that matter to other people. He also doesn't think it's dumb or lame to say that an outfit looks good, or that a hairstyle looks pretty, or that that fabric is so cute! Lyndsay capitalizes on this, and Aiden has become a trusted advisor in her life. Here he is looking over her designs for her bird clips. 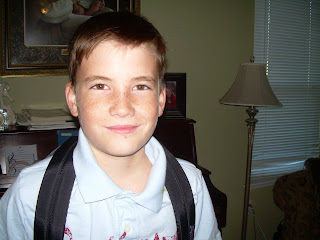 I just love this kid. Look at those freckles! Sometimes he doesn't get all the attention he deserves because of drama or busyness with the older kids, but he is definitely a blessing to our family. In not too many years, he will be the oldest at home, and he and I talk about how much fun we'll have when we can spend more time together, and how great it will be when certain older brothers aren't around to bully and annoy. He's got a bright future ahead of him, but I hope he takes his time!
Posted by Jenna at 9:29 AM

What a nice tribute. Sounds like a great boy.

He's a great kid! I have a boy that age too and, although I DON'T really know what's ahead, I'm still trying to enjoy the times he'll snuggle and watch a show or let me into his little world in some way. Best of luck to Aiden with his VERY bright future.

One of the most pure and gentle human beings on earth. Love that boy!

I second that entire post. A.T. is a completely amazing kid. He deserves so much recognition for his excellence in everything. Dadam