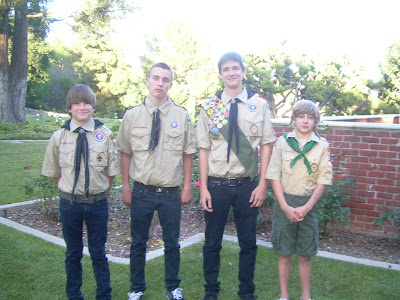 Scouting takes up a significant portion of my mental energy. In scouting, each time a boy earns a new rank, whether it be Wolf or Bear in Cub Scouting, or Star or Life in Boy Scouting, he presents his mother with a rank advancement pin in front of everyone at a Court of Honor. This is not just because the Boy Scouts of America is fond of mothers, but because most of these boys would never earn an advancement without the blood, sweat, and tears of their mothers and we deserve that pin as much as they deserve the patch. Or, at least almost as much.
I do think the Scouting program is a good one for boys. Boys would rather do anything but work hard, it seems, but get them going and get them focused, and even they become surprised and impressed with what they're made of. Hard work pays off in the form of not just merit badges, but confidence and new life skills. I think it is something commendable to begin something like Cub Scouts at the age of 8 and see it all the way through to Eagle, and I want each of my boys to do that.
Problem is, I'm pretty much towing that line alone.
Adam isn't so much a supporter of Scouts. Too much work for him, but he supports me in supporting Scouts, so I can work with that--and a nudge to not utter a single negative sentiment to the boys. They can't know they have an ally. My stepson's mom isn't too big on scouting either. I know she wants Sean to achieve in scouting, but the way to that goal falls largely on us, and no small amount of force is required, let me tell ya.
Like most moms, probably, I keep up on merit badge requirements for the boys, Scout meetings, Scout camps, Courts of Honor, and monthly merit badge manias. I also do all the purchasing of all the scout paraphernalia and all the bloody attachment of those hard-earned patches and badges. Man, do I hate it when a boy grows out of a shirt.
Maybe you noticed that there's an extra boy in the photo above?
That's Brad. He's Dylan's best friend. He doesn't have a mom around, and his dad isn't very active in his life, so Brad spends a lot of time here with us. He eats dinner with us many nights each week. We pick him up for Church, YM activities, Seminary, and Scouts. He spends movie nights with us and weekends. Sometimes the kids balk at another Dylan around the house, but mostly, we treat Brad as if he was one of the family. And when it's time for a Court of Honor, I have to get Brad ready too. I took him to his house to get his uniform, which he brought out in a balled up mess. So, I ironed it, got him all ship-shape. Then I fed him, with all the others, and when he thanked me, I told him it was no problem, and I couldn't wait to see what he got me for Mother's Day.
Those four boys will earn their Eagle Scout awards! (And Conor will too, but right now I'm enjoying my hiatus from Cub Scouts.) Dylan is almost done (one more badge and his project!), Brad about halfway, Sean just behind that, and Aiden is tearing up Scouting with his youthful enthusiasm and a list of all the badges he wants to earn. We had our Scout Camp meeting last night, and all four of these boys are off for a week at the end of June to earn more merit badges! Yes!
And when they do start earning Eagle, I think instead of a pin, I'd like a cruise.
Posted by Jenna at 6:07 AM

As a dad and a registered adult scouter, I commend you for accepting this and pushing your boys. They will thank you for it when they are older, if not now. You never cease to amaze me, Jenna. Keep up the good work. You are being watched and loved, if only from a distance.

a cruise! you crack me up, but you are right you totally deserve it :)

Good for you! I'm still clueless about scouts even though I have 2 in Boy Scouts right now & they're both planning on the Jamboree in 2013. That means a couple more uniforms and patch sewing for me!!

Scouting does take up a ton of mental energy for moms.
I am a huge fan of the sticky stuff the Scout office sells to attach patches. Might not looks as good, but it sure goes on fast.
My last son has 2 merit badges and a project before he is done with his Eagle. I can't wait!! Not for him to have his Eagle, but for that eternal checklist to be OVER. :)
Scouting really is important. It's just so much work. Your boys (and friend) are lucky to have you.
Sandy Ross

Sandy, oh yes, I love Badge Magic too! It's the only way!