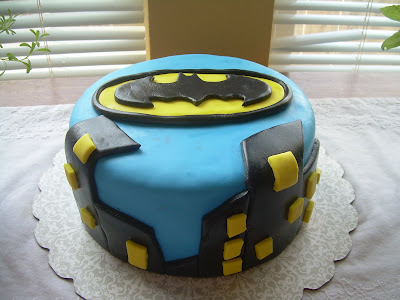 Right now there are two things that Conor loves: Batman and Star Wars. When deciding on a cake for his 5th birthday, without question it had to fall into one of those two categories. We almost went Star Wars, but a few days before, he came back around to Batman, and I was sort of relieved, because I wasn't sure how I was going to pull off a quick and easy Star Wars cake. It had to be quick and easy because time was really crunched, and because I didn't want a huge cake since half of our kids are not at home to eat it. 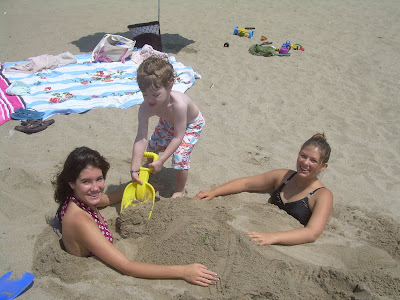 Conor knew we were going to the beach for his birthday. Early yesterday morning, while we were still in bed, he cracked open my bedroom door, and with his champion bedhead, shoved an open hand in the door, fingers spread, and said, "I'm 5!"

"Nope, you're still 4," Adam taunted. He loves to do that, taunt Conor.

And then he said, "I think I'm going to be sick." (He did look suddenly very pale.) And he ran into our bathroom and threw his head into the toilet.

He didn't actually throw up, which was a relief, and his sudden illness was confusing, but it passed just as quickly as it came, probably because he drank a whole bunch of water when he woke up, and water on an empty stomach first thing in the morning makes me feel nauseated too. 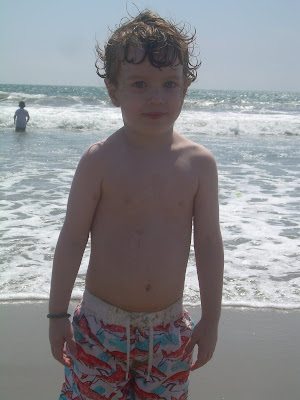 So, we spent the day at the beach. Conor loves the beach. He spent an equal amount of time playing in sand and sea. In fact, he doesn't call it the 'ocean', he prefers 'sea'. And he kept saying, "Will you go out to sea with me?" or "I love to play in the sea." 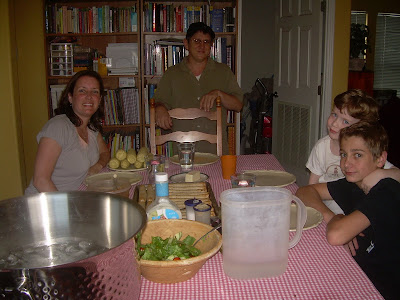 Back at home around 5pm, Lyndsay and I hustled to get dinner on the table while Conor rinsed off his sand and sea in the shower upstairs. He'd chosen Baked Creamy Chicken Taquitos for his birthday dinner, with some "squashed" (refried) beans, and corn on the cob. He got to choose who said his birthday dinner prayer (Sean), and once the "amens" were uttered, right away he ushered us into our birthday family tradition. "Okay," he said, "Sean, you can go first to say what you love about me." And then he proceeded to order each of us to say what we loved about him. Which is so, so easy to do. But then a surprise ending, as he continued, "What I love about me is that I can control my body so that I can enjoy all my happy things." (He's been especially interested in the topic of self-control lately. He's an interesting guy.) 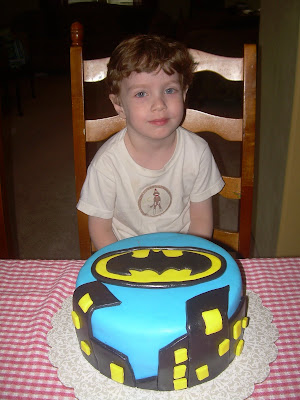 Next up was Bat Cake, and singing, and making wishes. 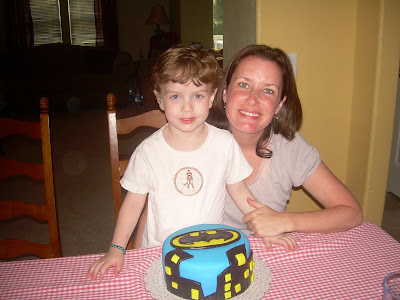 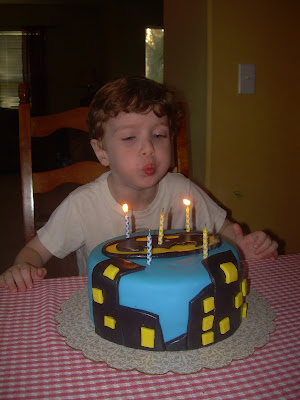 How in the world can there be five candles on my baby's cake? At first, he wished for "all the toys in the world", but he said that one out loud, so clearly it's not going to come true. And then I think maybe his self-control hasn't come all that far after all. 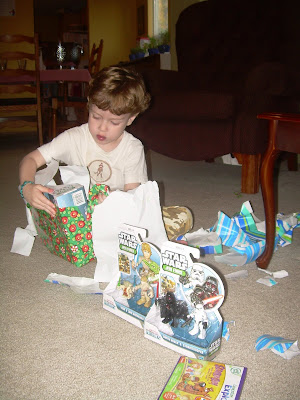 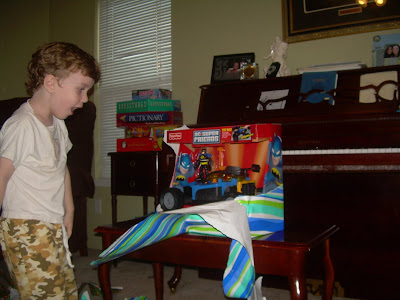 Then it was presents time, and he was very thankful and very satisfied. We got Batman and Star Wars covered, and a Leapster Explorer game too. 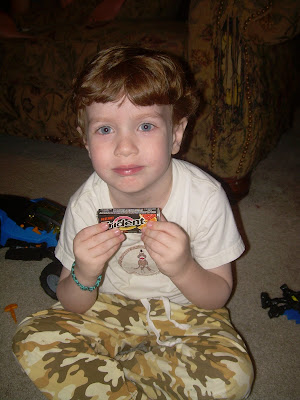 Lastly, the Gum Ceremony. In our family, children have to wait until they're 5 years old to chew gum. On their 5th birthday, we give them a pack of gum and videotape/photograph their first gum-chewing experience. Lyndsay clearly remembers her Gum Ceremony, which delighted me. For Conor, it was somewhat of a let-down. He popped a piece in his mouth and began chewing. He passed out pieces for the rest of us to enjoy. Then he got up to go into the bathroom. I asked him what he was doing and he said, "I'm spitting it out." "Why?" I asked. "Because that's what you're supposed to do!" he answered. Clearly, chewing something for simply the purpose of chewing it seemed ridiculous to him. Oh well. At least now the mystery and intrigue of gum has been satisfied.

On the way up to bed, Conor said, "This was the best birthday ever! Thank you so much, Mom, for all of my new toys! I love my new toys!"

And I said, "You're so welcome, baby boy. You deserve them."

And he said, "You're right, I do deserve them."

Clearly his self-esteem, if not his self-control, is way above the mark. But I love that he thinks he is something else. I think he is too.
Posted by Jenna at 6:52 AM

Awesome cake! And I love the gum ceremony...it's ingenious.

He's a darling. And the cake is awesome! Well done. Some day I'll have to show you a photo of the Star Wars cake I did one upon a time.