I sat at the dining room table tonight, on the bench, not even walking around to my usual chair, and ate a microwaved frozen burrito. I didn't even turn the light on in the dining room, but at dusk, there was still enough to see my plate.

Weird, I thought. My life has become so weird. What has happened to my life, and when did it happen?

It wasn't long ago that I was tripling batches of pancake batter. Now I make half a recipe and wrap up the leftovers. There is rarely anyone to cook for. Dylan, of course, hasn't been home in a year. In fact, I haven't even seen the 17-year-old version of Dylan, and I only saw 6 days of the 16-year-old version.

Lyndsay is home from BYU, technically, but she works the late shift at the restaurant, which means she eats a late lunch--usually out somewhere with her boyfriend--and then something from the menu at work during her break.

Aiden is gone for the summer visiting his dad and brothers in Arizona.

Adam has gone the way of all Adams. With him, went his teenage son and daughter.

Conor's here. But cooking dinner for Conor is so thankless. And I'm not picky. So.

Cooking for a large family has always been part of my identity, long before I had a family of my own. When I first married, I didn't know how to cook anything except in a 9x13 pan.

It's in my genes. Besides growing up the oldest in a family of nine children, with a mom who was always whipping up something yummy, there's this part of me: 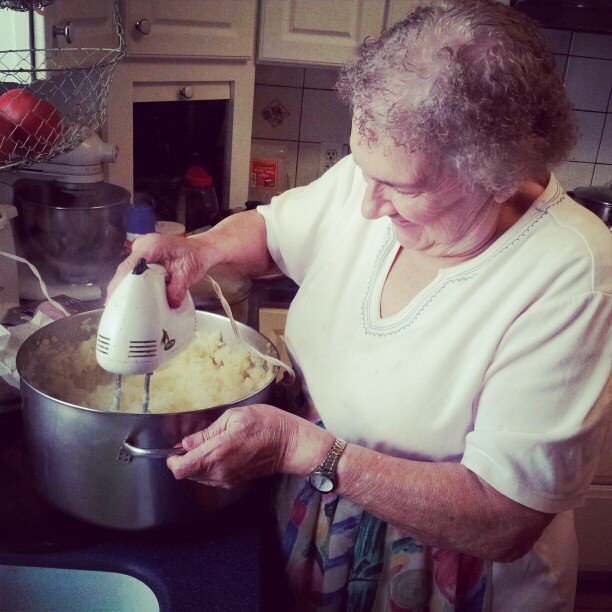 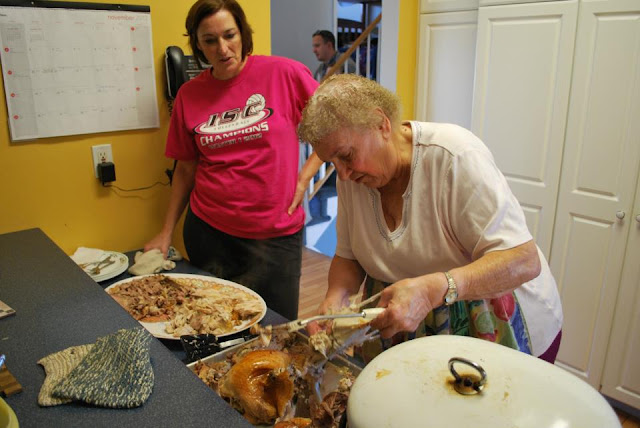 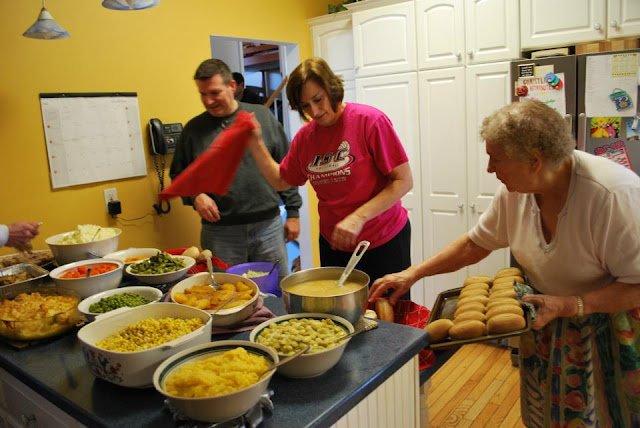 That beloved woman is my Italian grandmother, my father's mother (and my aunt, who plays dutiful and capable sidekick, as well as faithful dishwasher, to Grandmom.) Cooking is what she does. Well, that and baking. And dipping chocolates. And decorating cakes.

She has seven children, who grew up and moved out, but they keep showing up for dinner, bringing more people with them. And she just makes more food! Anyone who's hungry can just go to her house. All the missionaries eat there, all the stray folk. All are welcome anytime.

Whenever she comes to visit me, I'm not even allowed in the kitchen. Well, except to wash dishes. Grandmom doesn't wash dishes. She's known far and wide for the love she has shared from her kitchen. And I never realized how much a part of my identity cooking for my family was.

So, these days I feel a little lost when there's no one here to cook for. And when I do cook, that other part of my identity--the frugal, waste-nothing! part--goes a little haywire when there are leftovers not being eaten. I'm trying to readjust. I'm trying to glory in the lower food bill, the additional reading time, the smaller loads of dirty dishes, but it's all just plain weird. And I don't know how to be in it.

The table set for two reminds me of the passage of time, of course, that children grow up and move on, and that's what we want, isn't it? But another part of it whispers of failure to me, and I think that's been a stumbling block for me. I took out two leaves in my table because a relationship failed, and with it, a family. My son had to leave, for both of our sakes', and while we clashed and butted heads about so many things, I could always give him love at the table. Feeding him was one of the only ways I felt successful in connecting with him. I wish he would show up at the door. I would hug him so tightly, and hope he would say something like, "I'm hungry, Mom. What's to eat?"

Oh, would I get to work!

Yes, evenings are different around here. Quiet, for one. Lyndsay goes off to work, Conor and I eat something simple, maybe some soup, or a sandwich with lots of veggies and fruits. Some chocolate milk. Two plates in the sink afterwards are hardly worth making a fuss over. Bath time and read-aloud, and then off to bed he goes before the sun is even done for the day. And then I get to my book. I try to keep my thoughts positive against the opposition, and I marvel at how many years I craved a clean, quiet house, only to get it and realize that clean and quiet equals empty. Something I hadn't fully considered.

I hope, like my Grandmom, that my children will always want to come home to eat. That they will bring others with them. That my home will be a place where there is nourishment. And understanding, and forgiveness too. I hope food can be redemptive and healing. I think it can be. I'm counting on it.

In the meantime, tomorrow will be breakfast for three, which is certainly a far cry better than one. And I haven't forgotten that.

Labels: parenting, To be me

Very well said.
I feel the same. It's all too weird and sad and failure feeling. One day I hope it all feels more normal.
The food bill reduction is nice.

I love you Jenna! I know our experiences are different but I think that I do understand a little bit about the empty feeling and the loss of identity with major changes. I feel for you . . or with you?

How sweet to see your grandma and aunt still cooking in New Jersey! Totally love them! How awesome to have that a part of your family heritage! It is a hard journey to have our rough edges smoothed and our diamonds polished. I know that the Lord loves you and you are not forgotten!

I feel your melancholia and wish I could do something about it. I love you.