The Down Side to Acceleration 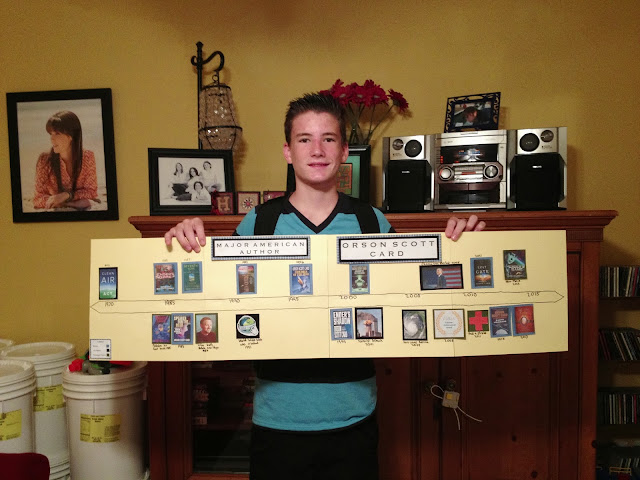 Testosterone is everywhere, let me tell you.

He blames it on his "Staley temper", which is definitely a factor, but really, I think it's the testosterone. Hormones are a cruel trick.

There has been one project after another for Aiden. This month has been the Major American Author theme, with a project due every single week. Aiden chose his favorite author, Orson Scott Card. First there was a Timeline project, then an oral presentation (he did a game show), and now he's finishing up the book he chose by Card to write a report on it. (I write all of that like it was smooth sailing, oh no. Those were each mountains to climb.)

This is why today I am making Vanilla Pudding Cinnamon Rolls with Cream Cheese Frosting. Because I'm gonna need some help, and cinnamon rolls have never let me down.

Aiden wants so much to do a good job. He has very specific ideas in mind of how he wants to do things, and he has very little patience at this particular time in his life. This can mean flying glue guns and staplers, and possibly even some tears.

The hard part is that he has very little time. He leaves at 6:15am and doesn't get home until 4:30pm. He has football practice and games three times a week, and he doesn't do homework on Sundays. He has good intentions of staying on top of everything, but time really does fly by when you're busy.

Yesterday after school and a very large snack, he arranged himself on my bed with his Kindle and the cat and set to work reading. He dozed off a few times, but tried his best. Several hours later he was almost in tears. He was so tired and still had 50 pages left to read to stay on track to finish by Wednesday. Worse, he said he was just not understanding what was going on in the story. My heart went out to him. I offered to buy the audiobook for him. He protested because he didn't want me spending my money on him, but I solved it with an "It's my money and you can't tell me what to do," and sent him off for my wallet. Turns out that because we'd purchased the Kindle book, the audiobook was only $4, so it was an easy solution. He can now go back and listen to the parts he didn't understand, and make use of his hours on the bus.

By this time it was 9pm though, and he still had a science assignment to do. This always happens on the days when I am ultra-exhausted. I didn't want him up working by himself, so I told him to bring it into my room. But by this time, he was tired and frustrated, and about shot for the day.

He brought in a worksheet full of charts to graph and formulas for velocity and acceleration. Kill. Me. Now. I started explaining, because apparently this teacher gives assignments before teaching lessons and wants the kids to figure it out and then come in the next day to see if they are correct. But I was tired too, and things weren't going too well. I'm talking him rolling around on the floor saying that the teacher sucks and this is so pointless and school is so stupid not going too well. Meanwhile, I'm narrating word problems, ignoring him, and trying to redirect whatever words have to be spoken to filling in formulas.

Man, I hate velocity and acceleration. Can't we just SLOW DOWN ALREADY?

He would have moments of pulling his act together, only to melt a few problems later. I was drawing question marks next to some of them, and he was worrying about how he was going to lose points. And I'm threatening to WRITE A LETTER.

At one point, I said to him, "Listen, Aiden, is this what it's going to be like for four years in high school, because this is going to be rough."

And then I thought to myself, "Are you kidding me? Four more years? That's all I have after this one? Son, you roll around and keep me up late with whatever you want. I'm here. Right here. We'll learn it all together. I got you."

So, we did it together. We'll do it again tomorrow, I imagine, like I did it with his brother and sister who grew up too fast.

And this is how I know he's growing. The next morning I got a text message from him that said:

"Heyy mom i just wanted to apologize for my irrational actions. I love you and i don't want to hurt u in any way. I don't know why i get so mad i just do. I'm sorry. I will work on it. I hope you can have a great day. Love youu."

Here's to late nights studying with my boy! And cinnamon rolls!
Posted by Jenna at 3:23 PM

Wow. That was like you came to my house and then wrote it down! They grow up so fast, yet those nights are agoniiiiiizing!

You really captured how much is required of these kids. I am all for learning, but sometimes the busy work makes me want to pull all of my hair out. I wish these teachers realized how much pressure they are putting on families when they assign out so much busy work. My son is taking a huge academic load this year, yet has to jump through some ridiculous hoops to complete a "senior project" independent study. You captured exactly what it is like for the kids and for the moms. Hope the work lightens for him!

Thankfully we haven't had any projects yet. But cinnamon buns sound like a good way to cope with it all.