Back to School Again

Another school year is upon us. The summer went by so quickly, I almost feel like it was a trick. A summer slight-of-hand. It was here, and now it's gone!

I'm not a huge fan of the kids going back to school. It's so lonely and I love having them around and not being a slave to a school district. I am, however, a fan of education, so that's the angle I take with the boys. Learning! Growth! Progress! Let's do this!

Since Aiden is attending a charter school this year, the schedules for the boys are not the same, even for the first day. So we had an extended back-to-school moment, sort of easing into things.

Conor started 3rd grade this year. I'm not sure how that is even possible. He started kindergarten the same time I started nursing school and now this has happened? 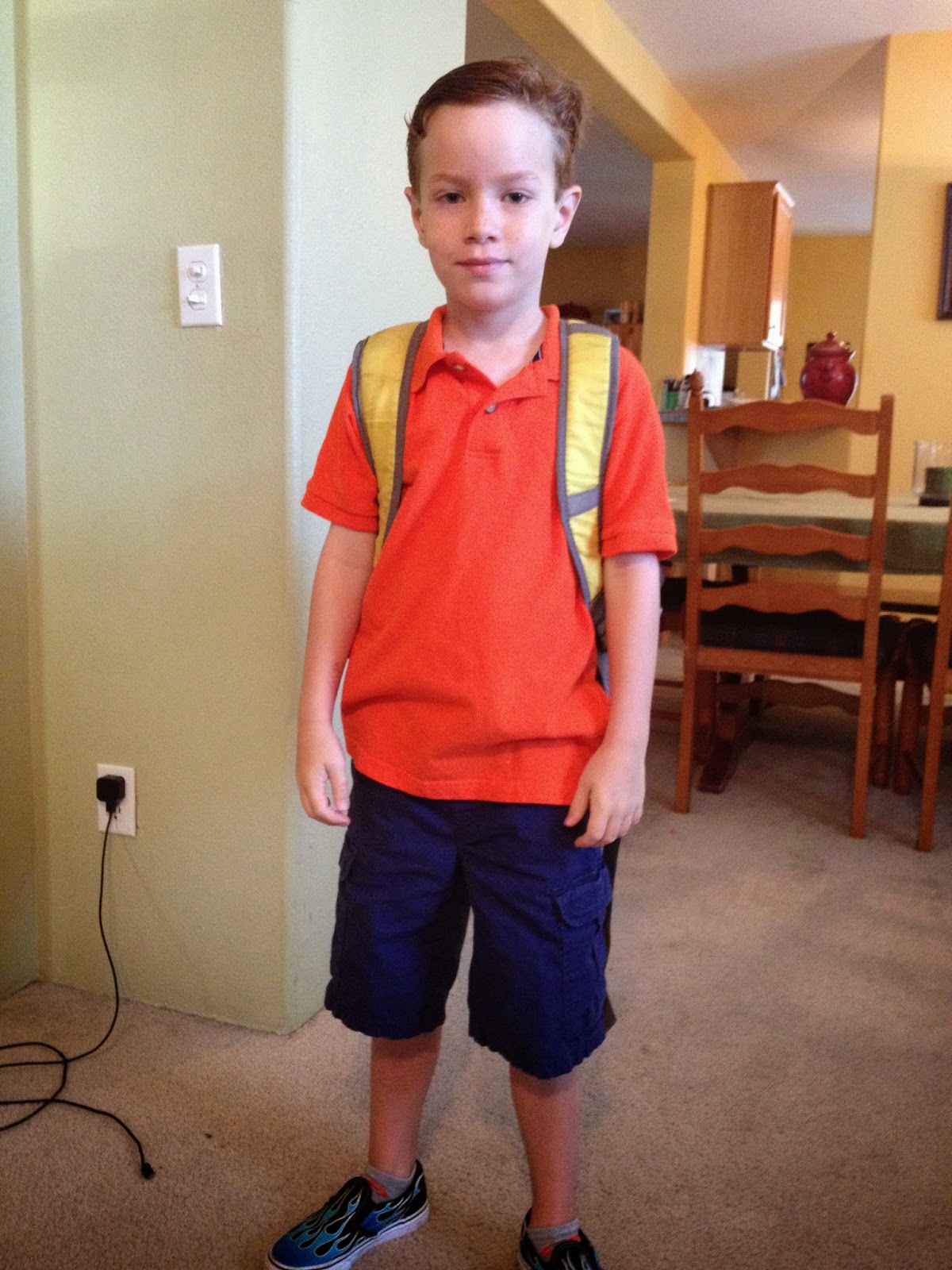 On the bright side, we're getting a 4th year out of that backpack! 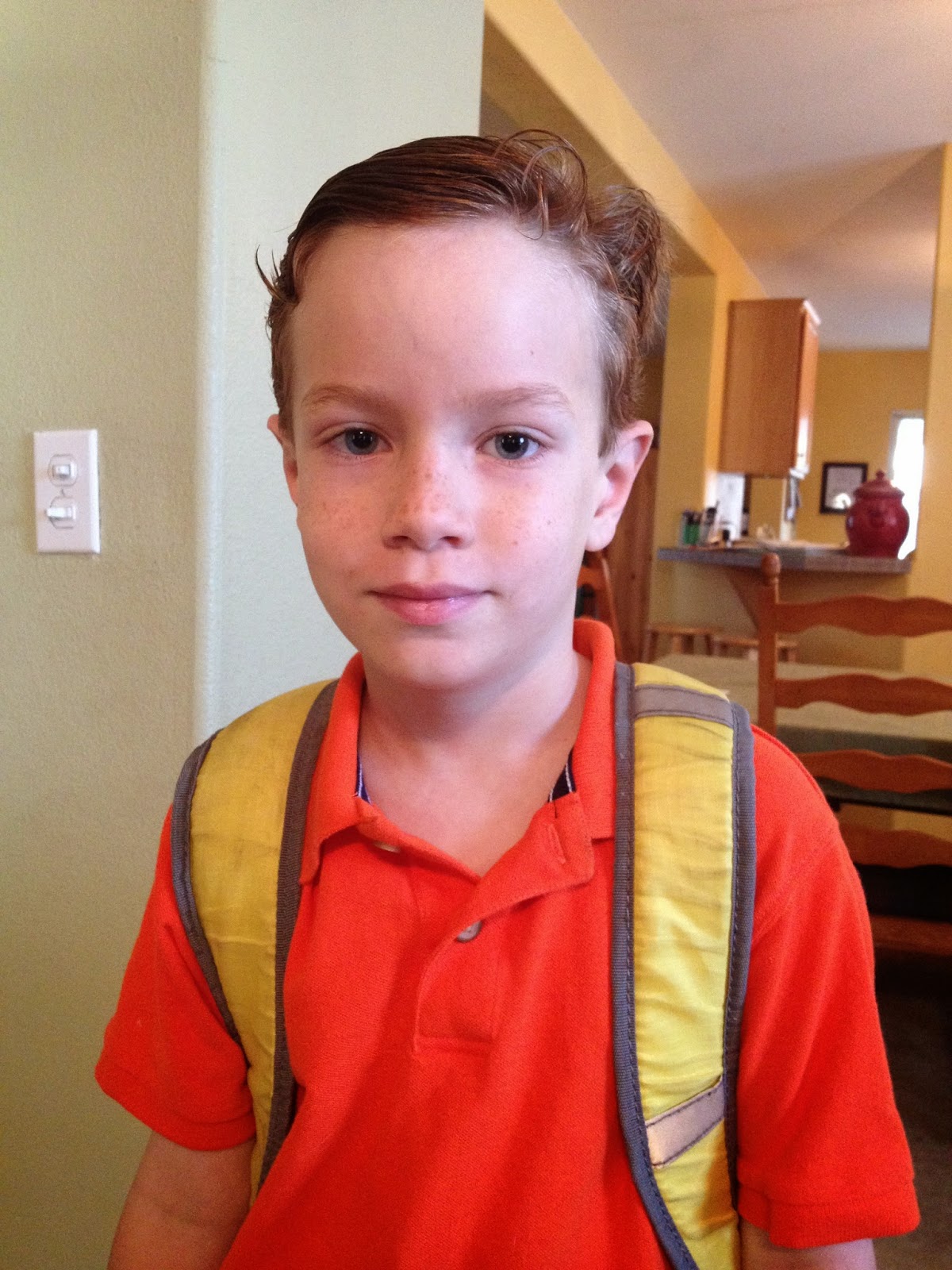 When I asked him what he wanted for his first day of school breakfast, he said strawberry-orange smoothies. I've never made those, so I'm not sure where that came from, and later he said he just made it up. Well, it worked out fine (except that Trop 50 stuff is weird. Not even 100% juice. Lesson learned there.) I used a ton of frozen strawberries, some Greek yogurt, a banana, and some orange juice. 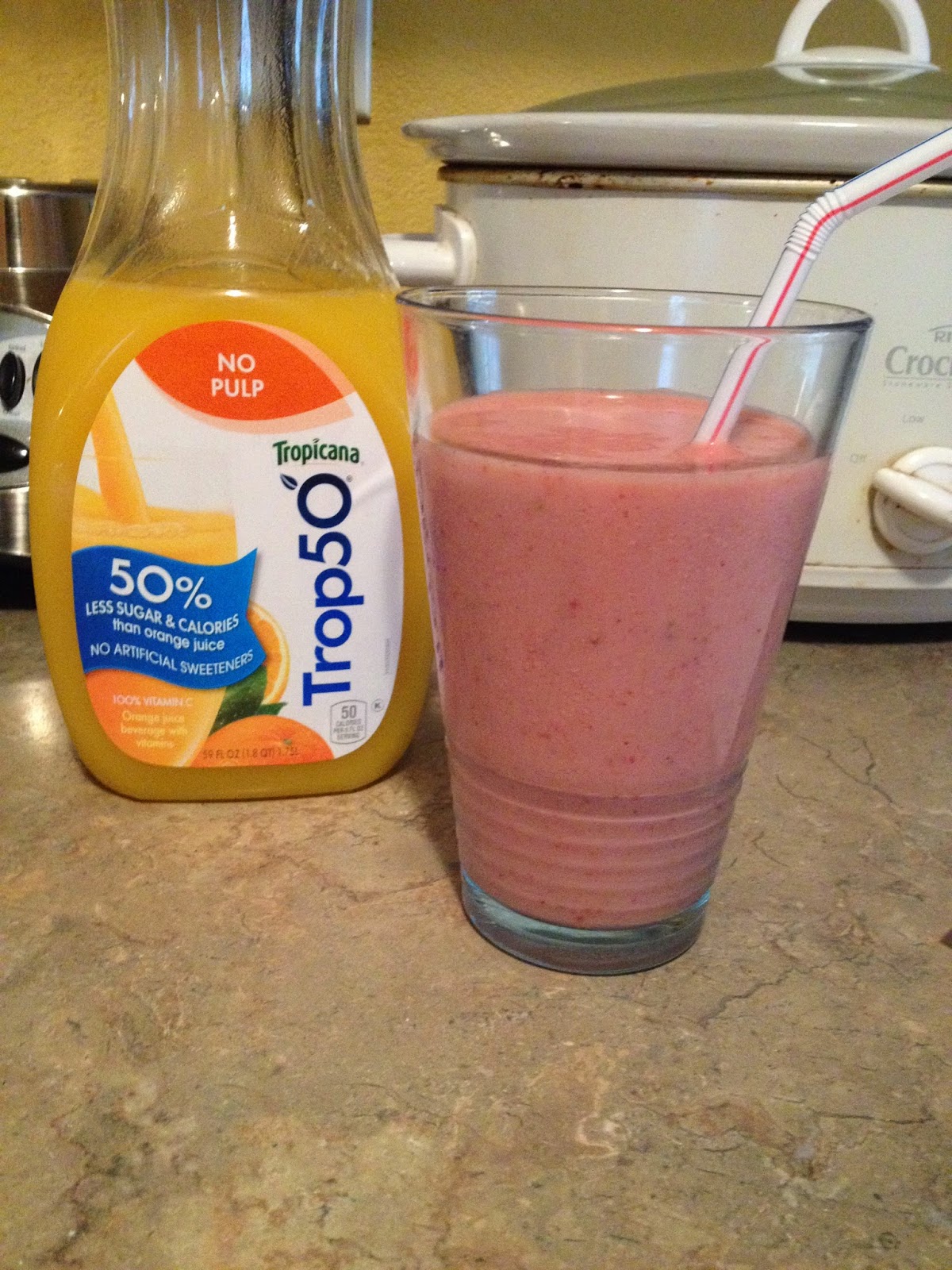 Aiden was sweet enough to want to walk with us to school, the school he also attended beginning in 3rd grade. In fact, Conor has the same teacher that Aiden had in 3rd grade. 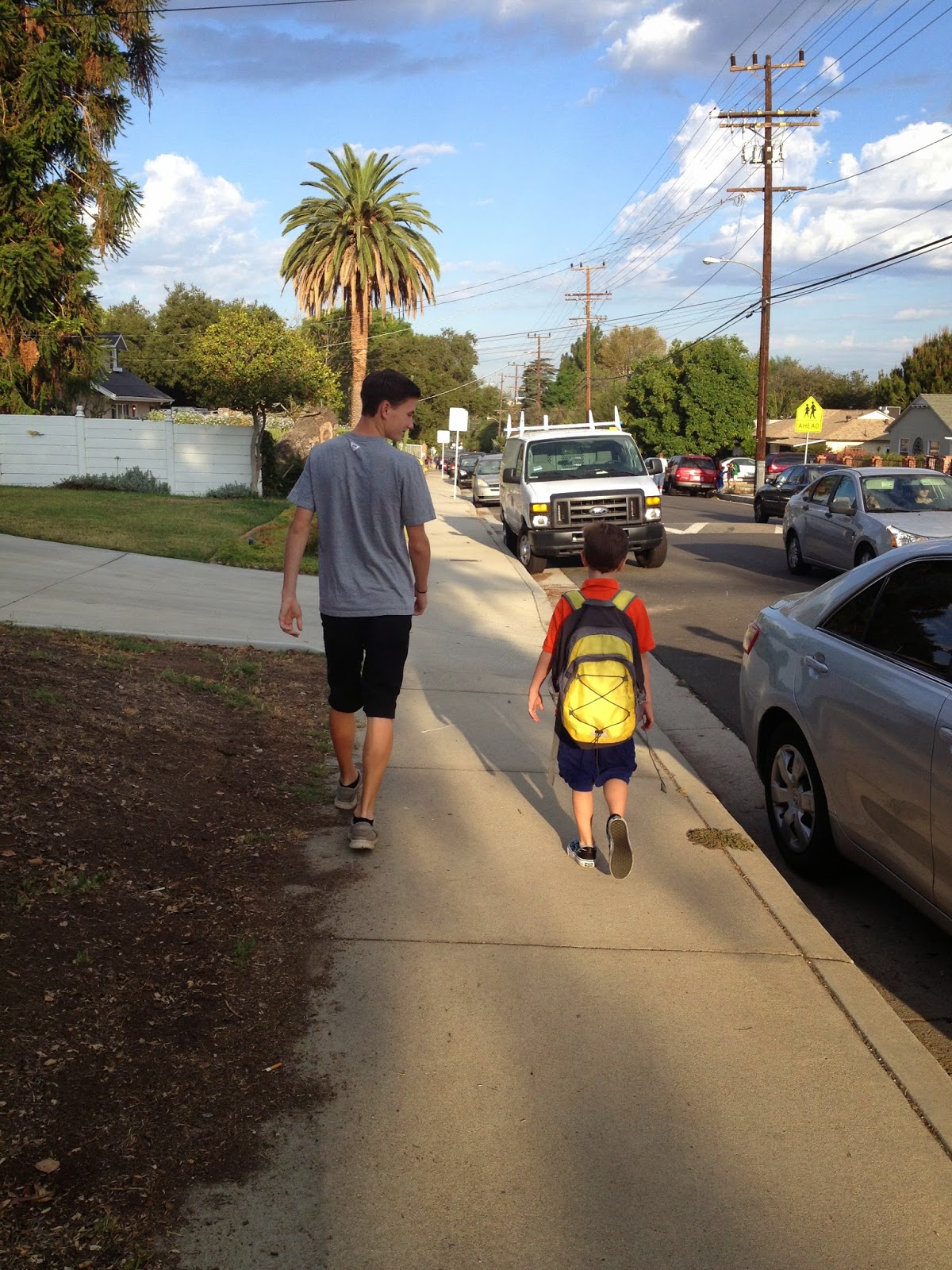 I got him to the right place on the playground, where he was first in line for his class. We waited for a few friends, and then I had to leave to take Aiden to work. Conor was fine though, so brave. What a difference from all those tearful partings in kindergarten! 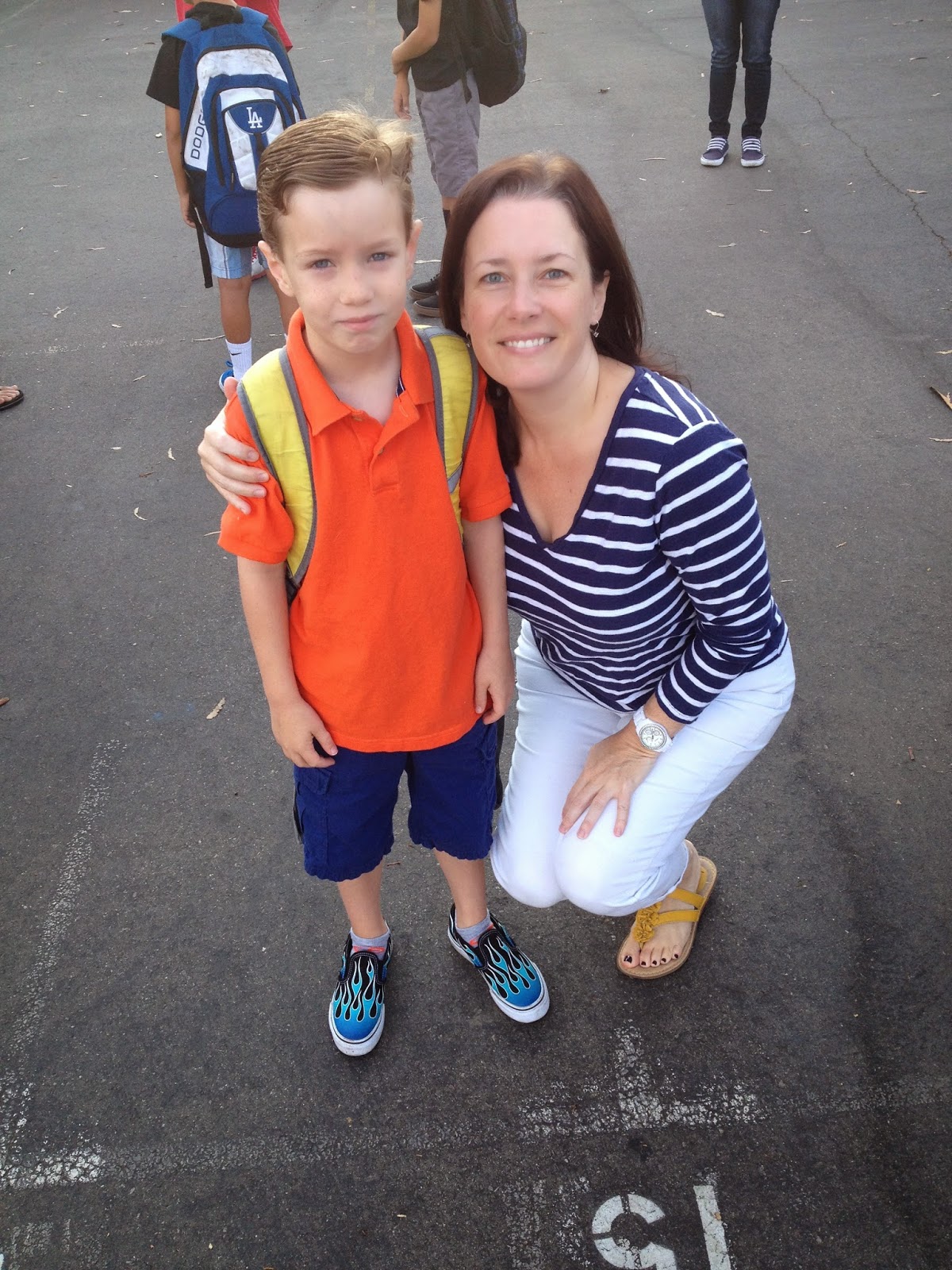 Aiden said he felt like everything was miniature at this school. Strange how perspective changes as we grow up! He was once a little guy standing in this same line! 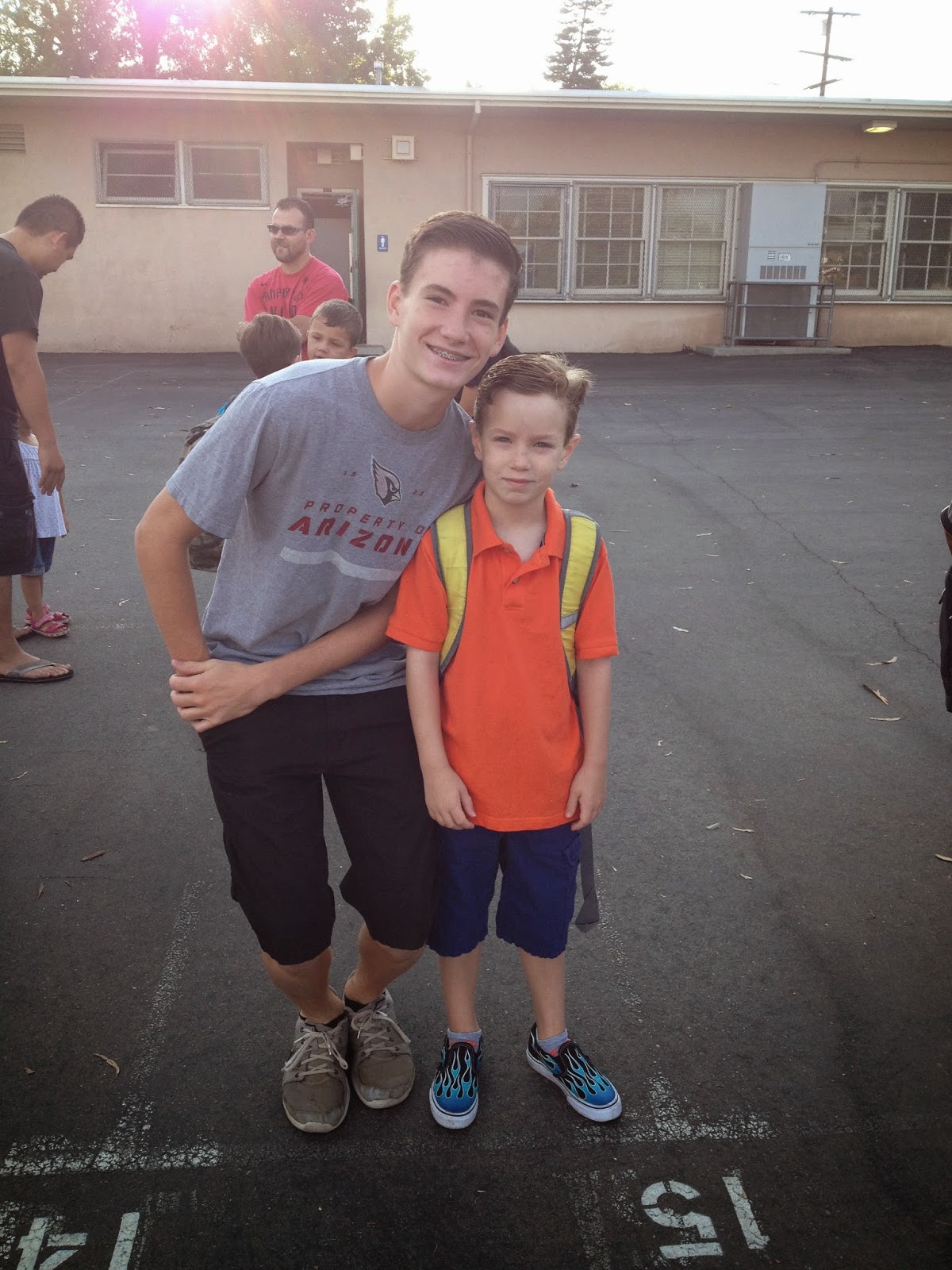 Aiden started early morning Seminary (a scripture study class held at 6am for high school students in our church) last week because most of the kids started school last week. Since he didn't, our routine was Seminary (which he gets himself up for and rides his bike to and from), Conor to school, and then Aiden out to the ranch where he's been working all summer. Then I would pick him back up around lunch time, he'd come home and rest for a bit, and then it was off to football until late in the evening.

Today, however, he started school. 9th grade. High school. I can't even believe it, except that I've been driving out there every day the whole summer.

He's going to a really great school, the largest charter school in the nation, actually. It's a bit of a drive, which has been hard, but most of his friends are going there since his middle school was out in that area too. 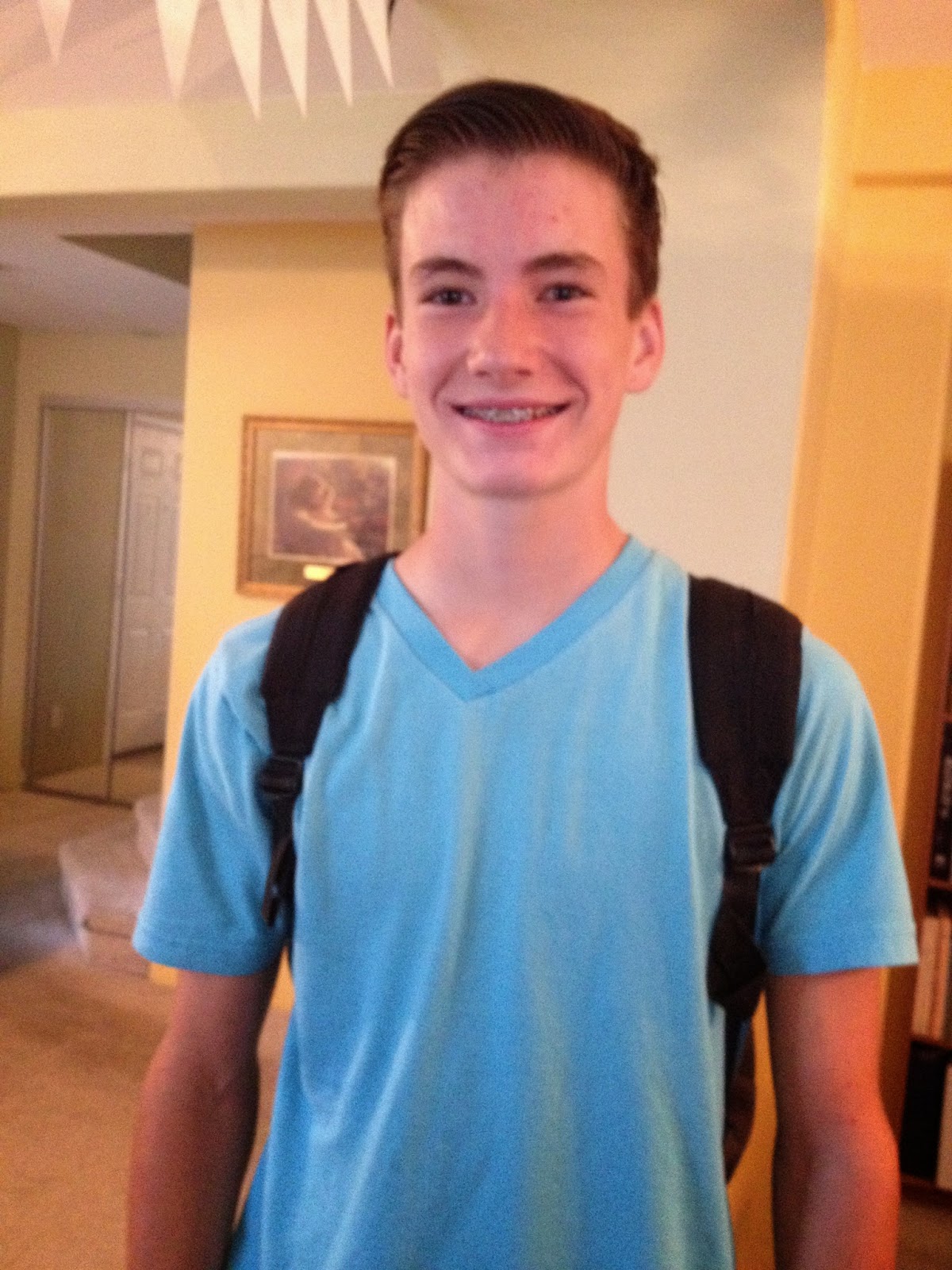 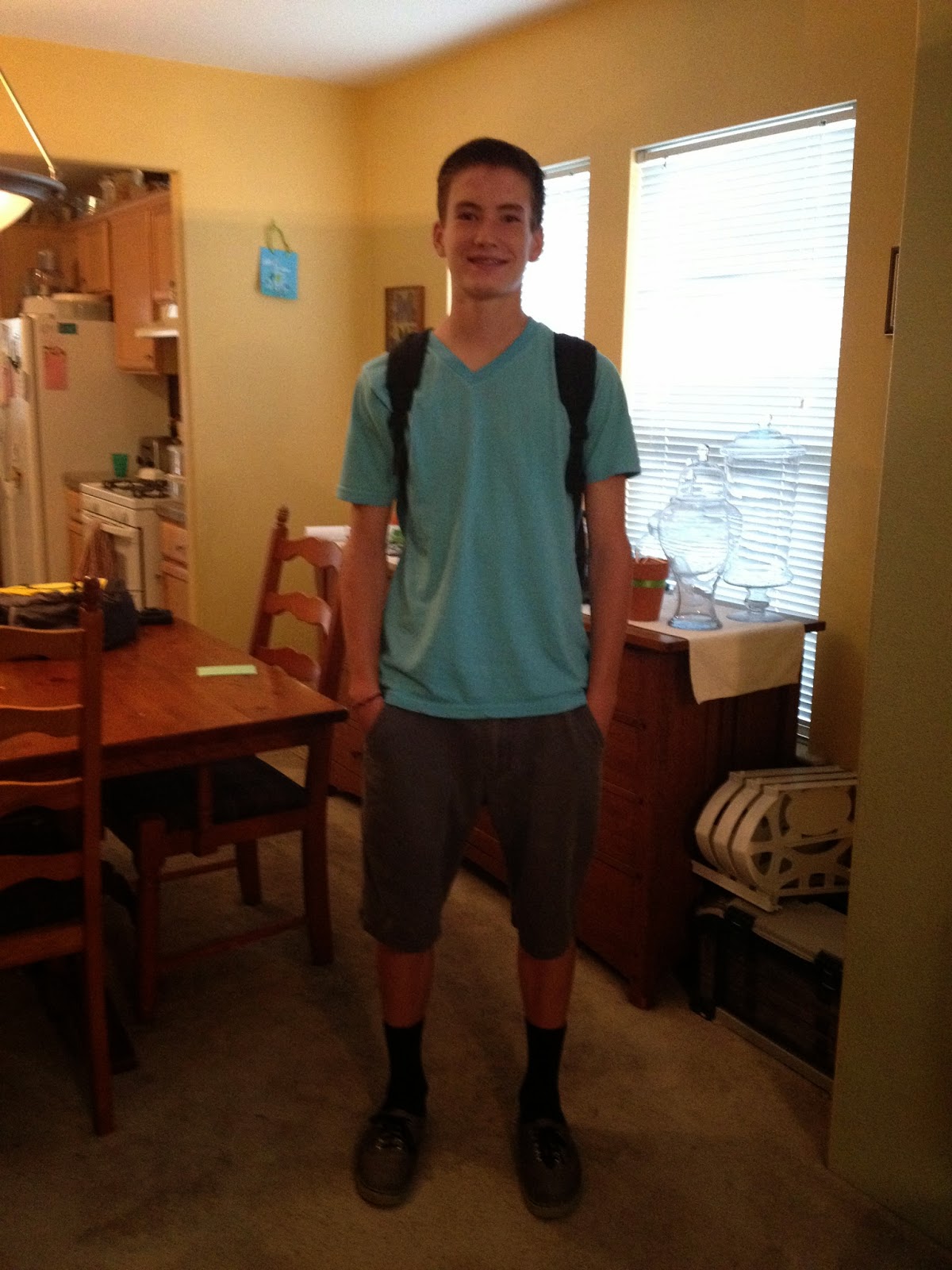 His back to school breakfast was a bit heartier: Whole Wheat Blueberry Pancakes. And a tall glass of milk and a banana. The boy can eat. 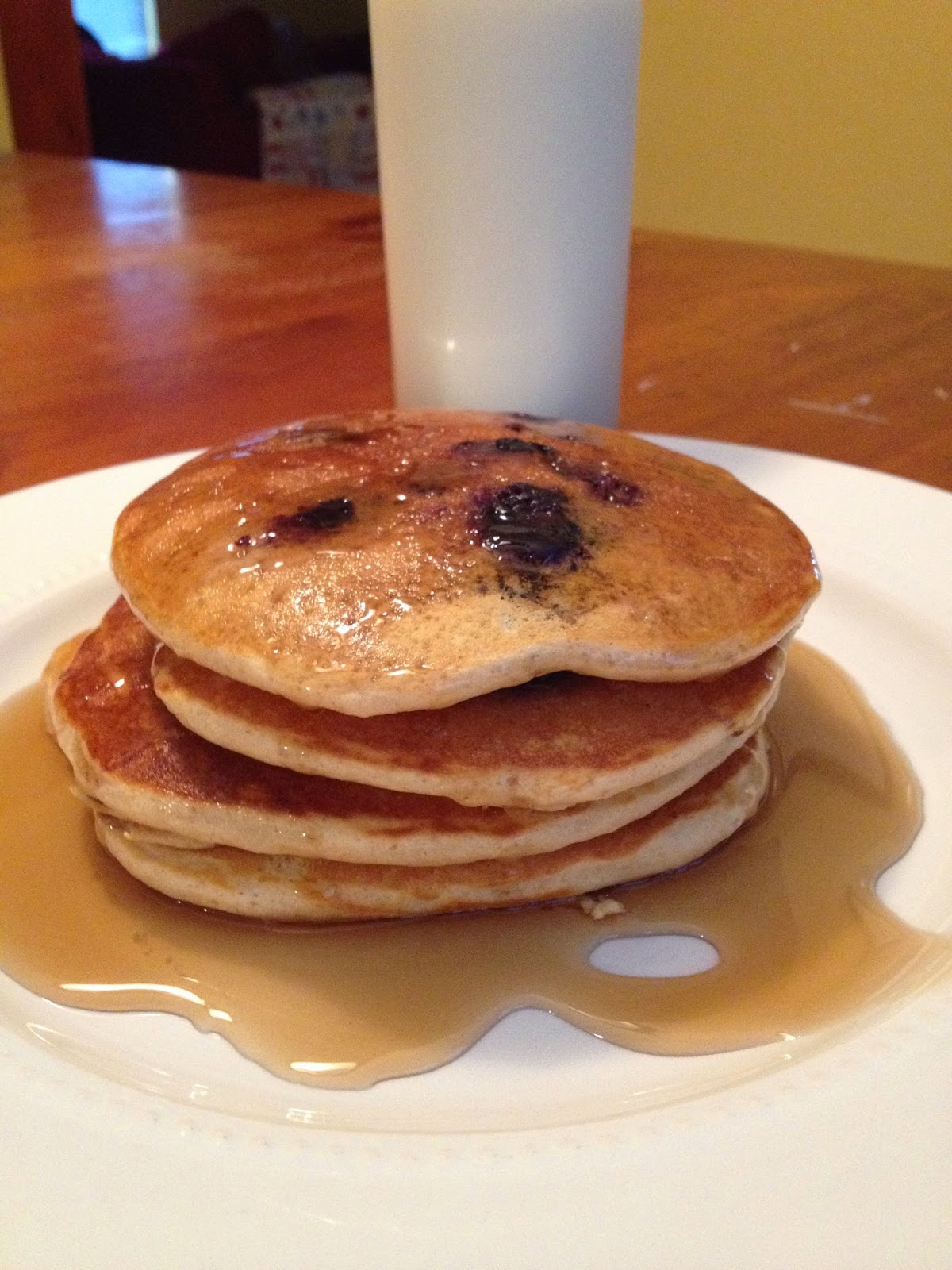 All morning I've been thinking about how strange the passing of time is. I'm sitting in the same house, with the same furniture, arranged in exactly the same way as when we moved in back in 2005. That was just a few weeks before school started that year, and Aiden started kindergarten.

We had five kids going back to school! Same house (with painted walls now), but so much has happened and changed. 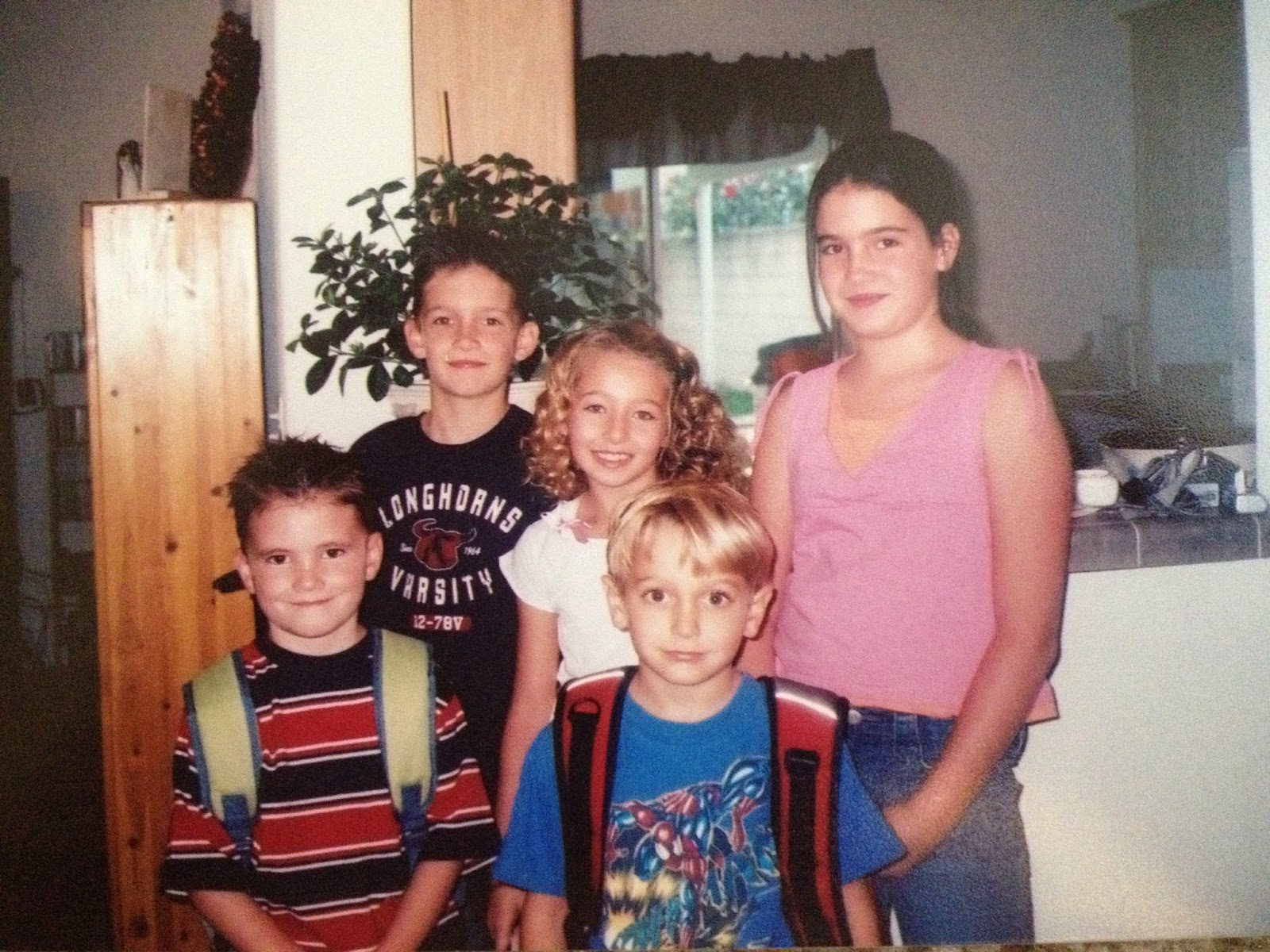 Here was my little guy on his first day of kindergarten. And today he started high school! 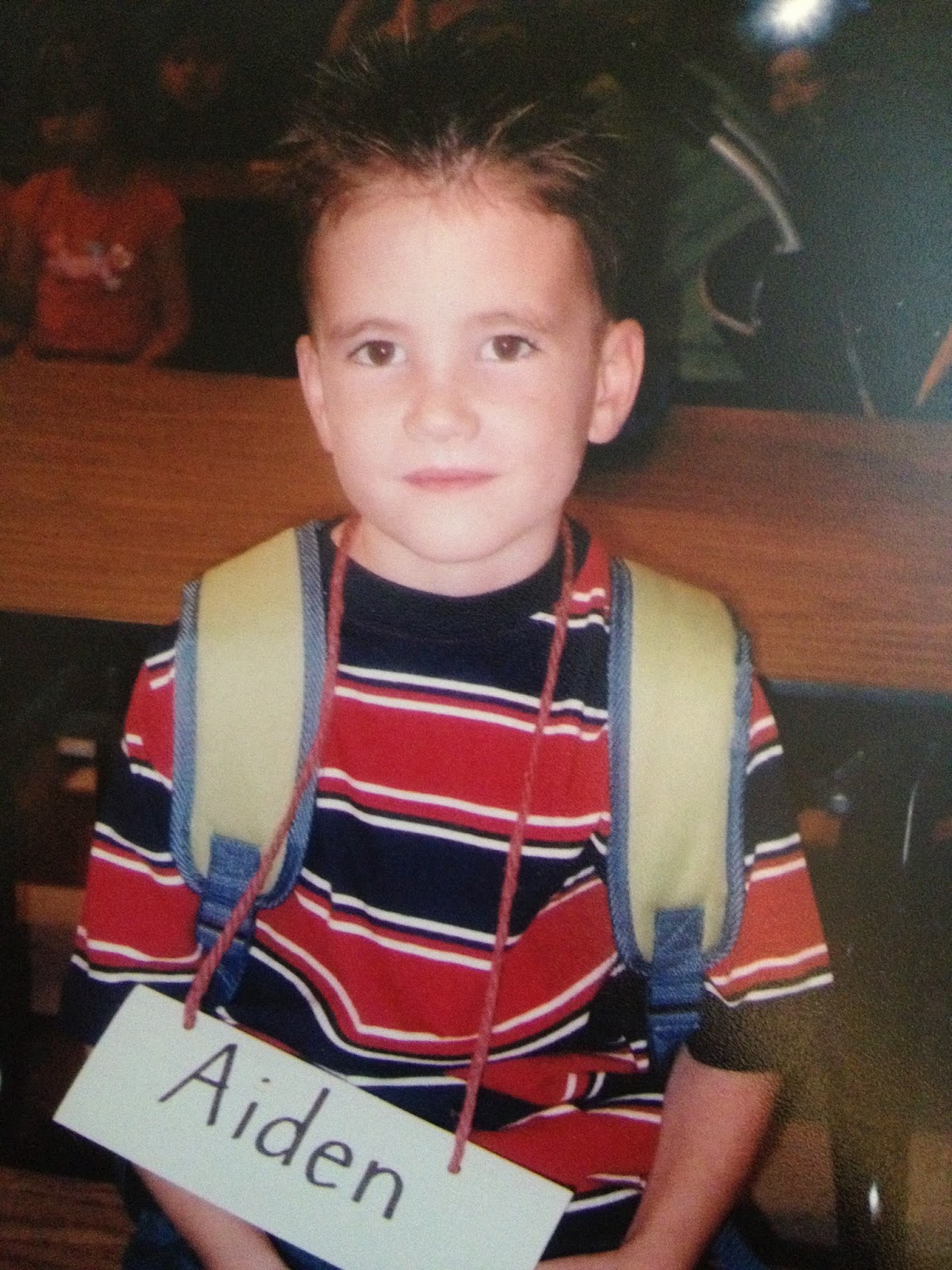 Here is a picture of the end of that school year. Lyndsay was being homeschooled, but the other four all attended the same school. It's so strange to look at that picture, which I remember taking, and realize that three of those kids are in college now and the other two in high school! 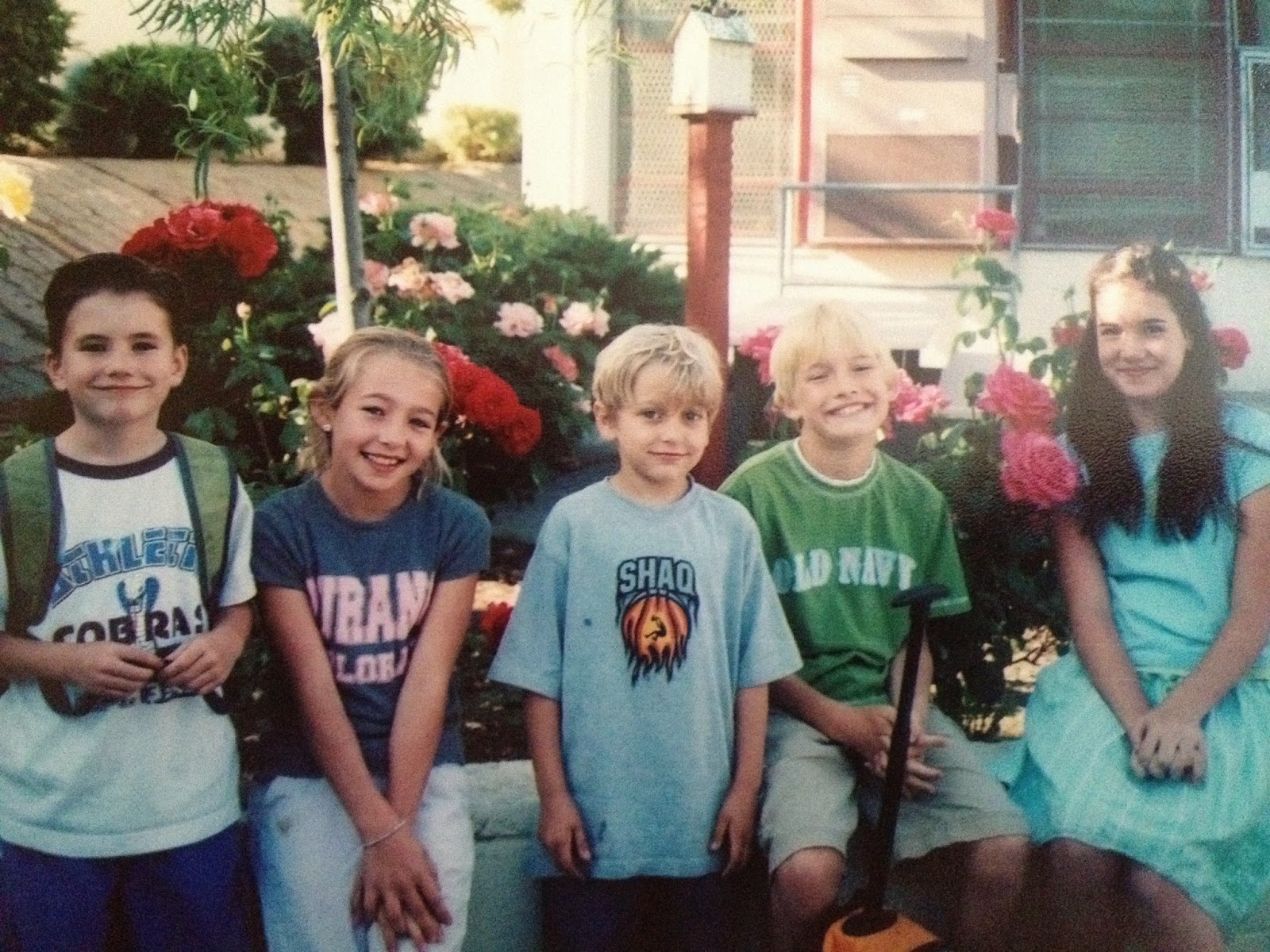 And here I am with my little Aiden, and Conor growing in my tummy. These are the only two I have left in my nest. Life is a trip, man. 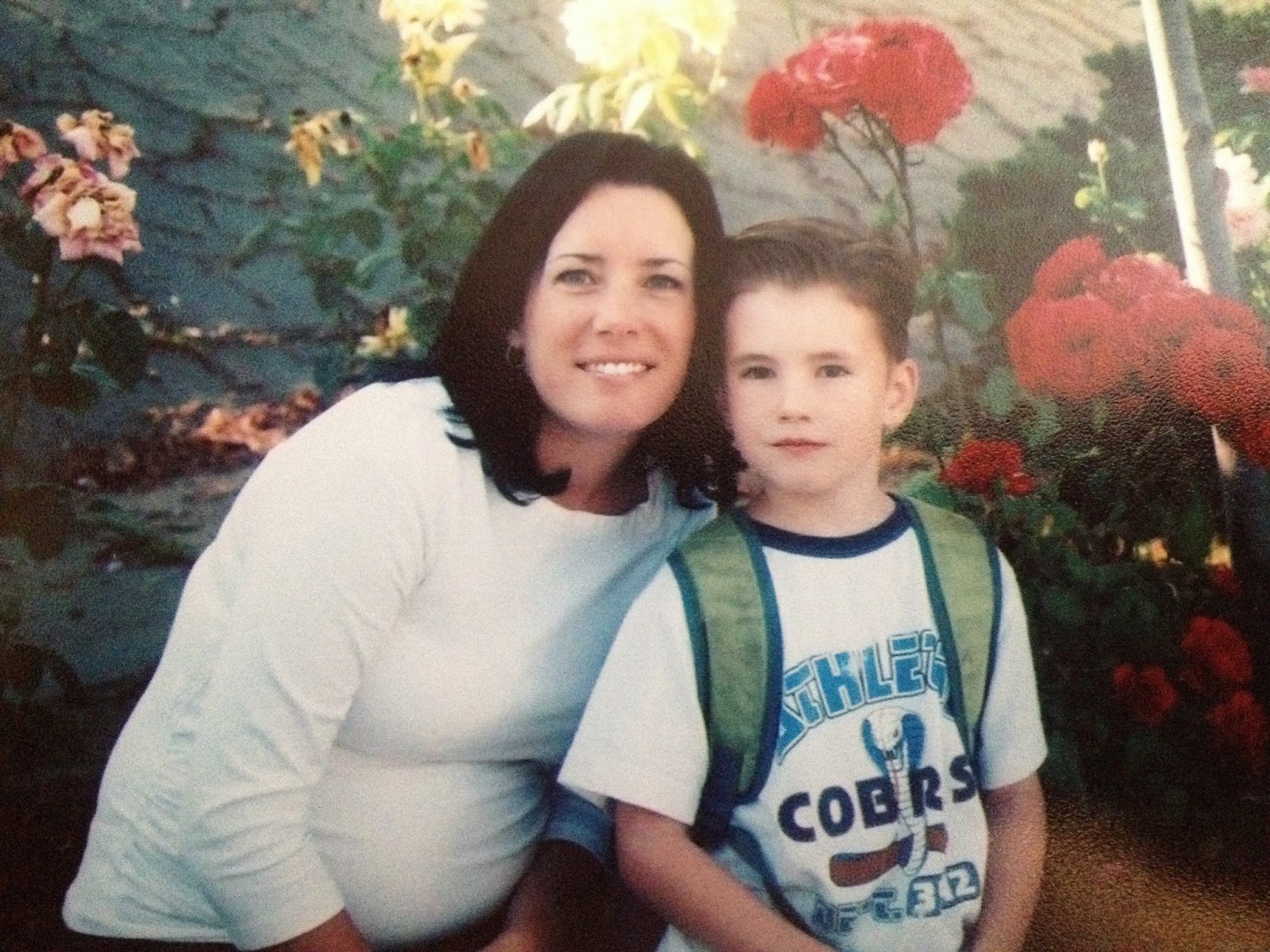 So much has changed. We've been through so much. Each of these kids has experienced so many things since these older pictures were taken. I miss those days of innocence and relative ease. Life, ironically, seemed simpler then. We keep plodding along, doing the best that we can. Now I'm a working mother, which adds its own degree of complication to life. The race I run at this stage feels more strenuous then it did back then, but I'm grateful for the learning, the growth, and the progress.

Here's to an excellent school year!
Posted by Jenna at 8:49 AM

Labels: Aiden, back-to-school, Conor, motherhood, To be me