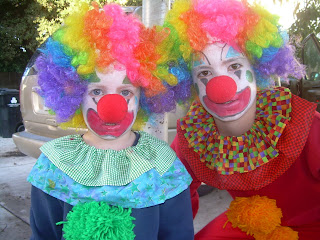 Conor and Aiden as clowns 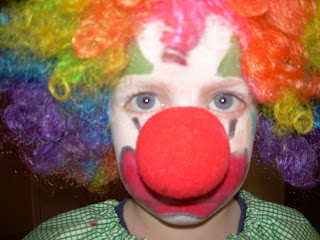 Clown noses should come in sizes, no? 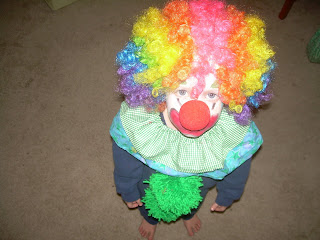 We did consider just spray painting his real afro in rainbow colors, but he really wanted the wig. 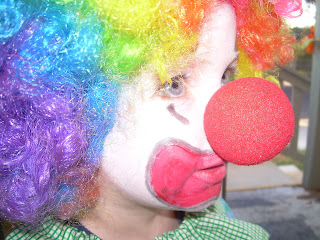 And his blue eyes add a nice touch. 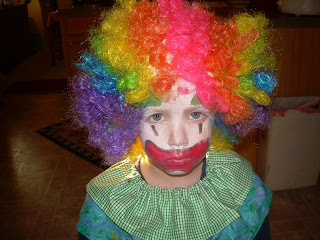 A bit sick of the pictures? Ready to go get candy? 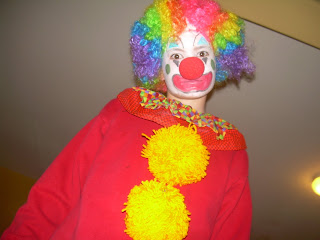 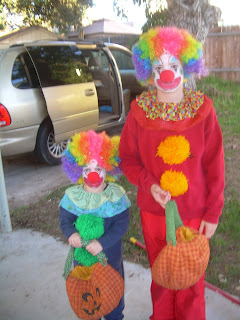 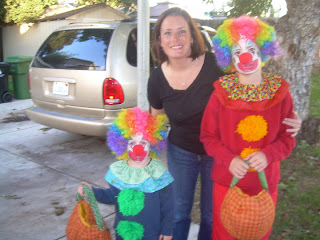 This year, with Halloween falling on Sunday, we did things a little differently. On Saturday the kids got dressed up and we went to our ward's Harvest Festival. There was a dinner, various booths and games, and of course, the Trunk-or-Treat. This counted as the kids' Trick-or-Treating, and they did just fine. Even Dylan, who refused to dress up, was still able to bum a backpack-full of candy from the activity. 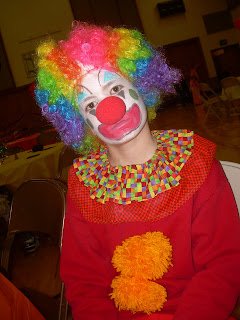 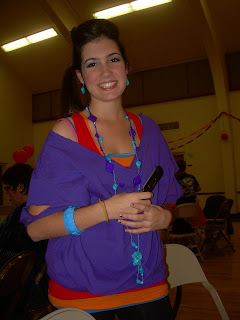 Lyndsay as an 80's girl again. She had to go work at a Halloween office party for a friend of mine, but she came to the Harvest Festival for a bit. 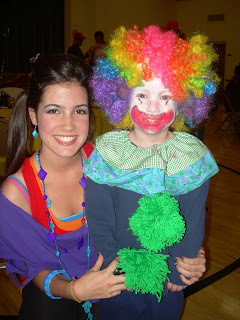 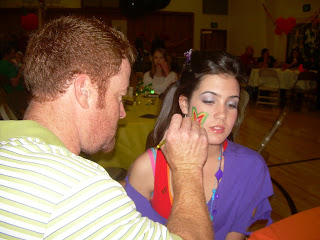 Several of the kids got in on the face-painting fun. 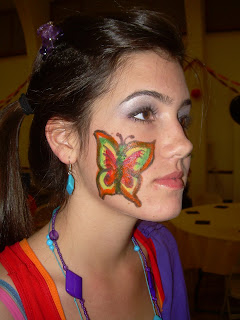 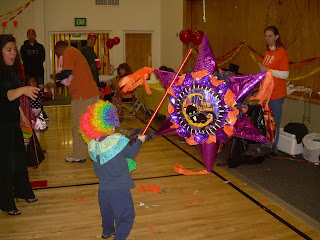 There was a pinata for the little kids, which Conor loved. 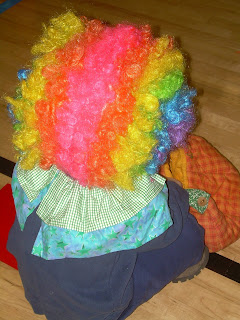 I thought it was cute that after he had his chance to whack the pinata, he sat in a little rainbow ball on the sidelines, waiting for his turn to go gather up the candy. 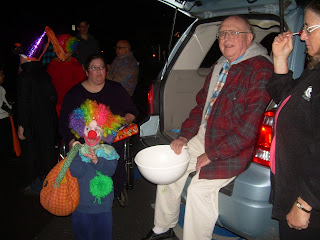 Conor's favorite part. They really loaded up too. The parking lot was full of cars, and the kids just keep going around and around until everyone is empty. 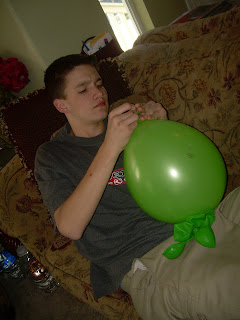 On Sunday, after church, we had a whole family Halloween party planned. First I made this incredible soup with some Italian bread for lunch while Dylan and Aiden (our decorating committee) got to work decorating. We just used the streamers and balloons I had on hand, so the colors weren't especially Halloween-ish, but when we had our planning meeting earlier in the week for suggestions, it was Conor who said, with his pointer finger in the air, "I think there should be balloons at this party!" And so, even green and blue, we had balloons. While they decorated, we watched It's the Great Pumpkin, Charlie Brown. 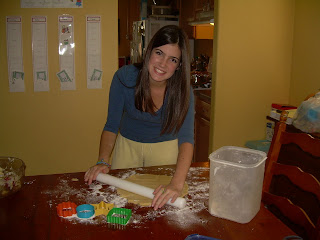 Lyndsay got to work baking the sugar cookies. We had to try out Mel's "Favorite Sugar Cookies". This is also when I realized that I must have gotten rid of all of the old Halloween cookie cutters, thinking I'd buy new ones, and never did. So, our cookies weren't especially Halloween-ish either, but they were still tasty. 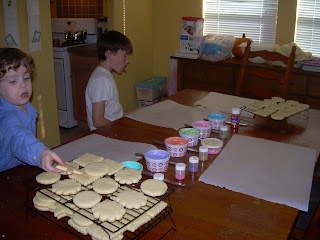 After the cookies were baked, we mixed up the frosting and tinted it in various colors, and got out all the sprinkles stuffed in the back of the cupboard. 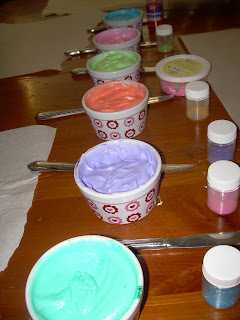 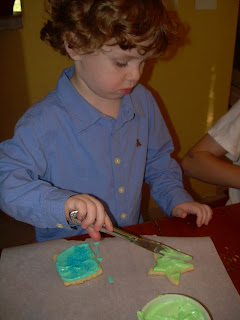 And we all just sat around and decorated cookies! It was fun! 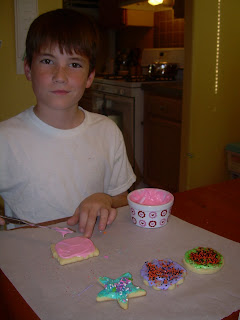 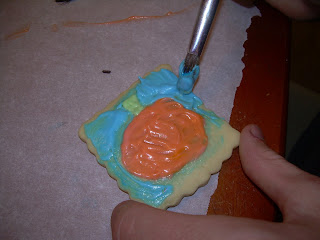 Dylan, who turns out to be something of a cookie artist, took things very seriously. Paintbrushes and everything. 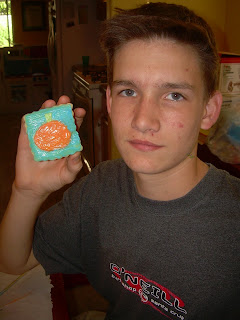 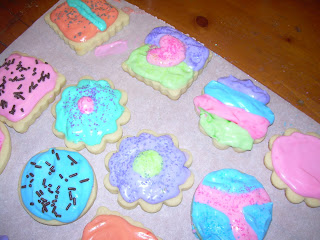 Lyndsay's creations. After the cookies were decorated, we plated many of them and delivered them to neighbors. 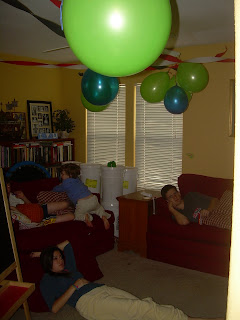 After cookies, we gathered for another movie. We watched Lady in the Water. 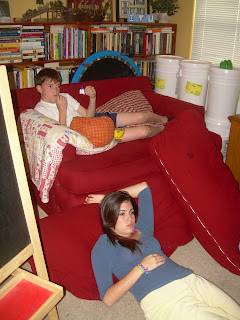 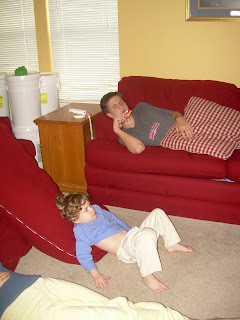 Not sure if this is a good thing, but Conor loved that movie.

After the movie, we went out to the carport and played the Donut on a String game, where we all raced to see who could eat a donut hanging from a string with no hands. You know the one. We videotaped that one, so no pictures. Which makes things even more interesting, because shortly into the game, I laughed too hard and aspirated on a chunk of donut, and though Lyndsay took a quick sec to slap me on the back, the boys just kept on eating, seemingly grateful for a definite distraction to aid their win. Indeed, Dylan won. And eventually, I was able to cough up that chunk of donut and come in last place. 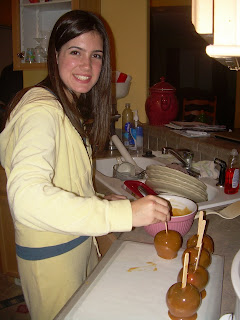 I made cheeseburgers for dinner, and while I did that, Adam unwrapped 15 million caramels. We melted them down and the kids made caramel apples. A fave. 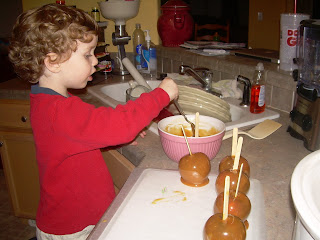 Speaking of Conor, throughout the night, as Trick-or-Treaters came to our door, he loved giving out the candy. He waited on the porch for them, and called out to them, even if they'd been here already. Inside during slow periods, he wondered aloud when more "customers" were going to come. And when finally a knock on the door came, he ran to answer yelling, "We have customers!"

When that candy was gone, we put Conor to bed, turned off all the lights, and the big kids sat in the livingroom while I read them a scary story I'd found on the internet. And then, we moved to the family room to watch the original When a Stranger Calls, with Carol Kane and Charles Durning. That one really got to Lyndsay, who knows all too well how scary it can be to be alone in someone else's house at night while babysitting.

The party ended around 10pm, everyone happy, a bit spooked, and tuckered out. It was a great way to spend the day together. So much better than just Trick-or-Treating. And I bought plenty of candy for us too.
Posted by Jenna at 7:50 AM

That sounds like so much fun Jenna and I absolutely love how Conor called them "customers". How friggin adorabel is that!

I'm in awe that you fit all that fun into one weekend.
Great ideas.

Looks like it was alot of FuN!!! The cookies & caramel apples look delish! Great job on the clown costumes!