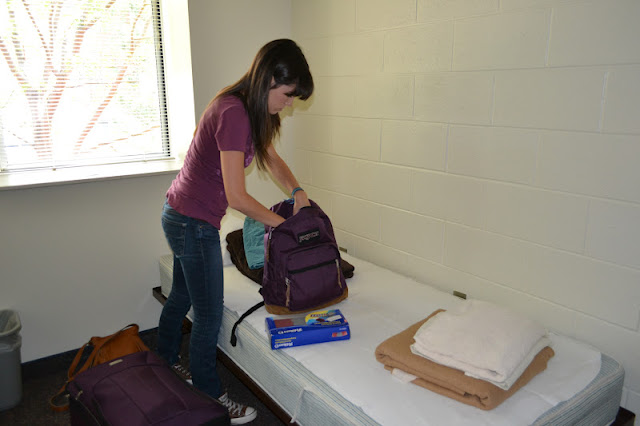 On Thursday morning, Kelli woke up early to make us Lemon Poppyseed Pancakes.  They were delicious.  Lyndsay barely touched hers.  She was a bundle of nerves.  This would be the day that she was to officially check in as a student at BYU.  We left with plenty of time to find a parking spot.  Had there been one.  After circling the Cannon Center a billion times, and watching the clock tick ever onward, I finally dropped Lyndsay off in front and told her to go get checked in and I'd keep circling around.  This was her check-in for the Late Summer Honors Program, a week-long class for a select group of only 120 or so students.  Yes, she would earn one credit for the class (she had selected an art class about Illuminating Sketchbooks and Journals) but more valuable we thought was the chance to have a week on campus to get used to things before the real semester began.  But now it was here, and she wanted to go home.  Knees knocking, and both of us on edge, she got out of the car and walked into the Cannon Center.  There were other kids and parents walking through the parking lot, and oddly enough, two from our Stake back in California!  The odds!  I kept fruitlessly looking for a parking spot.  Education Week had completely taken over the campus.

Finally, I got a call on my cell phone from her, and I met her around front again.  She had a bundle of books and art supplies in her hands, and a smile on her face.  Her binder had been personalized for her, and there was a whole schedule laid out for the week's activities.  She told me she'd "signed up for everything."  Awesome.  She had a t-shirt, a text book, a new sketchbook, some primo watercolors and brushes, and a few other supplies.  She was extremely relieved she was not taking the Machiavelli class that another girl in our Stake was signed up for.

We found her dorm room, which would only be her dorm for two nights before she could move into her official fall dorm.  I parked illegally in a handicap spot and we ran like mad with the few things she would need for two days into the building to get her settled in. 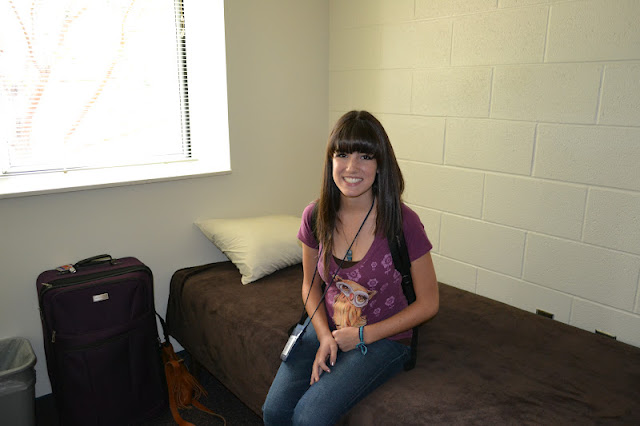 I made up her bed for her (her full bedding set we left with Kelli) and I tucked a note under her pillow.  Then we ran like mad back to the van and got out of there, moving to another lot where I could park and we could head over to her Honors Orientation.

Slight detour here: On the drive up to Utah on Tuesday, I got a frantic call from someone in the RN department at my college, telling me that I was required to have another background check and fingerprint clearance to satisfy the requirements of the psychiatric clinic I would have my rotation at, and that my appointment was for Friday at 10am.  I explained to the woman that I was out of state and would not be back until Friday night or Saturday, but she was unmoved, telling me that it was mandatory and I would need to find another way, or choose another clinical site.

She put me on with the Dean.

I explained again.  The Dean was much kinder and more understanding.  She told me to just enjoy the time with my daughter, that this was surely a problem that could be resolved, and that I shouldn't worry about it.  So I didn't.  Until Thursday morning when I got an email from the school saying that there was no way around it, I had to have my fingerprint clearance done by Friday morning, but maybe I could have it done at a location nearest to me?  There happened to be a location on BYU's campus, so after settling Lyndsay into her dorm, and in the 25 minutes we had before her orientation started, we went over to that building to see what could be done.

Basically, nothing.  Though the company was a national clearance center, fingerprints can not be shared across state lines.  Whatever that even means, as it seems a huge contradiction to me.  But there it was.  It was Thursday at 10:50am, and I had to be back in California in less than 24 hours for this stupid procedural minutiae.  (We'd already had background checks and fingerprint clearances done, but this facility wanted them done again.)  My plan had been to spend the day on campus, with my textbooks in the library, just enjoying the atmosphere.  We figured Lyndsay could check in with me later in the day, and tell me about how things were going.  We planned that I would come up to campus in the morning and have breakfast with her before getting on the road to come home.  And suddenly, it became apparent that I was leaving right then.  Leaving my girl.  A huge knot formed in my stomach.

"Oh my gosh, Lyns, this is it, " I said, tears forming.  "I have to leave.  I am so, so sorry."  We hugged tightly and I just sobbed and sobbed.  "I love you so much and I'm so proud of you, my girl."  She told me how much she loved me too, and that she understood and would be okay.  I looked up at her and took her face in my two hands and just wanted a second to memorize that sweet face that I wouldn't get to see again for months.  Oh, my heart ached, especially for the suddenness of the departure.  She went into the auditorium of the Maeser building and found a seat next to some girls that complimented her on her "cute shirt."  I put my head down and walked back down the stairs, out the door, and across campus to my car, crying the entire way.  I was leaving her, and it was. So. Hard.

I sat in my car and scrambled my brains trying to figure out a way to stay.  Should I just change clinical sites?  Would they really make me if I was just one day late?  But the feeling I had said, just go.  It was torture saying goodbye.  It will be torture tonight, and torture tomorrow.  You've done it, so just let it be.  Besides, the sooner she realizes she's really on her own, the sooner she'll assimilate and make new friends and begin the adjustment.  I knew it was right, though I hated it.

I had a lunch appointment scheduled with a dear friend at noon at a little cafe in Provo.  Annette Lyon and I have been online friends for years, but had never met in person.  I was so excited for the chance to connect in person with her, as I've admired her for so long.  I got there early, and sat in my car trying to compose myself.  She arrived right on time, looking radiant, as I knew she would.  And, as good friends do, she got all teary with me as I told her of my aching heart, having just left Lyns at BYU.  She is already feeling the pain of her oldest son growing up and getting ready to leave the nest.  We commiserated, and it was like we were the oldest friends.  We had delicious salads and opened our hearts with one another as if we were just picking up from where we'd last left off.  A soul sister, she is.  What a privilege that our paths have crossed.  She was a delight, and I easily could have spent hours just sitting and sharing with her.

Unfortunately, I had to get on the road. 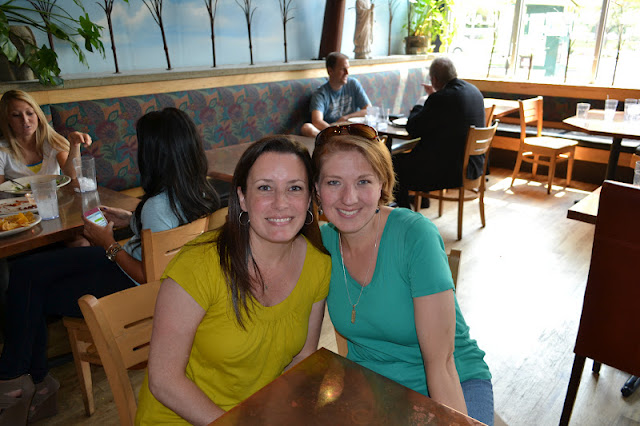 My van was still full of the rest of Lyndsay's things, so I headed back over to Kelli's house where I'd be unloading them into her car until she could take them down to campus on Saturday night and help Lyndsay move in to her fall dorm.  Then the real adventure began.  I'll tell that story tomorrow.

(Incidentally, Kelli lives directly across the street from where the new Payson Temple is being built.  That will be such a wonderful view for her family!) 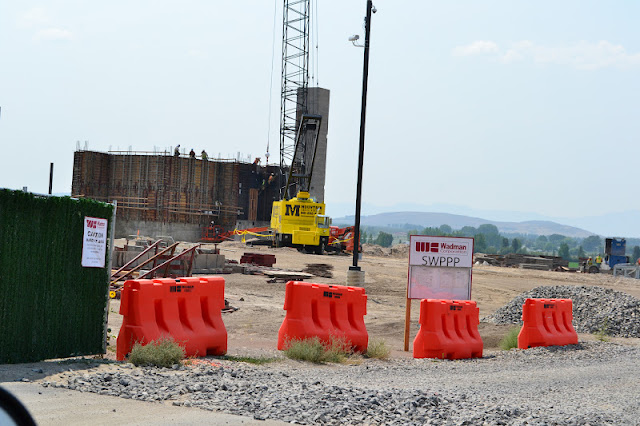 Ah, it hurts my heart. But it's all for the best! I love the photo of my two angels. I'll have to download a copy of it for myself.