I'm hardly ever grumpy. Seriously, hardly ever. I try very hard to be cheerful and upbeat, and to look at life in an optimistic way. But everybody has their days.
Conor's birthday (before the celebration part) was one of those days. Besides the cake I made for Conor, I also made a cake that day for one of my very good friends. She didn't ask me to, but her birthday was last week, and she mentioned that it was a great day except for the fact that she didn't have a cake. And she loves cake. I love her, and she does so much for me that I wanted to do something for her. So, I figured, I'm making one cake, why not two? (Who do I think I am? Hannah?)
I baked all four chocolate cakes the night before so they could rest. I made a batch of marshmallow fondant and sealed it up so it could rest. And I had this really cute idea in my mind for my friend's cake, but it required brown. Well, I didn't want to dye a batch of fondant brown, cause that seemed weird. If it's brown, it should be chocolate. I didn't have loads of time to go find a cake store, so I searched online and found a recipe for chocolate rolled fondant, and I figured, 'Sure, I can do this.' So, with the help of my trusty assistant, Lyndsay, we were up late making homemade chocolate rolled fondant (which I will never do again, because Holy Cow), and then we covered that all up to rest. The food seems to get a lot more rest than I do. I went to bed that night feeling very excited to do the decorating. All my ducks were in a row, and resting.

I started bright and early on Conor's cake. Lyndsay makes all the colors for me because my hands and wrists hurt from the kneading, so she got to work covering the cake with fondant and making the waves. . .there was some frustration and do-overs with that, but we're amateurs and we expect that. . .and I got to modeling the baby out of gumpaste. With the second layer of waves being irksome, I could tell that Lyndsay was losing it. I told her everything would be fine, and not to worry, to which she replied:

"Well, you're just so stressed out that I feel like I'm tip-toeing around you."
Wait, what?
"I'm not stressed, Mom. I'm only reacting to your stress."
Well, I'm reacting to yours, because you're over there huffing and puffing, and I always feel like I'm tip-toeing around your moods.
"Well, I'm just trying to stay out of your way so you don't get mad."
Well, I'm just trying to stay out of your way!
A stalemate.
So, then I had to explain to my daughter that I am entitled to be stressed out sometimes and that it is not her responsibility to cheer me up or overcompensate for my grouchiness. For heaven's sake, I pointed out, I dodge her bad hair days, hormone days, and nothing-to-wear days constantly. I just let her alone and leave her to work it out. So, can I be a stress case sometimes too? Okay, she understood that. Although up till that point I didn't even really feel stressed. 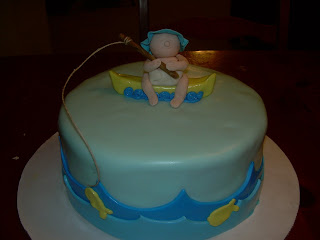 Then came the second cake. We worked that chocolate fondant and rolled it and lifted it and placed it. . . and it tore. Six times. I was madder than a hornet. I wanted chocolate fondant with pink flowers! Pink and brown are her favorite colors! That's how I wanted it! But that stupid chocolate fondant just would not cooperate. And I was sick of figuring this whole stupid cake thing out by myself with no one to tell me what I'm doing wrong and how to do it properly, and I just wanted to cry because in two hours she would be here with her son for piano lessons.

Finally after about an hour and a half of failed attempts to cover the cake with chocolate fondant, Lyndsay had a clear-headed idea. "Mom, what if we cover it in pink fondant with brown flowers?"

But flowers aren't brown, except dead ones.
And then she said, "It would be a better idea if you'd been the one to think of it, right?"
Oh, crap. 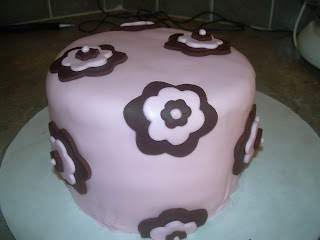 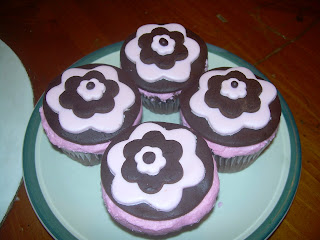 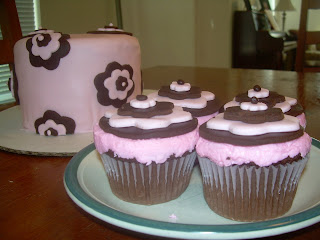 Well, fine, she was right. There was really no other choice. So, that's what we did, and the cake turned out well, and most importantly, my friend was delighted and thrilled. 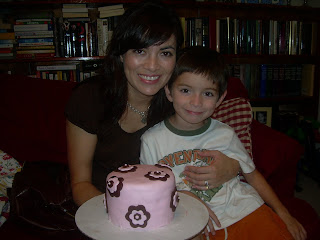 After a few piano lessons I cooked dinner. We had Adam's kids here too, which we do less frequently these days. The kids were all having a blast together, dinner was great, the party went off without a hitch and as the kids were getting ready for bed, I asked Adam how he was, as he had been strangely quiet.
"I don't know, how are you?" he said.
"I'm great!" I answered. "Why does how I am affect how you are?"
"You just seem really stressed out today and it makes me nervous around my kids."
This is the part that made me want to curl into a ball and beat my fists against the floor. Yes, I admitted, I was stressed out earlier today about the cakes. Nothing was working like I had wanted it to. I was tired and frustrated, and I wanted the cakes to be beautiful. But I never once snapped at a kid. I wasn't grouchy with the kids. How come I'm not allowed to have a bad day every now and then? He's grouchy most of the time! He's stressed out most of the time! I'm always covering for him with my kids who see him stressed out! I am entitled to have a bad day for crying out loud! Nobody needs to tip toe around me! Let me have a bad day! It will pass! I will snap out of it and be cheerful again! Why is Mom not allowed to be human?!
I explained that to him without the exclamation points, and he hugged me and walked out of the room to go play ping pong with his brother who had just arrived. I went to bed. He came and woke me up after 11:30 to kiss my face and apologize. I'm allowed to have a bad day sometimes. He was just being insecure, and he was sorry.
So, now I have permission to have a bad day every now and then. I'm saving up the next one for something really good.
Posted by Jenna at 8:40 AM

Oh...what a day. First of all - the cakes are WAY too stinkin' cute. The pink and brown was adorable, too.

It sounds like you handled your stress much better than I would have. You didn't kick Lyndsay out of the kitchen, or lock your self in your room and have a good cry then move on. But maybe because your family never sees you in a bad mood, they don't know what to do! But now they know - just pretend like nothing's wrong, and you'll be okay.

Here's an idea--if you have bad days more often, it won't throw the family for a loop. Yeah, that's it--being grumpy at least once a week is GOOD for them . . .

I love pink and brown together, by the way. And the day I make my own fondant is the day pigs fly. I'm so impressed!

First, I think your cakes were GREAT! Second, I think I just had the exact same fight with my husband. Mom's are NOT allow to have bad days, put kids in front of the TV, be grouchy, cranky, or NOT know where EVERYTHING in the house is. And really, you are not, because they rely on us for everything and you know....sometimes that is nice. We are so needed, loved and our mood determines the mood for everyone because WE are the pulse of our happy homes.

The cakes are absolutely FANTASTIC!!!

and the stress comments got me to looking back (way back) and wondering...
is it our stress that makes them tiptoe...
or
is it because they know we get upset when 'our humaness shows'?

All moms need to be kinder to themselves - allowing ourselves to be human too.

Just a thought from an OLD Mom who has been there/done that.

I have no idea when your blog got pimped out, because I obviously haven't been by in too long. I'm sorry. It's STUNNING though, just like you.

Well, you guys may not be professional cake decorators, but you sure fake it well! And what a great idea to make a pink cake instead. It turned out beautifully! Sometimes everyone just relies on the mom to be the sane one, the one that always has everything in control so when we have a bad day it throws everyone for a loop!

Sometimes it's the stuff that doesn't work out that makes a cake look the best! It's beautiful with the pink background. And I am amazed that you guys did 2 of them in the same day! You guys should get yourselves some customers! Great teamwork.

I love you Jenna!