A Preschool for Conor 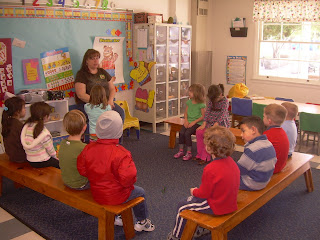 Last Monday, I went to get my brake light replaced and ended up at preschool.
I have no idea how that exactly happened, but there we were, talking to the director, who told us that they don't usually take new students so late in the year. She said we were welcome to stay, though, and see how we liked things.
Conor got right to work on the toys. And when it was Group Time, he found a seat on the bench, incidentally, next to the other little boy named Conner. When questions were asked, he raised his hand. If he had something to add, he raised his hand. For example, the teacher read the story of the creation of the world to the children. When Adam and Eve came along, they were noticeably undressed. Conor raised his hand.
"Um, why doesn't God just make them some clothes? I mean, he made the whole earth!"
A very valid point.
About halfway through the day, during a toy time, I told Conor we really needed to leave. I had not anticipated this preschool thing in our plans for the day. "But what about Snack Time?" he asked. "They're having salad," I told him. (This week was Letter S week.) "Oh, okay," he said, and with that he put away his toys.
The director had given me a stack of papers. She seemed open to the idea of Conor joining the group, even this late in the year.
Conor and I both were elated. There had been such a sweet feeling in that preschool, and I wanted it for my little guy. He'd had such a good time with all those new people and new experiences. I've never had one of my children in preschool before, but for some reason, this felt right. I talked with Adam that night, and even though it definitely stretches our budget, he loves to please me, and he trusts me when it comes to the children.
The rest of the week we set about filling out paperwork, getting immunizations, seeing the dentist (not required for the preschool, but the appointment was already set), and finding a doctor for a physical. Conor had three fillings, four immunizations, a TB test, a urine test, and a prick in his finger for a hemoglobin test. The kid went through it.
On Friday, we went back to preschool, but I had to stay with him the whole day since his doctor's physical paper hadn't been received yet. The Director shared with me her concerns about Conor joining the group so late (like, March is a month full of field trips, and maybe the lack of routine will be hard for him? Will he be able to adjust to the routine after that?) I don't see those things being difficult for Conor. He loves new adventures, structured or not. She agreed to take Conor, since he had been doing so well with the group, and allowed for a two-week trial period during which time she would hold my tuition check and either she or I could break the contract. 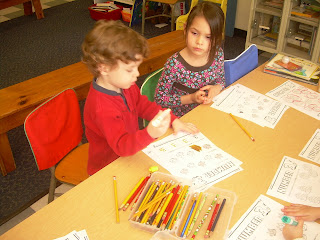 Conor feels so big to have a school to go to like all the other children in the family. He needed the activities and engagement with other kids his age. He needed the "warm-up" for kindergarten, sitting and listening, following directions, being aware of other children. The lesson plans are sweet and thoughtful, with fun little activities, outdoor play, story time, and only about ten minutes of worksheets. He comes home with stories to tell of new friends and what's coming up next time.
I now have the doctor's signed physical form, so today, I guess, Conor can stay at preschool without me having to stay with him. He's fine with that. It feels a bit weird to have all of the kids gone at school, and strange that my little guy will not be my trusty sidekick three days a week from 9am to noon. It's just one of those things, though. Parents must constantly reassess the situation, consider each child's needs, and readjust accordingly. I have loved the companionship of little Conor. I adore his company, but I know how much he will grow from having this experience added to his life.
Besides, today is Police Officer day at preschool, and I can't really compete with that.
Posted by Jenna at 6:00 AM

It's amazing how we are given guidance for each our of children and what is best for them. Keep up the great work! You are an inspiration.

Yay for Conor! What a fun adventure!

You just fell into that? Amazing!

It sounds heaven-sent. I can't believe he's old enough to go to preschool.