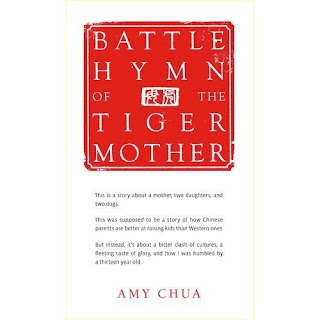 I just read the best book. Seriously. I loved this book.
Amy Chua is the daughter of Chinese immigrant parents, raised according to the "Chinese parenting model," and she writes this book, initially, to prove why the Chinese parenting model is better than the "Western parenting model."
You know how it is, stereotyped, ethnically or politically correct or incorrect as it may be, Chinese children seem to be top performers in anything they try. Musical prodigies, straight-A students, etc. Amy says there's a perfect explanation for this. Chinese parents expect more from their children and they make them work hard to achieve it. Western parents are too soft and we coddle our children, always wrapped up in their "feelings" and "self-esteem."
In the family Amy was born into, her parents expected excellence. She and her sister both attended Harvard, (Amy is now a professor of law at Yale, and her sister a medical doctor), and even their Down Syndrome sister, Cindy, holds two gold medals from the Special Olympics. Their mother was tirelessly and endlessly devoted to their development, as a good Chinese mother is.
Amy married a Jewish guy from New York, also a professor of law at Yale, and you get to read about the culture clashes and the compromises they made in their family. Basically, she gets to parent according to the Chinese model, but the girls will be raised Jewish. 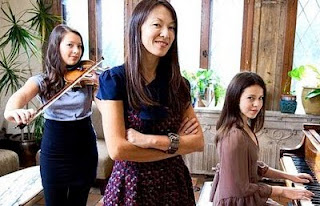 Amy is one tough momma. The girls began their musical training at age 3, and included hours every day (even on vacation, even on lesson days) of practice, which she supervised. Western parents, she says, enforce 30 minutes or an hour a day of practice. To a Chinese kid, the first hour is the easy hour. The Chinese "prodigy" isn't so much a result of supernatural genius ability, but of relentless practice and hard work. And the Chinese mother is in the trenches with her children.
Did it pay off for Amy? Well, yes. Both of her children are incredibly accomplished musicians, performing in Carnegie Hall and auditioning for Juilliard even before high school. But there were also really tough times--screaming matches, iron will pitted against iron will, and what Western parents might even call verbal abuse. But the Chinese view things differently, according to Amy:
"Chinese parents have two things over their Western counterparts: 1)higher dreams for their children, and 2)higher regard for their children in the sense of knowing how much they can take."
Some of what you'll read is hysterically funny. Some of it is shockingly appalling (at least to a Western mind---she plainly admits that Chinese parenting is done in the closet). But all of it is so real, and I love that Amy is both confident and humble enough to put it all out on the table.
Her dedication to her children cannot be denied. She clearly loves them and is completely devoted to them. She believes that the best gifts she can give her children are skills and an appreciation for excellence. These children clearly work harder than the rest of us, and they sacrifice a lot to work so hard. On the back book jacket, here are what Amy's children were never allowed to do:
attend a sleepover
have a playdate
be in a school play
complain about not being in a school play
watch TV or play computer games
choose their own extracurricular activities
get any grade less than an A (including an A-)
not be the #1 student in every subject except gym and drama
play any instrument other than the piano or violin
not play the piano or violin 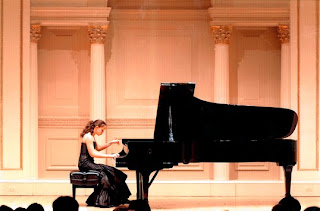 Here are some of my favorite quotes from the book:
"Never complain or make excuses. If something seems unfair at school, just prove yourself by working twice as hard and being twice as good."
"What Chinese parents understand is that nothing is fun until you are good at it. To get good at anything you have to work, and children on their own never want to work."
"Life is basically forcing yourself to do things you don't want to do. The sooner kids learn this harsh reality, the better."
"Western parents are concerned about their children's psyches. Chinese parents aren't. They assume strength, not fragility, and as a result, they behave very differently."
Most of what Chua says I found myself agreeing with, though I don't practice it all in principle (I can't believe she has the energy! You will be exhausted reading about how much driving to lessons, hours of practice, drilling, etc. she does with her children---all the while she's a professor at Yale!) There is something to be said for hard work and excellence at a skill, and far too few of us have pushed ourselves (or been forced to push ourselves) to the level where we break through the boundaries and discover what we are really capable of. It's inspiring, really, in a certain way. But Chua has also taken a lot of flack for this book that is swimming in controversy. (and of course, I'm late to the game.) It's not a parenting book. It's a memoir, and a self-deprecating one at that. She's not saying she did things the right way, she's just saying how she did things, and what happened. And even the front cover hints at the shift that takes place, when it says she was humbled by her thirteen-year-old.
I will say, however, that my children are not amused that I read this book. As I was reading it, I happened to look up in the living room I was sitting in, to see Aiden sprawled over the arm chair. Doing nothing. "Why don't you go do something?" I said. "Go develop yourself in some way. Let's not waste time." Then I saw Dylan walk aimlessly into the room. "What about you?" I asked. "What are you doing? Find something difficult and productive to do." And piano practice has stepped up to 100%, no excuses. At one point during her hour practice, Lyndsay stopped and called into the kitchen to me, "Oh my gosh. I see it! You've gone all Chinese on us!"
(Sometimes it's a good idea to keep what you're reading a secret from your children.)
Some people will say that the Chinese parenting model makes children grow up to resent their mothers and rebel, but Amy points out that she can't help but notice that while Western parents spoil and coddle their children and their feelings, Western children more often grow up and resent their parents, move far away, and sometimes even sever ties with them, while Chinese children grow up to revere and respect their parents, and stay close to them throughout their lives, dedicated to them, and grateful for their strict upbringing. Food for thought.
I could go on and on. A piano student's parent loaned me this book, and I loved it so much I want my own copy. So readable. So fascinating. A few, "well, at least I never said that to my children!" moments, and overall, to me, inspiring. Not that I'm going to "get all Chinese", but I agree with having high expectations and pushing children towards excellence.
I won't give away the twists, so go read it!
Posted by Jenna at 8:20 AM

Very interesting, a different cultural perspective on parenting is very helpful. It helps you see the silliness of your own culture better and can help you cut out the lies and fiction and get to the truth.

Ohmygosh, I loved that book so much. I read the Wall Street Journal article about it online. 30 seconds later, I was downloading Tiger Mother onto my Kindle. 60 seconds after that, I was sucked into the book and finished it later that same day. LOVED. It'll make my Top Ten this year for sure.

I *do* think kids need down time, but not nearly as much as most kids get. I'm working hard to combine channeling my inner Tiger Momma with my inner Hold On To Your Kids Momma. I think it can be done!

I am so happy that someone else felt this way about the book. I came away from reading it absolutely inspired, and didn't understand the horror so many people felt!