. . . Halloweens with Lyndsay are just a memory. 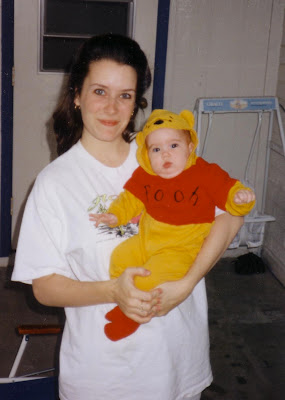 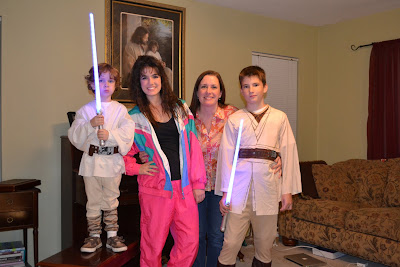 Lyndsay's last Halloween at home
I'm not even a big Halloween fan, but this realization is kind of sad. She's out there gathering the last of the candy that she can beg in her childhood. From here on out, she'll have to pay like the rest of us.
Lyndsay, thanks for making 18 Halloweens such a treat.
Posted by Jenna at 8:18 PM 1 comment:

The first week of clinicals, I drove home crying and traumatized.

We had been learning and practicing beginning nursing skills for four weeks and it was time to go to a long-term care facility and begin caring for actual patients. All of us were a mix of nerves and excitement. For most of us, that first experience was hugely shocking. Taking vital signs on healthy, willing, cooperative college students is a much different experience than taking vital signs on confused, aggressive, ill, and elderly patients. Bathing nursing mannequins is very different than bathing confused, aggressive, immobile, and obese patients. We were threatened and we were yelled at. The work was physically and emotionally exhausting, and thankless to boot. Though this was a "nice" facility, still the atmosphere was dismal and depressing, seeing the later stages of heartbreaking illnesses and a lifelong inattention to health. More than that, I felt completely inadequate. I wanted to know how to handle every situation, and, well, I just didn't. That week we followed a CNA around for her shift, but the next week, we would be assigned a patient that would become our responsibility. I was scared out of my mind.

When the next week came, I was assigned Mrs. P. I had taken vital signs on her the week before, so I was familiar with her, and I had a sinking feeling that she would be my assignment. I only say sinking, because caring for her increased my feelings of inadequacy. Mrs. P. is an 82 year old woman with a myriad of health problems, but the reason she was admitted to this facility was because while reaching for something on her kitchen floor, she fell and broke her neck in two places. She is lying in a halo, for at least three more months. When I first walked into her room, her IVs were being attended to and I was waiting to take her vital signs. She was not complaining, but there were tears streaming down her face, from the pain she was in. I started to cry too. I couldn't help it.

That second week, I walked into her room and whispered hello to her, reintroducing myself to her. She remembered me. Mrs. P is completely blind in one eye and has glaucoma in the other from her diabetes. Her hearing is going, but afraid of losing her hearing aids, she had her husband leave them at home. She's been married for 62 years, to a man she's known since she was 6 years old. They had six children, but lost two. One died in her sleep at the age of 30, and one son was murdered by a 19 year old gunman while on vacation, leaving behind a wife and two young children. Mrs. P had survived breast cancer 20 years ago. This woman was a fighter, but because she was used to such strength, she finds her current helpless and painful condition very difficult to deal with. Every movement is painful. She can't care for herself at all. It was my privilege to feed her, bathe her, brush her teeth, change her, roll her (with the help of 2 other nursing students), rub lotion on her skin, and see that her bed sore wounds were dressed. I changed her linen and tried to keep her warm. I assessed her, administered her medications, and kept track of her vital signs. But mostly, as I cared for her, I listened to her. I would crack some jokes and she would laugh. Sometimes when the pain just became unbearable for her after the routine of bathing and rolling, she would just begin to cry. She would ask me to hold her hand, and I would. Just standing beside her, holding her hand.

The second day that I cared for her, I was so excited to see her. I practically ran to her room. She was so happy to see me again. She told me that she had told her husband all about me. I told her that I had told my husband and children all about her. She told me how grateful she was for my care, that I was not only good at what I was doing, but that I was kind to her. I guess kindness can be hard to find in nursing sometimes. She told me that I would be a wonderful nurse. That meant the world to me because still I felt so helpless to really make a difference for her. Seeing another person suffer so much really affected me. Together we worked through our routine of daily care. We eased our way into each activity, waiting for pain to subside, or enough sheer will to force through it. Sometimes she would cry. I would apologize, and she would say, "Oh, no, sweetie, you've got to do your job."

When my shift was over, I felt I had to say goodbye to Mrs. P. She was in a light sleep, but I didn't want her to wake up and just not know where I was. I walked into her room and held her hand, and she opened her eyes. "Mrs. P, I said, I have to go home now." She began to cry. She didn't want me to leave, and I didn't want to leave her either. "Thank you for being so patient with me as I learn," I said. "Oh, no," she answered, "thank you for being so kind to me, for making me laugh, for taking such good care of me. I'm sorry I can be such a baby, crying all the time."

"You mean that?" she asked me.

She is. The strongest and bravest.

Yesterday I posted as my Facebook status that God must love me best.
That's because our day of clinicals was canceled due to our instructor being ill, and the icing on top of that was the fact that it rained. Hard! So, I got to stay home and enjoy a gray, gloomy, rainy day, and I felt happier than I can remember in a long time. It was such a gift it was practically Christmas!
When it was time to go pick Conor up from school, I decided to walk in the rain. As I walked, umbrella angled against the rain, and sometimes successfully clearing the rushing water I had to jump over to cross the streets, I wondered why it is I love the rain so much. I honestly doubt if I would ever tire of it.
I realized that, for me, as for the earth, the dark skies and downpours have a cleansing effect on my soul. I am emotional. I crave melodrama. I need time to contemplate and reflect, with even amounts of celebration and regret. I need to purge sadness. I need to pull out all my sentimentality from time to time and feel it drip and run all over me, and bring with it tears. I need a good cry, for no good reason, and for plenty of reasons all at the same time. I need to feel things, and feel them deeply, and that helps me feel alive.
Rainy days are more honest to me, especially living in southern California where the sun pretty much dominates the weather forecast. Rainy days are real. They make me look at things in my life with more discrimination, and they rejuvenate me. I am grateful for the replenishment the rain brings to the earth, and to me. I get all kinds of happy with even the threat of rain, the promise of rain, the anticipation of rain.
So, yesterday was a gift. I got up even earlier than I normally do to cook a favorite breakfast for my children and have it ready before I had to take Aiden to the bus at 6am. I was so tempted to keep them all home from school and just enjoy one another. Instead, I busied myself with caring for them while they were gone: tidying the house, taking care of me (me happy and cared for = them happy and cared for), and then I pulled a chicken out of the freezer and set to making chicken noodle soup and rolls to warm them once they came home. Though I didn't forego my studying entirely during the day, it felt so good to just be home, to slow cook nourishing food--to let the water become broth, to let the yeast swell.
Thank you, rainy day.
Posted by Jenna at 12:55 PM 3 comments: