Tonight is New Year's Eve. I just drove Lyndsay and her friend back over to the friend's house, where her family is hosting a pre-dance dinner for the youth in our ward before they go to the Stake New Year's Eve dance. (didya get that?)
I knew from an inside scoop that they were serving Hawaiian Haystacks for dinner, so I mentioned it in the car as we drove. Lyndsay had never heard of them. "Really?" I said (maybe that's kudos to me, or not, I'm not sure.) "Oh, I've got a great Hawaiian Haystacks story that actually involves you, if you'd like to hear it."
Well, who can turn that down, right?
I told her that way back when, I had a visiting teacher and very good friend named Shannon Oaks. She was one of the very first friends I had as a newly married woman, herself newly married. She and her husband, Dan, became great friends of ours. I can remember her bringing me her amazing homemade cinnamon rolls when she would come visiting teaching. Man, they were good. Well, one day she came for her monthly visit, and by this time, she was great with child, as they say. We got to talking about pregnancies, and I mentioned that my period was late. "How late?" she asked. "Three weeks," I remember saying. And her eyes bugged out of her head.
"Three weeks!?! You're pregnant! Are you kidding me? Take a test!"
I was filled with excitement and anticipation over her excitement and anticipation. Looking back, I'm not really sure what I was waiting for, except that I didn't feel any different (that gross part would hit in another 2 weeks and about knock me off my feet for the next 4 months.) and I wasn't sure when was the right time to take a test to be sure. You know, we were poor college students, and a pregnancy test was no chump change.
So, I bought a test. And I took it. And she was right! A little baby Lyndsay was growing!
Well, she gave birth to her first daughter, Amanda, and she and Dan bought a condo and moved out of our ward. Months later, my husband and I bought our first home and we moved out of the ward also, but we stayed in touch. I'll never forget bringing Lyndsay home from the hospital. She was wearing a little pink onesie with a pink ribbon headband adorned with a silky white ribbon rose. Shannon and Dan (and baby Amanda) were the first to come over to see her and to bring us dinner. (Here it is!)
Hawaiian Haystacks!
A classic dish of the 80's, carried over into the 90's by well-meaning Mormons everywhere. Comfort food. She had all the components in separate bowls for us to construct our haystacks. Rice, chicken, green onions, olives, cheddar cheese, mandarin oranges, pineapple, tomatoes, crunchy chow mein noodles, and of course, the chicken gravy. They were delicious! Of course, I was a ravenous newly postpartum mom whose nipples were blistering and bleeding and whose episiotomy was on its way to becoming infected, but even without those factors, I remember how loved and cared for I felt as I ate that delicious meal made by my first friend as a married woman.
So, I've never made Hawaiian Haystacks myself, that I remember, though I can recall plenty of ward parties where they were served. But every time I think of them, I think of Shannon Oaks, and baby Lyndsay, all fresh from God. And me, a brand new mother, with no idea of what was coming my way in life.
A sweet memory. I often wonder what ever happened to Shannon Oaks. I miss her.
I pulled up to the friend's house, and the two girls jumped out. "Enjoy your Hawaiian Haystacks!" I called.
"We will! And now we'll always think of that story whenever we eat them," Lyndsay said, her friend laughing and agreeing. And just before she closed the car door, she said, "Love you! See you next year!"
Her last year at home.
Funny how Hawaiian Haystacks are now both a first and a last.
Posted by Jenna at 6:43 PM 3 comments: 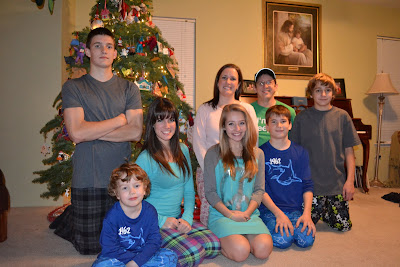 Christmas was really great. Would it be awful of me to say that it's okay with me that it's over? Because I'm exhausted.
We celebrated Christmas a day early this year. Because our children have two families, we only get to have December 25th every other year. This was hard in the beginning, but I decided that it was just important that we had Christmas all together, not necessarily what day it happened to be.
I love traditions. We have traditions like Christmas music beginning the day after Thanksgiving (which is also when we usually put up the tree.) and sleeping under the tree the first night. We read a scripture about Christ each night in December, followed by a Christmas story and family prayer. We have advent calendars. We try to do one family service project each week in December. And we make graham cracker houses.
I put off doing the houses until Dylan could be home with us, and I was glad I did. He may not even be fully aware of it, but I think our traditions have meaning to him somewhere deep inside, and I wanted him to know that he is a valued member of our family.
So, the kids got to work and turned out some pretty cool creations this year: 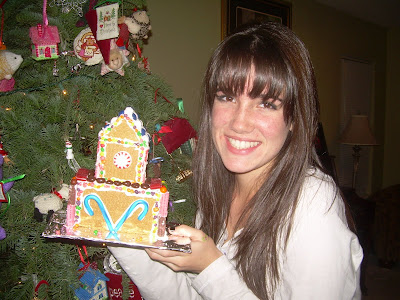 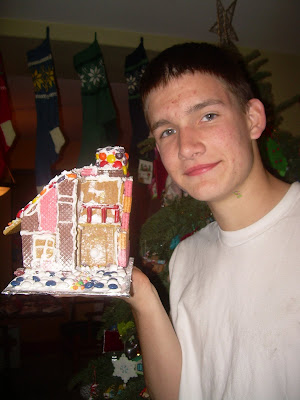 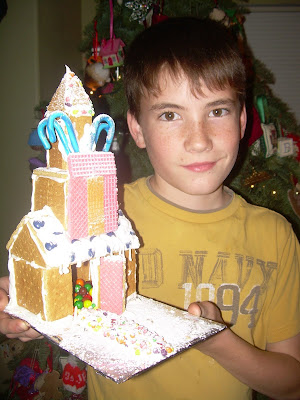 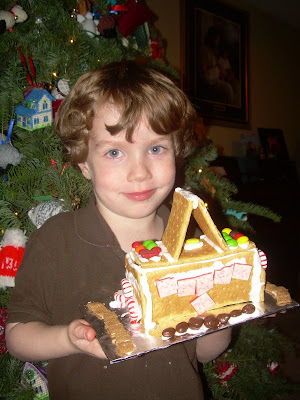 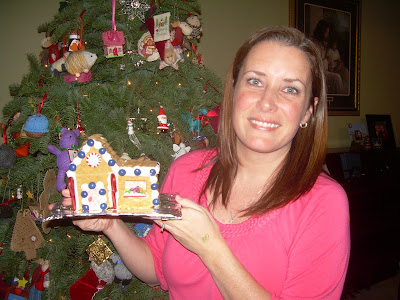 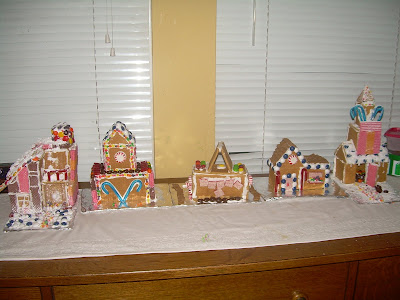 Another of our traditions is to go caroling around our neighborhood. We saved this one for Christmas Eve so we could have Caitlin and Sean with us. Sometimes, by the time we get to this activity, I'm so tired that I start to justify in my mind why it would be okay to let it slide just this year. But I never say anything out loud, because I can't let the troops know I'm weakening. There would be mutiny. Every year, when we knock on that first door, my heart fills with warmth and happiness and I'm so glad we're out there doing it. Our neighbors have come to look forward to it each Christmas season.
When we got home, we did our scripture reading, and then I had a treat prepared. The Giant Cinnamon Rolls from Mel's Kitchen Cafe. This is an ingenius idea, and a delicious one too! Except that rather than "glaze" them, I frosted them with cream cheese frosting, like Cinnabon. We had egg nog too, and watched a Christmas movie (Elf) before sending the kids off to bed. 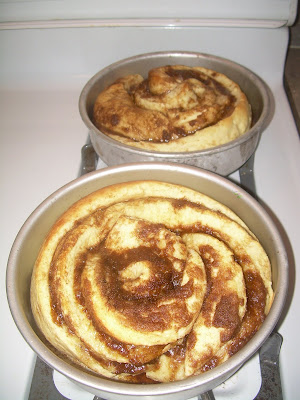 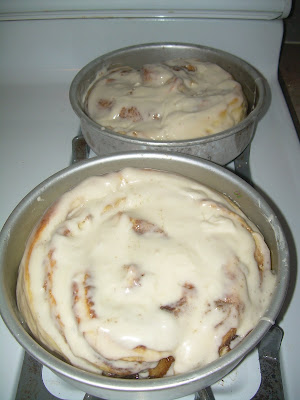 Frosted. So delicious. I highly recommend.
Of course, we also did the Christmas Eve jammies. And we took our annual family picture in front of the tree. Our 7th picture together. Wow.
Christmas Day itself was wonderful too. Of course, it was Saturday for us, so we didn't have to rush off to church. We opened the presents, I made breakfast (Overnight Caramel Sticky Buns from Our Best Bites.....again, highly recommended. So easy, too.) and while the kids played new Wii games and watched movies, I took a nap. Then I resumed my place in the kitchen preparing lunch and snacks and treats for munching on throughout the day while we hung out together and played games. (Settlers of Catan? Awesome.)
The tradition that seems to flow through every holiday is that I spend a lot of time in the kitchen. Cooking, baking, cleaning up. Eating, cleaning up. Cooking more, cleaning up more. Over and over. I ran the dishwasher three times each day. Having Dylan here seems to multiply the food consumption by a factor of 10. In the five days he was here, we went through 7 gallons of milk and 6 pounds of clementines. And loads of other things. But it is gratifying to feed growing children!
The other tradition is that I finish up the holiday tired. Needing a break. Some peace and quiet. Some fend-for-yourself meals complete with paper plates. Some reading time.
And guess what? That's the (one?) plus of divorce. I just dropped the three big kids off with their dad in Arizona and up next for me is my tradition of decompression and relaxation.
It might be one of my favorite traditions.
Posted by Jenna at 2:54 PM 1 comment:

My Dad is My Favorite Guy 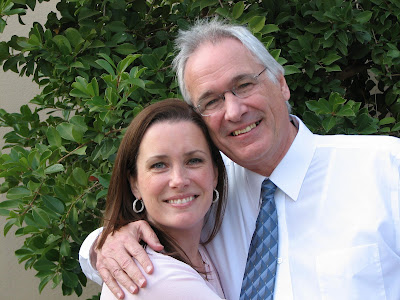 You know I love my dad. I really do. He's incredibly intelligent, interesting, witty, gentle, and humble. He's experienced a lot of loss in his life, but never of his faith, which shines so brightly that it can even illuminate the pathway of those around him. It has for me. He is my hero and a mentor to me, and still, even at my age, nothing thrills me like making him proud of me. He's been there for me during some very lonely, trying times. Those experiences have bonded us at the heart, above and beyond the ties of father and daughter.
And yet, it had been almost three years since I'd last seen him. He lives ten hours away, and with his work and my schooling (etc.) the chances to visit become harder to find. But when Aiden turned 12, I really wanted my dad to ordain him, if his own dad couldn't, and my ex-husband was very supportive of that. He, too, loves my dad. My father has been a pivotal priesthood example to my children, baptizing all of them, blessing them many times, ordaining Dylan, and taking Lyndsay and Dylan to the temple with family names. I wanted to carry on the tradition with Aiden.
He and his wife, Raelene, were scheduled to come the weekend following Thanksgiving, when Aiden turned 12, but then a job transition made that impossible at the last minute, so we rescheduled for the following week. The visit had to be rescheduled again, when the day before they were set to come, they had a huge snowstorm which dumped several feet on them and closed the roads off the mountain. So, this last weekend, we made plans again, and hoped for the best. It was tricky for me, with it being the weekend before my nursing finals, but Aiden was so anxious for his ordination, and I wanted my Dad!
What a great visit it was. In fact, the only thing missing, was Dylan. But we had a wonderful Sunday with the rest of the kids. Dad conferred the Aaronic priesthood upon Aiden and ordained him a deacon, and gave him a most beautiful blessing. All of us were there for that. I am so excited to see him get to pass the sacrament this next Sunday. 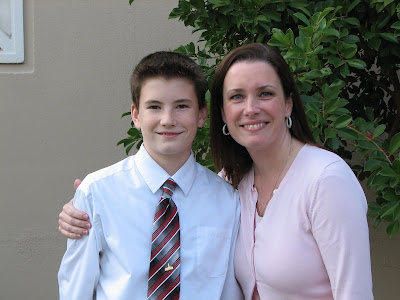 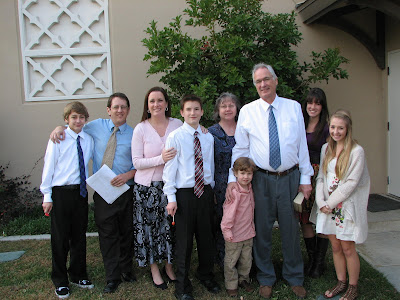 On Tuesday, I kept Aiden home from school, and we took Lyndsay out early, and we all went to the Los Angeles Temple to do baptisms. When Lyndsay and Dylan were old enough, Grandpa took them and we each did 100 family names. Amazing! Aiden was really, really excited for this special day. He was quite the trooper and he did 157 baptisms! Lyndsay and I each did 64, and then we shared 50 names with three other women who were there to do baptisms. Dad was in the font the whole time and performed them all! I must say, there are few things greater than being in the temple with your children. It was a marvelous day, and a great first experience for Aiden, which I know he'll remember forever. I love that my children can have these memories with their grandfather. 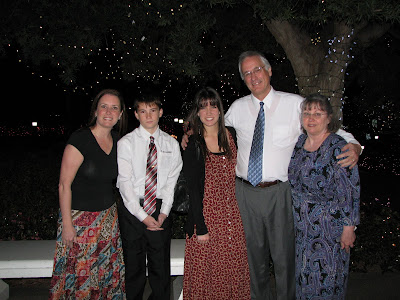 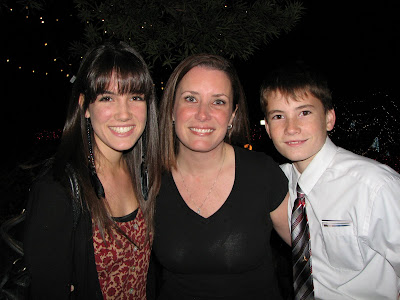 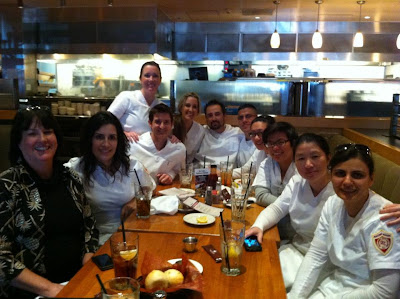