I've been away from my blog for so long. Life whizzes by. So many pressing issues are on my mind. It's interesting that as children grow up parenting becomes easier, and also more difficult at the same time. My day-to-day tasks are not as consumed with mothering as they were ten years ago, but my mind is more consumed, and my prayers more intense and constant. The dangers they face and the choices they must make are so much more life-altering, and yet they are at the stage where they must deal with those things largely on their own, using their agency, and I must stand back and hope that I've prepared them well enough. And I pray. Did I mention that? I hardly even care to pray about any other issues in my life as long as the Lord answers my prayers for my children, though I realize He's not limited in his benevolence.

To recap the last month in an abbreviated way:

In a mad rush, Aiden finished Driver's Ed and got his permit. He did his Behind-the-Wheel training in the days before he had to leave for the summer at his dad's. In California, teens have to have a permit for six months before they can get a license, which they can get at age 16. Since he spends the majority of the summer in Arizona, we wanted to get the permit's "clock" started before he left so he can get his license right after his birthday. Also, we wanted him to be able to get a lot of driving practice with his dad over the summer. He's a pretty good driver, that Aiden! Careful and conscientious, the way we like them. 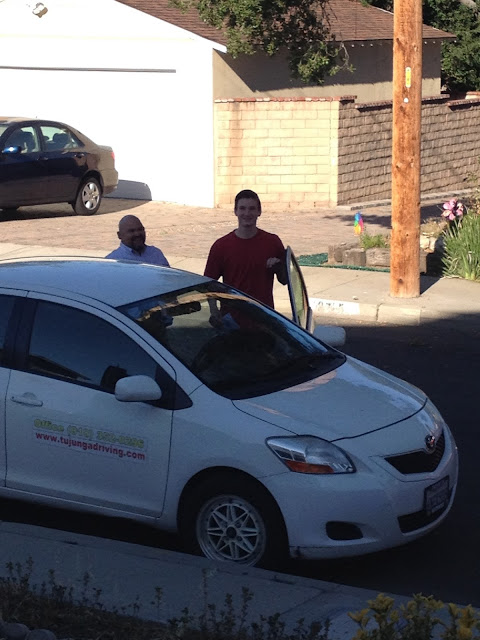 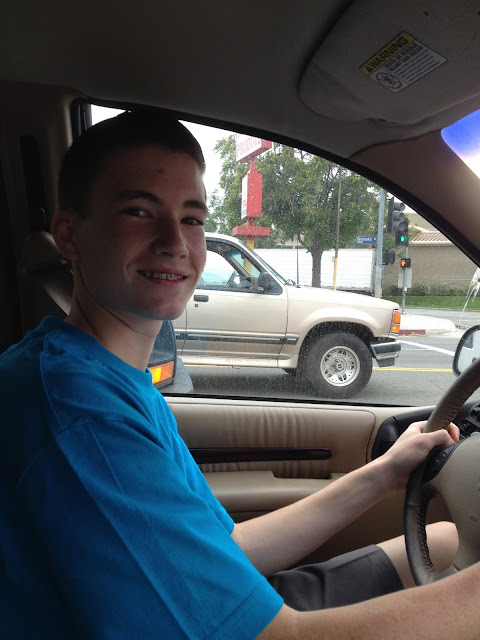 In the most exciting news, Miss Lyns finished her studies at BYU! She was able to finish her program in only three years because she went in with lots of AP credits and she took 17-19 credits each semester. Her major was Bioinformatics with a minor in Computer Science. She was also chosen by the College of Life Sciences to be the honored student for the Biology department! Graduation will be held in August. In the meantime, she is working at the research lab there on campus and studying to take the GRE. After a gap year of working and traveling to Asia, she hopes to pursue her PhD in human genetics. Wow. So weird to even say that. My daughter is a scientist! I have a whole other post I want to write about this journey, but I had to share these text messages that last day. 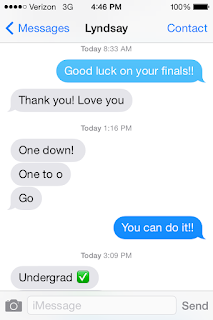 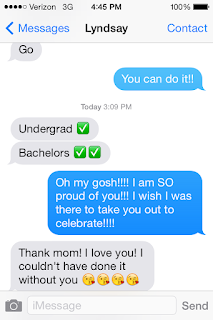 That was such an emotional day for me!!

Meanwhile, Aiden is now in Arizona spending time with his dad and brother Dylan. I love when he sends me pictures because I am missing both of them like crazy. And seeing Dylan's face does me so much good. It's been a very difficult few years as Dylan has been working through some serious struggles. I love that kid with an intensity I can't even put to words. I'm glad Aiden can be there with him. Their dad took them on a week long hiking/backpacking adventure to Montana. The pictures were gorgeous! I'm really grateful they are having such rich experiences. 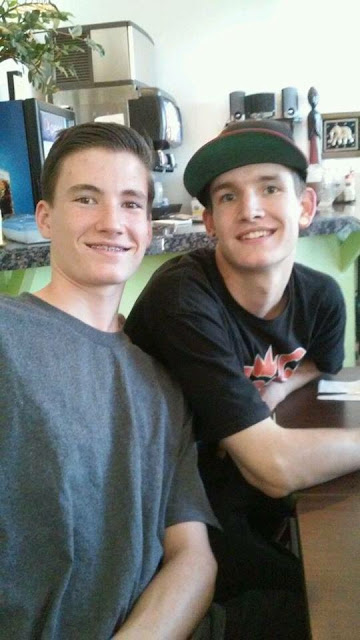 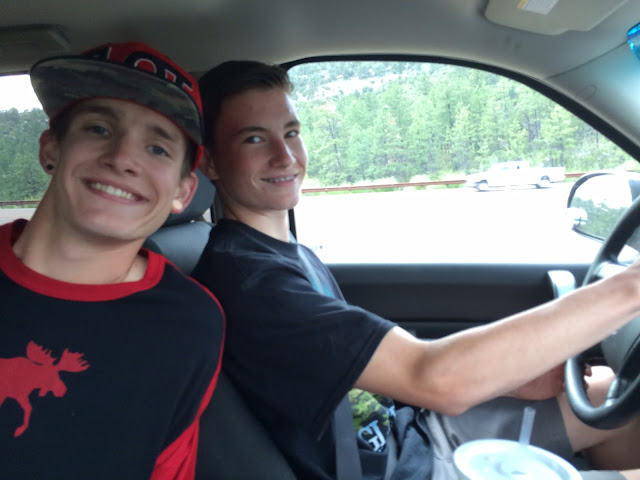 Back here at home, Conor finished up his baseball season, playing for the Angels. This was his first go at a team sport and he did so well! The little guy surprised us with some talent for baseball! He learned so quickly and proved to be a real asset to the team. Aiden and Adam helped with the coaching, which was wonderful support for Conor, who has been selected to play on the All-Stars team for Sunland. Practices for that team began last week. 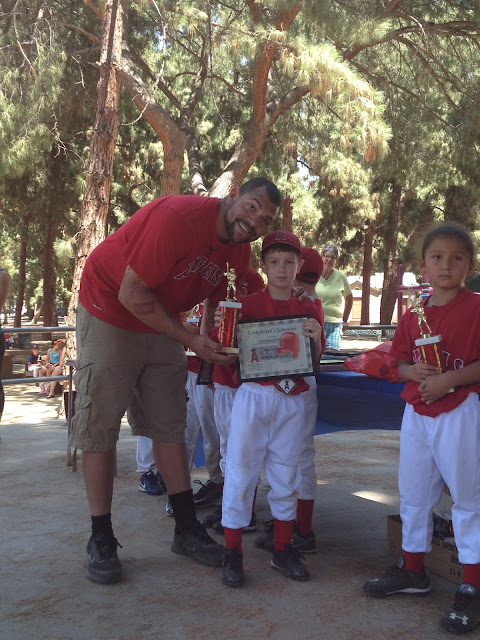 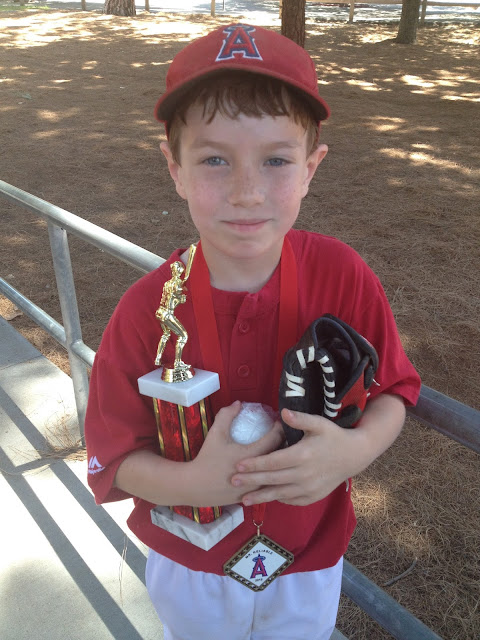 For Father's Day, I wanted to be sure Adam felt appreciated and loved for all he does for our kids. Despite whatever stress happens to be between us, his heart really comes out with his children. He loves those kids with fierceness, and he's been an important part of my kids' lives as well. To surprise him, I invited his two big kids, Caitlin and Sean, over for dinner. Conor and I had treated him with his favorite breakfast and cards and gifts in the morning. I was preparing his favorite dinner (spaghetti and garlic bread) when there was a knock at the door. He was so happy when he answered it and saw those two standing there! It was a great surprise! 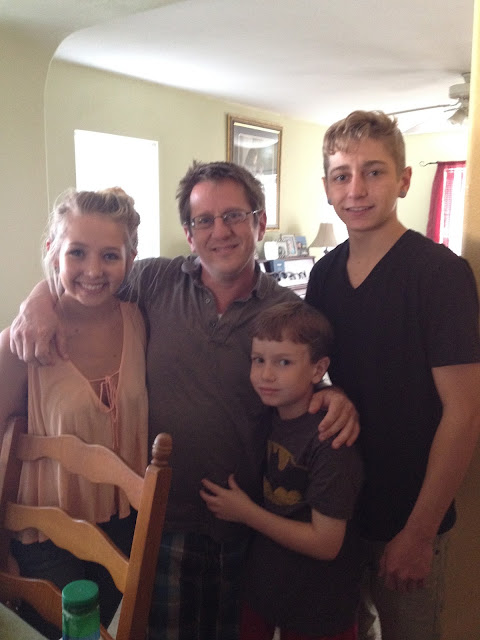 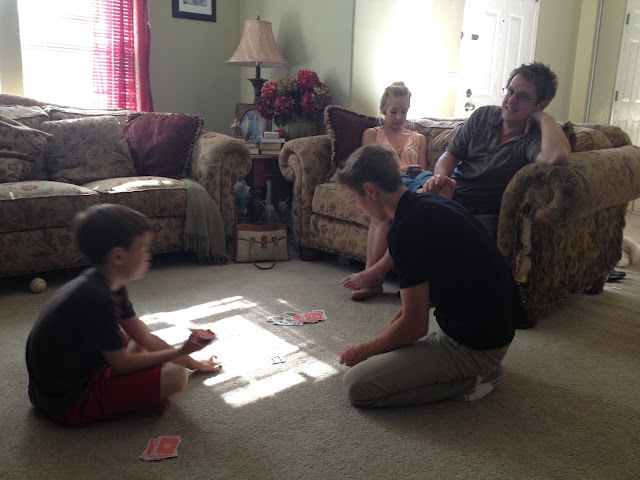 I love these kids, the blonde half of our brood. They have all the best parts of their dad. 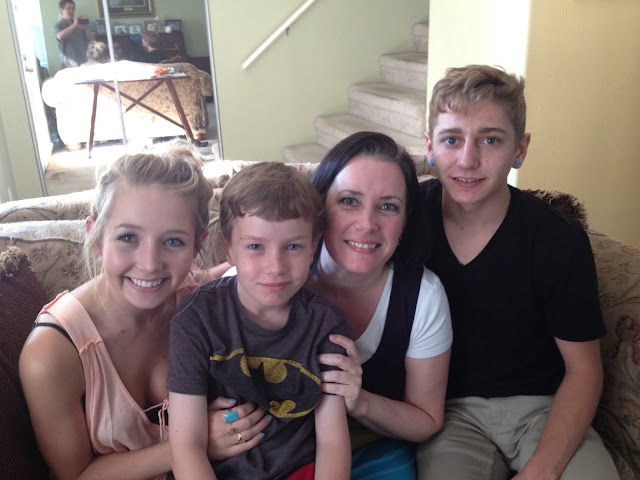 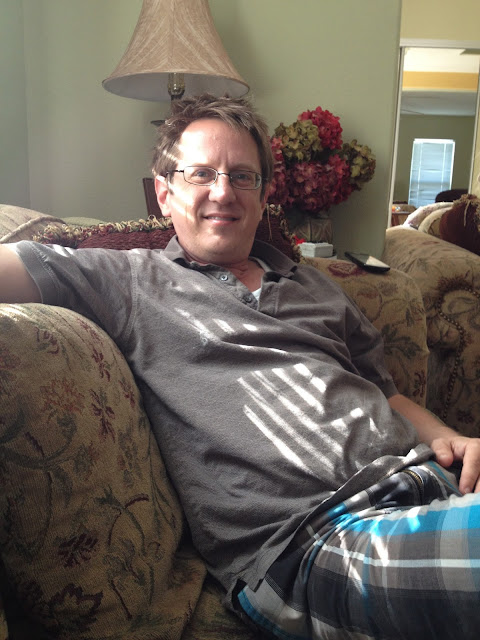 Conor loves a chance to play with his big brother. 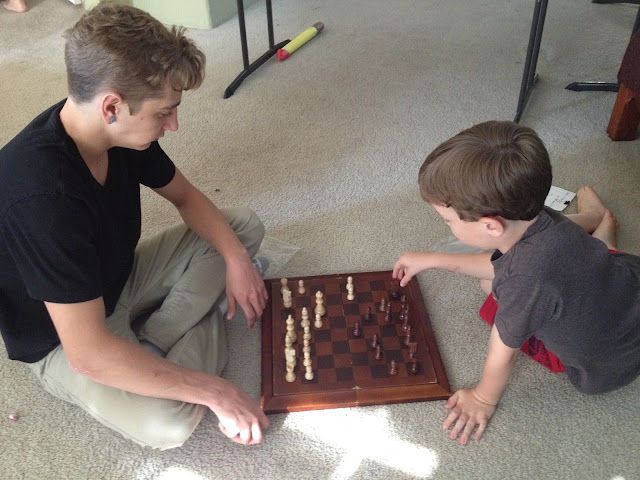 Adam requested Blueberry Cobbler for dessert. Man, that was a good choice. Conor and I made this one together. We served it with a little vanilla ice cream and it was incredible! 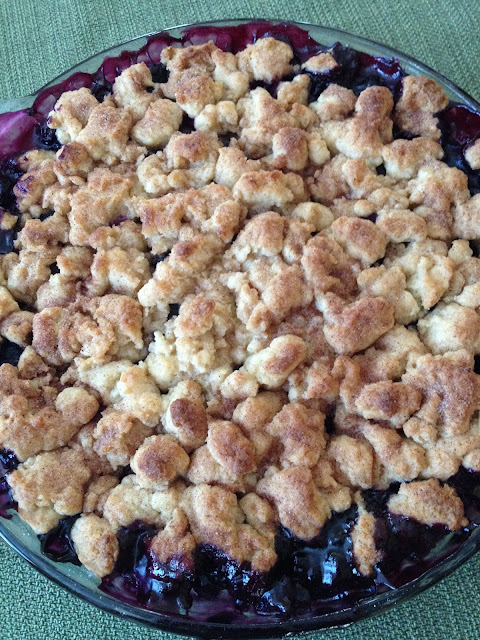 So, now, summer is in full swing. Adam has been out of town working in St. George with his stepbrother on a new project they hope will provide jobs for our families. I'm still working at least three night shifts a week. Conor is a little lonely without Aiden home, but he gets together with some friends, and I have him busy here at home. He loves to have a puzzle going. Our kitty, who also madly misses Aiden, likes it too. 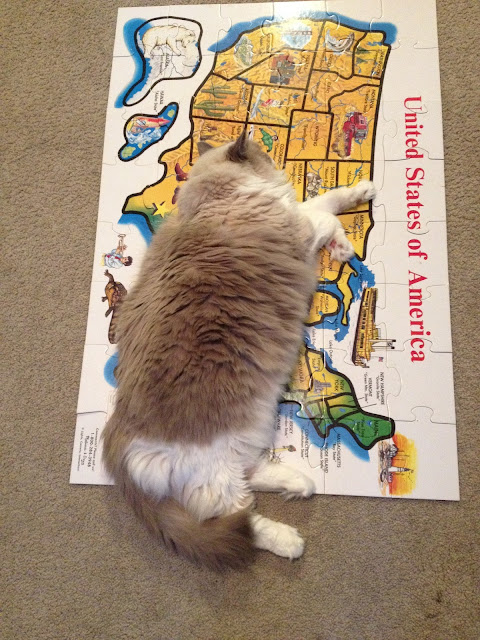 Here's the 500 piece puzzle he finished a few days ago. He already has another one started, and I bought him a new one that should be arriving soon. 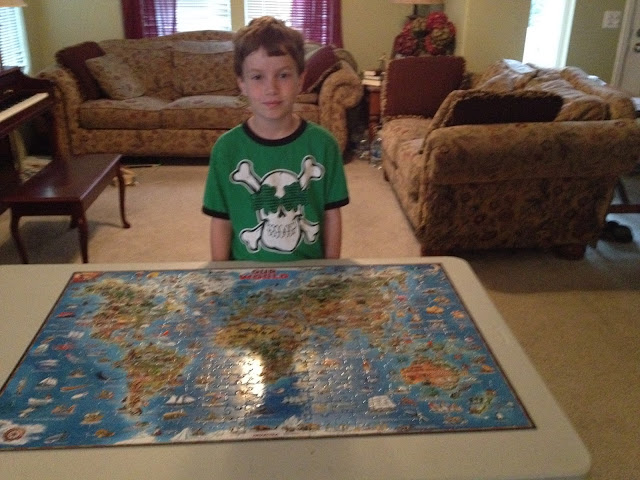 Yesterday was our annual piano recital. It was a really different year, with most of the students being first or second year. Most of my older students had to leave because of school commitments or moving away. I miss them so much, but it's fun to have a new cohort to bring up. They all played beautifully, and I think I was more nervous than they were! 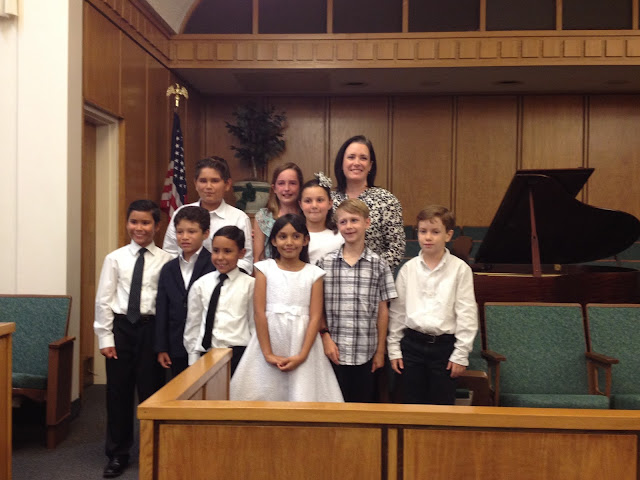 This was Conor's second recital. He played "Halftime Show" and "The Entertainer" from memory. He did a really good job, and already wanted another lesson when we got home at almost ten o'clock. 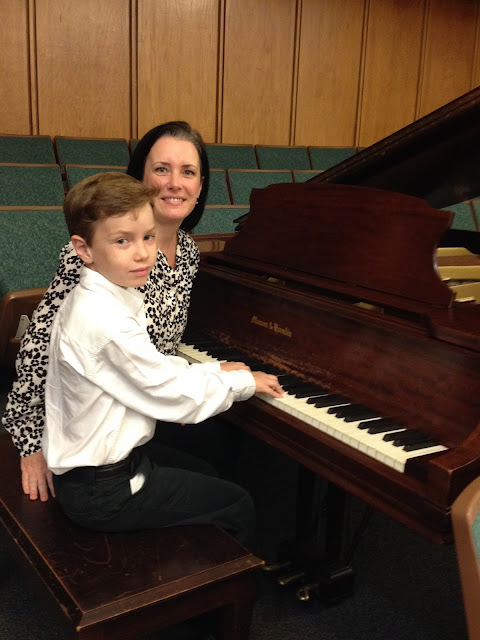 Conor's a cool kid. He has a tendency to want to spend his days watching television or playing video games, but when we drag him away and give him something to work on, the little guy has so many talents and learns so quickly! It's a challenge to keep his mind and body active. I really love the time we can spend together.

That's what we're doing a lot of this summer. Hanging with my little guy. Happy are the days when I don't have to go in to work and we can be together.
Posted by Jenna at 11:33 AM 2 comments: