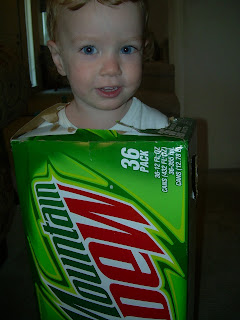 When Conor was born, he was so sweet and soft and precious. Babies are almost gender-neutral when they're born. They're all beautiful and even a boy baby can be ooh'ed and ah'ed at being such a 'pretty' baby. Some dads fight against this from the get-go. My husband is one of them. To him, Conor wasn't 'sweet', he was 'cool'. I loved his doughy soft shoulders covered in downy-fine hair. Adam said he was 'hairy' and 'tough'. He started calling him "Bruno the Barbarian". This didn't fit my baby at all, but somehow it made Adam feel more manly, I guess. A father's sons must be boy-ish and boiling with testosterone immediately, or else it is a poor reflection of his masculinity? Don't ask me. 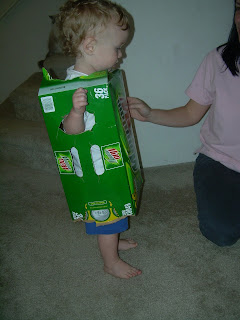 Well, Bruno morphed into "Doogie" within a few weeks, thankfully, and even "Doogers", which was my personal favorite. But then, Conor made a terrible mistake that I'm afraid he will be reliving for the rest of his natural born life.
He ate cat poop.
In fact, if he'd only eaten the poop, he could have escaped the stigma. All of my other three children have eaten cat poop, so why not him? But Conor feasted on cat poop. So, in this, he's on his own, and this is how Conor became "Doo-Doo". 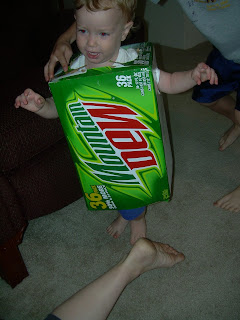 It was early on a Saturday morning. I was awoken by pounding on my bedroom door and frantic screams from the other side. I scrambled from bed and threw the door open to find Lyndsay bent over and crying and heaving. Something about Conor, who was 8 or so months old at the time. I got that instant knot in my stomach. It's bad. He's hurt. Please, no.

Through my yelling, "What is it? Tell me what it is! Is he okay?" she blurted out, "Conor ate cat poop!" And the dry heaves kicked in again and she ran for the bathroom. I went down the stairs, unprepared for what I was about to be faced with and how in the world I would clean it up.

The cat had had an accident on the floor. A rather loose accident, shall we say? Conor had splashed in it. He had scarfed it up, apparently, because it was all the way up both arms and all over his face, and he was delighted. He had a hairbrush in one hand like a. . .dare I say, barbarian club from his days as Bruno. . .and it was a lost cause, for sure. He had crawled with his poopy hands all over the livingroom, leaving a fecal trail of forensics in his path. Up the walls. Oh, he must have tried to stand there. It was horrendous. I didn't even know where to begin, but I picked him up, carried him up the stairs and into the bathroom, set him in the tub and turned the shower on him. Much like soaking the pot the chili cooked in all day.

Adam slept through the whole thing, of course.

But when he woke up and heard the graphic details, he dubbed him Doo-Doo, and it 'stuck', pun intended. And that is why Conor, my sweet little guy, is named "Doo-Doo". He'll need to earn another nickname before he starts dating, I'm afraid. Then again, if every girl who knows him also knows that story, maybe I'll have no trouble at all handing him that check for $5000 on his 18th birthday as his reward for no kissing!
Posted by Jenna at 11:26 AM

Too funny! You know, for some reason just the other day, the thought crossed my mind, "I wonder if anybody has ever eaten poop by accident or knowlingly for that matter?" Again, why this crossed my mind, I don't recall, but it did. I thank you now for filling me in on this tidbit of info that my mind so inquisitively needed to know!

OH my gosh! There is nothing that is as nasty smelling as cat poo. Yuck! My husband has teased our girls and called it tootsie rolls, but so far the only one who's actually sampled it is the dog (that I know of!) I don't think your son will ever live that down! LOL

Ewwwww, Conor!! Hahaha..it's gross but funny. He didn't get sick at all?? Well, at least he's still cute.

Ahhhhhh--that's awful and yet hilarious. I have to ask if the $5K is for real?

What a cute baby boy. And, ewwwwwwww!

Isn't it amazing what we moms have to deal with?!?!? And all while hubby sleeps! It gets to the point where not much phases us. Fortunately I have not had to deal with that type of grossness. Just one more reason we don't have cats!

Oh my goodness, you made me literally lol!!! One of my cousins ate a log of cat poop once, thinking it was a tootsie roll (he was pretty young), but I can't imagine a scene like you're describing.

Jenna!
I'd have to burn the house down. It reminds me of the old bumper sticker: "Boycott shampoo. Demand the real poo." If it was my kid, I'd stick him in a mailbox with a stamp and forwarding address on his forehead: "To Whom He May Concern." Awful. I had a terrible case of Die-a-rear-rot the other day. I've had a bad memory ever since. I love you.

Love,
I can't remember my name

"Much like soaking the pot the chili cooked in all day" This line deserves an award all itself. Terrific post; very funny!