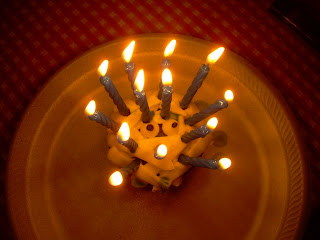 Another teenager in the house! And another nice teenager, which is even better!

Dylan turned 13 and so, to celebrate, we held a "SCARY: Dylan's a TEENAGER!" party. He invited some friends, who were all taller than me and ate a lot. Yeah, those boys. They can put away the food. 5 pizzas, my friends. 5 pizzas. 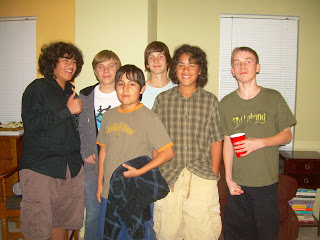 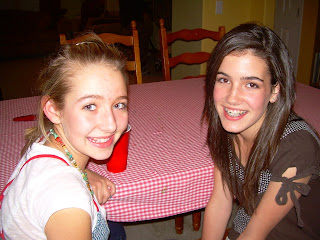 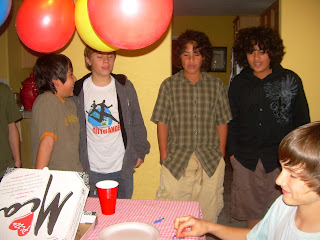 For treats we had the severed hand, which 'bled' into the punch. . . 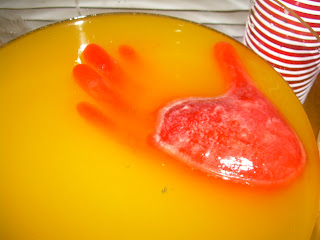 We had severed bloody finger cookies, some coming from witches. . . 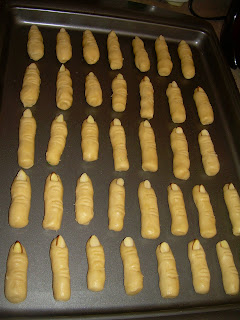 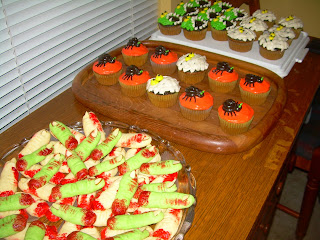 And we had a variety of spooky cupcakes, instead of one big cake. 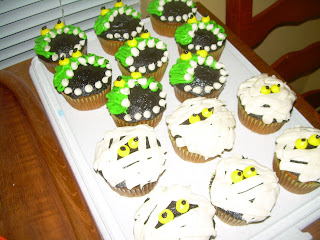 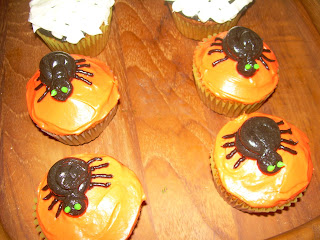 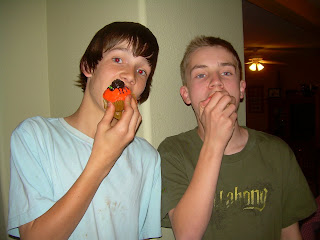 The boys watched The Village, and I could tell by their nervous laughter and chatter that they were appropriately scared. Which is good. 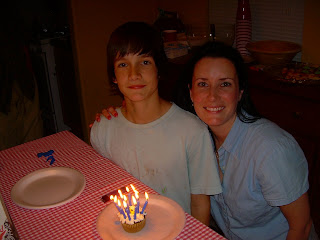 Dylan is one cool kid, I have to say. The older he gets, the more I genuinely like him and appreciate him. He's popular, but always kind. He's funny, but tender-hearted. He's chivalrous to girls and women, and he's fantastic with babies. He's smart and strong, and he's uncompromising in his standards. He goofs off, sometimes pushing the limits, but he can rein himself in, and feels adequate amounts of remorse when he's done something wrong. His conscience is a better caretaker than I am, which gives me great peace of mind. He's learning to control his silliness and need to be the class clown. He's learning to wield his developing manhood with wisdom and maturity. He has great ambition and vision for his future.

And he loves his mom. Despite being a teen, he has no problem unabashedly telling me so anytime, anywhere. . .with hugs and kisses, and opened car doors. He'll even carry my purse for me. He's gonna make a great husband one day, when I'm done with him. 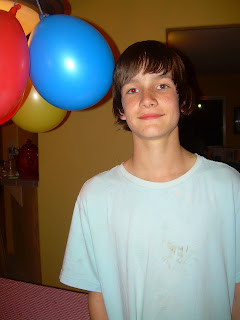 Congratulations on your very first armpit hair. That one on the left. Awesome. You're on your way after such a long wait.

Happy birthday, Dylan! What a scary looking party! So now you gotta tell how you do that punch...

The punch is super easy, and nothing original. It's actually just some mango juice and then Sprite (I had to use a punch that wasn't red!) To make the hand, I just poured Kool-Aid (I used black cherry) into a surgical glove, rubber-banded it, and froze it overnight. Then I just peeled the glove off and put it in the punch! Double duty scary and ice.

No way. No freaking way.

They grow up fast, don't they!

I like the idea of the scary party for 13. We'll have to try that in 20 months (gulp) when we welcome our first teenager to the house.

Happy Birthday Dylan Boy! I love you and am kind of refusing to believe you are already 13.

What an awesome idea! Sounds like the party was a hit. Did you make all of those fingers? It's hard to tell anymore!


The part with the 5 guys 5 pizzas had me laughing because holy geeze!

Happy belated, Dylan! Your aunt Abby loves you like whoah!

What a fun party! Congrats to Dylan.