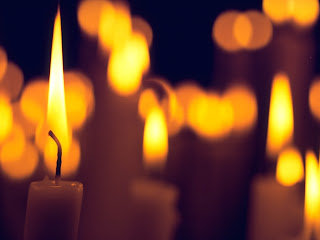 Years ago, my mother held a special Christmas Family Home Evening in which she talked about Christ being the light of the world as she held a lit candle in our dark livingroom. Then, we passed the flame around and soon the room was aglow. I loved it so much, and it made such an impression on me that I decided to write my own version of that devotional, and as a family we do it every year, just days before Christmas. Several people have asked me for it, so I thought I would share it here. Maybe you'll want to do something similar in your family. We usually start with a prayer and a song, and then all of the children are given white tapered candles, and the lights are turned off. The room must be pitch black, and then I light my candle and read:
"The Savior was the light born into a darkened world. The great star that appeared in the sky that night symbolized his light. The world had been waiting and watching for the Son of God to appear, and finally He came, heralded by angels. His was not a birth of high circumstance. He was not born in a palace, but in a stable. His coming was not attended by kings, but by shepherds. His parents were not of nobility. His mother was a young, pure virgin. His earthly father, a carpenter.
The life of Jesus Christ was quiet and unassuming. He went about doing the will and the work of his father who had sent him. He spent his days, every single one of them, in the service of the lowliest of people. He taught the common folk, because they would listen. He healed the sick, even the lepers who had been shunned. He raised the dead. He showed the way.
I believe that everyone who heard him then, and who hears him now, becomes a carrier of his light. Alone, we are barely able to see by that light amidst the darkened world we now live in. But together, we are brighter than noonday. Together, we light the way for others to see and follow him too, and shine his light for all the world to see.
The greatest gift he gave to us was his life, atoning for our sins and transgressions so that we might earn eternal life. The greatest gift that we can give back to him is also our lives. But we don't have to give UP our lives; rather, we must give OUT our lives, in service, in obedience, in goodness, in righteousness, in example, in courage, in faith. When we do this, we shine the light of Christ."
At this point, I then share what gift of myself that I wish to give to the Savior this Christmas, or in other words, what I will do to shine as He did. It may be more fervent obedience, more humble prayer, or greater service to others, whatever it is that the Spirit whispers I am ready to learn. Then, I light the candle of the person sitting to my left and they share what gift they will give to shine the light of Christ, and so forth, until the light has been passed around the room and everyone's candles are glowing. The room is now significantly brighter. With our candles lit, we sing a closing song together, and end with a prayer and refreshments.
Candles are blown out, but hearts remain glowing and warm.
Posted by Jenna at 5:29 PM

You are such an example to me. Truly. I want to have a big heart and a glowing testimony like yours when I grow up.

Such a great post! This is a fabulous tradition. I'm sure my girls would love it. Thank you so much for sharing it with us.

I remember that FHE! The Motherhood even cried during her presentation, her testimony of the Savior was so vibrant and impressive. You were the Family Home Evening Secretary then, and you wrote about it in the FHE Minute Book, which I gave to you several years ago. I'm overjoyed that you are following that tradition.

Tomorrow is brother Joseph's birthday, and we are going to the Snowflake Temple to perform hundreds of baptisms and confirmations for our ancestors as a special thank offering to the Lord. I wish you could be there with your two oldest. I miss you. I love you.

The Damsel In DisDress said...

Very cool! I'm going to do this.

I'm so glad I opened this post! What an excellent idea. Thanks for sharing. That will be the perfect ending to our Christmas Eve!