But maybe not at first.
Our stake had set a goal to assemble 10,000 hygiene kits to send to the earthquake victims in Haiti and Chile. I thought this would be a great experience for the kids, so I signed our family up for a three hour shift. Problem was, I had signed us up weeks in advance, and though I had tried to build excitement, when the actual day came, I forgot and gave the kids permission to go to friends' houses after school. When I saw my calendar and realized my mistake, I knew I had set myself up for a battle. But these days I pick my battles, and I picked this one. I called one child and told them I'd be picking them up early. I drove down to another friend's house and waited outside for another child to arrive and gave him the news. They were not so happy, but they were reluctantly obedient. Grumpy though, and whining and complaining most of the drive down. When we arrived at the Stake center to find an empty parking lot, they thought they'd hit the jackpot of escape. But, no. A quick phone call informed us we were just at the wrong building and we set off, with a lot of sighing and more grumbling coming from the back seat.
Frankly, it was getting on my nerves. I was tired too. I had a million things to do too. The next morning, in fact, was our huge youth fundraiser and I had a lot to do to prepare. Lyndsay, in fact, stayed with a group of girls working on that service, but I knew once our shift ended at 9pm, I still had baking to do for the bake sale. I gave one lecture in the car, just a brief one, about how suffering people in the world are our brothers and sisters and we are responsible for them. They'd lost everything--everything!--and we had the privilege of offering a small amount of our time and resources to bring them some physical and emotional comfort. (So, shut up!) Well, that part was implied, but you get the picture. After that, I ignored the murmuring and stayed cheerful.
When we got there and saw huge trucks with boxes of supplies being emptied into the gym, and a room full of tables set up in stations and dozens of people, all giving up their time on a Friday night, the mood shifted almost immediately. We were assigned to the towel station, where we set to work (with many others) to fold 22,000 hand towels so that they could be added to the kits.
That's a lot of towels.
But it was easy work, and we got into a rhythm with the others assigned to the task, and as we worked, we talked and laughed. 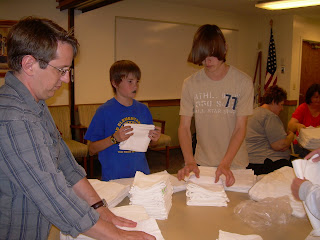 A friend of Dylan's, from another ward, showed up, with his grandmother to help. That did a lot to impress Dylan and keep him engaged in the work. As did his iPod. 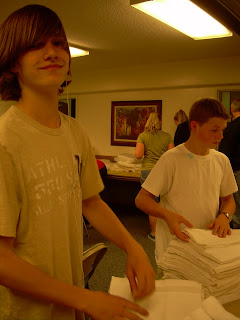 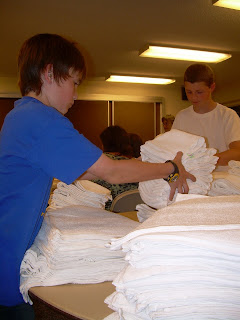 Even Conor proved helpful. Conor loves to have jobs to do, but I did wonder if he would be a hindrance at this activity. Nonsense. The sweet women in charge treated him like a capable little guy and gave him jobs. He got to carry over bags of towels from the boxes and rip them open and hand the stacks to folders. He also got to pick up all the trash from the floor and throw it away. 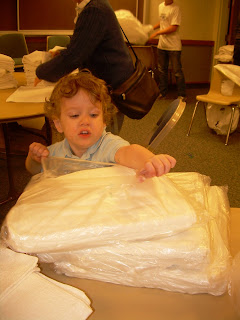 He even got in on some of the folding action. 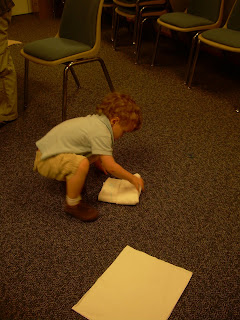 And when he needed a break, he took one. But the entire time we worked, he never once got in the way or got into trouble, and he had a great time. He was a hit! 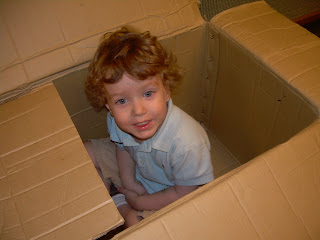 And when we finished, the gym was covered with boxes filled to overflowing with folded towels, all set to be added to the hygiene kits, which would be assembled in the morning. We exceeded the goal and ended up sending over 11,000 kits to the needy. It was such a blessing to help in that way. We talked about how every towel we folded would be unfolded by a person, a brother or sister, who would be so thankful for the chance to wash their face, brush their teeth, or comb their hair. Those little luxuries that we take for granted can really lift the spirits of those who are suffering and in despair. They were hours well spent, and we all left happy. Filled. 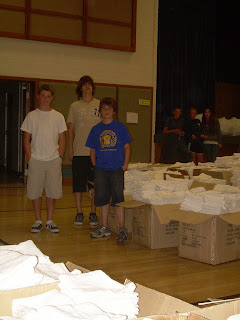 You are an inspiration (and so busy it gives me hives to think about it).

Way to pick your battles! That was a great parenting moment. And I'm with Heidi about the hives

that's so cool and a big goal, i bet you guys can do it though!

It's great to be able to make a small difference--and to teach your children how crucial that is.