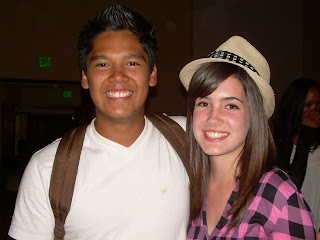 She thinks he's "Golden". She has a nickname for him, and her voice changes whenever she talks with him on the phone. She's not old enough to date (yet. . .tick-tock, tick-tock), but a few times I've invited him over to the house so I can interrogate--I mean, feed him--and get to know him. She knows the rule about how he can be the favorite one, but he can't be the only one. She told him about the rule that for every two (group) dates she has with him there must be another (group) date with someone else. And his response to that? "Listen to your mom. I think that's really wise advice. I'm cool with that."
He writes poetry. And songs. He plays Lionel Richie and Billy Joel on my piano, though he can't read a lick of music, and he sings. Oh, does he sing. My girl loves the boys with the music, just like I did.
There was Hank. I was a Junior, he was a Senior. Hank with the green eyes and chiseled jaw. Hank, who played Bridge Over Troubled Water while I barely hung onto life for my heart beating so fast. He had those masterful fingers that I wanted always intertwined with mine.
There was Brent. I'd grown up with him my whole life, but somehow saw him when I turned 15. Brent with the blue eyes and the smile that blinded. Brent, who sang harmony with whomever was singing melody. Even with me, as we sat at the piano and played and sang, and I named our future children in my mind.
I see it in Lyndsay, and it takes me back. She's a sucker for a guy with music in his soul. On Friday night I took her to his high school where he was performing in a competition for the UCLA AfterSchool program. The MC introduced him and told the audience he would like to dedicate his song to his "Special friend, Lyndsay." Be still my heart. There she sat next to me (his parents on the other side of me), beaming. I grabbed her knee to steady us both.
He sat on a stool with his ukulele and he sang with his whole heart "She Was Mine" while he looked at her, his eyes twinkling and that brilliant smile of his sparkling against his golden skin. The audience went crazy. Even I was a goner.
He won first place. In fact he scored the highest out of every category-- art, song, spoken word, and dance. He goes on to perform at Paramount next.
There was hugging afterwards, and giggles, and I might have nudged her with "For every two hugs you give him, you have to give another guy a hug." Which got more giggles. And eventually we had to drag them away from each other.
In the car, I said, "Man, even I'm in love with him." To which she replied, "Back off, Mom. You're married." But it's just the way seeing her, seeing him, it just takes me back in time. The thrill of teenage love. It's kind of beautiful. Filled with hopeful promise.
Gearing up for the ride! Tick-tock, tick-tock.
Posted by Jenna at 8:42 AM

Love the idea of another group date after one with him. Brilliant!

So neat for her--and you!

(Meanwhile, I'm freaking out because I've got two kids with the clock ticking, and I don't know that I'll handle it nearly as gracefully!)

Oh the sweetness of first love! It's impossible not be nostalgic over it!

we plan to allow Gen to court, when the time comes, and only plan on allowing group dates. i LOVE this idea though! fantastic. 2/1... you are so wise, Jenna...

Teenage love is a lovely thing, isn't it. Wow, to be in love in May--making me feel very nostalgic

Hope it doesn't ruin him for her if Nana says he's adorable. :o)

Oh, he's gorgeous! I would love to hear him sing.