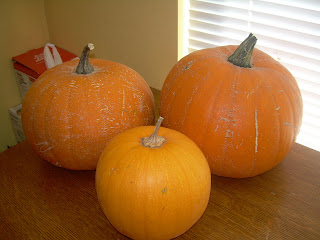 My garden yielded three pumpkins this year from the two plants I had growing. Our plan had been to carve them for Halloween, but because we won several pumpkins in a contest to guess the collective weight of five pumpkins (somehow, magically, I guessed exactly right!) we ended up leaving our home-grown pumpkins unscathed. I was determined to cook and puree them so that they could feed our family instead of just going to waste. But, if you're anything like me, you have a lot of lofty aspirations that kind of go by the wayside. This time, though, I was sufficiently inspired by The Prudent Homemaker and decided to show my gratitude for my small harvest and get to work!
Now, these were not pie pumpkins, which, I hear are smaller and sweeter than other varieties. But they weren't outrageously sized, so I wanted to try anyway. Next year, I think I will only grow pie pumpkins since my garden space is limited and we can always get carving pumpkins elsewhere.
First step: Cut the pumpkins and scoop out all the stringy mess and seeds. Which, I could have roasted, but step one had me so ticked off, and nobody likes roasted pumpkin seeds around here anyway, so I tossed them. (The Prudent Homemaker can only get me so far.) 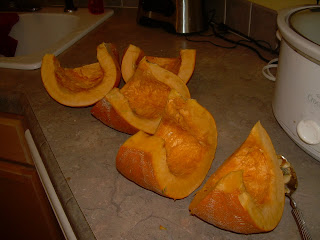 After all three pumpkins were cut up, I put them in pans and poured a little bit less than a cup of water into each pan and roasted them at 400 degrees for about an hour. When the fork went into the flesh easily, they were done. 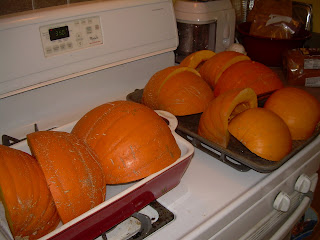 They cooled and then I cut the flesh off the skins and put it through my food mill with the pumpkin screen. (You must get a food mill!) Aiden did most of this step for me. 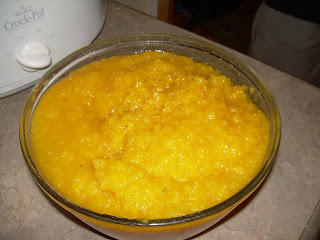 Then I put 2 cups of pumpkin puree into each freezer bag. I ended up with 8 cups of pumpkin from my three pumpkins. Not bad. And a heck of a lot cheaper than buying canned pumpkin, even if it is on sale right now. I froze three bags and with the other I made pumpkin cranberry bread over the weekend. The pumpkin taste definitely wasn't as strong or noticeable, but it still made really yummy bread. 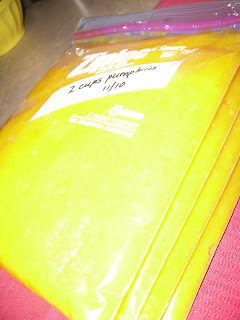 And now I feel proud of myself for doing it. I'm so glad I get to wait a year before doing it again.
Posted by Jenna at 6:07 AM

Not that you're asking, but I suggest the following for pumpkin seeds: boil for a few hours in heavily salted water (maybe 1/2 to 1 cup salt in a few quarts of water).
Rinse lightly, spread on a cookie sheet. While still hot, toss liberally with butter and then some chili lime (or other) seasoning. Roast at 200 degrees overnight. Perfectly crispy and delicious the next morning.

I am impressed. I made my own chocolate syrup last week. The kids must have liked it well enough because it's all gone.

Good for you! There is absolutely nothing like pumpkin pie made from home-grown squash. Absolutely heavenly.

Of course, if you have any canned pumpkin in your food storage, you either need to make it into pies NOW, or be prepared to give it away to a food bank, because once you've made a pie from your own pumpkin, you will never be able to eat the canned stuff again.

The Lovely One & I are on the very verge of preserving the pie parts of our many harvested pumpkins. The jars are on the table. The pressure cooker is in the ready position. The sweet pie pumpkins are lined up on the counter. All we need is time and an Aiden or two. I'm immensely proud of you. You could write the manual on Prudent Homemaking.

I'm going to remember this for next year.