It's His Birthday, and I'll Cry if I Want To 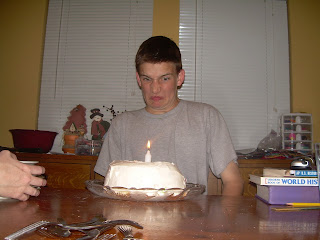 Well, that didn't go over well at all.
Tonight we celebrated Dylan's 15th birthday. I can't remember a worse birthday celebration. I really blew it.
Last night, I watched this horribly emotional movie about mothers and children--mothers who give their babies up for adoption, lost relationships, and the ripples of regret. It was actually a pretty good movie, but when it was over, I couldn't stop crying. Into my pillow, as quietly as I could, I sobbed and sobbed. I remembered every harsh thing I'd said to my children, every time they irritated me and I let them know it, every time I was too busy, too short, too detached. I wished I could do things all over again, especially when I realize that I'm running out of time. Motherhood is fraught with melodrama.
My thoughts turned to Dylan. Fifteen, he is, now. And we struggle, he and I. In fact, this will be the year that he will most likely move in with his dad for a while. It rips my heart out, and yet, it whispers relief. Both of which are hard to deal with.
I didn't get much sleep. Once I fell asleep, the night was fitful. Swollen eyes and fatigue kept me moving in slow motion throughout the day. I made dinner, but then some people didn't want to eat. "It's Dylan's birthday dinner!" I proclaimed, "Please eat!" So all these people gathered around the table in a huff.
"Now," I said, "we're going to go around the table and all say what we love about Dylan."
Dylan, of all people, protested. "Thanks all the same," he began, "but I'd rather you not. I hate that part. It takes people too long to think of something nice to say."
"It's a tradition, and we're doing it," I said. I have no idea what the right move to make is anymore. Give in, plow through? I've been walking on eggshells with this boy for so long, I can't even think straight. It does take people a little longer to think of nice things to say to him, but there are plenty of them, for sure, and he needed to hear them. We needed to think of them. He's full of goodness! He is loved!
I brought down Dylan's gifts. Two pairs of jeans, neither of which fit him. One because of a warehouse mistake, one because of growth. Frustrated, and obviously disappointed, he asked why I was trying to "change him". Can't I see that he only wears Dickies shorts? He doesn't wear jeans because he doesn't like jeans. Oh, brother. I thought it was because he didn't have any jeans, and here it is January and all.
I argued that I'd bought them from Tilly's, his favorite store, and the one pair really should fit him, since it was the same size as the last pair we bought. He tried them on, just to make a humiliating point. The point being that I'm stupid and clueless, I suppose.
Just give me back the bleeping jeans and I'll return them.
He liked his other two presents, but the atmosphere was shot. My feelings were hurt, rightfully, wrongfully, reasonably or unreasonably, I admit to all of it. I've been killing myself trying to please this boy and I just can't get it right.
We sat down for cake, and I didn't have any candles. Why should we have candles? The birthday's already ruined, why not take it all the way down? I found a huge jack-o-lantern candle and set it in the middle of the angel food cake. Our traditional mother-child-birthday cake photograph is laced with disappointment. We sing. Even I didn't buy it. He makes a wish. Finally. I can only imagine what it was.
The cake was delicious.
I want to run and run and run. Except that it's dark outside, I'm out of shape, and I hate running. Lyndsay tries to comfort me. I begin to cry and tell her to be quiet. "Yeah, well, when the whole birthday is on your shoulders and you mess everything up and your child is so spoiled that he complains about any gift he is given, then I'll tell you things are fine." She walks away. Smart girl.
Now I sit here sulking, with everyone else upstairs in safety. Fifteen years, I made it. The last birthday I may have my Dylan-boy with me. Probably nobody understood the emotional backdrop to this evening's charades. The movie, the lack of sleep, my turmoil over failing my son, the regrets, the mixed emotions about him leaving, anxiety about the future. All of that showed up tonight.
They just wanted cake, I think.
Posted by Jenna at 6:14 PM

Love you, Jenna!! I wish I knew what to say to help you feel better!

I hope tomorrow is a better day. for everyone.
I love this post. Really makes me think. and feel. Thanks. And sorry.

I am sorry for all the strain. We all do the best we can with the circumstances and constraints we have. My boy is 10 and yet I'm already seeing some of the things you mention- already feeling like I approach everything wrong with him. Sigh.

i totally get it. with one 18 year old and one 15 year old, i really get it. and honey, IT'S NOT YOU! it's kids. not fully developed brains and hormones making a mess of things. i get the whole "i work my butt off to give you the absolutely best in the world, and you think i suck" thing. again, it's NOT you.

i have followed your blog for a while, felt incredibly substandard as a mother (because hey, you try hard and CARE for your kids, and i try HARD to care for my rotten, selfish, unthankful kids), and remarked to myself how fabulous you are. and you really ARE fabulous.

it is often said that just as kids become pleasant to be around and nice people (say around 20) is the time they move out. i think between 13 and 18 is REALLY stinkin' hard. kids think they know everything, that you're (me) old and stupid and old and how could you (again, me) possibly relate to anything they're going through.

it's NOT you. it's their undeveloped brain. seriously.

you are a great mother. you did NOT blow it. traditions are IMPORTANT and, really, someday your kids will appreciate how hard you work(ed) to keep up with traditions.

sorry for the book--especially since we've never even met--but honey you are doing a WONDERFUL job. it's HARD to work, have kids, be married, COOK (man, you even cook! i totally suck), and everything else. kids are (supposed to be) self centered. it's what they do.

YOU ARE WONDERFUL, ACCOMPLISHED, and BEAUTIFUL. repeat, as necessary, to maintain sanity.

Ya, my mom always said that by the time your kids are fit to live with they're living with someone else.

We thought for years my brother was possessed, and he turned out to be a pretty nice guy.

I ache for you over Dylan. I know exactly how you feel. It's the most awful thing in the world. Hope and prayer sustains me.

Oh Jenna, I love you! Thank you for sharing tender feelings that most of us have felt at one time or another. Being a parent is so hard & yet so rewarding. I read this post aloud to Richard & Trevon was in the room. When I finished Trevon said, that is the most depressing story. (Teenagers!) and I said to him but it is 'real' and I love that she is willing to share the good, the bad & the ugly of parenthood because I could totally relate to this post. cough-Jaron-cough
You are a wonderful mother!!! and I love your tender heart!!!

I think if the teen years weren't so hard on parents and kids, they would never leave home and learn from the wisdom of being on their own. One day he and you will laugh about this birthday and the joy and love you get from him will heal your heart. The trick is holding on, trusting your instincts, clinging to traditions, and blogging about it so we can all feel your pain, learn from it and give you a boost. Thanks for sharing, hope all the encouragement helps you!

Oh, I'm so sorry. My heart aches for you. Call me.

Jenna! I completely understand. I have one of my one who will be 16 in September. I used to call him my calm child. No more. I have been trying to spend time talking to him - keep those lines of communication open :). Yesterday evening I went into his room while he was reading, sat down on his bed and said, "so tell me about school today". He laid the book across his face and said, "mom, please go away."

My friend told me she is only good for three things with her now 15 year old daughter.

I'm trying not to take it personally. :)

Lots of love your way!

I'm sorry that was such a rough day, when you tried to make it a special one!

I know I'm not anywhere near the teenage years yet (thank goodness-- I'm not ready, I need a lot more wisdom and patience before I get THERE!) but lately I've found myself viewing the kids' frustrating, annoying behavior in a different light.

Maybe part of Becky's mission was to teach me patience and forbearance with my other children. Because, I will have a child be HORRIBLE to me, and I will look at her, and I will start to be frustrated or angry-- and then I will think about how much I love her, and how glad I am she is here with me, and that I get to watch her grow up. And I hug her instead, and we work it out.

I pray that will continue through the teenage years. Otherwise I might just literally bite a head off someday. ;)

Would it be weird to say that I really liked this post?
Because it was real. And probably because I had a melt down on Valentines Day while trying to make the perfect favorite dinner and fun family activity that everyone would like (which no one appreciated or would help with) and I lost it & got upset and the fun evening was ruined and we all ate in silence.
I feel like I'm in good company! :)