I think I am nesting. This is my last full week off before we start nursing school again, and all I can do is finish projects, organize, clean, and stock up my freezer. That's nesting, right?
Several weeks ago I bought this cookbook, and it has filled me with projects, plans, and happiness: 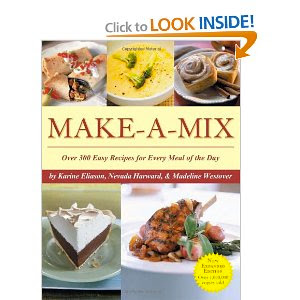 It's an old idea, yes, but the cookbook is updated and lovely. The idea behind it, of course, is to make up several master mixes to make time in the kitchen more efficient. There are many, many mixes, from dry mixes (brownie mix, muffin mix, quick mix, etc.) to spice mixes, to meat mixes and other refrigerated or frozen mixes. Being the "ant" that I am, and being as busy as I am (about to get busier), I have been having a great time. This weekend especially, I was busy stocking up! There are some changes I'll make. For example, I don't do shortening and one mix I wanted to make calls for shortening. I'll use coconut oil instead. Much healthier, same long-term storage effect.
The first mix I tried was the Snack Cake Mix. Many of the mixes are stored in big canisters, but this one is packaged into individual recipe portions, which makes whipping up a quick snack cake (like Applesauce Snack Cake, or Zucchini Snack Cake, for example) a breeze. And, easy for kids to do. The master mix recipe pages have lists of all the recipes that they fulfill, so you can quickly turn to that section of the cookbook.
One recipe of Snack Cake Mix makes 6 portions. I bagged 5 of them, and then decided to use the last one to try out a recipe. 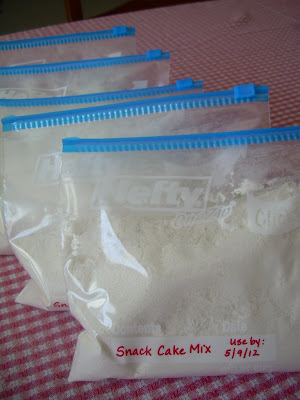 I made the Oatmeal Spice Snack Cake with Toasted Coconut Frosting. Delicious. 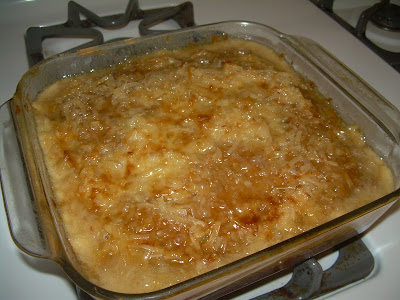 I also really loved the idea of the meat mixes. When I get home late from school (which I will three days each week this semester) pulling together dinner can be tricky if meat is involved. I decided to try the Chicken Mix, but I only did half of what was suggested, due to limited freezer space. It involved simmering a whole chicken in water with some celery, carrots, and herbs all day. (Well, it only suggested 1 1/2 hours, but I like my stock to be a bit more nutrient rich, so I left it simmering most of the afternoon.) The smell was heavenly!
Then, I took all the meat off of the bones and gave the skin and bones to the cat, who was only mildly interested. 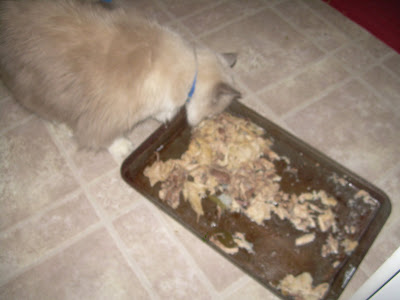 I strained the stock and then put it into the fridge to separate the fat (per Nourishing Traditions). 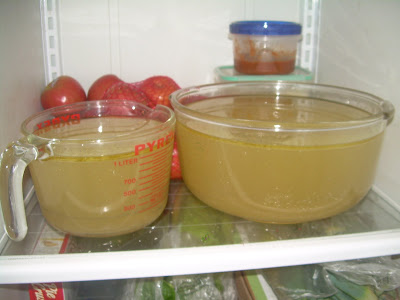 And then I took the meat and shredded it up in a big bowl. 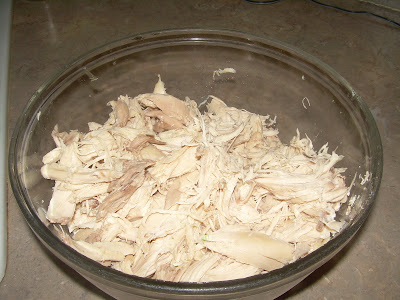 A 5 1/2 pound chicken yielded me 6 cups of shredded chicken meat, which is bagged and frozen in 2 cup portions and also about 16 cups of rich chicken stock, which is frozen in 4 cup containers. 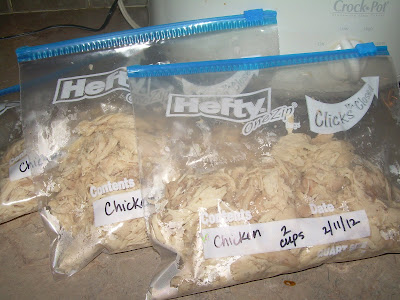 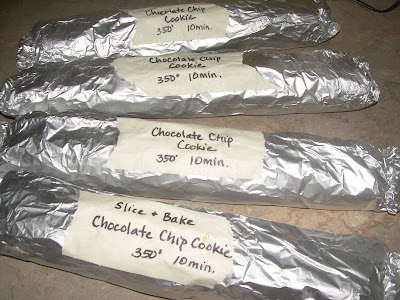 Not a recipe from the Make-A-Mix cookbook, but in the same spirit, I also made up a double batch of Italian meatballs and froze them for later dinners. 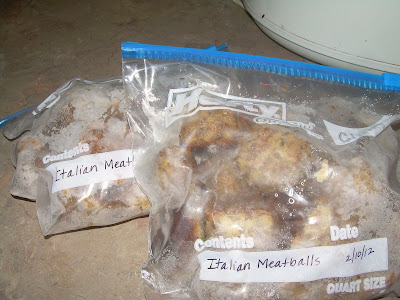 And the beans. Yes, beans. Make-a-Mix has a few bean mixes, which are basically just huge batches of cooked up dry beans, seasoned and ready to use. I use black beans most often, and I had the most of those in my cupboard, so I chose those. I followed the Nourishing Traditions method, though, soaking them with a little lemon juice in the water for 24 hours before draining, rinsing, and cooking them slowly most of the day (while the chicken was cooking.)
Here they are soaking, before the cooking. All the foam was removed from the top. 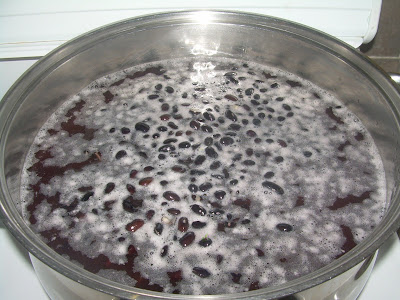 Black beans are so beautiful, I think. Now, I didn't do the seasoning part this time, because I may choose to use some of the beans in other recipes, like brownies, substituted for the oil. I've been wanting to try that out. 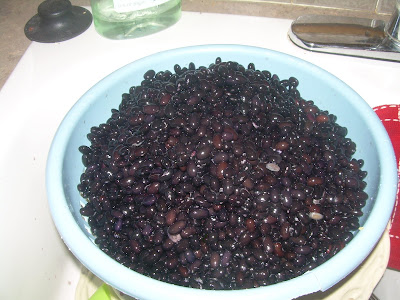 But they are bagged up in 4-cup portions and in the freezer. This is a healthier equivalent to canned black beans, and I'll just use them the same way. 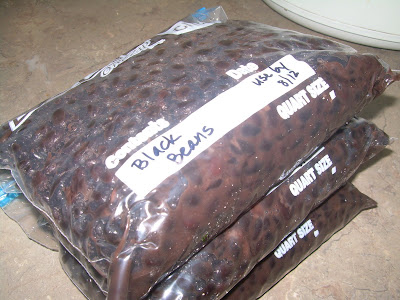 But wait! Because while all that amazingness was happening in the kitchen, I was also busy prepping for Primary! I am the Primary chorister, which is pretty much the best calling in the world. I spent several hours at the Kinko's (while beans soaked and chicken simmered. . .talk about feeling productive!) copying, cutting, laminating, and cutting. The Primary theme this year is Choose the Right, and that hymn is also the song for the month. I found great ideas on this blog (thank goodness other people have great ideas that they share so willingly!) So, I made 30 CTR shields, laminated them, and put them on sticks. We can use these throughout the year for various activities, but for the hymn, it will be a focusing activity where every time they sing the phrase, "Choose the Right", or the word "right", they will hold up their shields. It was a lot of work, but it went over well yesterday.
And I think they're very pretty. I like pretty, and I like that I happened to have sticks that matched the colors so nicely. 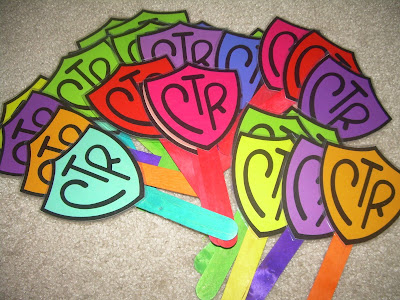 I also got this great idea for a Melody Map for "Choose the Right" complete with helper cues. The kids totally loved it. Not a great picture, but here it is set up for the first verse and chorus. 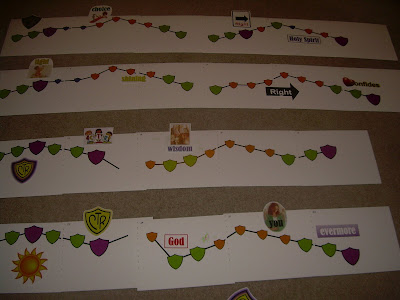 And then an even worse picture, of all the second and third verse cues that I will use. 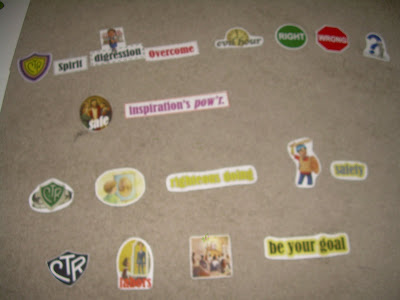 And a bound flip chart, just in case. Three verses of a hymn can be tricky for the little ones. But they always rise to the challenge. 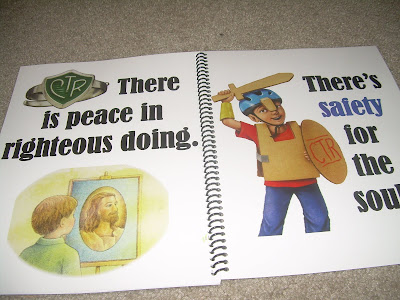 I also made all the visuals for March's song, which is a new one that I found and absolutely love, so that eases up my Saturday prep-for-Sunday stress.
Boy, looking at all this makes me feel like I had a very productive weekend! I assure you, I'm not always this efficient, but I'm feeling the crunch of limited days before school starts again. Today I will be making the master Muffin Mix, and baking something with bananas, since I have some rotting on the counter. And, I need to make something Valentine-ish for Family Home Evening's treat. Maybe a Red Velvet heart cake?
Posted by Jenna at 7:55 AM

I don't care what you think... You are Super Mom.

Yo, for reals, that's a busy weekend! I'm not quite sure I can live up to this sort of expectation once my book arrives lol. But, I'll do my best-ish. ;)

OMG! If I could be half as productive as you! I love the mix book. Our home teachers bought a copy for us a few years ago, but I haven't used it much lately. Your post has inspired me. Hope your next semester of nursing school goes well. Just remember when it gets rough it will be over soon. I can't believe how fast it went for me. Good luck.

Do you ever sleep? How do you do it? I am tired just reading everything you got done. Great job!