Morning in the Garden 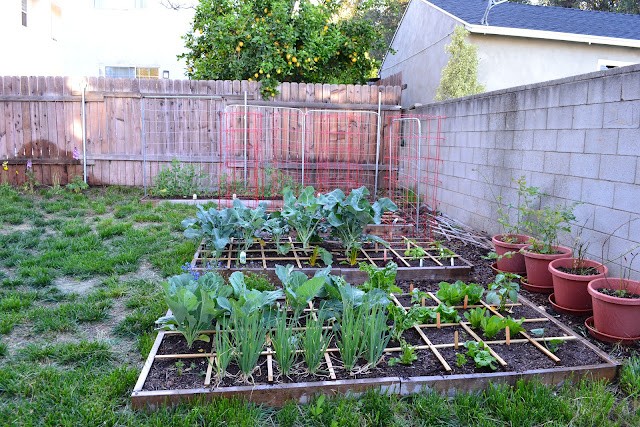 It's taken me a little over a week to get these pictures posted, and things have grown since then, but I wanted to put these up so I can have a comparison in a few weeks.  Since starting the nursing program, gardening has become more challenging for me, but also more necessary.  It really soothes me, helps me to slow down and enjoy growth, whether the tomatoes' or my own.  Growth sometimes seems imperceptible day to day.  That's why consistent evaluation is important, as is record keeping of some kind.  Gardening reminds me of that.  So, while I am loosening my expectations on the level of Spectacular that I hope for my garden, to allow myself some compassion for this particular stage of life that I'm in, I will do what I can, and share the journey with you.  Here are the first pictures of the year. 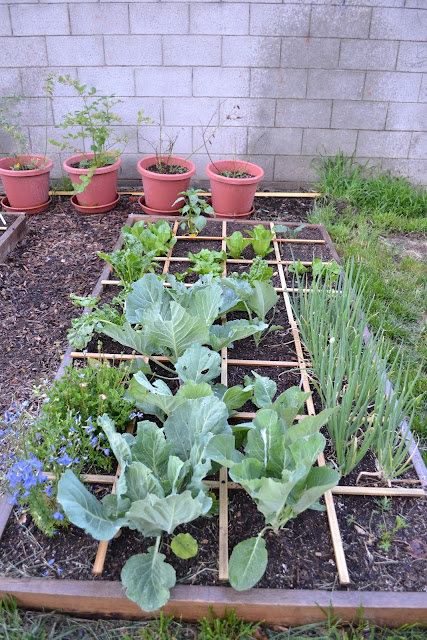 This is the first bed, and it has mostly cool-weather crops in it that have been growing for a few months.   In that first row are green onions, and some lettuces at the end, then in the second row are the remaining cauliflower plants, and in the third row are the cabbages, which I've never been able to grow before for some reason.  But all of these were from seeds I started and something just went better this year.  So far anyway.  I haven't yet actually harvested a cabbage.  And you can see I've had some cabbage worms driving me nuts.  I go out every day on a Search and Destroy mission, but man those things are hard to see.  Anyway, in the last row are some delphiniums (another in that first square in the lower right hand corner of the pic that was destroyed in a big rain/wind storm, but is growing back.) and another blue flowered plant (can't remember the name), and some chard, which I'm having insect trouble with.  I had several squares of carrots planted in this bed, and they all mostly germinated, only to have their tops eaten by squirrels, which really fries me. 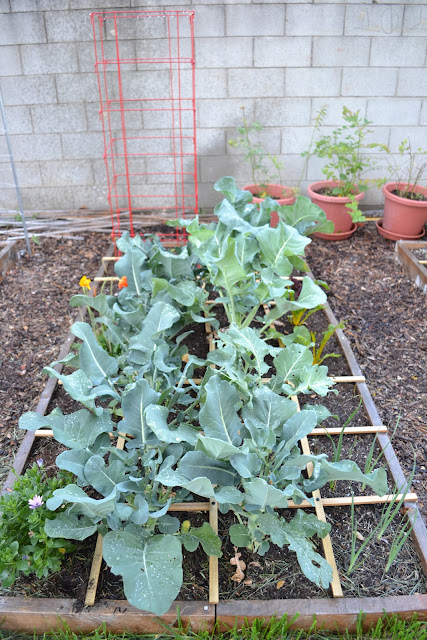 Here's the second bed, again finishing up the cool-weather crops.  There are leeks and more nibbled chard in the first row, broccoli in the second and third rows, and some flowers and baby cucumbers in the last row, which will take over once the broccoli comes out.  Hopefully. 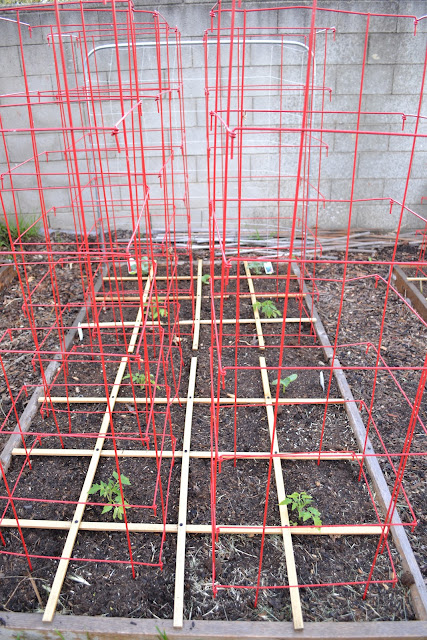 The third bed has Roma tomatoes.  Yes, I know they look ridiculous in their huge cages this early, but I needed the visual for spacing them, and I figured I might as well, since sometimes I wait too long and then it becomes quite tricky to cage them.  There are 5 plants here (Oh, there's another in that second bed, above) three in the back and two in the front.  In between the two in the front is another bush cucumber plant.  I haven't had luck with cucumbers in the past, probably because I started them from seed too late and then transplanted them too early, but this year I bought organic plants and set them in. They all have new growth, so I'm keeping my fingers crossed.

Against the back trellis, I have two Sugar Baby watermelon plants.  I've been reading about growing more plants vertically, and they are my experiment this year.  The watermelons themselves don't get too big on this variety, and I've read that grown vertically, the stems will compensate and grow thicker to support the weight, and they can also be supported with little slings made from pantyhose.  We shall see.  Stay tuned. 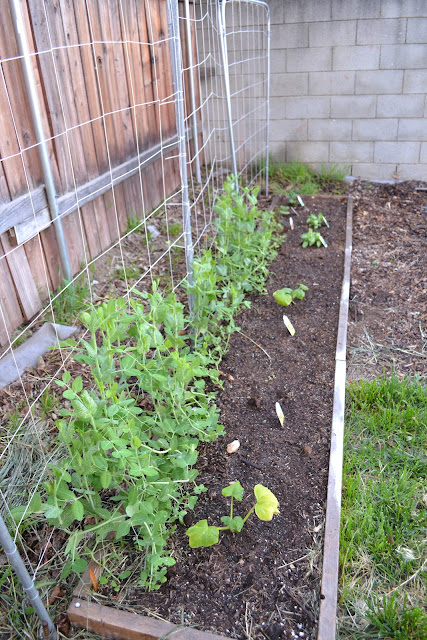 Here's the back long bed with Sugar Snap peas climbing their way up the trellising.  There are about 50 or so plants.  In previous years, I've always grown the snap peas and the shelling garden peas, but I decided against the garden peas this year.  They take up a lot of room for really, very little harvest, once shelled.  It takes a lot of little peas to feed a family, even though they are super delicious.  The edible podded peas, like these, are well-loved by my family and offer a more substantial harvest.

In front of the peas are crookneck yellow squash, two plants, and then down at the end there is an indeterminate (climbing) heirloom tomato, and two other varieties of vining cucumbers (white ones and Japanese ones), and some basil in front of them. 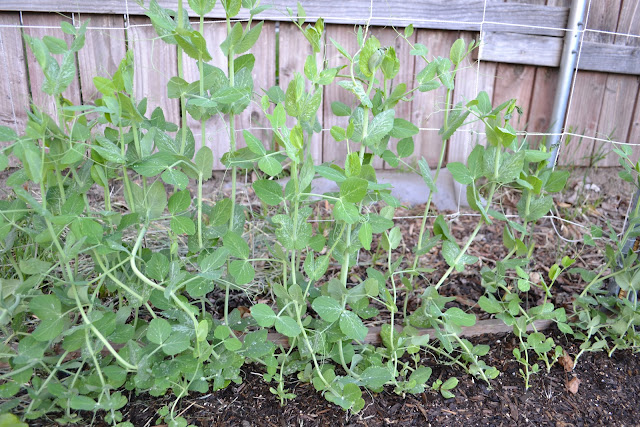 The peas, doing their thing.  I should get blossoms any day now. 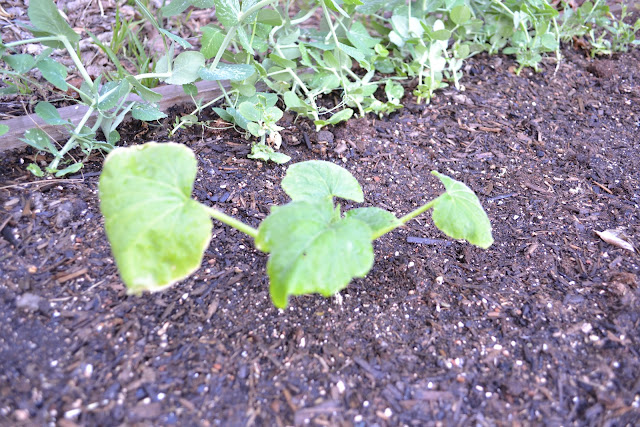 A yellow squash.  This was right after planting it and it hadn't taken off yet.  It's doing better now. 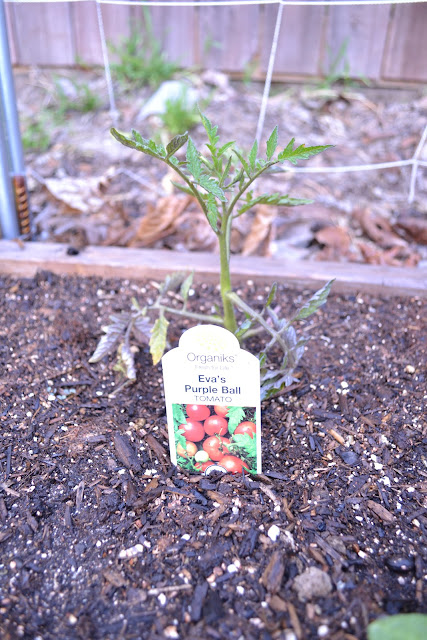 Here's my new tomato for the year, Eva's Purple Ball, which is not actually purple, but pink.  But the leaves are a nice shade of purple underneath, if you can see that on the bottom leaves. 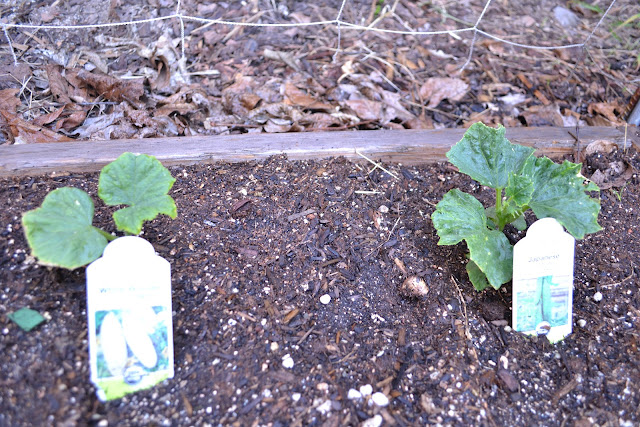 Here are the two cucumbers that I will train up the trellising.  White ones, for fun, and a Japanese cucumber. 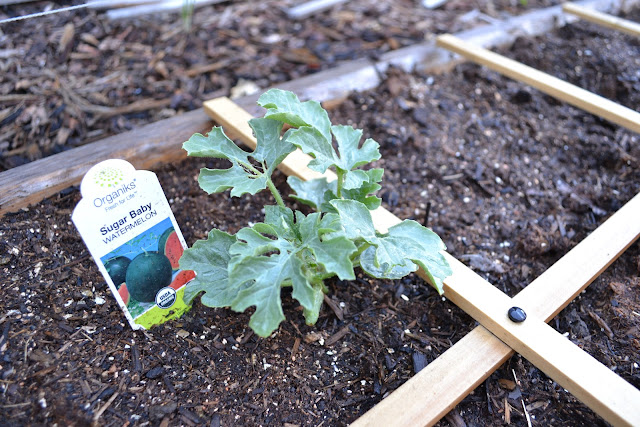 Here's a watermelon.  I did buy a number of organic plants this year.  Usually I grow everything from seed, but I just didn't stay on top of things this year with school, so I did what I could and then "cheated."  That's part of my compassion for myself.  Do what I can. 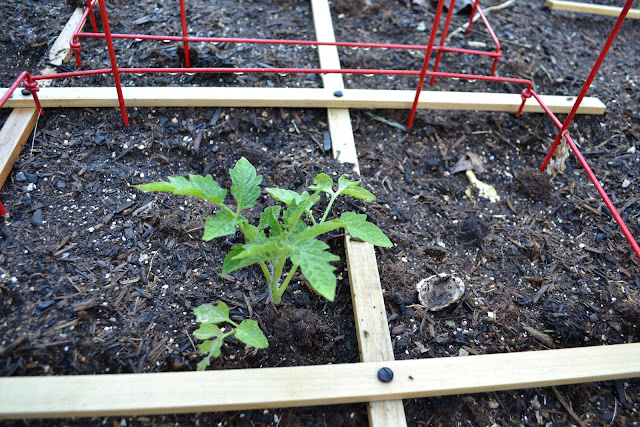 Here is one of the Roma plants.  Last year I planted so many varieties of tomatoes, and I find that what I want most is the Romas for sauce, so I stuck to those this year.  I buried them very deeply this time, to allow for a better root system.  Tomatoes respond very well to that. 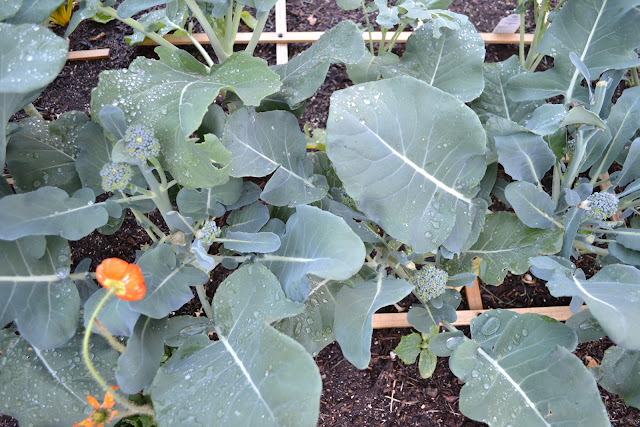 Here is some broccoli, which was all grown from seed.  The main heads have been harvested, but they continue to produce a number of offshoots, so I'm letting them hang out a bit longer.  If you can see it, though, there is a bush cucumber plant there on the bottom, tucked in that square, which will be demanding more room just about the time we kick the broccoli out.  And that's a poppy plant there on the left side.  California state flower, you know. 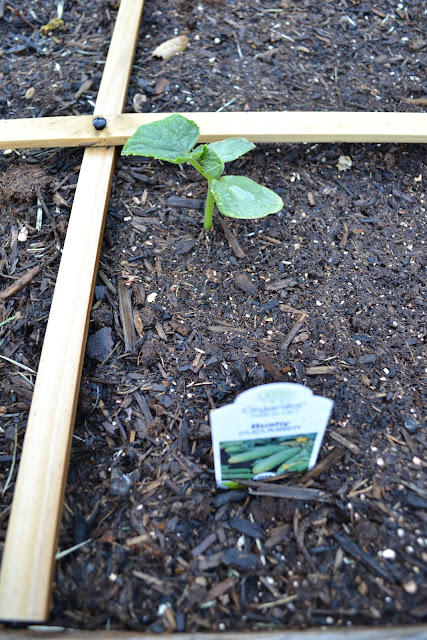 Another bush cucumber plant.  There are four of them.  I hope at least one does well.  If all of them do, please come to my house for cucumbers. 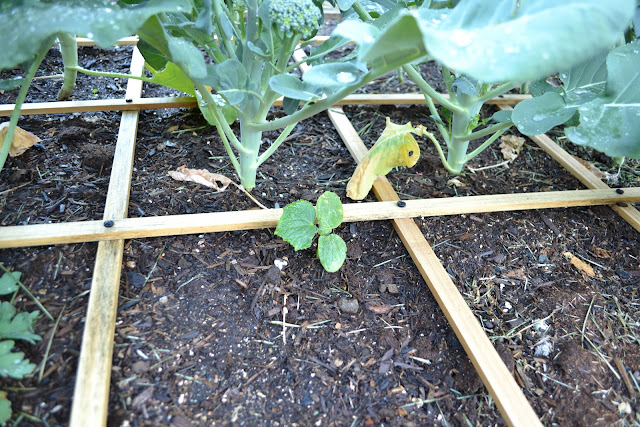 There's that little cuke-guy under the broccoli. 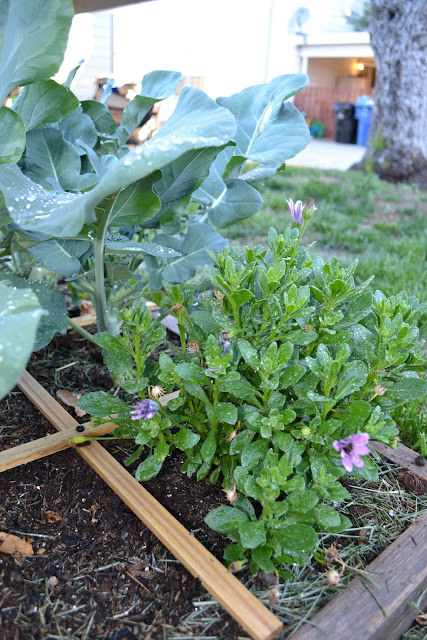 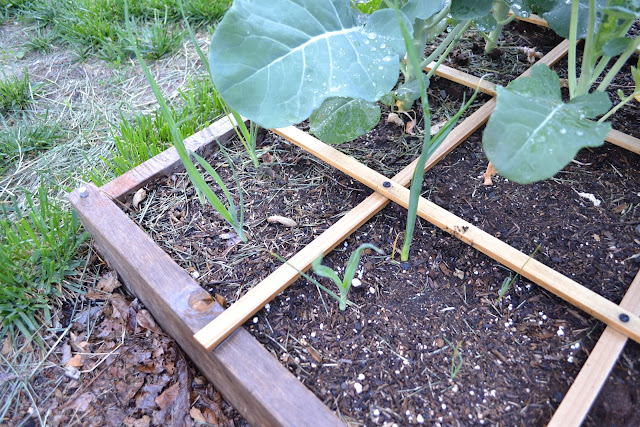 Leeks!  Only two squares of them, as a trial.  I've never successfully grown leeks, either, probably because of too-early transplantation.  I wanted to try again, but not use too much garden space on an experiment, so I only have a few of them, but they're doing well so far! 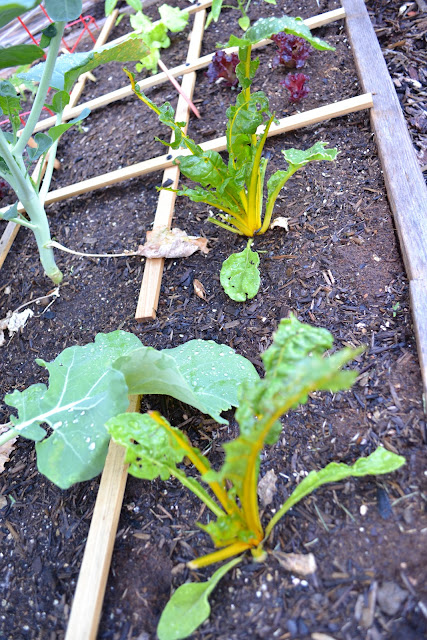 Rainbow Chard.  Buffet-style.  I do not know what is eating it, but it's starting to get on my nerves. 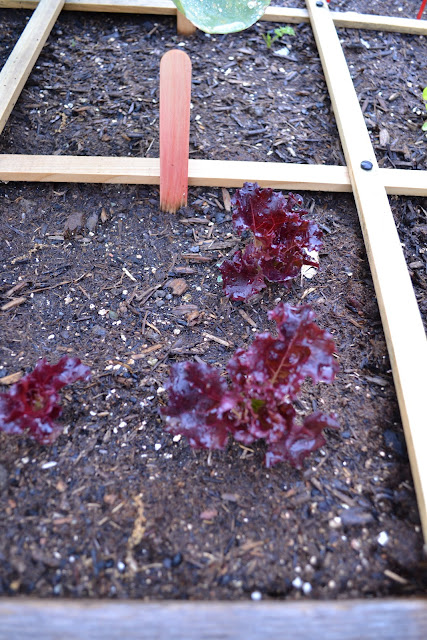 Baby Lola Rossa red lettuce plants.  These are much bigger now.  I think they are so pretty. 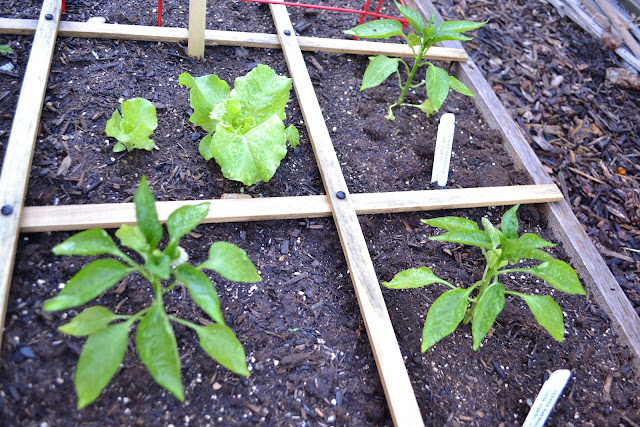 These are at the far end of the second bed.  Three red bell pepper plants and some Black Seeded Simpson lettuce. 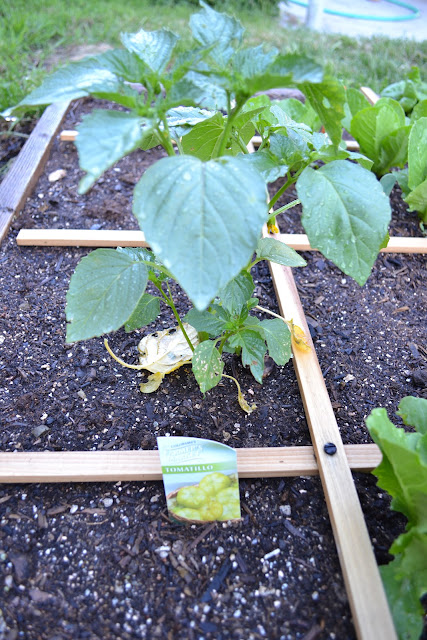 I'm excited about this one.  Last year I tried to grow tomatillos, and not one seed germinated.  Grrrr.... But I want tomatillos!  So, I bought a plant and we'll try it that way.  This guy is in the far corner of the first bed. 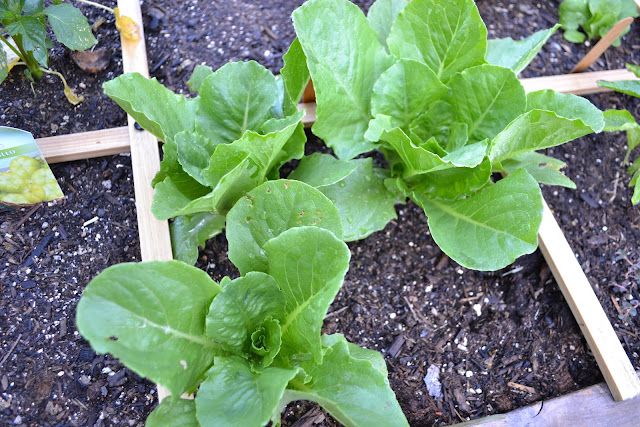 Parris Island Cos lettuce (AKA Romaine).  I need to plant another seed in that corner.  I'll do that today. 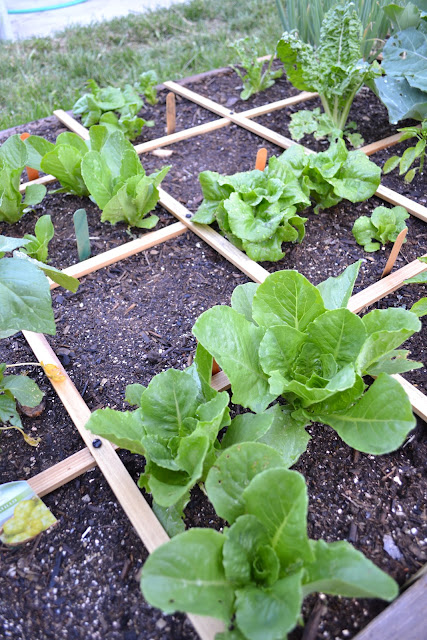 Other lettuce plants, and a so-far-untouched Swiss Chard plant. 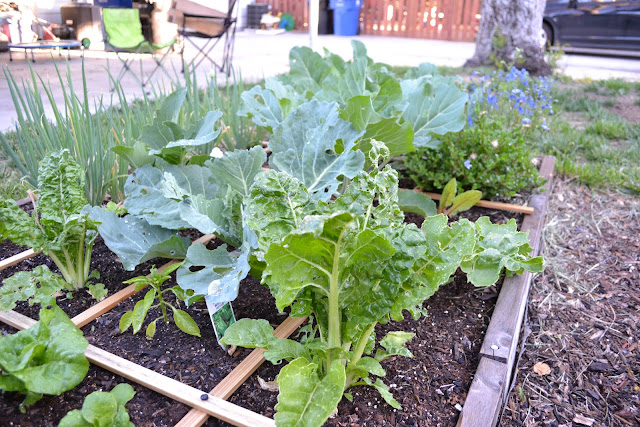 This is the first bed from the other side.  You can see where the little green worms loved my cabbage plants, and a little of that chard plant has been nibbled on.  There is a green bell pepper plant in between the two chard plants there, and just out of frame in the front is a purple bell pepper plant.  Let's see how that works out, shall we? 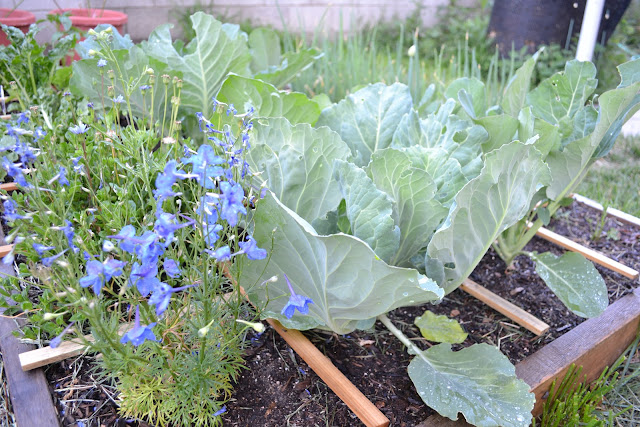 The delphinium (LOVE!) and a beautiful cabbage plant. 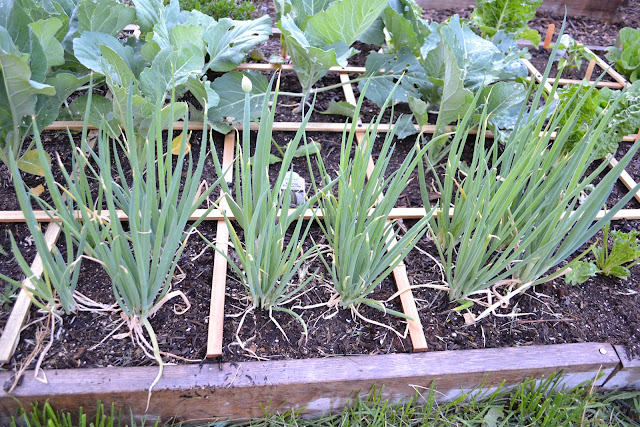 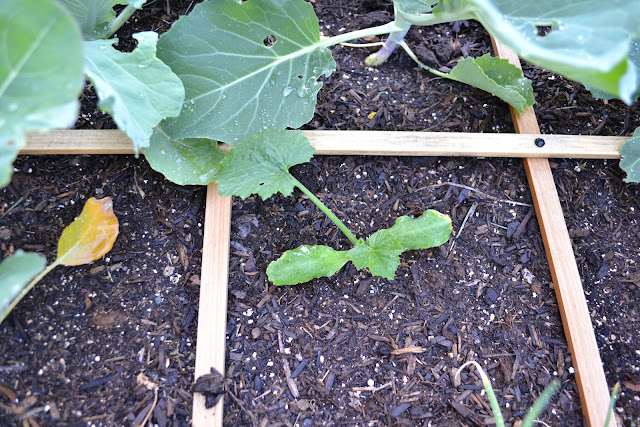 Ah, there it is!  An Emerald City zucchini plant.  There are two in this first bed, and they will have more room once the cauliflower and cabbage come out. 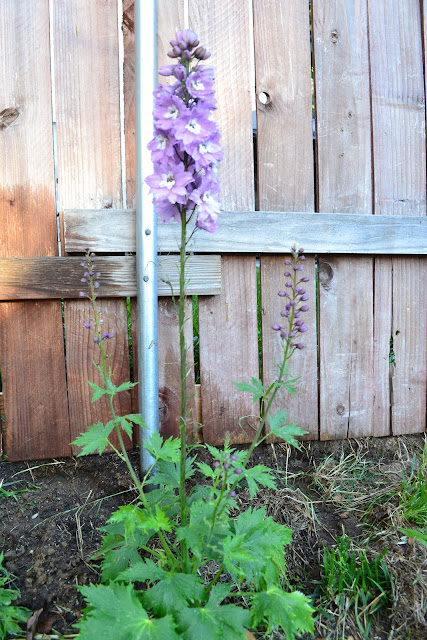 Another kind of delphinium.  Delphiniums have always been hard for me to grow too, for some reason, so I keep trying.  I put this one outside the garden beds, along the back fence (there are two actually), and I was so thrilled when they shot up their stalks and started blooming!  Now I want the darker blue variety. 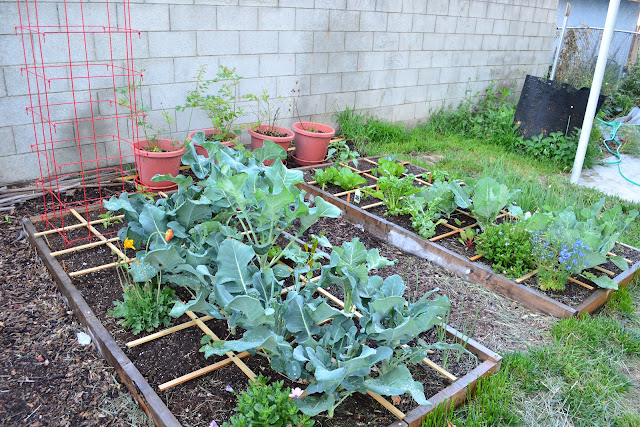 And there she is, growing, growing!  As are the weeds around my compost bin, I see.

I have a job for you.

I can't believe that your garden looks so good already. I'm jealous! I just barely put seeds in the ground and won't be able to plant my tomato plants for a couple of weeks. Even then, it could freeze and kill everything.

I'm so very envious. It looks beautiful. You're going to like the Eva's Purple Ball tomato. Very yum. Maybe in a couple of years I will be able to have a garden again.

Gorgeous! You are an inspiration. We will help you with those cucumbers. :)

this is me. Do you see my face? It is overcome with MAJOR GARDEN ENVY!!!!

I just want you to know that I always scroll through your garden pictures as fast as I can so as not to allow a ton of garden envy to build inside me.