A Date with Conor James 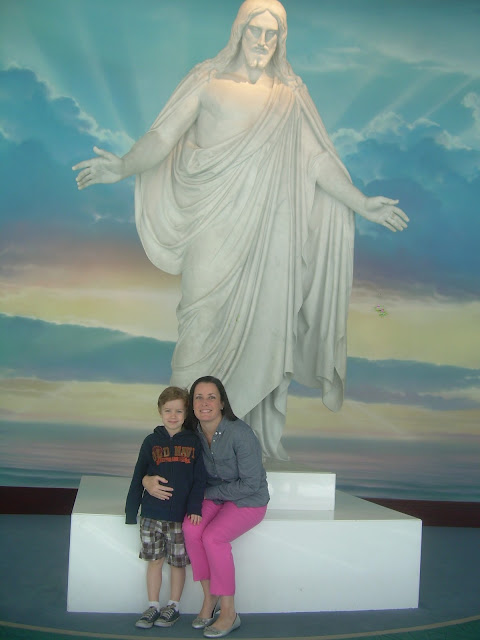 In between Lyndsay leaving to back to BYU at 3:30 this morning, and Aiden coming back from Arizona at 6:30 this evening, the day belonged to Conor.  Aiden and I try to get to the temple to do baptisms once a month as our "date".  Every month, Conor complains that it isn't fair that I always take Aiden to the temple and never him, so I'd promised him that I would take him on a date over Christmas break.  Way to wait till the last possible minute, huh?

He was so excited.  He got up early and got dressed and was ready to go.  I was so tired from being up since 3am with Lyns, and not really able to fall back asleep through my sadness, but I was also very much looking forward to spending the day with my precious little guy.  Our first stop was the Los Angeles Temple Visitor's Center.  That place is so cool, with lots of videos and interactive screens that teach about the Church and about the Savior.  I let him lead the way.

He led us straight to the coloring screens. 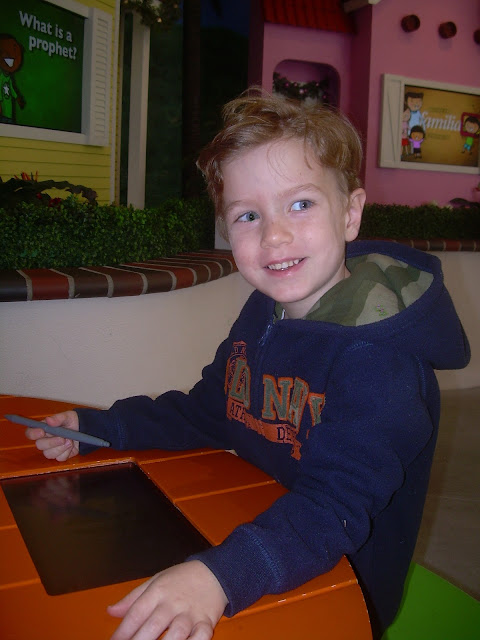 But we also watched a few films and walked around looking at the exhibits.  I love it there.  I feel so peaceful and calm.  I wish I could stay all day long.

Then Conor and I went for a walk around the Temple.  There were crews of people there working to take down all the Christmas lighting.  We talked about the special things that happen inside of temples and why they are so important.

I loved how in the Visitor's Center he started out feeling so shy when people (read missionaries) would come up to us, and the longer we were there, the friendlier he got.  As we were walking around the temple grounds he would say hi to every person we passed and say to me something like, "He seems like a really great guy!"  The temple just makes you feel good. 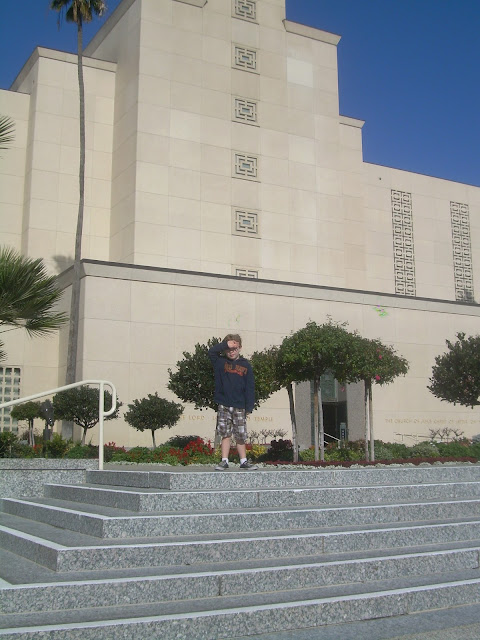 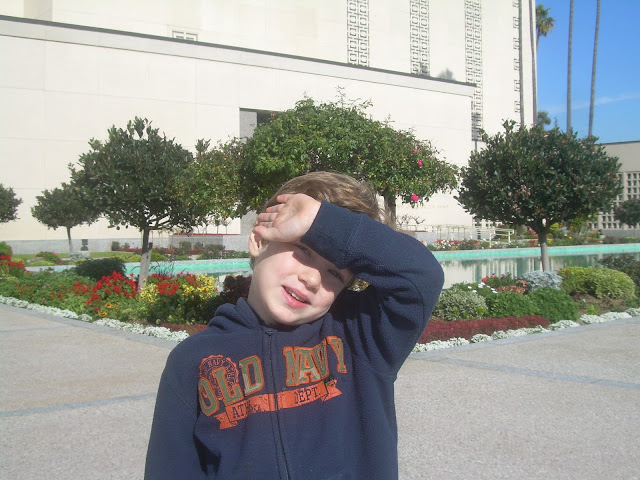 The sun, right in his eyes. 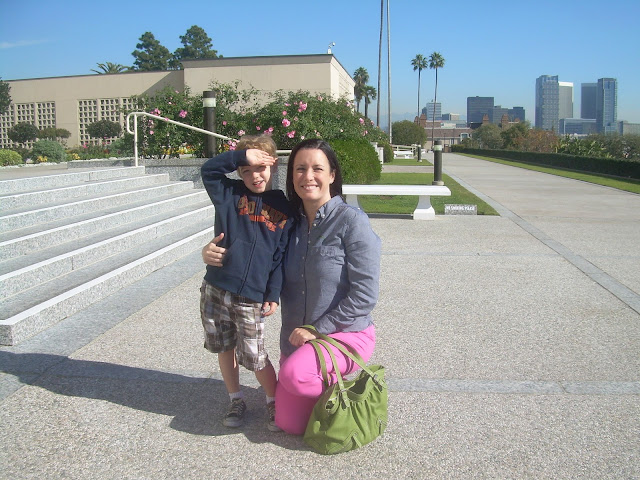 One of Conor's new "friends" offered to take a picture of the two of us.

And when I showed Conor the Baptistry doors where Aiden and Lyndsay and I come, he wanted a picture in front of them.  The first doors of the temple that he will be able to enter when he turns 12. 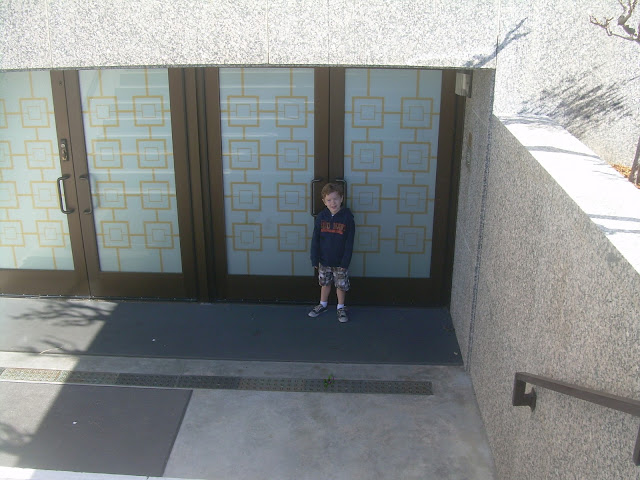 Then it was lunch time.  Conor wanted some place "fancy," so naturally he chose El Pollo Loco.  I'm pretty sure "loco" means "fancy," right?  The Fancy Chicken?  Anyway, he said he wanted a taquito, so that's what he got. 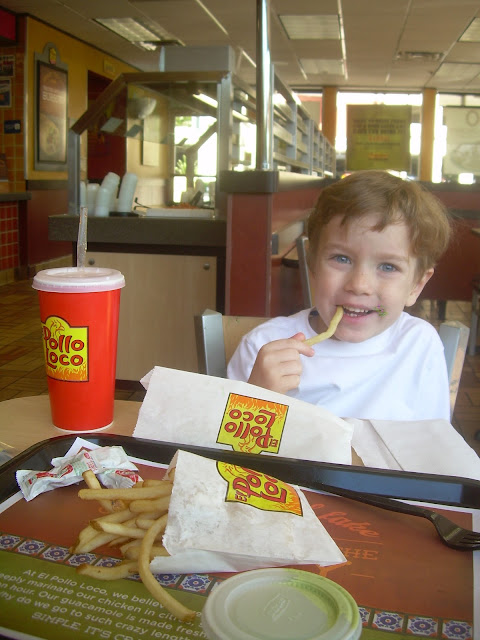 I had the Chicken Tostada Salad, which is what I always get if I eat at El Pollo Loco.  Which isn't all that often. 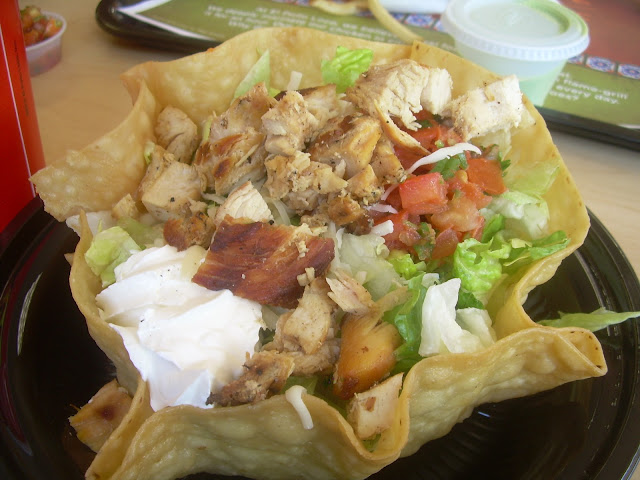 Conor got a sticker scene that he had to set up before we could leave. 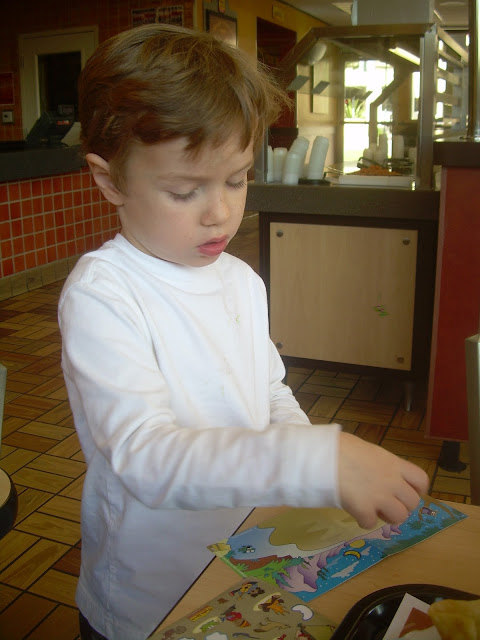 And then we walked over to the theater to see Wreck-It Ralph, which was actually cute, the parts I saw.  (I may have taken a brief nap.) 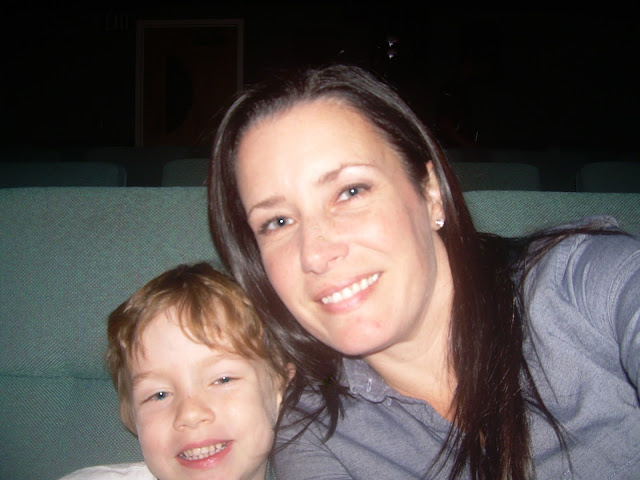 Conor's Love Language, by far, is Quality Time.  His constant plea is to spend time together.  It was such a joy to have him all to myself today, for about seven hours.  (After the movie we went to Kinko's so I could make copies for Primary.)  He was so well behaved and pleasant and full of joy and thankfulness.  I adore that little guy and I want him to know with my time.

He is one very fortunate young man, and you are very fortunate to be his mother. I'm happy you had a wonderful time together. Those feelings and impressions will draw him back to the Temple again and again as he grows. He'll remember: this is where I feel peaceful. Thanks for being a perfect daughter to the old Holiday. When Aiden is well again, I can send you family names for baptisms, if you'd like. I love you.

What a fun day! Well done.