The Garden in July 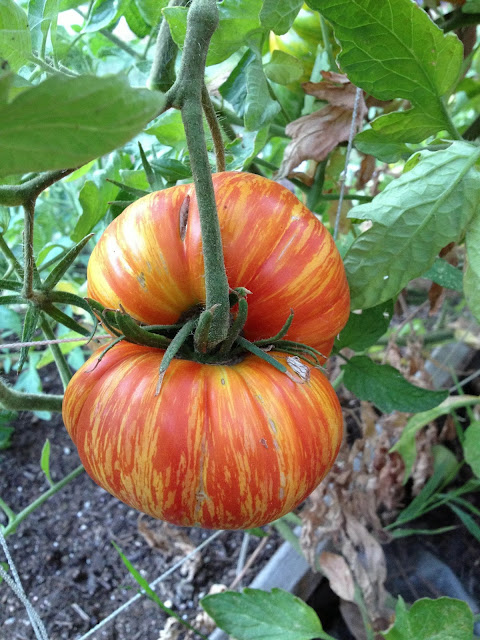 Gardening has been a bit different this year for me. It was really slow going in the beginning because of insect pests. I lost a lot of veggies. Some I replanted, others it was too late. This is the first year I have no beans, which is weird, but they all got eaten. What is growing is doing well, though, and the harvests are good, for which I'm grateful.

The Yellow Pear tomato is like a monster. I really should clip it back, but I just hate doing that. It is spilling out of its cage on every side, and has taken over all the walkways around it. My favorite is to just pick them off the plant and eat them, warmed from the sun. Oh, so good! 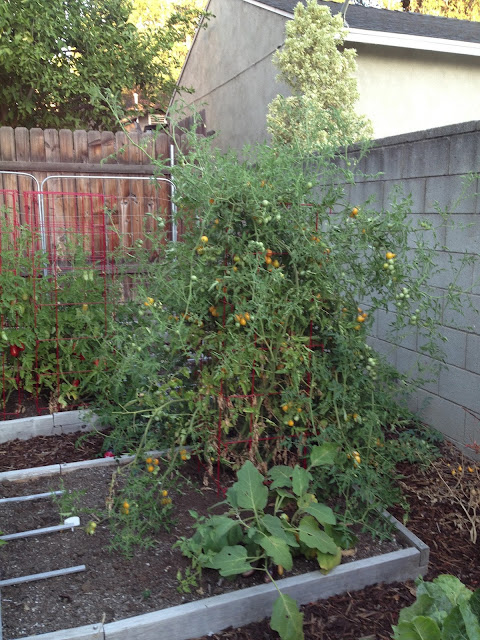 The Swiss Chard is keeping me in leafy greens for my green drinks every day. I just go out and cut five or so leaves. Sometimes I steam it too. Swiss Chard is ever faithful. It's also what spared the rest of my garden. The earwigs finished off my lettuce and then moved down to the chard. They stayed down there, and I was able to replant in the lettuce squares. Then, the chard was able to grow faster than the earwigs could eat, so the problem subsided. 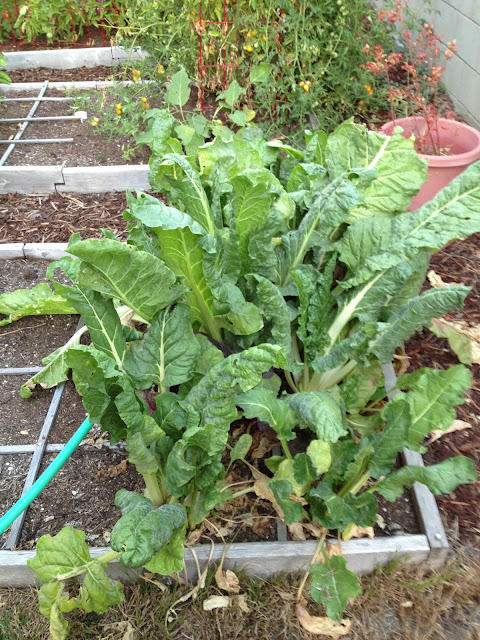 Sugar Baby Pumpkins. These are pie pumpkins, and I'm trying the vertical approach this time. I have two plants and they both seem to be doing fine. 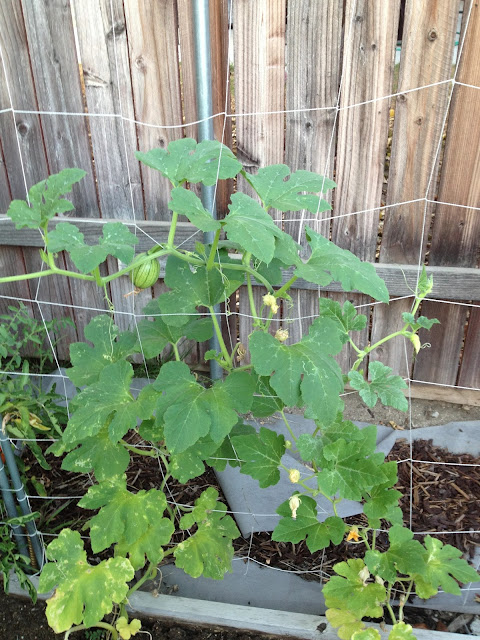 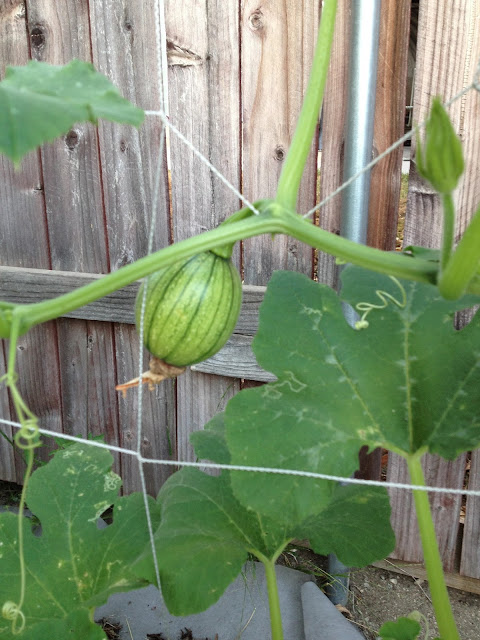 A back view of the behemoth tomato plant. 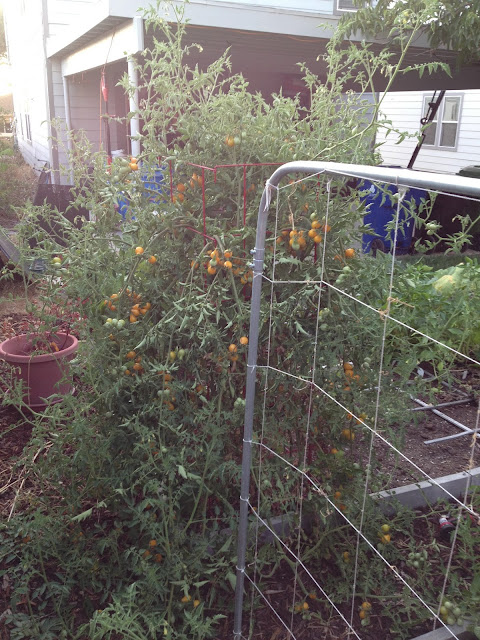 The San Marzano tomatoes are my biggest triumph this season. I had to replant from seed three times! The first time I had started the seeds inside, but put them out when it was still a bit too cold and they didn't make it. The second two times, I just stuck seeds in the ground, in the center of my cages, which were already in place. Talk about an act of faith! You really never direct sow tomatoes! But they all germinated and grew! I lost three of them to insects and replanted those, but again, success! I had no idea if there would be enough time for them to mature. The plants are definitely smaller, but they are setting fruit beautifully. San Marzano tomatoes are known to be the very best paste tomatoes in the world, and I love them. I will make as much sauce as possible, and it looks like I'll be starting soon! 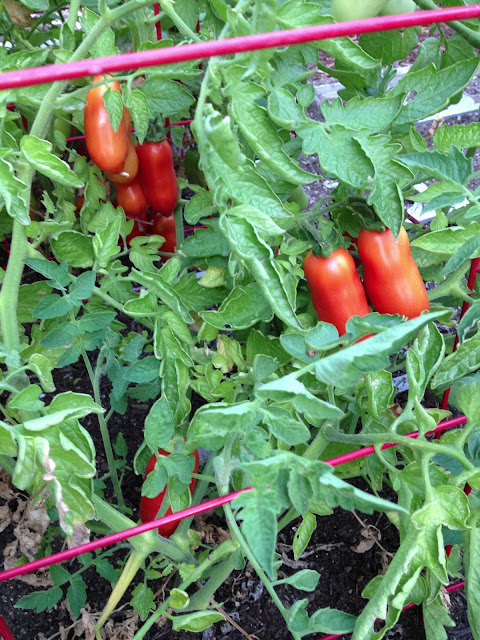 I only have one yellow squash and one zucchini plant that survived the insects, but that has been plenty. They seem to give me a nice harvest and then rest for a week or so before putting out more. It's been a great relationship. 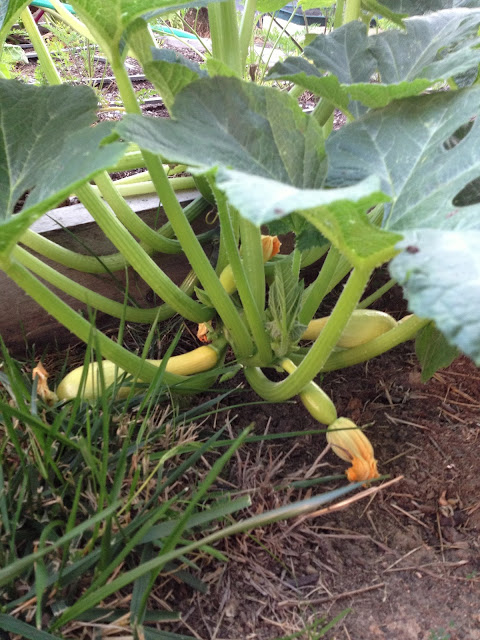 And the zucchini plant is ginormous, having branched off in three different directions all over the garden and yard. Part of the plant dies and a whole new section is born! 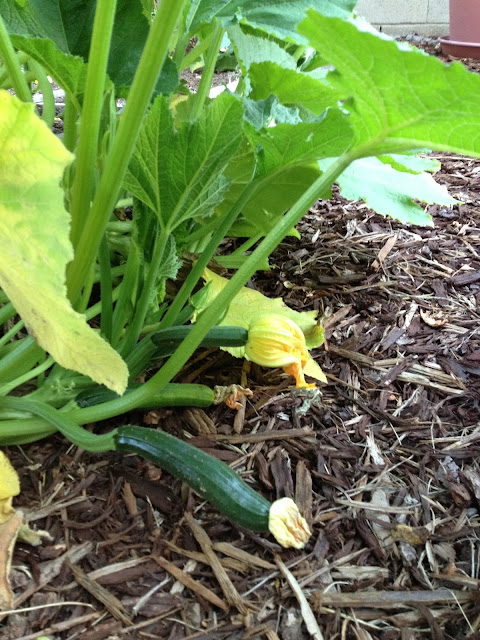 One of Conor's chores this morning was to go pick Pear tomatoes. (I wish he would help me eat them too, but I'll settle for the picking now.) He ended up filling that entire bowl and didn't even get them all. So, now I figure out what to do with them all! 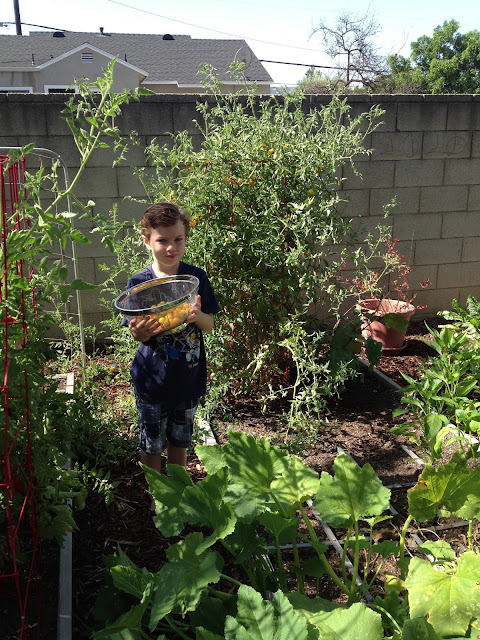 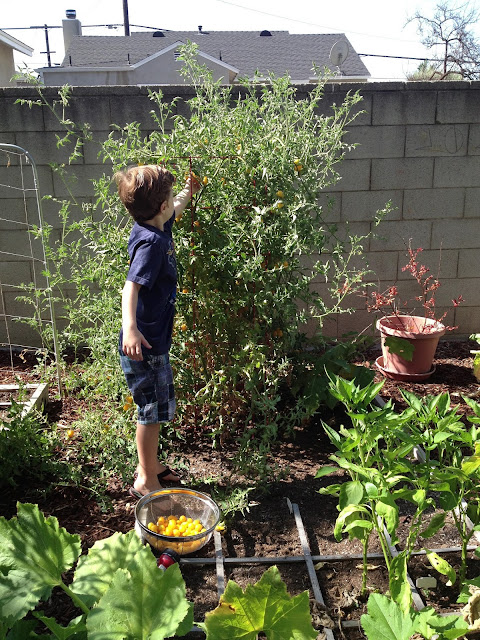 Gardens are so great for children! 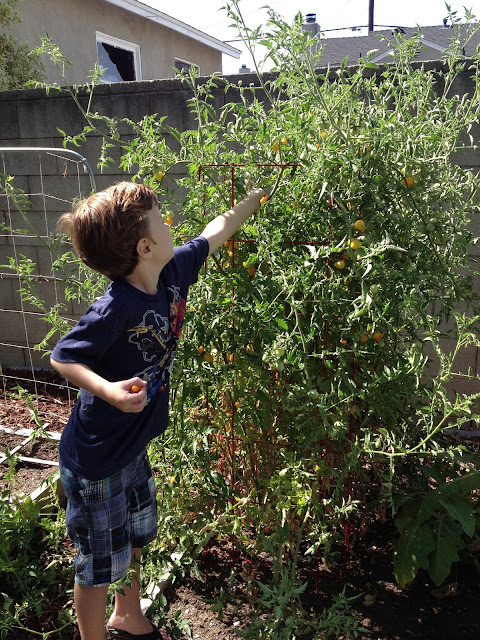 So, it's not the prettiest garden this time, and I do love pretty gardens, but I am so thankful for the food we are being blessed with. And thankful for long, forgiving southern California growing seasons.
Posted by Jenna at 11:26 AM

my sister and i were driving our kids to the Ford Theater on Saturday morning and you came up. or more like your blog. we were saying how awesome you are and how we love to read your blog posts. you're one strong momma! i love to read about all your gardening victories. :)

skull.kitten, you have no idea how your comment made my day! Sometimes I wonder if anyone still even reads my silly blog. Thank you for your kindness!

You make me want to move to CA. Our growing season is about 2 months and I've failed at producing anything.

Jenna, I love your blog! I have been reading it for years and it is the best blog I have ever read.

You are an excellent writer and really good at conveying your thoughts.