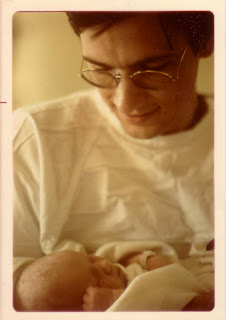 I consider myself very lucky. I come from two very interesting people, and even as an adult, I like them. My parents are cool. I admire them; I learn from them; I'm grateful for them.

But today is my dad's birthday, so even though it's late, I simply must blog about Dad. 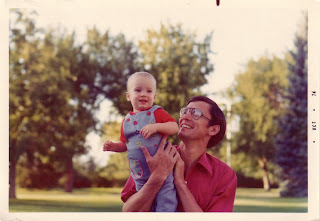 He's way too much of a character to adequately do him justice in this short post, but a few faves have been kicking around in my head as I've thought about him today.

For one, his words. Dad is a lover of words. He loves to use them playfully, artistically, and poetically. Here are some little Dad-isms from my childhood:

Peas will make you peas-ful.

Best behavior for your Savior.

Grab it, bag it, don't be a.... (well, I'll leave this one unfinished for a little family joke. He meant no harm.) 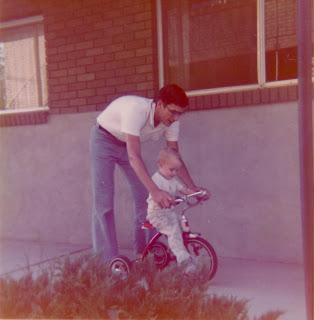 He also used to make up songs galore. Songs for everything. He would sing them exuberantly from the bathroom while he shaved in front of the mirror. Sometimes the bathroom window, which looked onto our street, was opened. This creates an unfortunate experience for a homely little girl in junior high, who is greeted by the neighbor boy down the block with, "Well, does she?"

"Does she love him? We heard your dad singing this morning, 'I wonder if she loves me anymore?" 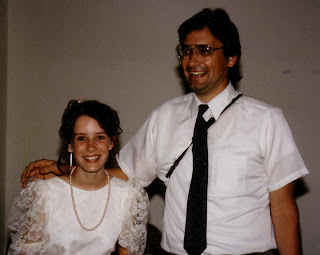 My dad used to tell all nine of us, and me in particular because of my love of journaling and maybe because of my birthright, to keep an accurate record of everything he did and said because his biographers would need careful notes.

When I was 12, I wrote this: "I like my dad. He's a terrific guy. And good-looking too. Most of my girlfriends at school think he's handsome. My dad usually takes a lot of vacations from work, and normally during that time he doesn't shave. His beard got to be pretty full and he wanted to experiment and see how he would look and how he would like having a beard. He kept it for about two months. During that time his parents teased him, 'Harvey, you look like my garbage man!' But they weren't kidding."

My dad is a tease. We never crossed a bridge without him taunting, "I hope we don't fall into the icy depths below!" And we never took a trip to the Jersey shore without him threatening to throw us in, and us begging, crying, and bribing the entire car ride. He chased my mother around the house with huge insects, and he scared our friends with this horrible Halloween mask, even when it wasn't Halloween. 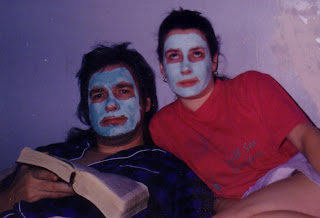 Even now, my children live the tale. A few years ago, when he lived a few streets away from us, my kids loved to ride their bikes to Grandpa's house. He would give them push-pops and show them his fossil collection. He would teach them about all the species of birds that would visit in his backyard where he maintains a veritable bird sanctuary, complete with a hen house he built and named the "Chicken Cacciatorium". 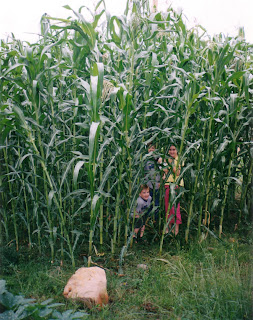 He grew this genetically engineered corn seed he had gotten through some mysterious means, just because he hoped the newspaper would want to do a story about his miraculous gardening techniques. This corn reached the electrical wires. It was freaky. The neighbors would ask for his soil amendment secrets, and every day he would go out and look at the new growth and throw his head back in cackling laughter. That's Dad, for ya.

And he told them there was treasure buried in his yard, and all they had to do was dig it up. Day after day, my little ones would race through their schoolwork so they could ride over to Grandpa Holiday's to dig for the treasure. He would encourage them along, telling them how close they were getting, and day after day they'd come home sweaty and tired. The hole got bigger and deeper, but no treasure.

"You're just joking us, aren't you, Grandpa," they caught on.

"No, no! There's treasure! This morning I tapped with the shovel and I think I heard metal!"

It got to the point that even I had to interfere. My babies were planning on what they would do with the loot once they unearthed it, and I was anticipating their broken hearts, when once again they would be duped by silly Grandpa. "Tell them the truth, Dad," I said. "Stop lying to my kids!" He held on stubbornly and laughed his head off, as he's probably doing right now while he reads this. And though there never was any treasure, my kids sure have a gem of a memory of their Grandpa Holiday.

My dad's life would be the most fascinating novel EVER, I kid you not. He's the most interesting man I know, BY FAR. Really. He has not been perfect. But he has faced his imperfections with humility, and I've watched him deal with loss, disappointment, and trial with unfailing faith and fortitude, and forgiveness. He never stops learning; can't get enough study. He's the most brilliant person I know, but he's also the most humble. He was my rock during the hardest years of my life, and he continues to offer me quiet strength and the wisdom of his perspective. I cannot even imagine my life without him being there.

I do not use the word lightly when I say that my dad is my hero. I count on him and look up to him more than he knows. I never want to let him down.

"My daddy is my favorite pal,
And I help him every day.
It's plain to see I want to be
Like him in every way.
He teaches me that honesty
Is best in all I do.
I'm very glad that he's my dad,
And I know he loves me too." 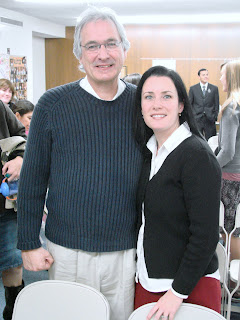 Happy Birthday, Dad. As you have told me, I love you a mountain amount.
Posted by Jenna at 7:26 PM

What a beautiful birthday tribute! I loved reading every word of it. Not only because every paragraph was so perfectly laid out, but because it's like I'm reading about Josiah. I love seeing how much he is like his dad. He actually quoted your dad the other day with the..."Best behavior for your Savior." Josiah sings in the bathroom too...I'll spare the words to the songs, but they are always from the heart! Fortunately, we don't have a window in our bathroom!

If you're reading this Dad,
Happy Birthday! I thought about you several times today, but was out and about for most of it. Hope it was a good one for you!

That was beautiful Jenna. Your dad sounds remarkable.

This cracked me up but also warmed my heart. He is quite unique, isn't he?

What a character! And what a lovely tribute to him.

Your dad sounds awesome, and how lucky you both are to have each other!

You are a very lucky woman, Jenna. I mean, how many daughters can actually say they have had a facial mask sessions with their dad??? That was my favourite part, plus, the corn.
Rock on, grandpa!

Great post, Jenna. My dad's B-day is this month too. You've given me some great ideas to write about him.

Your dad sounds fascinating. I hope someone writes that novel about him.

Aww, now I'm all misty. Many happy returns of the day, dear Holiday!

I'm so glad you have a wonderful dad! That can mean so much to a girl.

Happy Birthday to your dad!

How lucky you are to have such a great dad! I loved the Chicken Cacciatorium and the corn! And he's still handsome too!

Wonderful tribute to the Dadhood. They are not "used to's", he is still singing a new song every day. The latest is:
He's sick and he's sore
he's old and he's poor
besides that, he's doin' pretty good (add your own tune).
And yes, he loves you a mountain amount.

I love the pictures in your sidebar--really beautiful! And Happy Birthday to your dad!

I really enjoyed the tribute to your father. I have the opportunity of working with your father and he is a wonderful guy. Very humble and always has a smile on his face. In the office, a prior worker left a plant. Your father has named the plant Robert. This plant has blossomed under your father's watchful eye. When he was going on vacation, he even emailed me on how to care for "Robert". And he's always the first to uplift all of us. Thank you for sharing him with us!

What a great tribute to your dad, he sounds like a great man. I know I don't tell my dad how much he means to me near enough!

Aw shucks, gee whiz. You're so nice to the Ancient of Weeks. I think songs and silliness can take the edge off this difficult life. As for the treasure hunt, the location of the loot was revealed to me in a dream, as I told your kids at the time. Of course, I would have ignored it, but they insisted, so I merely showed them the very spot in the yard, and they did the digging. I'm sure we were only inches from the chest when we stopped digging, and there are two reasons why I believe this is more than the residual effects of the 60's on my mind. First, if you dig anywhere else in my yard, you'll come to large rocks within a foot or two of the surface. There were no rocks at the spot we dug, as your children will attest, and that suggests that someone had previously dug in that very spot and removed the rocks as he prepared the resting place for the Spanish jewels. Secondly, about four feet down, we found old pieces of worked iron. I have these on my mantel at home. Someone had dug there before! A little more patience, a little more digging, and we'd all be in Fat City today. Faith, my dear. Your kids know the truth, and someday, we'll get back into that money pit and find the chest. I love you. Thank you for thinking of me on my birthday, and thank you to all your friends and family who wished me well in my decline. By the way, I think the local airport had to change its air traffic patterns because of my corn. And there was that Fee Fi Fo Fum giant that tried to climb down my corn stalk ....

Ahhh hahaha..dad has me cracking up

I love this post. You are a very lucky girl. You really do have a great father. This was a very nice tribute to him. And his comment to you went perfectly with everything you said about him.

This is a beautiful tribute. Happy birthday, Jenna's dad!

This is a great birthday tribute, Jenna. I enjoyed reading it.

I appreciate your blog, and am passing along the "You Make My Day" award to you.