On Gliding and Soaring

Driving down the 210 Freeway yesterday, I noticed five large birds gracefully soaring over a mountain top. I watched them, and marveled. I remembered a science lesson I had taught the boys a few months ago during our in-depth study of birds: gliding and soaring are different. I had never thought about it before, and maybe I had even used the terms interchangeably on occasion, but they are not the same.

The very fact that a bird can fly is an interesting lesson in physics. It begins with the airfoil, which is the shape of a wing, and then involves flight terms such as air pressure, lift, drag, and thrust.

In the 1700's, a scientist named Daniel Bernoulli performed experiments with objects under water which help us to understand how things are able to fly. Water, like air, applies pressure to everything it touches. Daniel Bernoulli discovered that water moved differently over the top of an airfoil (wing shape) than it did underneath it. Water going over the wing moved faster, while the water moving on the bottom of the wing stayed the same. So, the water on the bottom of the wing pushed up more strongly than the water on the top of the wing pushed down. In the air, this difference in pressure causes lift, and the bird is able to get up off the ground.


The bird must flap its wings to speed up the air moving over its wings and this creates a force called thrust. But even though the speed of the air going over the wing allows lift, staying up in the air is a challenge, because another force called drag pushes against the bird as it flies.

If you watch a bird fly, you see that it flaps its wings for a while and then sort of coasts through the sky with outstretched wings. This is called gliding. The longer the wingspan of the bird, the longer time it can glide, but gradually the bird will drift downward because of the drag on its wings. After a time, the bird will have to start flapping again to overcome the drag and gain lift. 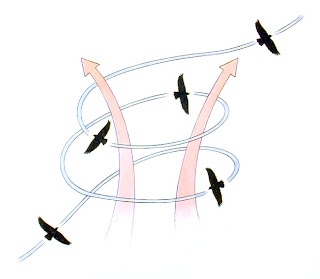 Soaring, on the other hand, is more like surfing for birds. Surfers live to "catch the wave". If a surfer catches a wave, he can then ride it all the way back to the beach. In the air, there are heat waves called thermals that rise up from the ground. Soaring birds are designed to know where these thermals are and then to jump on top of them and ride. In a thermal, the rising warm air will lift the bird higher and higher. Some thermals are very tight and the bird must then soar in a tight circle, but other thermals are very large and the bird can go a great distance before having to turn with the heat wave. Thermals form early in the day, as the ground warms up and that warm air rises, and I imagine that besides the advantage of giving birds a chance to look for food without expending the energy of flying, soaring must also be pretty cool bird recreation.


I think I have periods of gliding and soaring in my life too. Gliding is when I can coast for a time on work or effort I've previously expended. Like, if I clean my house really, really well, I can glide for a time without having to worry about housework and the rooms stay fairly tidy. The drag is (and the pun is completely intended) that life continues to happen and dishes pile up, floors get dirty, and nobody has anything clean to wear. The mess returns and I must flap my wings to get back on top of it all.


Gliding might also be when I eat healthily and exercise regularly and I am able to lose a few pounds or maintain an ideal weight, and so I coast for a while on that effort and jump off the bandwagon to enjoy some guilty indulgences like ice cream, or too many cookies, or the most decadent brownies. Before long, the drag has pushed against me and I must get my butt in gear, literally.


I may also go through periods of spiritual gliding, when I drift away from a daily routine of scripture study, and my prayers become more rote than sincere. I can coast along for a short time on my stored up testimony, but quite soon the drag works against me, and I find myself slipping. I must exercise my spiritual thrust quickly, and flap like mad.


But I have times of soaring in my life, as well. To me, soaring is more personal, when I can "catch the wave" or "ride the thermal" that God has designed me to instinctively find and then it feels so right and so good, that it's almost effortless. It's as if He and I are riding together as co-pilots. We're protected from the drag. No one else can see my thermals, just as the thermals that the hawks ride are invisible to our eyes. But just as I can see the hawks soaring and know that they've found one, I believe those around me can sense when I've found my own thermal and I'm soaring.


I've had times in my life when something that I'm doing becomes so effortless, I feel as though I'm soaring. Sometimes I call it being "in the groove". I think using our God-given talents, or when we are in line with our personal missions in life we are swept up into thermals and we can freely soar. At times when I'm writing, or teaching, or mothering, or playing a piece on the piano, suddenly the effort is gone, and I stretch out my wings, and I soar. I'm soaring when I'm in complete harmony and peace in each of my relationships and I am so filled with pure love that I feel like I must be glowing because of it. I'm soaring when I'm lost in the service of other people. It's as though I'm completely in line with what I was put here to do, and I'm filled with a euphoria that witnesses to me that I've found my thermal.


The trick then, is to balance out the gliding and the soaring, and to know that to everything there is a season. For birds, thermals only form in the early hours of the day. They can't just soar in circles all day, avoiding the work that birds must also do. There are nests to be built, and eggs to lay, and mates to find (well, fortunately the birds get the order right more often than we do!), and young to raise. There is food to be found, and migration to prepare for. They know their season. They know there will be another thermal to ride tomorrow, and though there will be lots of flapping, there will also be some gliding to rest tired wing muscles. 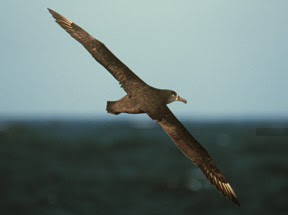 And there will be rejoicing because they can fly.

Beautiful and brilliant post. Thought-provoking in oh so many good ways.

Have you considered submitting it to The Ensign?

Hmm I guess if I had been more diligent checking out your blog, I would have known you were local! haha. So busted. Anyway, thanks for the science lesson! I just started going to Trivia nite at the new Barney's Beanery in Old Town Pas. I'm sure it'll serve me well one day!

i love how you also related this to spiritual ups and downs. thanks for the great food for thought to ponder. i added this to my shared articles in my google reader. want to ponder it further.

Jenna, you are amazing! I love this whole concept. It really is how are lives are. I seem to be in the drag part trying to remember how to flap my wings. This is great though because I get confused and think that there should be more gliding and soaring and less flapping. I forget that the gliding and soaring are short term and the result of effort. Thanks for sharing this. You have no idea how much I needed this right now in my life.

You're such a love.

Wow, thank you. I love soaring and wish I could always but your right, most often I'm flapping away like a duck-- no more like a penguin.

An awesome post, educational and reflective, thought provoking and sensible. Loved it.

Wow--beautiful post. I've never thought of things in those terms. You certainly have a gift for expressing yourself. You should find somewhere to submit this because it's very thought-provoking.

jenna,
i agree with rebecca. consider sending it in? like to the Ensign or something? it is so good. i am still pondering it from the weekend when i first read it.

something for you to ponder at my blog, i posted it last night. i can't believe i let this out of the bag!

Very good article! It brought back memories of Physics class when we demonstrated lift with pieces of paper.

Thanks so much for this. It prompted a great physics lesson from Greg (who, by the way, thinks you're a great writer!). I also love the comparison to life. So true.

I'm the kind of hombre who passions to try new stuff. Presently I am fabricating my personalized pv panels. I am making it all alone without the assistance of my men. I'm utilizing the internet as the only way to acheive this. I discovered a very amazing website that explains how to make photovoltaic panels and wind generators. The internet site explains all the steps needed for solar panel construction.

I'm not sure about how precise the information given there is. If some experts over here who had xp with these things can have a peak and give your feedback in the site it will be grand and I'd really value it, cause I extremely enjoy solar panel construction.

Thanks for reading this. U guys rock.

You have to express more your opinion to attract more readers, because just a video or plain text without any personal approach is not that valuable. But it is just form my point of view