He grunted. Loud and low. He groaned, and he strained beneath the load. He moaned and needed a break, but there was no time for rest. Blood vessels burst leaving dark bruises on his arms. Sweat dripped from his face and down his back.

Okay, not so fast! Slow down, nice and easy.

Okay, now hold it, hold it.

More groaning. Primal grunts, (and maybe some swear words). It just didn't seem like it could fit. But it's halfway done, so now what?

Can we turn it? Can we lift it just a bit and ease it around?

Push, push, slow it down.

Now one last time, give it all you got!

Ah, sweet relief! And here she is! 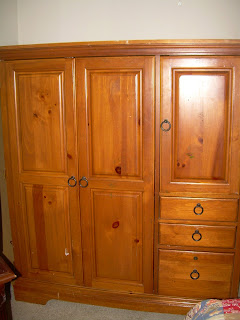 Four men. Four strong men, oozing with testosterone, (and one with love for his wife), and it only took an hour to get it up the stairs and around the landing into our bedroom. The walls were only marginally damaged. Nothing that some wall putty can't fix. Well, maybe some things that wall putty can't fix.

All that sweat, all those muscles. (Maybe even the swear words.) Kind of a turn on. It was a full afternoon. I didn't know whether to cry with the stress, laugh because of the sheer hilarity of the situation, or run from the room so I didn't have to witness death if that thing should come crashing down on top of them.

3 hours each for the labor of two Mexicans picked up on the street? $60

"furniture moving straps" that were only a little useful? $12

Listening to your husband barf his brains out in the bathroom after the exertion of lifting said armoire up the stairs with three other guys for an hour just so you can have this beautiful piece of furniture for such a steal and as your Christmas present?

Mental note: Don't ever decide you'd like it better downstairs. Ever.
Posted by Jenna at 4:14 PM

Ooooh! So pretty. I'm very envious. And yeah, watching your man lift heavy objects for you is seriously a turn on!

This made me remember the time I dragged that disgustingly heavy bookcase dad built up the stairs in my old house on my own not long after giving birth. I was screaming and sweating but hell bent on getting it up those stairs.

I'm sure it's a victorious vomit for Adam. Teehee. Aww poor guy! Give him a hug..maybe a smack on the butt.

And not only had you better not like it more downstairs, you had better not ever move. :o)

It was a steal!

And you made me lol, I could feel the heav-hoing.

Beautiful! and what a gift in that hubby of yours.

What a great present!! He sure does love you.

I agree with your mom.. you can NEVER move! hee hee