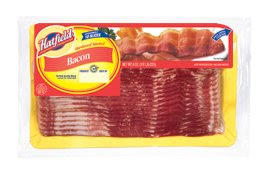 I got a little chuckle the other night when I opened a package of bacon to cook up for a potato topping, and I saw the label:

I thought to myself, "Bacon, really, now. Carbs are the least of your problems!" But then again, I thought to myself, "But good for you, bacon, focusing on the positive. So you're loaded with fat and basically zero nutritional value. At least you don't have carbs, right? So work it, bacon, work it."

But, you don't see bacon shouting out that it's loaded with the worst kind of fat ever, do you? Or sodium nitrite? Or that it comes from an animal that eats what no one else wants, and rolls in mud, now do you?

No, it proudly boasts that it has zero grams net carbs. You go, piggy.

And so, I will resolve to be more like bacon. I will proudly declare that I can bake a great cake. I make great soft pretzels, and my red sauce is to die for. I have eyes that dazzle turquoise when the sun hits them just right, and I have a decent alto voice. I can express myself fairly well and am confident speaking in front of others. I like my skin, and I like the way I see the world. I think I'm a great mother, and I'm determined, forgiving, and kind. I like that about me.

And you dared to argue that bacon was a blessing to the world? I told you so.
Posted by Jenna at 8:29 AM

I love this! From now on, this will be known as The Bacon Principle.

You're awesome Jenna. That's about all I can say to sum you up. Pure awesomeness.

i'm suspecting that they feel far too people are buying bacon so they needed to "lure" them in with a little ingredient manipulation...

Brilliant perspective, Jenna! I'm going to stop panicking about how messy my home is and start focusing on how much cleaner it is than it was two years ago. Positive thinking - yeah!

I've always liked bacon. Now I like it (and you) even more.

This is awesome, sweets. Nice way of looking at things. And please, the majority of things I wish I did better is being compared to *you*. While you don't feel on par or whatever with others..most don't feel on par with you. Think about that one, too. You're fabulous at too many things to even consider putting yourself down!

And when you said the thing about the eyes..awww all of a sudden I saw Jenna on a beach with twinkly turquoise eyes. Awwww, you beauty queen!

You, my dear? There's nothing negative to accentuate. It's ALL positive on the Jenna front!

All I can say is I love bacon and I love Amy Grant and some of my friends hang out here so here I am!

I love this! My friend is obsessed with bacon and I'd love to share this with her and others. Is there some way to link your blog to my Face Book page?

So if I said I want to be more like Jenna, would that be working against the Bacon Principle?

Yes! No Carbs! I can now eat bacon guilt free! Thanks, Jenna! :)

I got no carbs either or I'd have more energy. Love that attitude!

Bravo friend! Positive thinking is the only way to survive life! Well said!

You ARE incredible!! Girl power!

PS.. now if we could get the media outlets to adopt "The Bacon Principle" (thanks Annette!) We would see that the world is NOT coming to an end. :)