Hallelujah! Woe is Me. 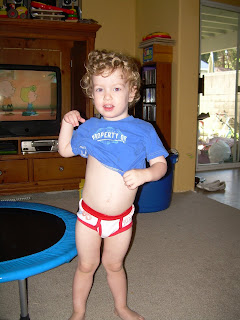 On Sunday, exhausted from a long week, and drained from church services, I got down on the floor to change Conor's diaper. The contents made me want to wretch, and I said out loud, "Okay, Conor, this is gross. I don't want to do this any more. It's time for you to be a big boy and go poo-poo in the potty."

He did, after all, just turn 3. And while he's been going potty periodically like a big boy for a year now, the games were over. I decided it was time to get serious.

Originally, it had been my summer goal to get him potty-trained. But summer didn't happen as I had planned, and other things snatched my attention and emotional reserves.

But Monday morning, as I pulled back in the driveway after taking the big kids to school, I thought to myself, "Jenna, just do it. Both feet in. Just think: this can all be over in 3 days! So you'll have three days of accidents and laundry. In 3 days it will be over!"

I marched Conor in and took off his pants. And his diaper. He looked confused.

"It's time, Conor. You are a big boy now, and big boys go pee-pee and poo-poo in the big potty."

I'd never done the naked thing before, but I didn't want to mess around, and training pants seemed, in the past, to give him a false sense of security.

He was praised with hugs and kisses (and a gummy worm) for each successful big boy potty time. He was rewarded with episodes of Sponge Bob, which is, of course, a big boy show.

He didn't have a single accident all morning. But come naptime, not knowing what to do, I diapered him up and sent him to bed. A double whammy, almost immediately. Yuck.

Yesterday, he graduated to big boy underwear. Which he kept dry all day. And during naptime. And, I just discovered, all night long. (I wasn't messing around.) I am so proud of my little big boy.

And as I walked through the kitchen, my heart filled with jubilation that yes, we may finally be out of the diaper stage, (and think of the money I'll save!) the full reality of that statement hit me like a two-by-four right in my mommy heart, and I burst out in tears.

No diapers means no baby. Could it be that that stage is really over? I mean, trying to face the facts, I realize that there may not ever be another baby to diaper. Of my own, anyway. And that feels incredibly sad to me.

Thinking about this, I believe that the real work of mothering doesn't happen in full swing until a mother is required to provide for more than just the physical needs of her children. But at the same time, nothing makes a mother feel more mommy-ish than having a baby. And now, hiding behind the baby stage is coming to a close. We've already put away so many of the relics of babyhood. The diapers were the last to go. And with them, a piece of my heart, which will always crave a baby in the house.
Posted by Jenna at 7:49 AM

Oh! I so know that feeling of ambivalence.

Yay for Conor! And think of the money you'll save by not buying diapers!

But it is a little sad, too. But just think! In what, about 15 years? We'll have grandchildren!

I took a detour through the baby section at Target the other day, and surprised myself with the nostalgia I felt for the days when we were excitedly preparing for the arrival of our daughters.

And I'll admit to feeling a bit sad that we'll likely never do the baby thing again. It was hard, but it was cool.

Leaving the baby phase behind is great, but just a little bit sad, too.

It's a strange mix of emotions we mothers go through, isn't it? Your post title says it all

Oh boo hoo (sarcasm included!) You are STILL a mom! Yeah for Conor....you two are both doing your job because the best thing a mom can do is help her children grow. And then you too will grow :) Sorry, as I near the delivery of another baby I envy your freedom!!!

Yay, Conor!!! Aunt Abby is SUPER proud of you! Give him a big ol hug from me, will ya?

I feel your pain! I'm about ready to start Maddox on potty training because oh my gosh diapers get disgusting the bigger they get! But I almost don't want to because :( my baby! There's just something so sweet about a little guy running around with a diaper on. That cute little butt. Ohhhhh!

How about this..next time there's a baby in my house, I'll let you come out and snuggle..and change it's diapers. You're welcome. :)

I'm sorry you're feeling sad about it Jenna. He's still your baby. He'll alaways be your baby. Just a little bit bigger. And come on. Who really misses changing diapers?

started to potty train my youngest, too. same mixed feelings. Such a sweetness that can never be had elsewhere. Glad to be nearly done with diapers, but at the same time, hoping she will stay that same sweetness forever!

My sister in law is done having kids and has peace with it. So much, in fact, that she has no more longing for a baby in the house. I envy her. I am pretty certain that I will be like you. Once my babies grow up I will mourn for a long, long time.

First: YAY, CONOR!!! I remember the first time I dared to take you out of the house in training pants. It was to the store and I was scared to death, but you stepped up to the social obligation of being out in public. Huge relief!

But I *do* miss having that flock of little children around. Even though I know I no longer have the stamina or the patience, and even though I really enjoy the freedom of being past the kid-rearing stage -- still: bedtime stories, Sesame Street, Fisher-Price 'peoples,' silly songs, all those cute little faces ... sniff!

And if you have 15 years before Lyndsay makes you a grandmother, I'll be oh-so-very-surprised!