All Together Again: Day 8 Today was very low-key.  Cleaning, laundry, packing up.  Dylan ran some errands with Lyndsay and they came home with Slurpees for everyone.  Dylan and Adam played some ping-pong.  And I decided we'd eat a very early dinner so that I could make one of Dylan's favorite meals and send him off with a full tummy.  His flight was at 6:35pm and he wouldn't get to Phoenix until after 8pm, so there wasn't really a good mealtime there and I didn't want him to get off the plane famished.  So I made teriyaki salmon and rice for dinner at 4pm and an apple crisp for dessert, which we were all able to eat together.  One more time, all of us around the table.

Then Dylan said his goodbyes, and we packed up the van.  I drove him over to Brad's house so he could say goodbye, and then we headed to the airport.  I got a pass to go back with him, and we sat together for about an hour and a half before it was time for boarding.  Sometimes we talked; sometimes we sat in silence.  I gave him a Mom Pep Talk about the new school year (which starts on Monday for him) at a new school, working hard, staying focused and out of trouble, making good friends.

I asked him what his favorite things about his visit were.  Six Flags was number one.  The beach number two.  The Dodgers game number three.

I asked him if he felt my love while he was here.

I told him again how very much I love him and how I'd been looking forward for so many months for this time with him.  When it was time to board, and I stood in line next to him with tears filling my eyes, he grabbed me in a hug and said it was a good visit.

Man, I love that boy.  And just when I was getting used to seeing his face around here, he's gone.

But I think he was right.  I think it was a good visit.  And we needed that. 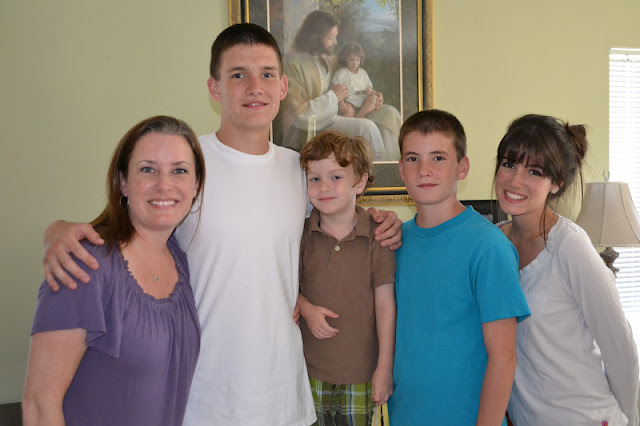 I'm weepy for you. Hugs.