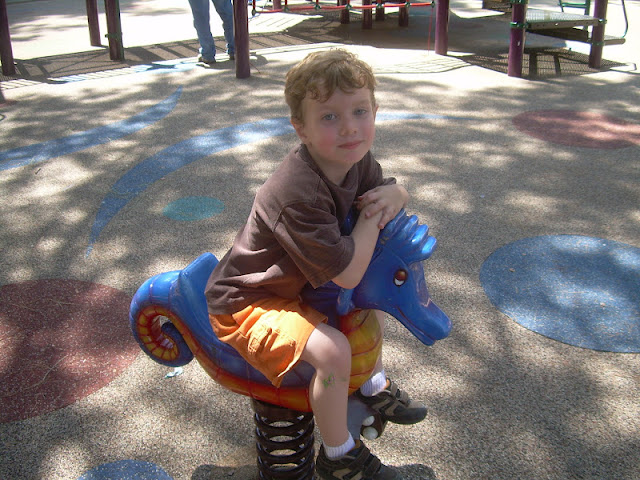 I love this boy of mine.  What a gift he is to me, each and every day.  His little heart is huge, and the depth of his feelings and compassion, combined with the way he sees the world are such a privilege to behold.  He just came this way, and it's really fun to watch him grow.

Conor adores his 1st grade teacher.  She is a member of our ward at church and the mother of one of Lyndsay's best friends, so he was familiar with her before she became his teacher.  Several weeks into the school year, she was out sick for a day.  He was worried about her.  In his prayers that night he prayed, "Please bless Mrs. Pinkston to get better and to not be sick anymore.  Not even a bit."  The next day, more of the same.  Once she was back to health, he kept up the prayers for her: "Please bless Mrs. Pinkston to be so grateful that she is not sick anymore."

But while she was under the weather, he wanted to "make a craft" for her.  He asked me for black and white paper, which I gave him, and he pulled down the scissors and glue and crayons.  Then he proceeded to cut out black and white squares and glue them to another paper, and then draw each of the chess figures, placing them in their positions and folding them up so they stood aright.  He worked for several days, a little at a time.  He was so proud of his homemade chess set when he was finished.  I almost hated to see it go, but he'd labored over it as a gift for his beloved Mrs. Pinkston, so the morning after it was finished, he toted it off to school. 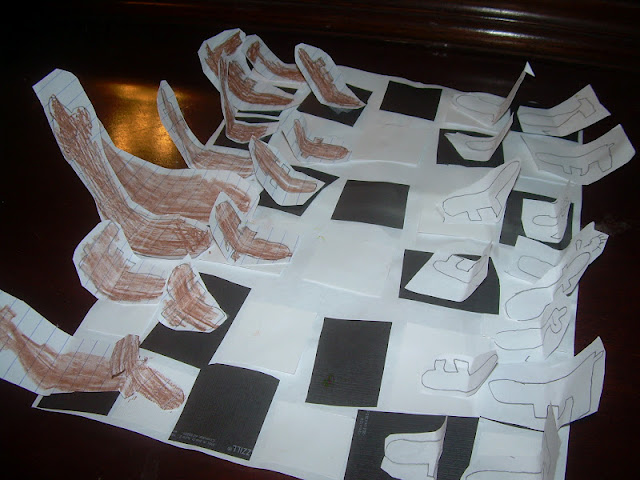 Conor loves adults, if you haven't noticed.  Other children are fine, though he prefers them just a bit older than himself, but he makes interesting connections with adults in his life.  Take the Iranian bus driver.  Conor doesn't even take a bus to school, but every day the busses line the streets in front of his school and the bus drivers wait outside their busses for their children to board.  Conor and I would walk by them each day on the way home from school, and for some reason, he really took an interest in this one.  They didn't exchange too many words, but once that bell rang, Conor would run down the street to see him and give him a high-five as he passed.  The driver would say in his thick accent, "Have a good day, Mister."  And Conor would say, "You too! Have a great day!  See you tomorrow!"  And that was it.  Every. Single. Day.  And the bus driver wouldn't take his busload until he had seen Conor.  He stopped me one time on my way to the school to ask if it would be okay if he gave Conor a small gift.  I said sure, so he brought Conor a small toy school bus.  And he gave him several other toy school busses of various sizes over the months, which Conor cherishes.  Towards the end of the school year, the driver asked me when Conor's birthday was and I told him it was the day before the next school year started.  So he brought me a gift to save for the summer and give him when it was his birthday.  Conor was so thrilled to receive a gift after a summer of not seeing his friend.  (Another toy vehicle.) 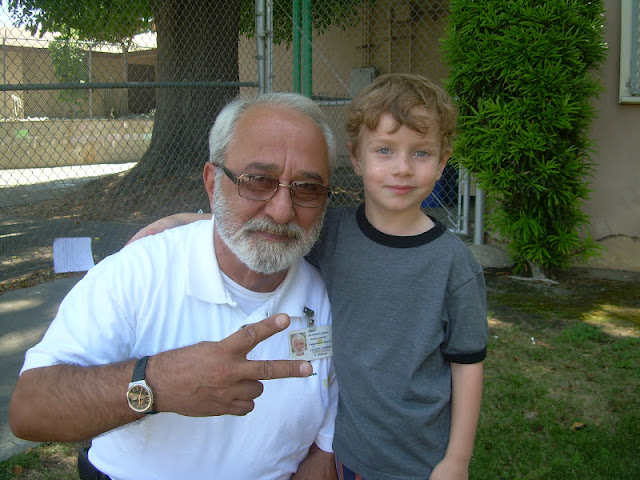 Well, when this school year started, and we headed home that first day, passing by the busses all lined up, Conor's old friend was not among the drivers.  Each day that week we looked for him, but he was gone.  I think his route must have been changed.

Earlier this week, after Conor had been put to bed, I heard him crying.  I went in to see what was wrong.  "I miss the bus driver," he sobbed.  And his little heart broke wide open with his sadness.  I tried to comfort him, but I felt so helpless.  I didn't even know the man's name (Ashat?  Ashrat?  Something like that, but still, that's only a first name.)  Conor wanted to write to him, to find him somehow, and I didn't know how to do that.  I sat with him for several minutes, and then, in such an astute way, he asked, "Can I get up and draw a picture of a bus?"  He knew that's what he needed to do to process his grief.  He does that sometimes.  When he was missing Dylan, he would ask to draw pictures for him.  When he was missing Lyndsay, sometimes even late at night when his thoughts become more clear to him in the silence of his darkened room, he would ask to get up and draw pictures.  I understood that that was what he needed to, much in the same way that when I am processing emotion I am overwhelmed with a feeling to turn on the light and write.

I didn't care that it was past his bedtime.  I loved that he loved this Iranian bus driver for LAUSD, and I loved that he was so in tune with his feelings that he could channel his grief into action that would be healing for him.  So, I let him out of bed and he came downstairs and got out his journal. 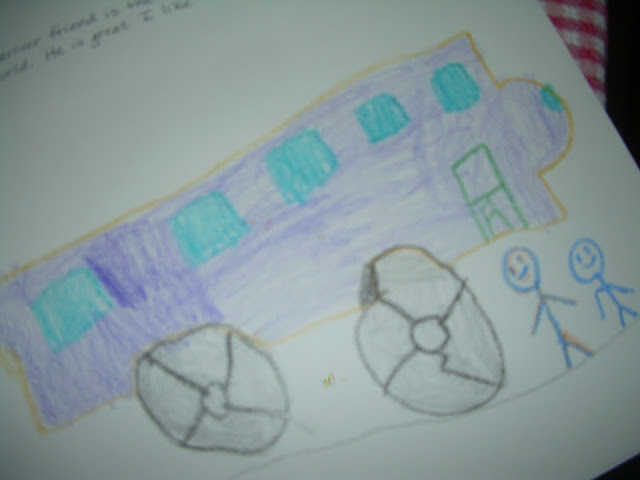 (I'm not sure why the bus is purple and blue, except that maybe purple and blue are "sad" colors for Conor.)  He dictated just a few sentences to me, which I wrote on the top of the page, but when I prompted him to see if he wanted to talk more about his feelings of missing the bus driver, he said, "No, I'm done."  And off he went to bed.

Just part of the magic of raising a child.
Posted by Jenna at 7:36 PM

That boy is such a darling. I love him so much. Is it too early to plan for him to take Anne to prom?

Awww he is so adorable! I saw your status and had to come look at the post. Conor always has great stories <3 I miss him so much! Love you.
xoxo
Lyndsay

What a sweet story... and such a sweet boy. Have you contacted the school district transportation office to try to locate the bus driver? My guess is he is missing Conor while Conor is missing him. Maybe a first pen pal? You never know...