A Birthday Feast For Adam 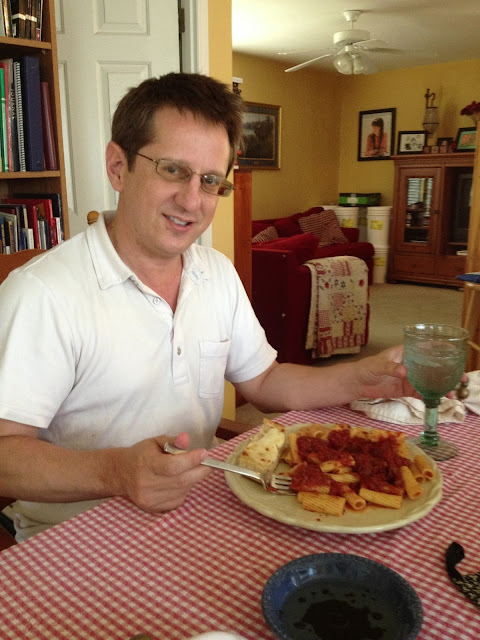 I know this post is going to raise questions. Don't ask me, because I don't altogether know the answers. Yes, we are still separated. Maybe I'll say more another time. But on Sunday morning, I woke up filled with love for Adam. It was the day before his birthday, but Sundays are easier days for a family dinner than are Mondays. And for some reason, I was overcome with the desire to cook for him and make him happy. He loves my pasta, and I had just processed the tomatoes in my garden. It was 8am, with church at 10am, and I thought, "Do I have time to make loaves of French bread?"

I don't always think that way on busy Sunday mornings. As it was, I had to write game show questions for Primary Singing Time. I did that quickly and then rushed downstairs and started making bread. I hoped I had just enough time. Then I started dicing onions and garlic and browning meat to get the sauce simmering.

I texted Adam and asked him if he wanted to come for a family dinner to celebrate his birthday after church. Yes, he did. Very much, thank you. 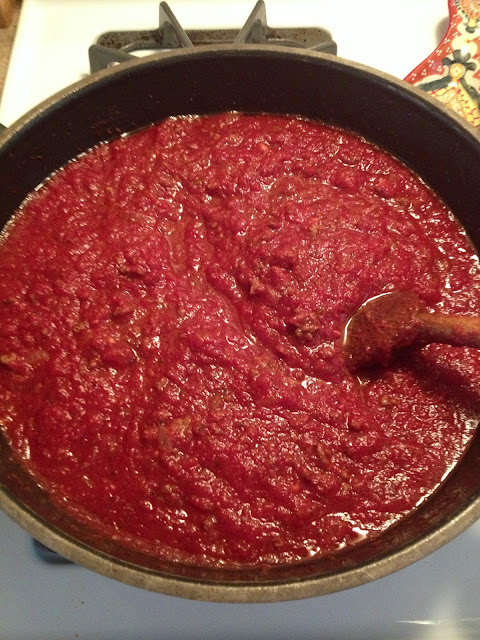 Then I realized that the children would probably be hungry, so in between the bread kneadings, I made some spelt waffles. At that point, I kinda gathered that I might be a bit nuts, and maybe had bitten off more than I could chew. Thankfully, people were smart enough not to step foot in the kitchen or they might have been trampled.

Waffles done, the loaves were shaped to rise, and I ran upstairs to take a shower. After my shower, I ran back down, put the bread in the oven, and ran back upstairs to do my hair and makeup. I had pushed it to the absolute limit, but it looked like things would work! I was feeling so charged up and happy.

I came down to throw some singing materials in my church bag and that's when I saw the piece of paper saying that Conor had a talk to give in Primary. Of course he did! I quickly wrote a talk, took the bread out of the oven (probably another 5 minutes would have been nice to brown it up a bit more, but I didn't have it to spare), left the sauce on a low simmer, and threw my shoes on. Out we went. I got down to Primary just in time. 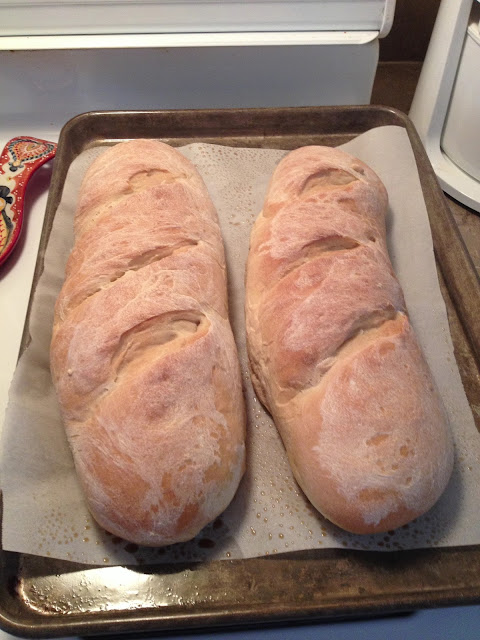 At Church, I was feeling so happy, I invited Lyndsay's boyfriend to come to dinner also. (That's happy.) I was happy to see Adam, and had a wonderful time at Church. Afterwards, I went home and got to work putting the rest of things together. Adam and Sean came a bit later. Lyndsay and Braulio set the table, Adam played with the boys, and helped in the kitchen. I made one of the loaves into Cheesy Garlic Bread (Holy YUM.), and cut up another one for dipping in oil and vinegar, or spreading with butter. I made a pan of brownies and a cherry pie. Boiled the noodles (Adam opted for rigatoni over spaghetti this time), and we all sat down to eat. 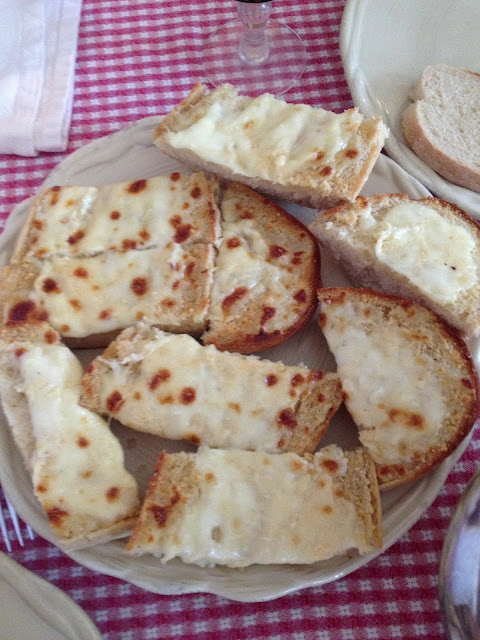 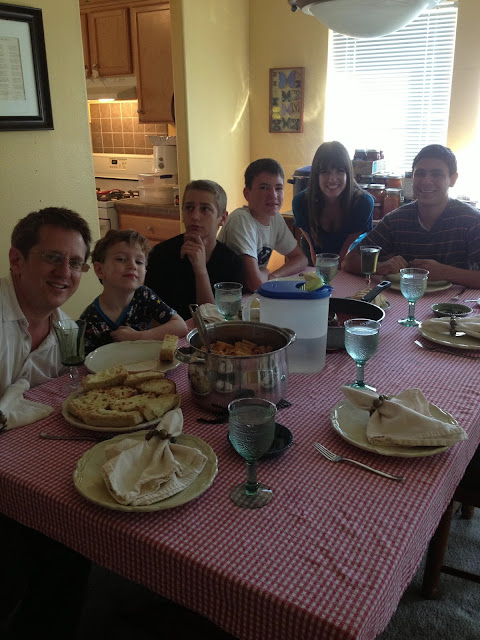 Caitlin was at the beach and not able to be with us, and of course we're missing Dylan. Always. But dinner was delicious, and everyone had a great time. We went around the table and told Adam what we love about him. He's funny. He's sincere. He's heartfelt. He's always ready to have a good time. 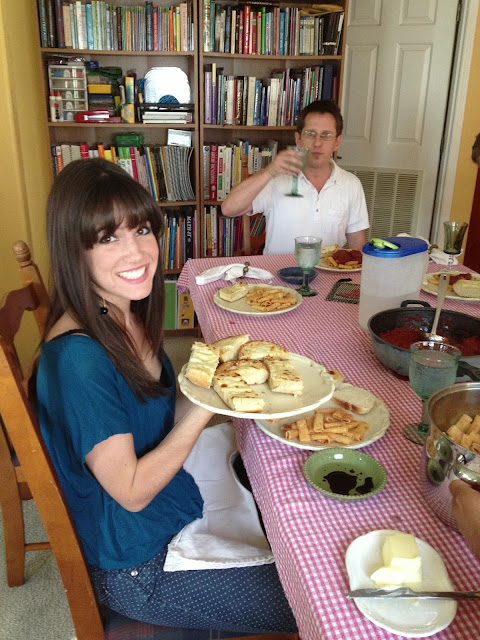 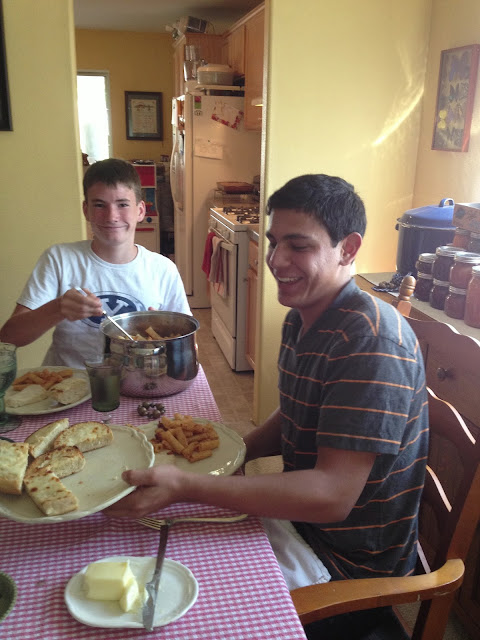 After dinner, the kids played video games, and Adam and I fell asleep on the couches. A Sunday afternoon and a big pasta dinner can bring out the nap time, let me tell you! The kids ate an entire pan of brownies in the meantime.

I didn't have the time to bake a cake, but I did have some cherries in the freezer, so I made a cherry pie instead. (It wasn't the prettiest, but it was tasty!) We stuck a single candle in it, representing the 1 after the 40, and called it a Happy Birthday. 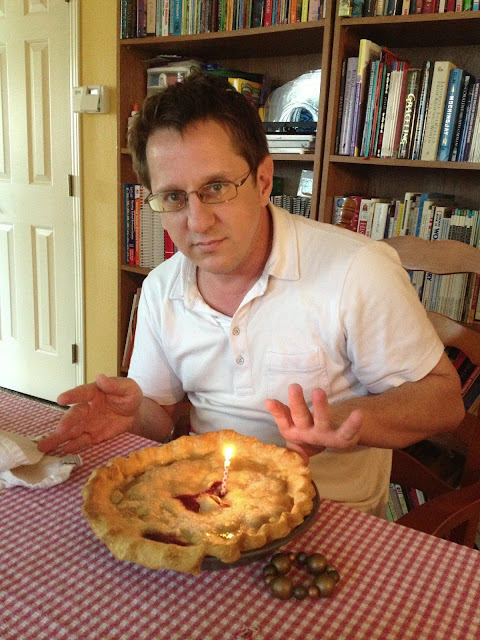 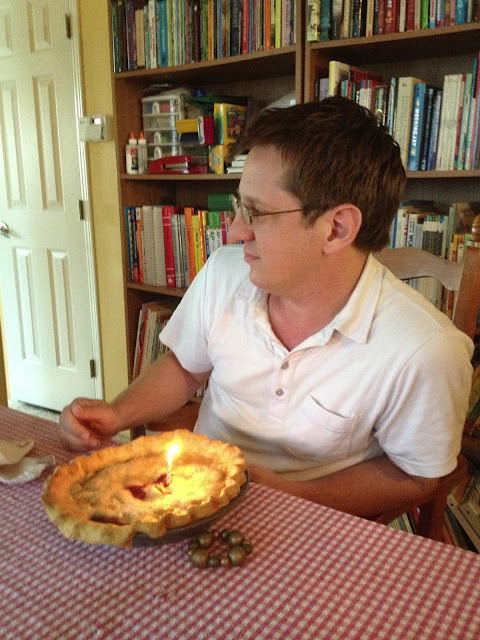 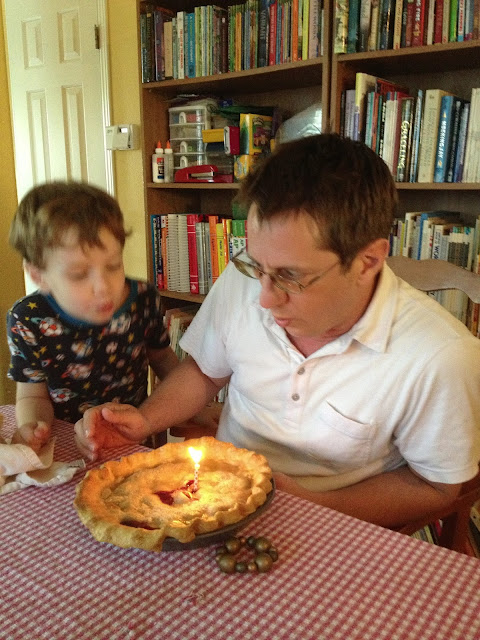 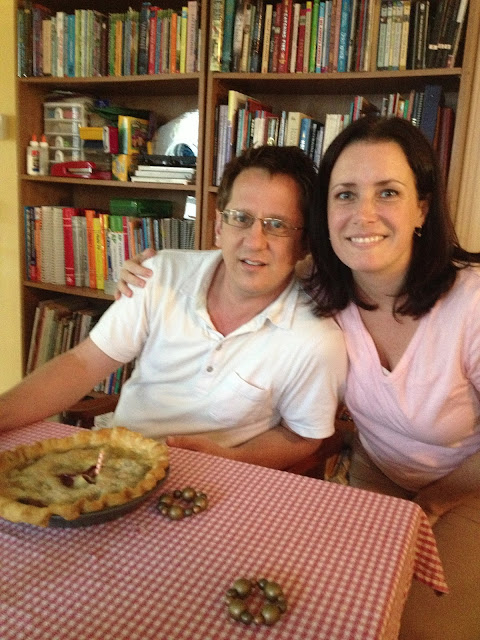 Adam needed to feel loved. Everyone needs to be celebrated on his birthday! And we had a great time being together, with all the kids. Adam and I had a chance to talk, which we've done a lot of lately. It was a lovely way to spend a Sunday afternoon and evening.

Such a sweet post!
I am totally making that garlic bread one day :)

life is sure complicated. I get it though.
You are so thoughtful