The Garden So Far 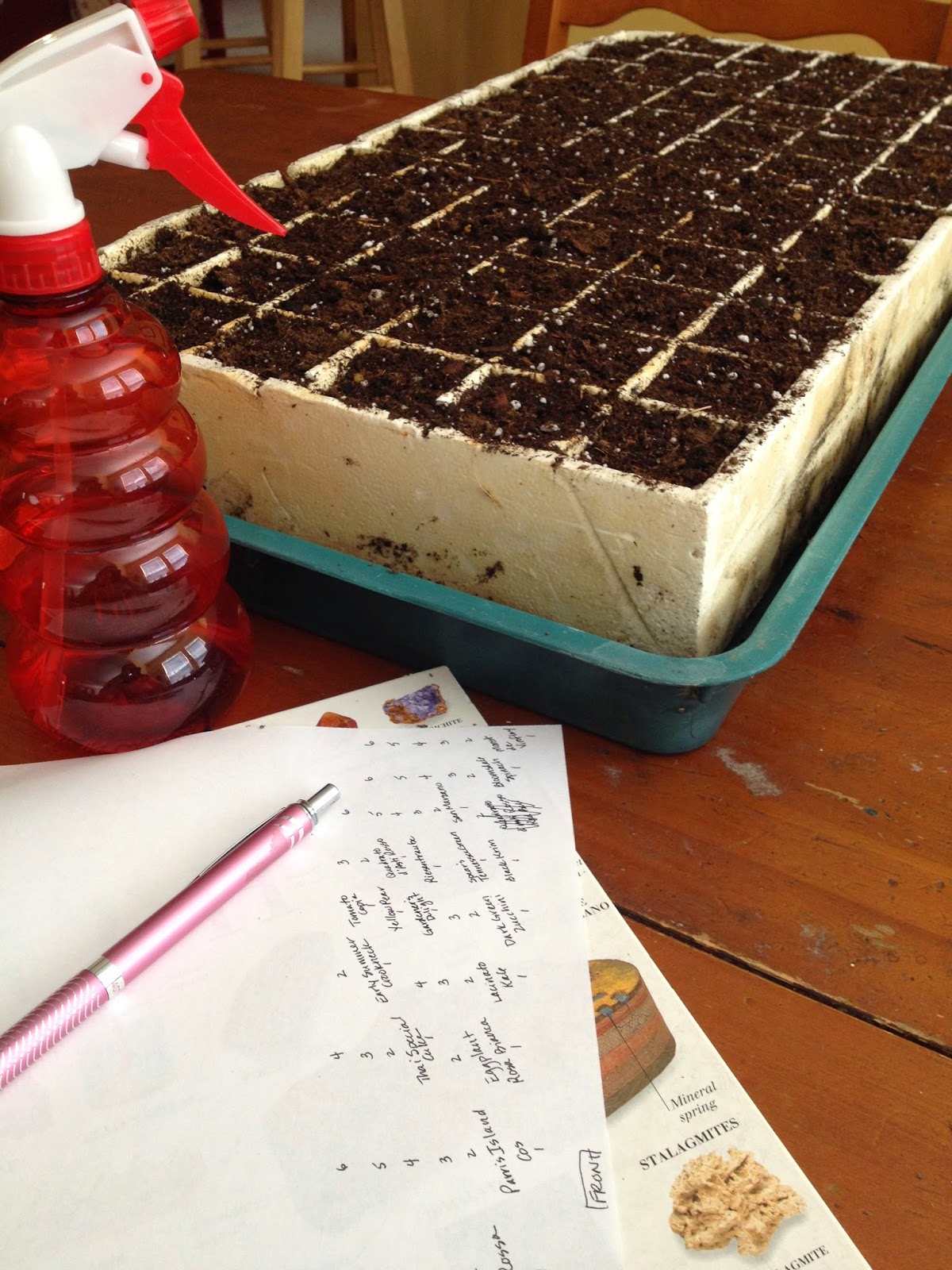 Oh, man, I really debated whether or not I was "up" for a garden this year. My life feels so different than it ever has since I became a working mother. I tried to give myself permission to just let it go this once, but the Spirit worked upon me, ever so gently, nudging me to the seeds and soil.

"The prophet said to plant a garden. . ." The words to the Primary song entered my mind. I thought about my efforts to be self-reliant and prepared and frugal, and well, it just feels wrong to work toward those goals without using the seeds I already own to grow some of my family's food. So, even though I was months later than usual, I decided to just do it already, and trust that my efforts would be blessed.

On March 17th I planted my seeds. Talk about a green way to celebrate St. Patrick's Day! And new this year, I am using grow lights. I have wanted to do this for a few years because I always end up with "leggy" seedlings. 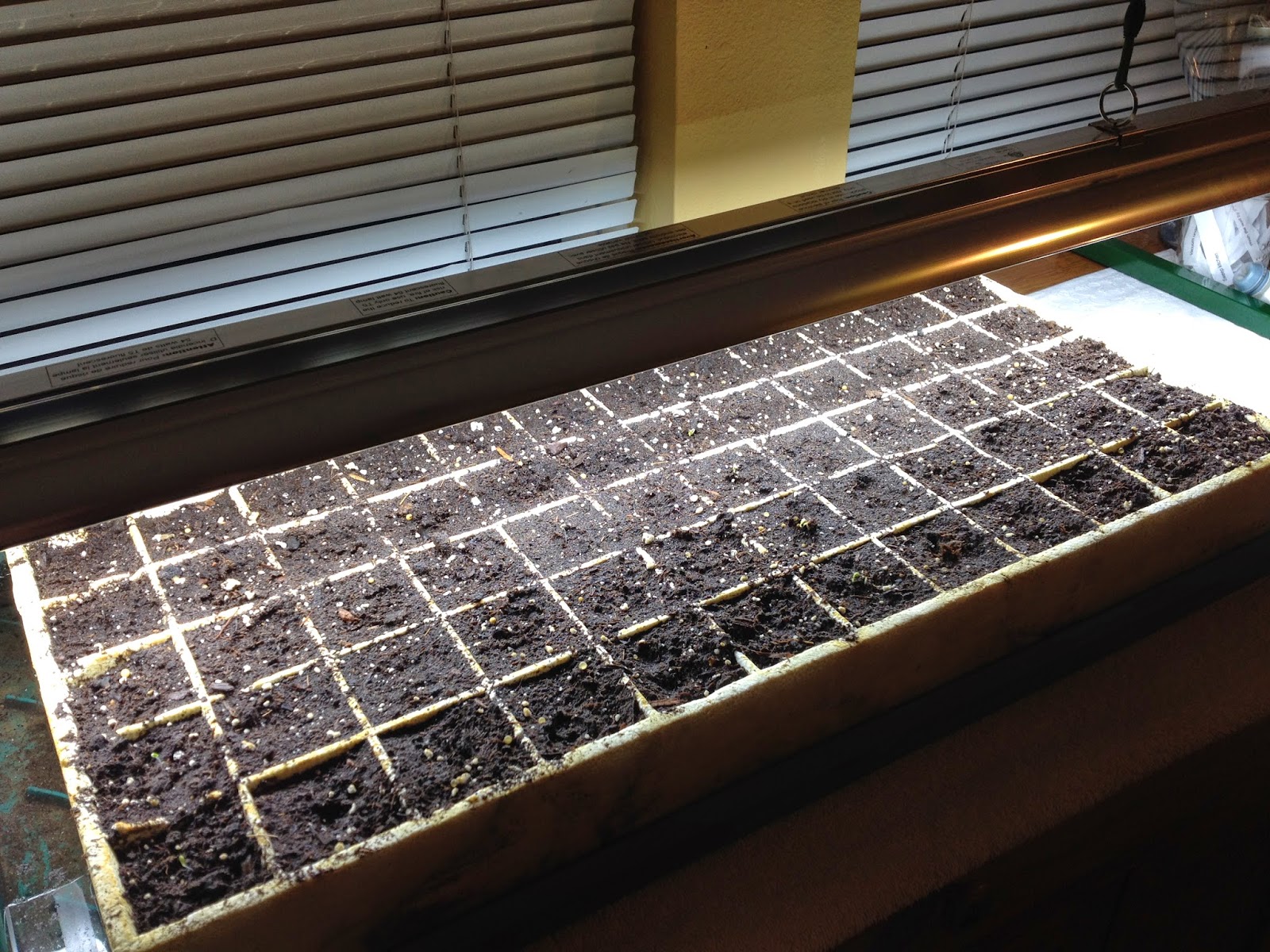 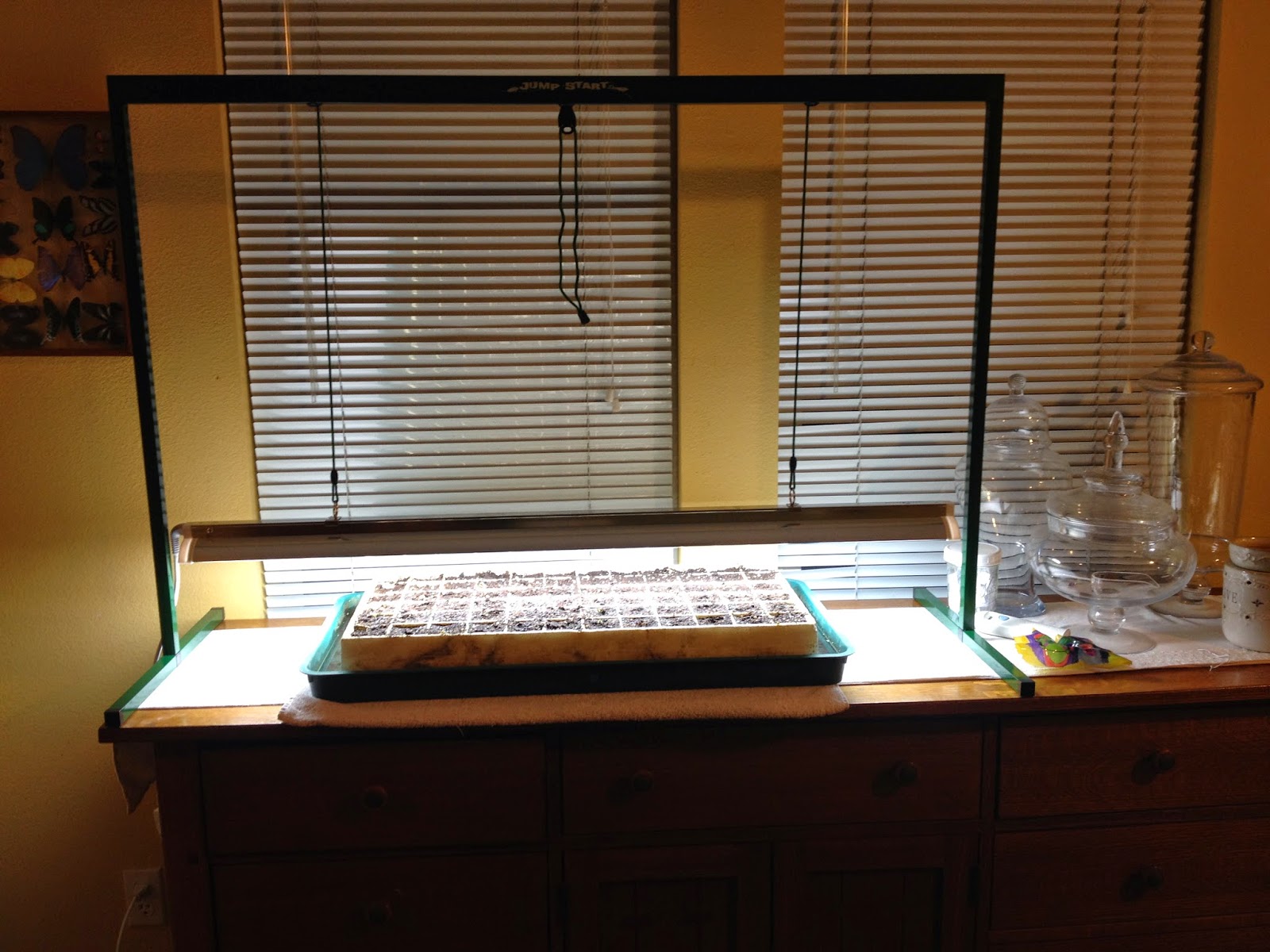 On March 20th, the first seedlings appeared! The Lacinato kale! Interesting, since that is usually a very slow germinator for me. 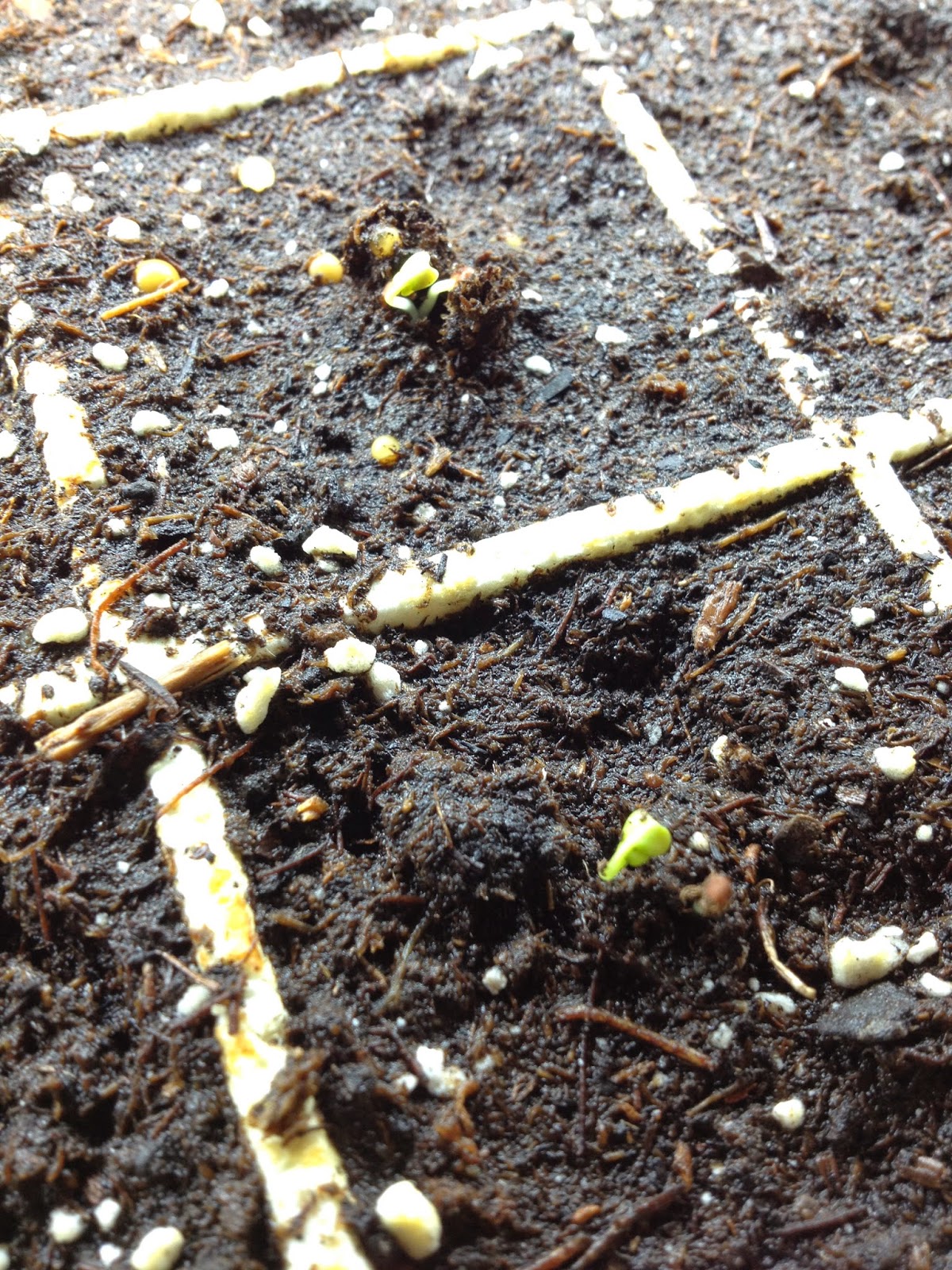 One week after planting the seeds, nearly everything was up. The light is adjustable, so I kept it just about two inches from the top of the plants and raised it as they grew. And they grew fast! 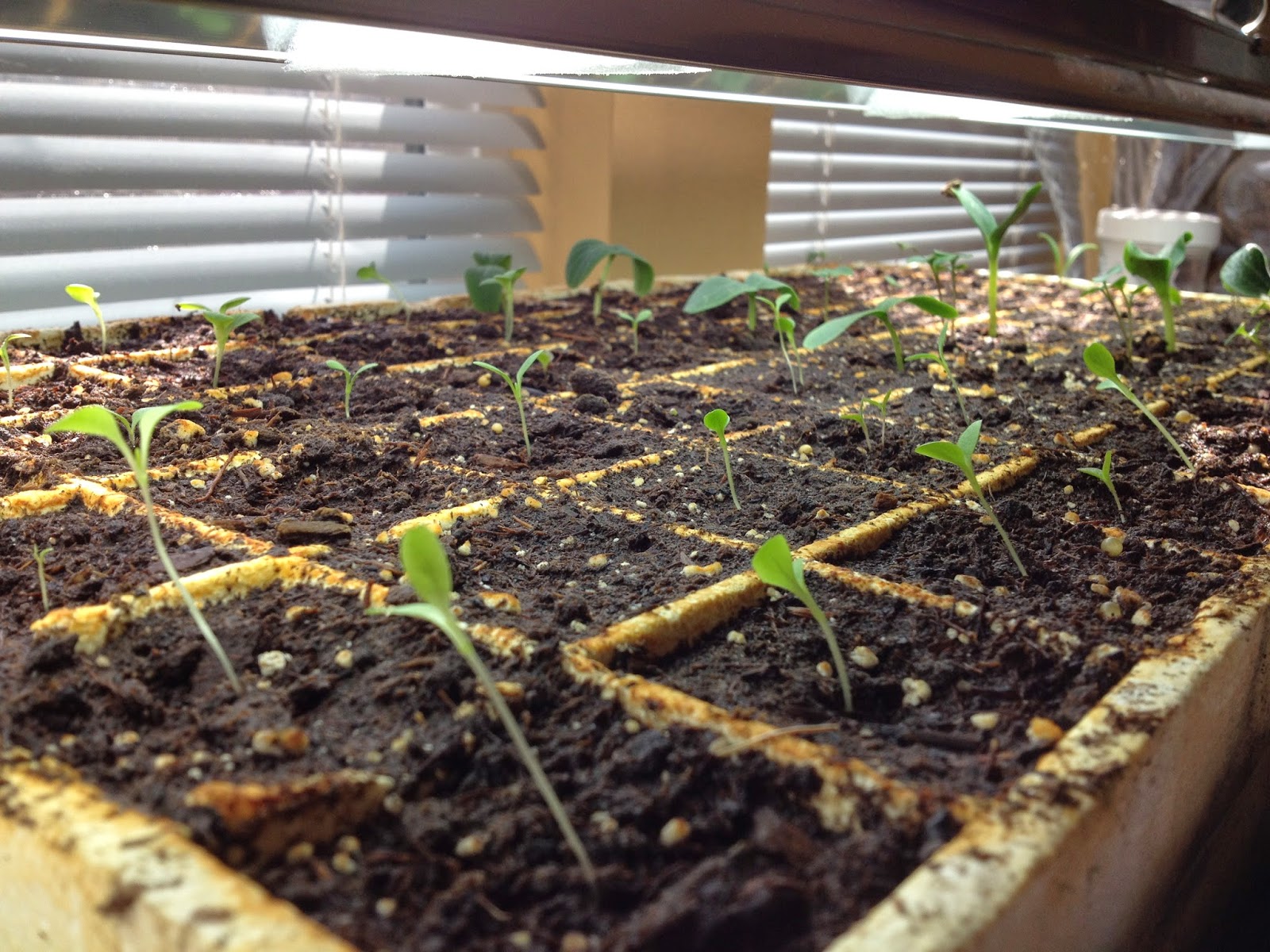 This is a week later, two weeks after planting the seeds! These are the zucchini and squash plants, lettuces to the left. 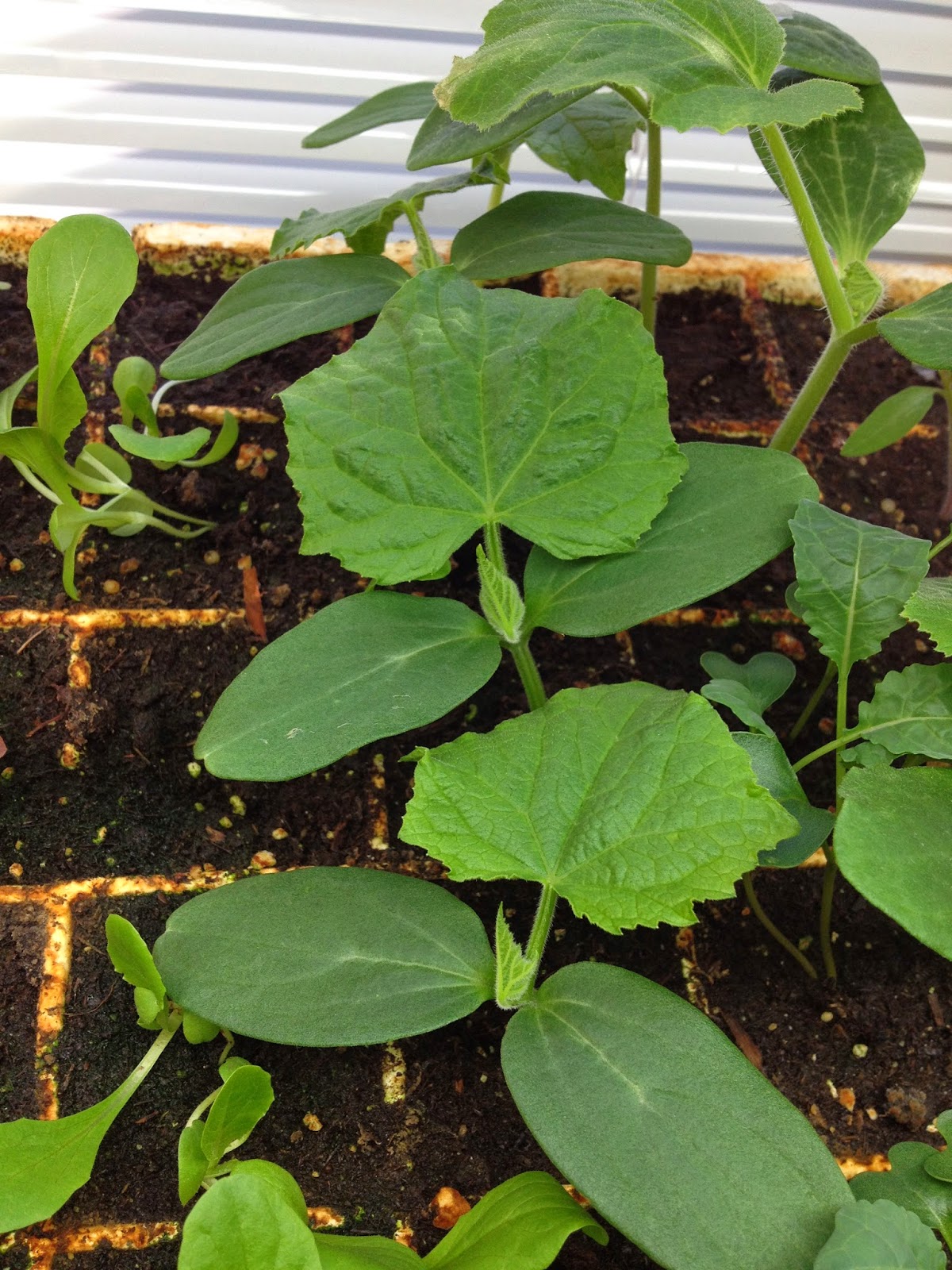 Here are some tomato plants, bell peppers coming up to the left, spinach on the right. 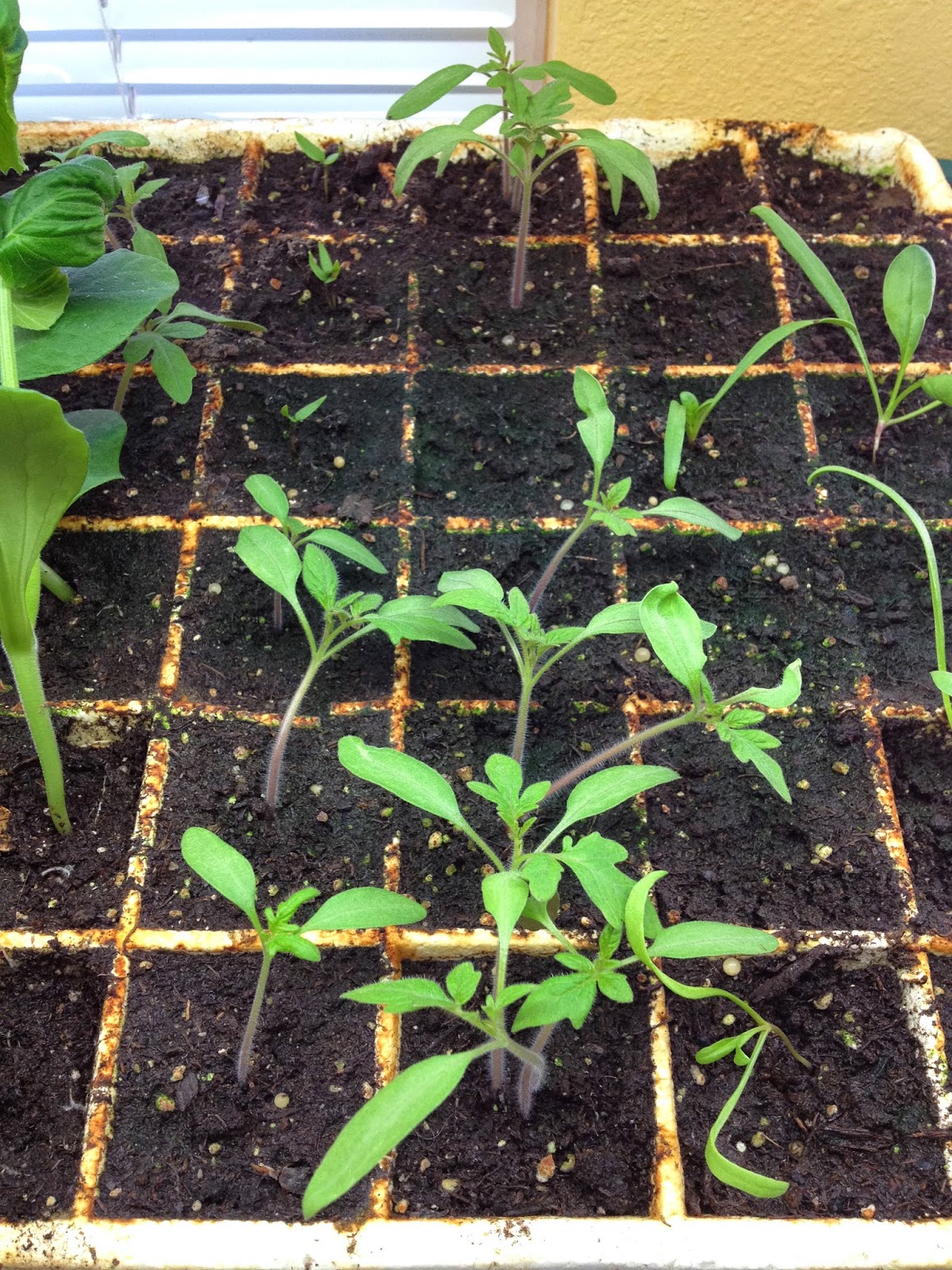 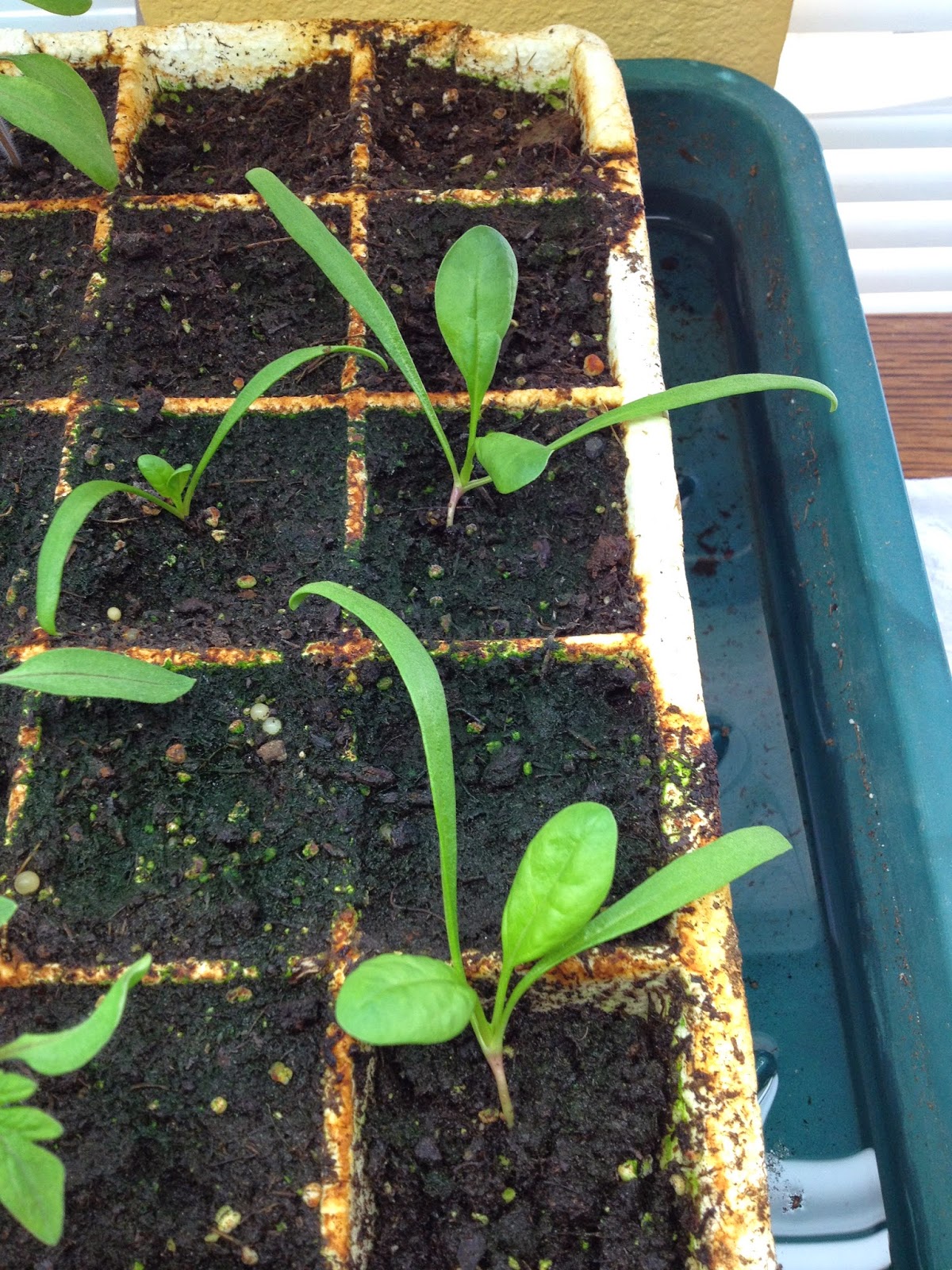 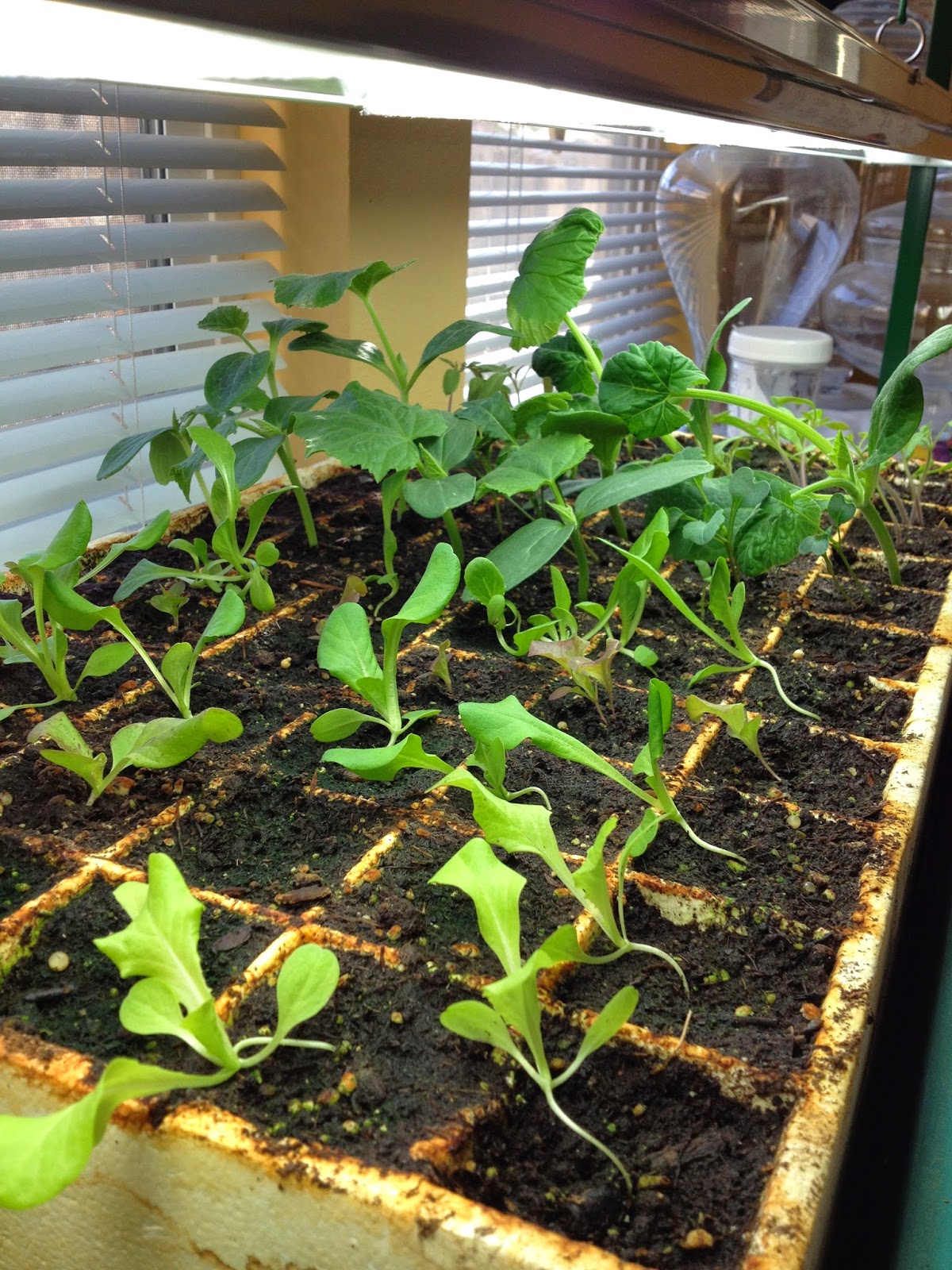 Amazing! When the plants were three weeks old, I started taking them outside for a few hours to harden them off. The first day I set them outside and went to sleep for a bit only to wake up and find all my Black Seeded Simpson Lettuce burned to a crisp (that's the lightest lettuce toward the very bottom of this picture.) It happened to be a record hot day. Oh well. I had plenty of other lettuces growing.

After a week of hardening off, and the plants were outside all day and night, I transplanted them into the garden.

I used the Square Foot Gardening spacing that I love so much, but without the grids this year since I'm growing so many tomatoes that don't really need the grids. I focused on planting what I really, really want, instead of a little of a lot of things. More favorites, less variety.

This translates to 9 San Marzano tomato plants (for the best sauce EVER), several other varieties of heirloom tomatoes, some spinach and kale, zucchini, crookneck squash, eggplant, red bell peppers, pickling cucumbers, and some lettuces. 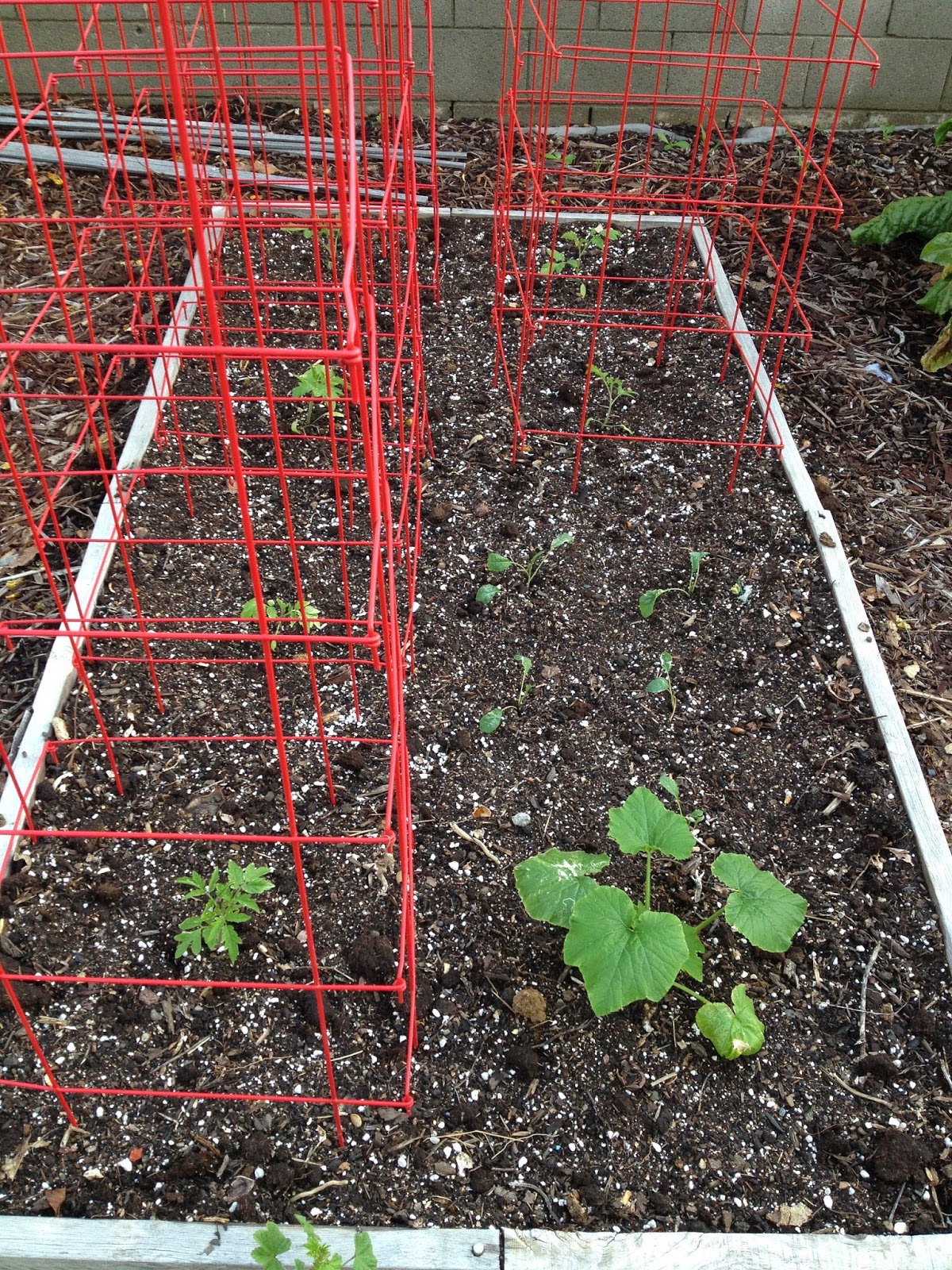 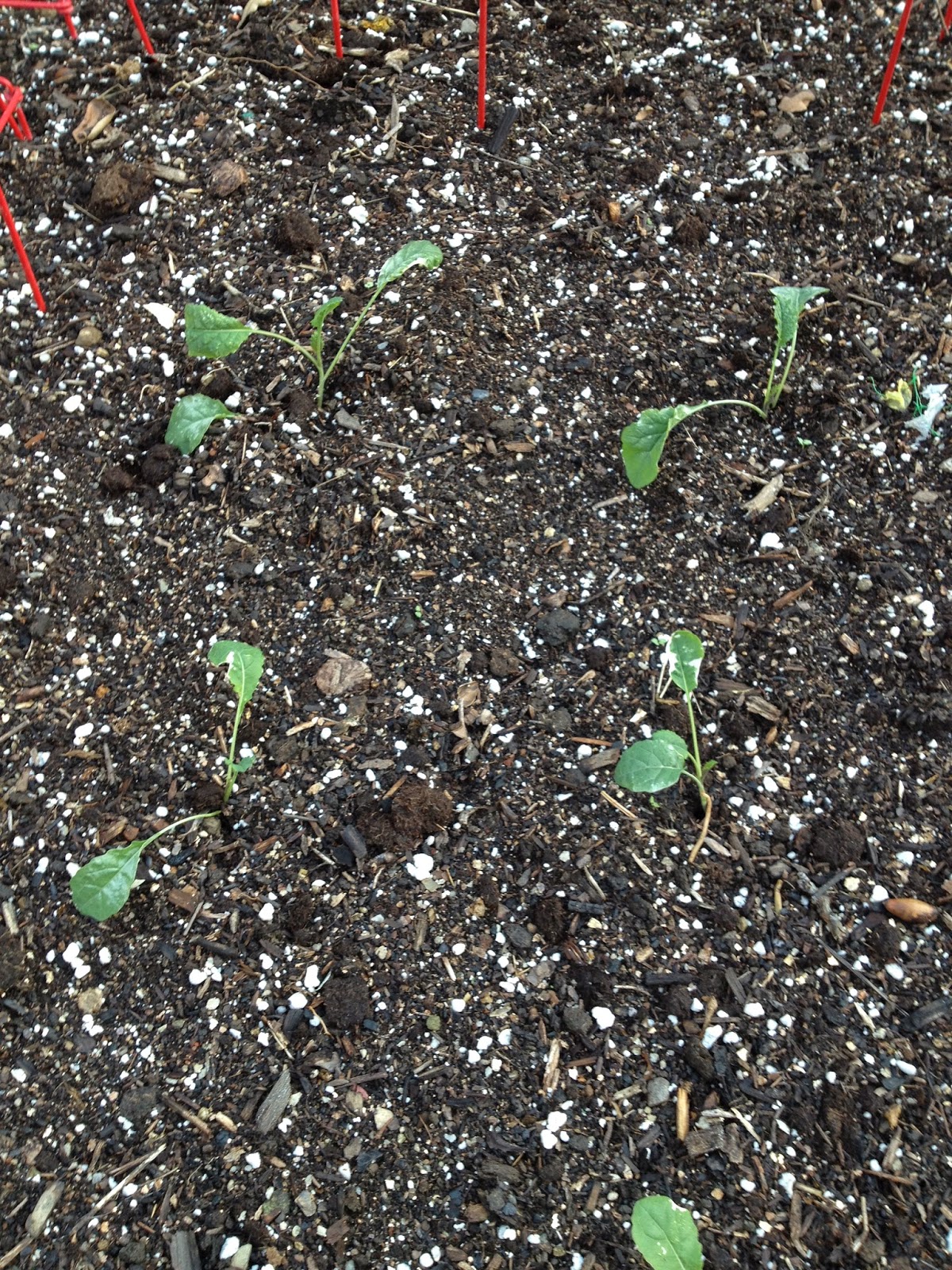 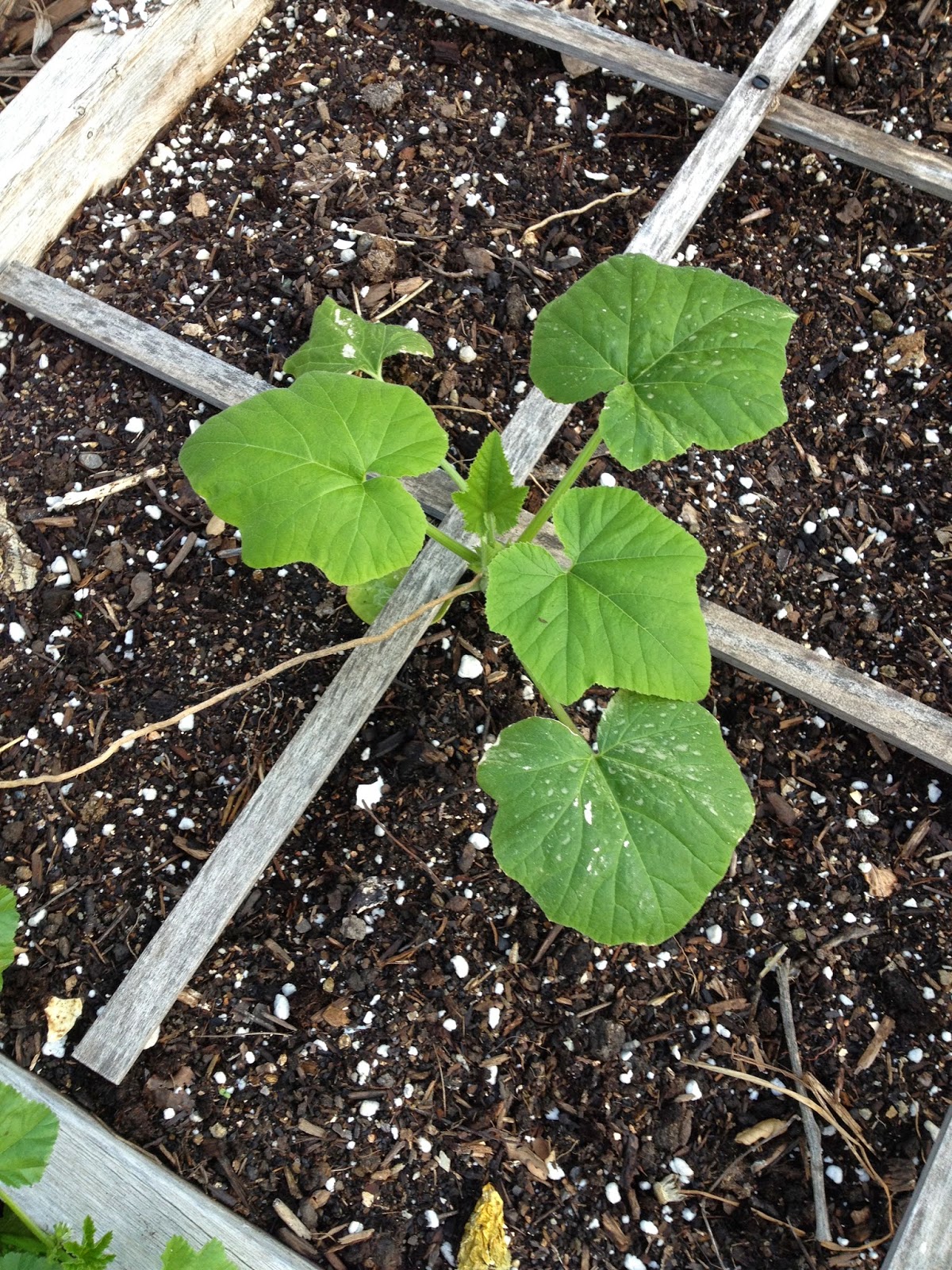 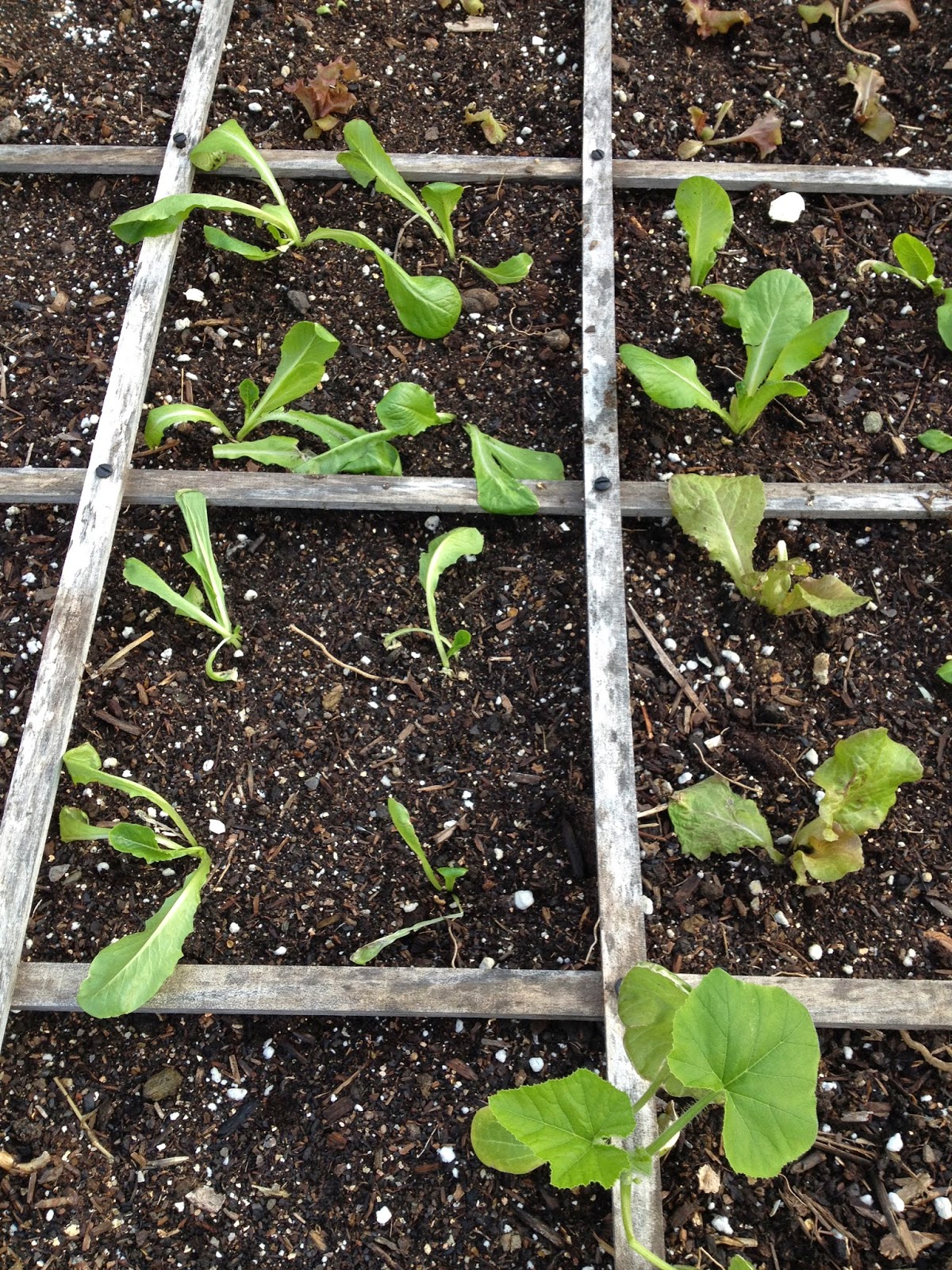 And now two weeks later, here's the way things look in the garden, six weeks after planting the seeds:

(The Fordhook Giant Chard is still growing from last year.) 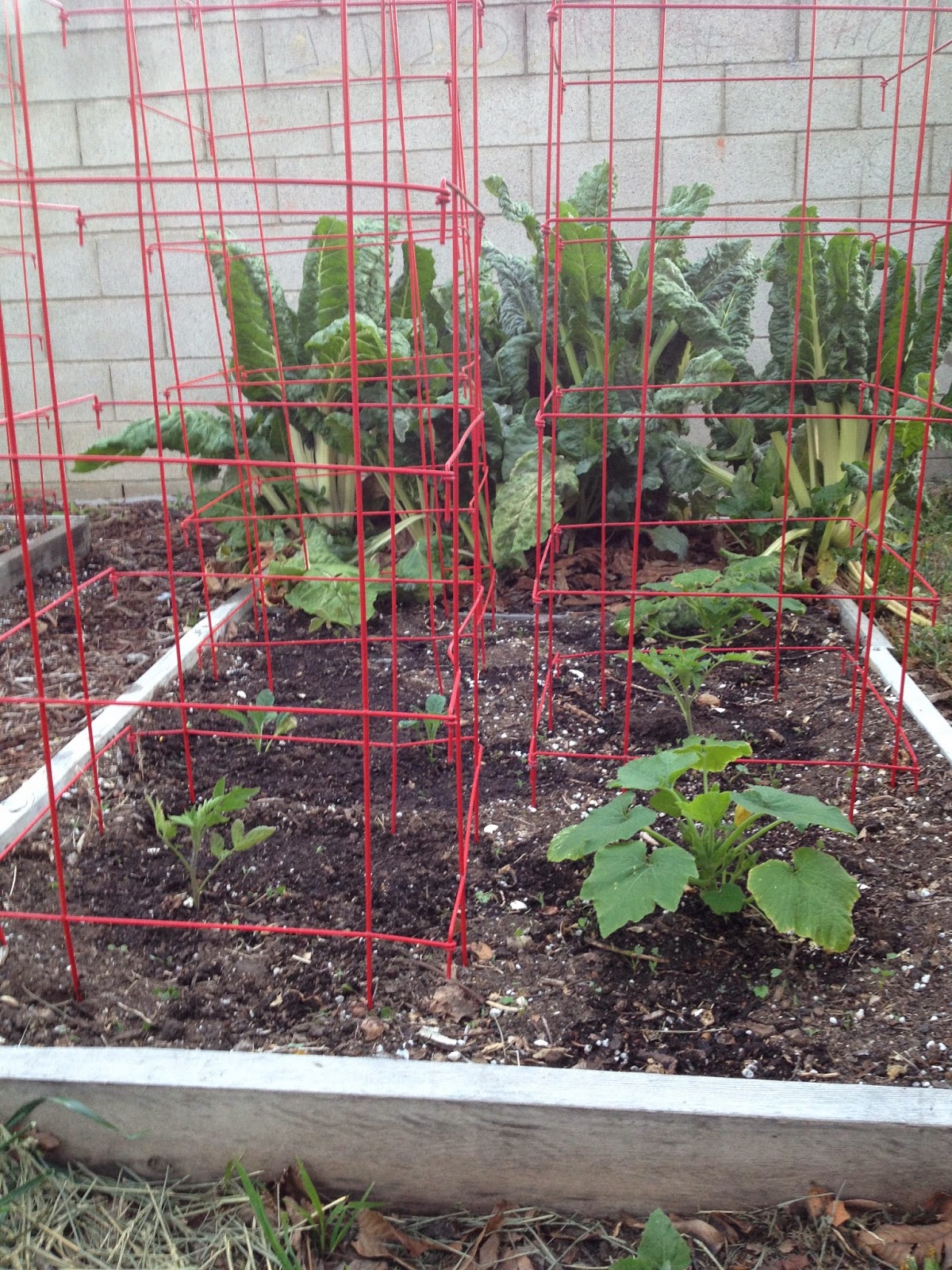 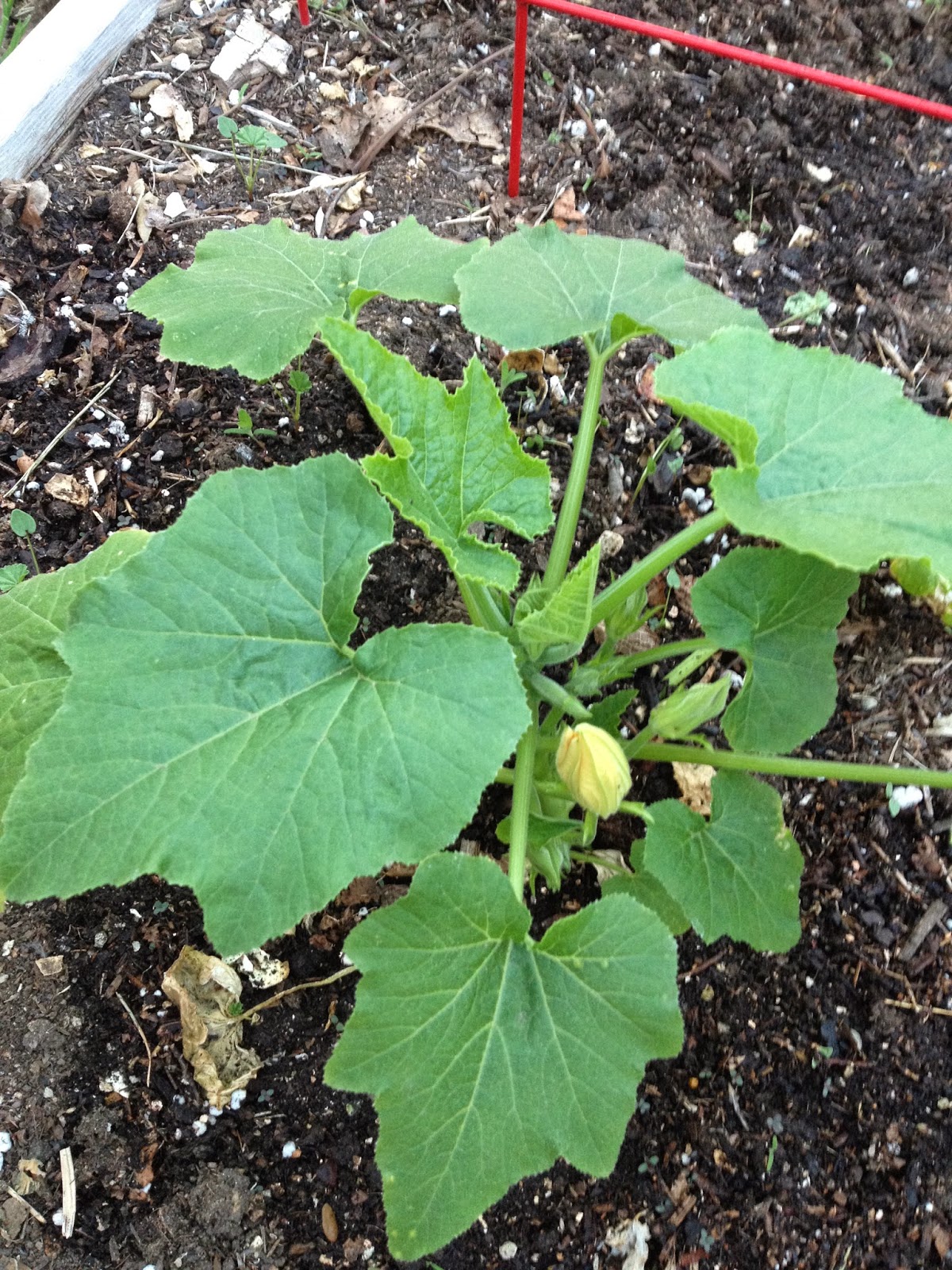 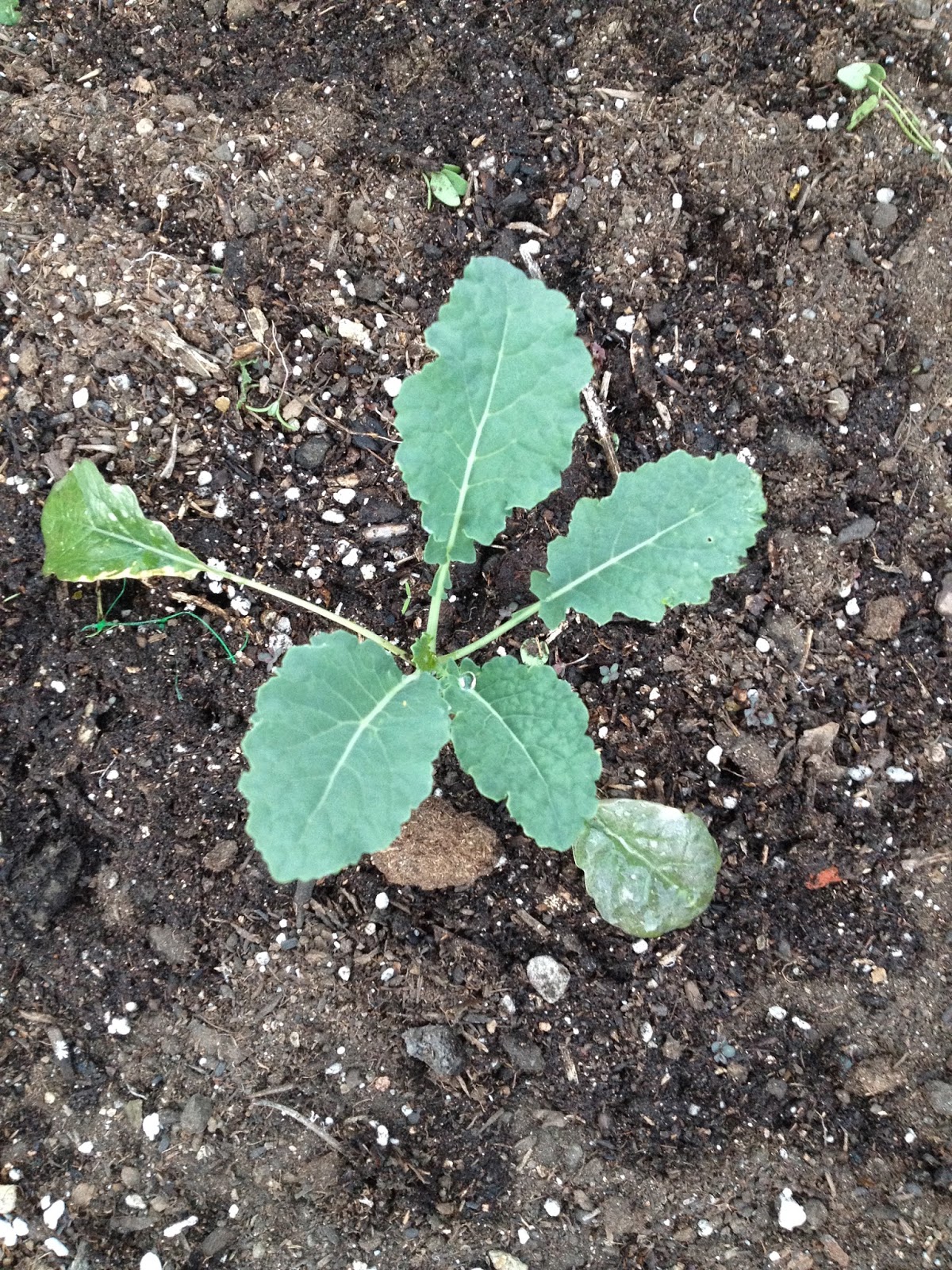 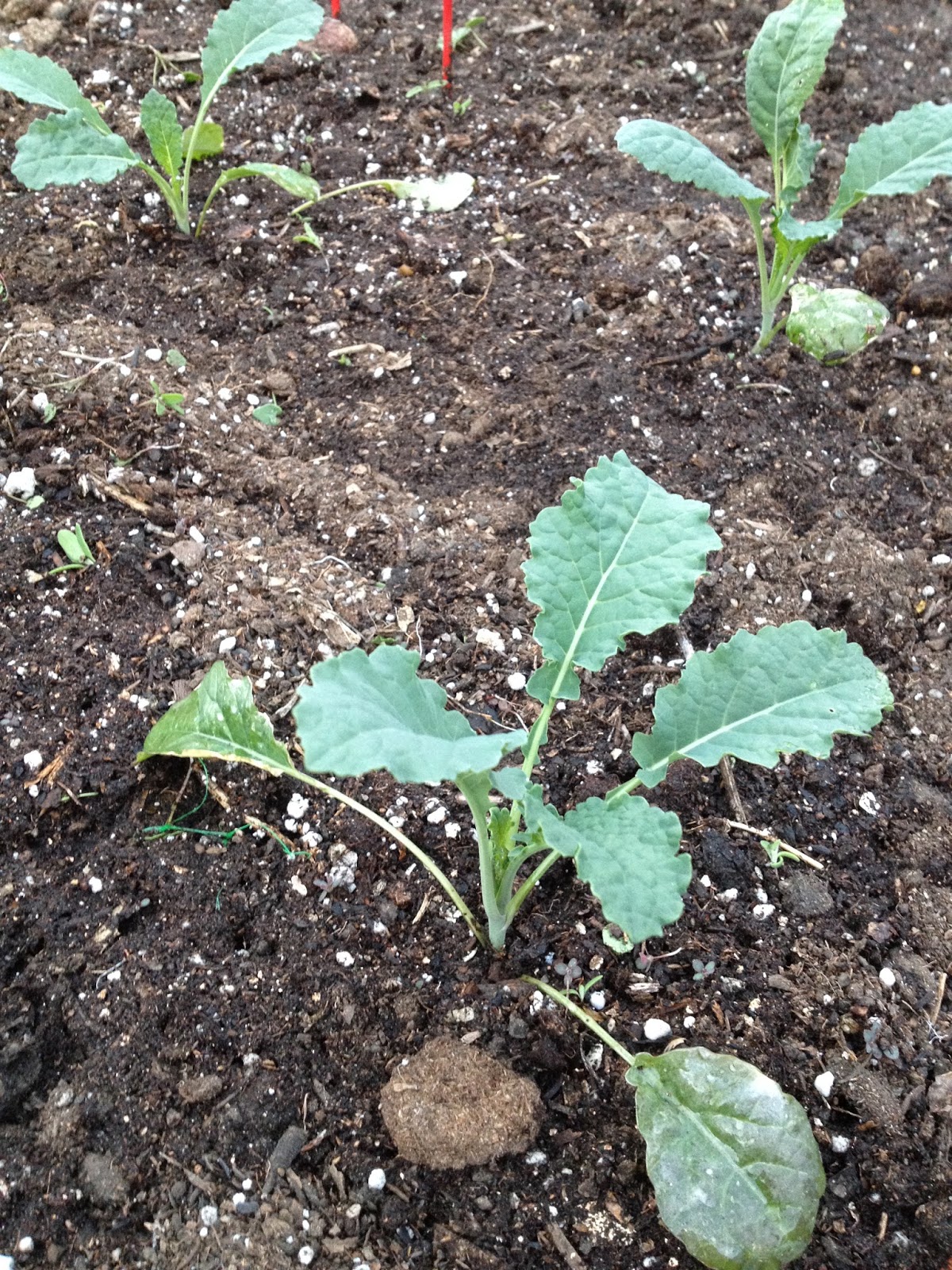 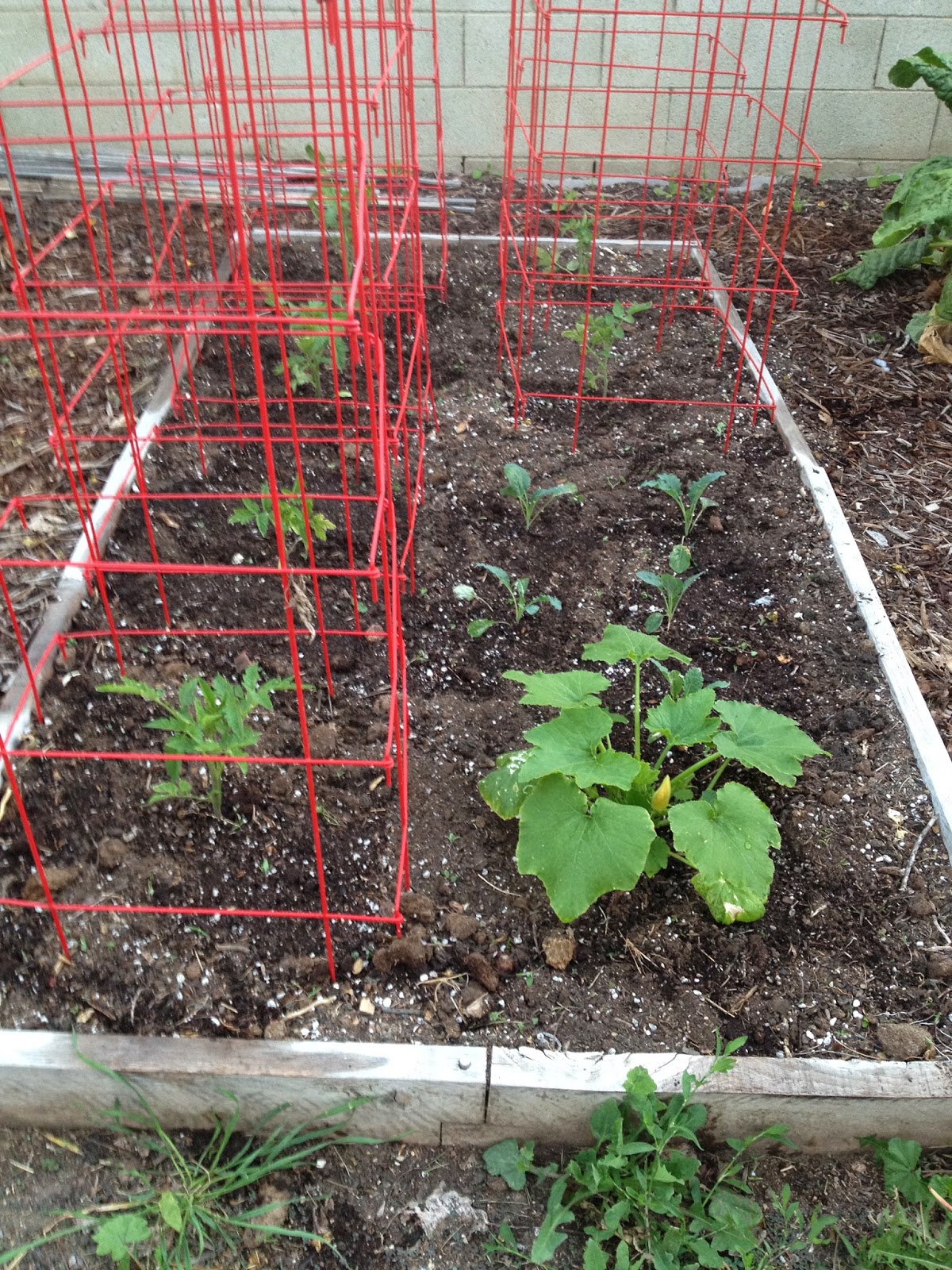 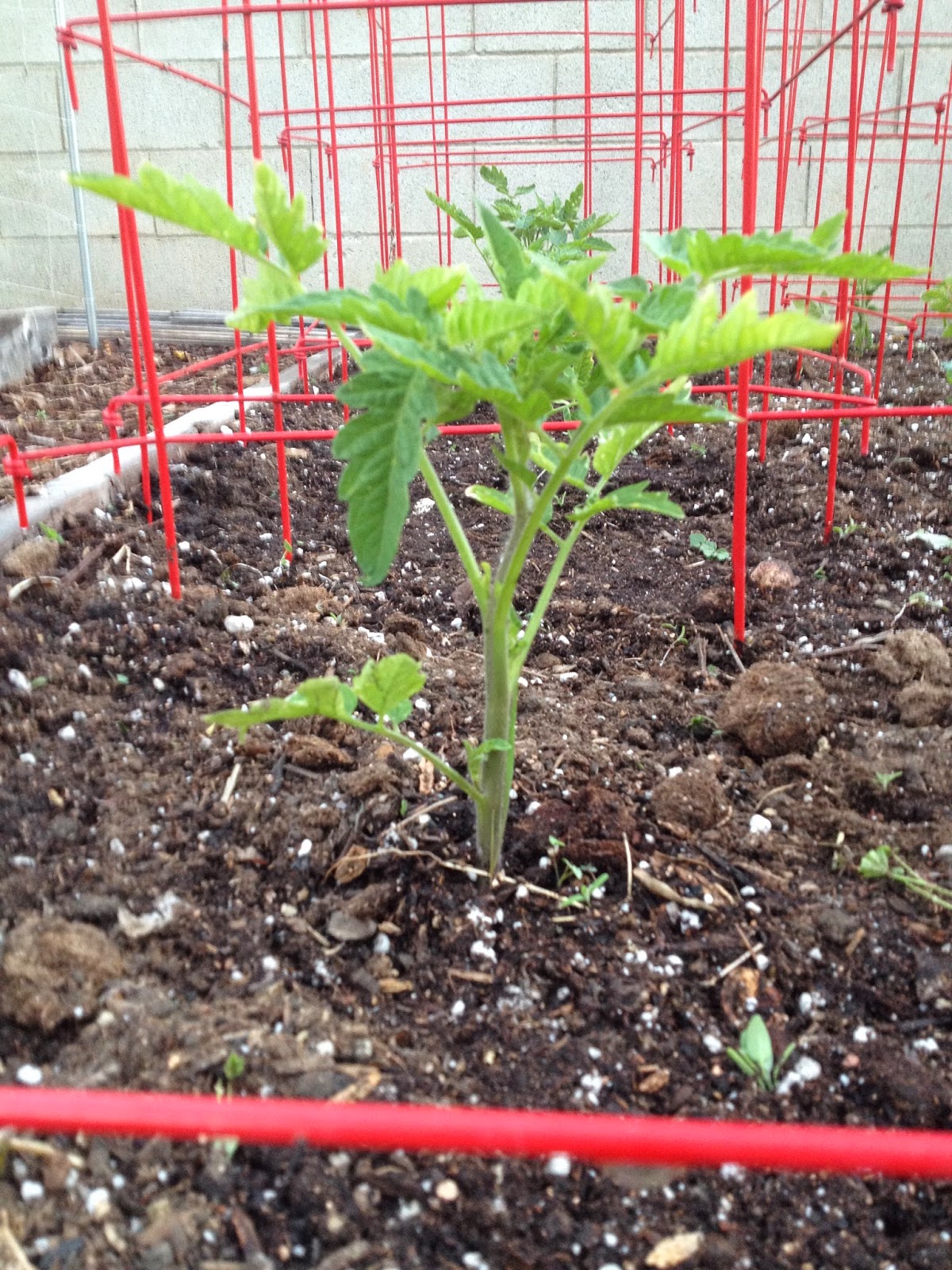 Bed 3: Yellow Pear and Cherry tomatoes (which I need to buy cages for), spinach, lettuce, squash, and cucumbers (back along the trellis). 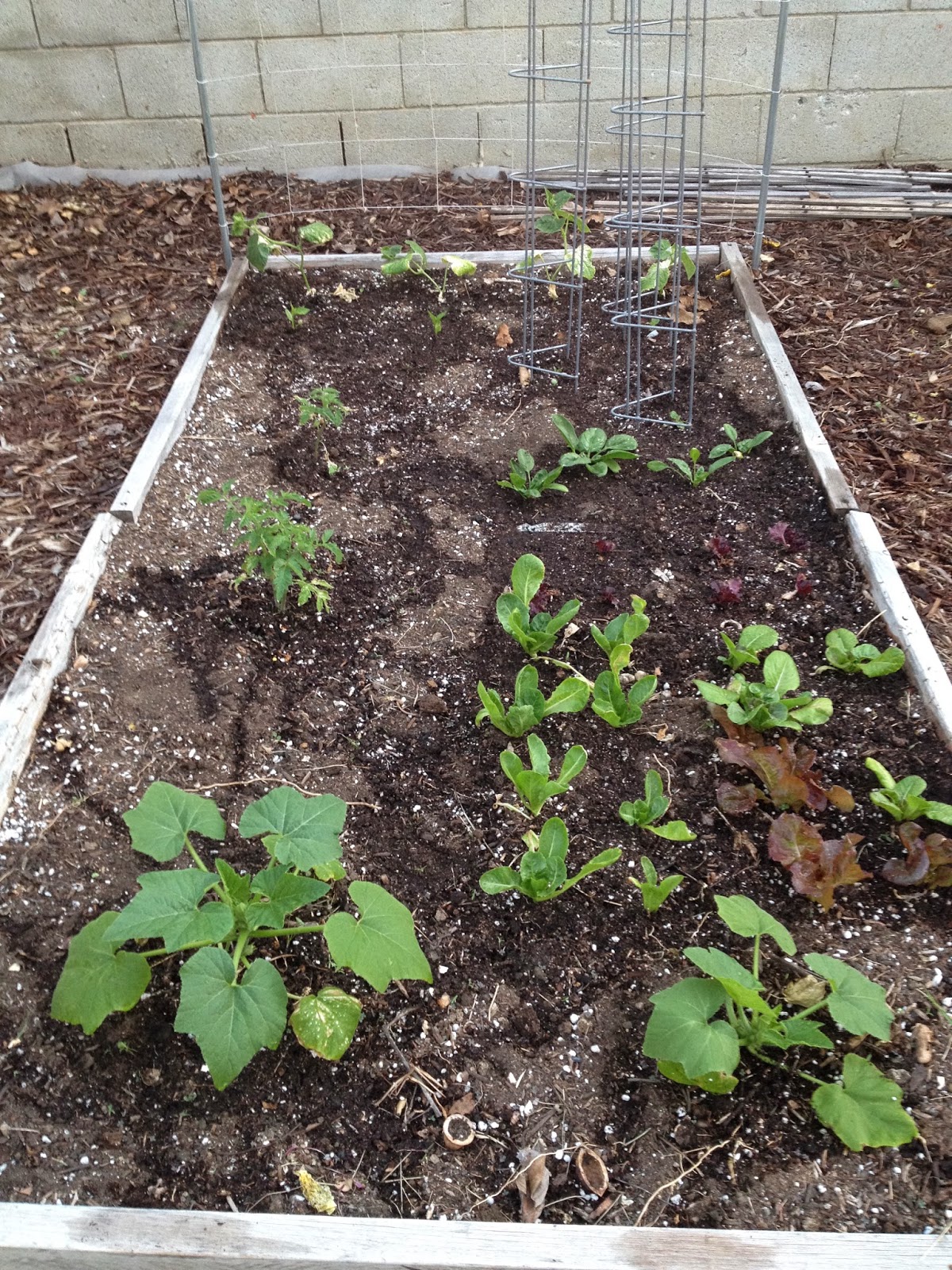 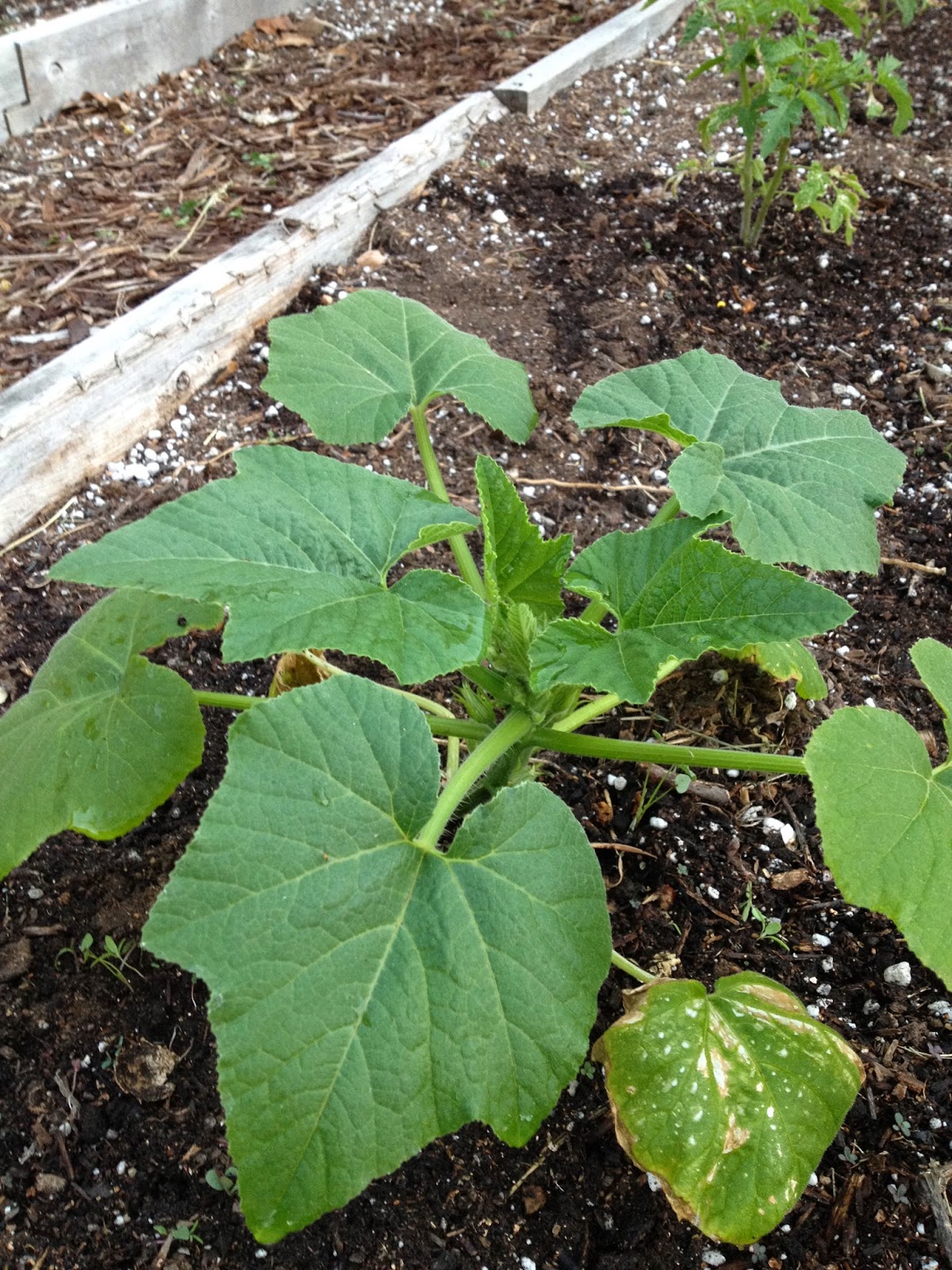 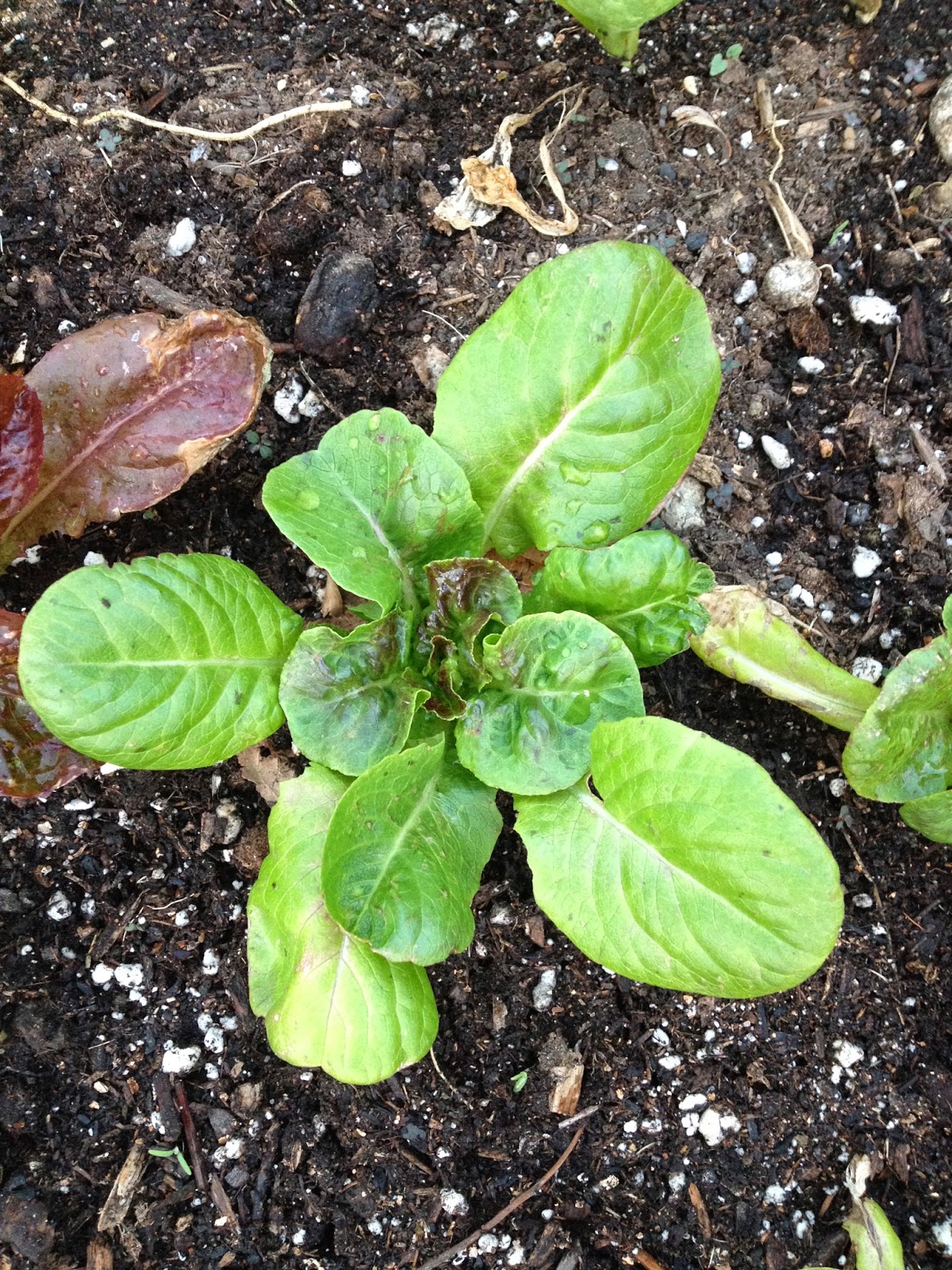 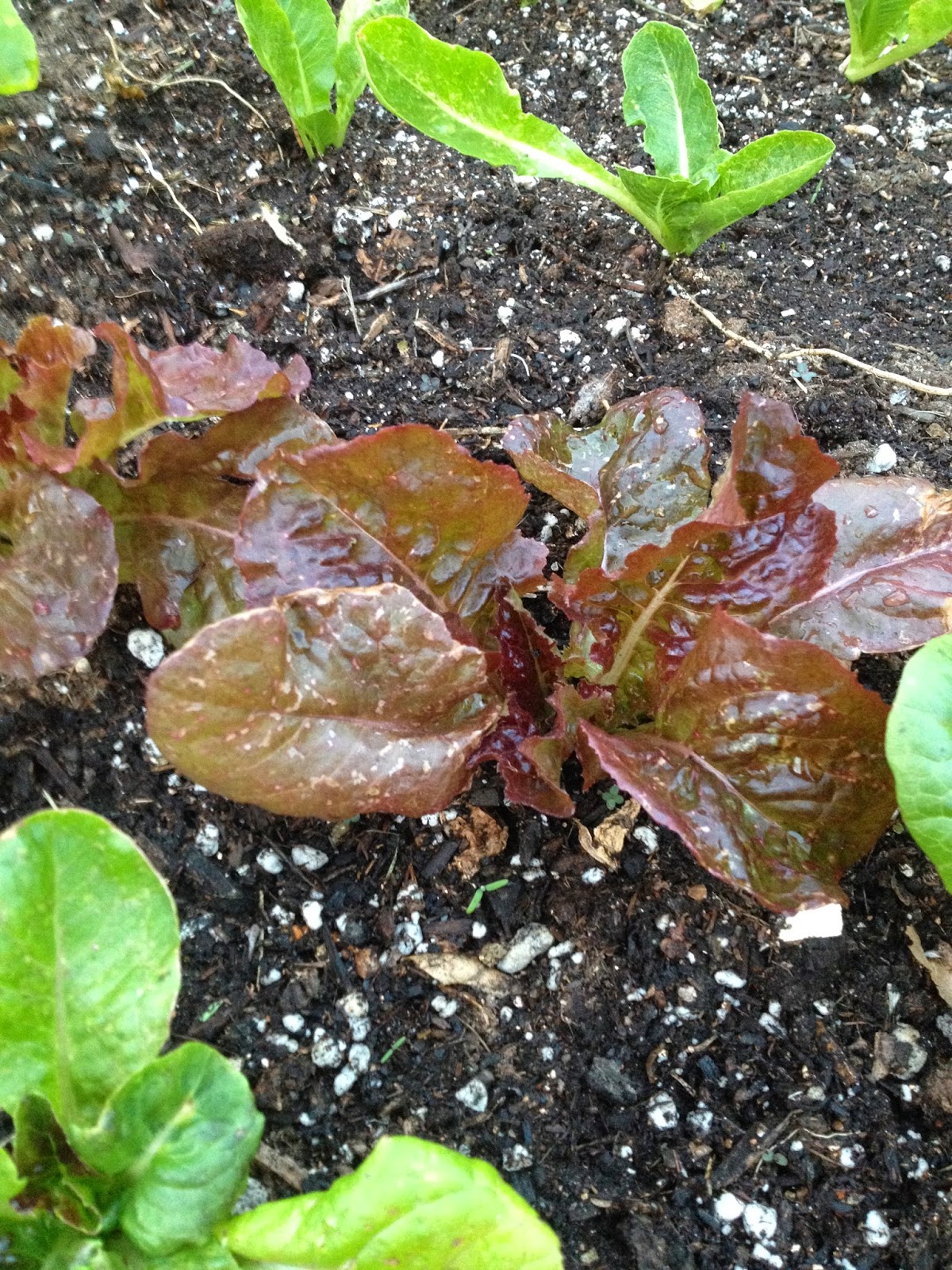 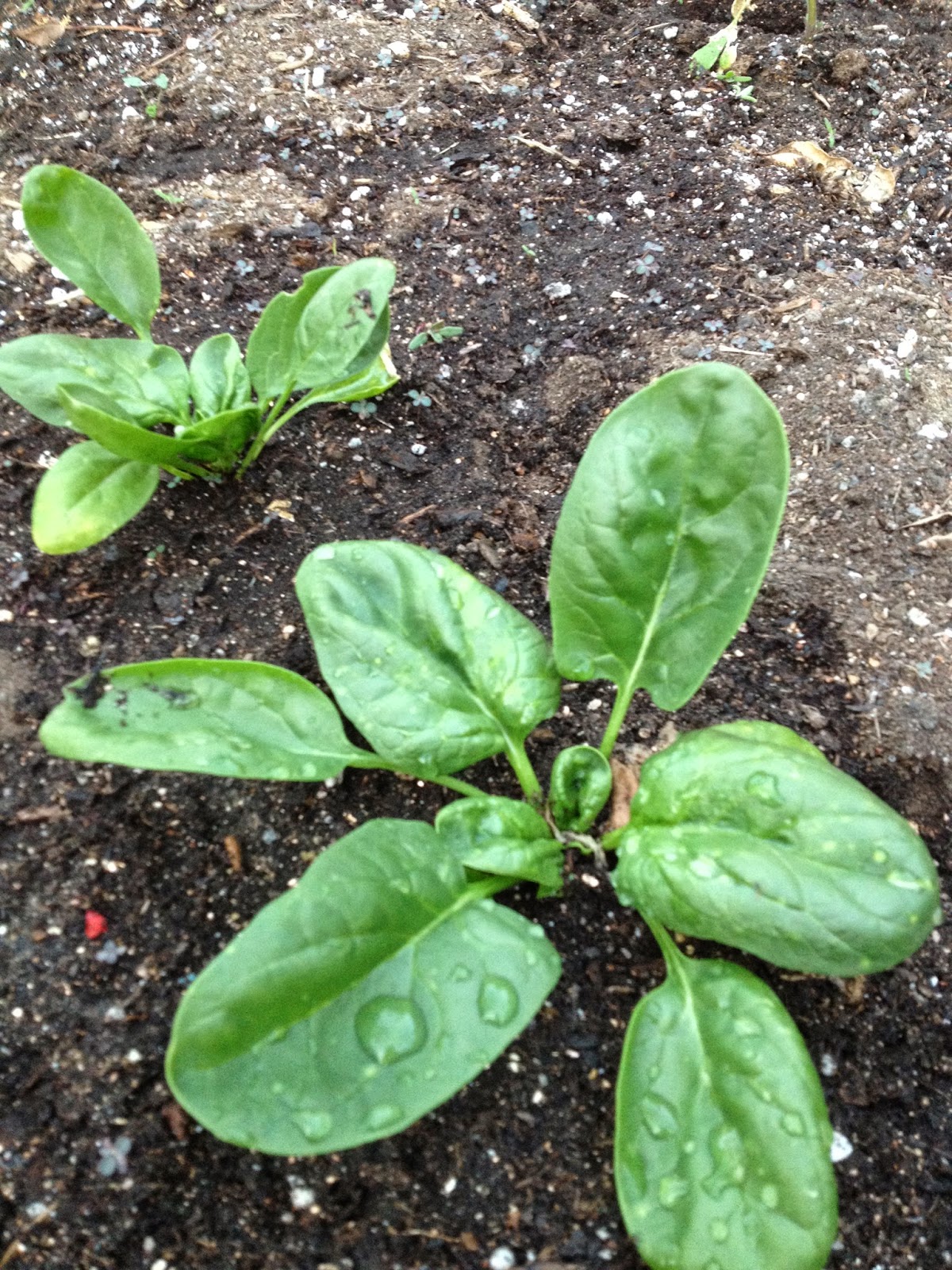 Eggplant. This is an Italian variety. It's been very slow growing, so I hope it will make it. I grew three plants. 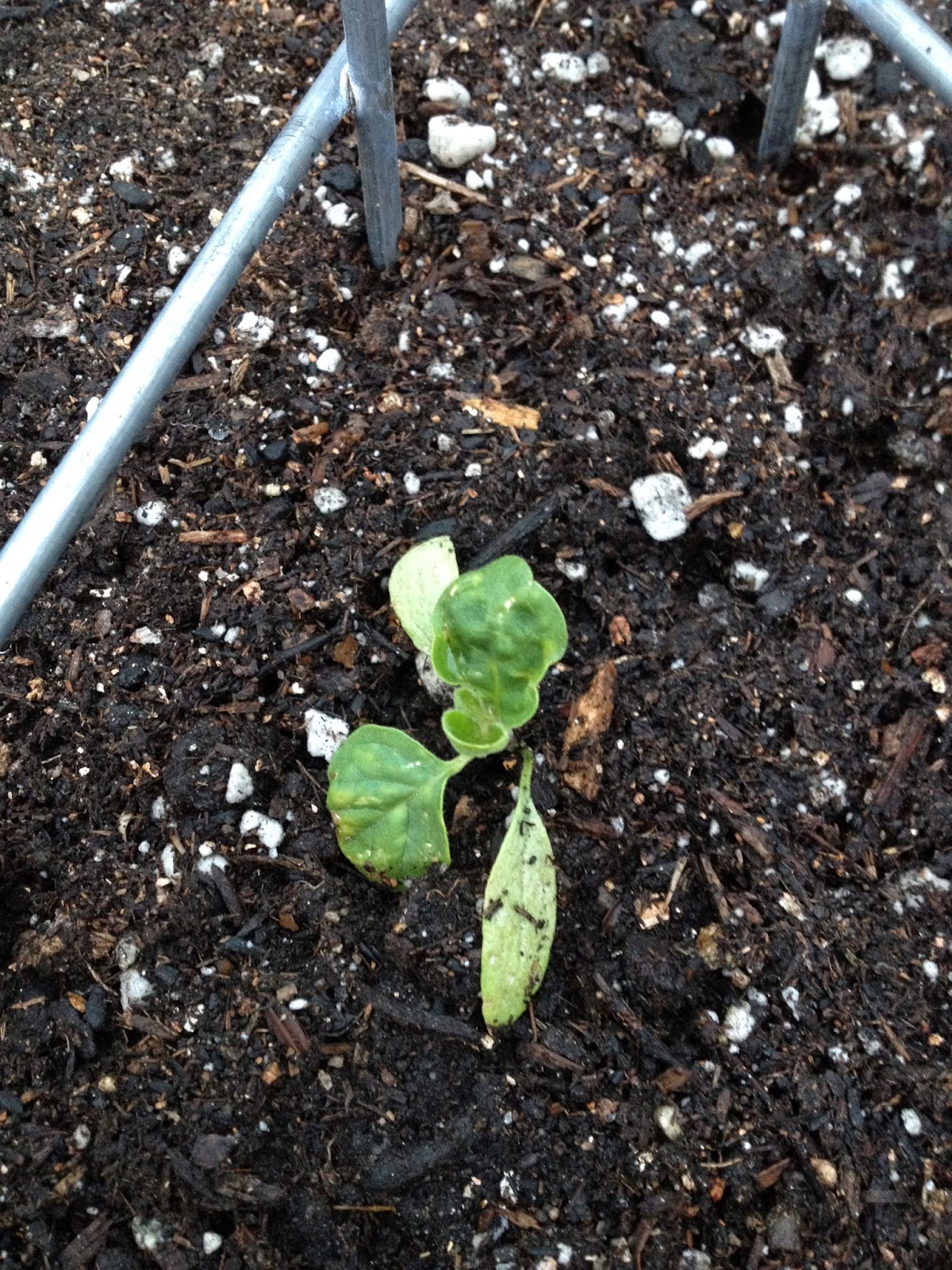 These are the pickling cucumbers (with little red bell peppers there to the left that also need cages). I have not had good luck with cucumbers, so I'm hoping for the best. You can see the leaves on the bottom turned white. That's because when I first transplanted them I was watering overhead and the leaves got sunburned. The new growth seems okay, so fingers crossed. 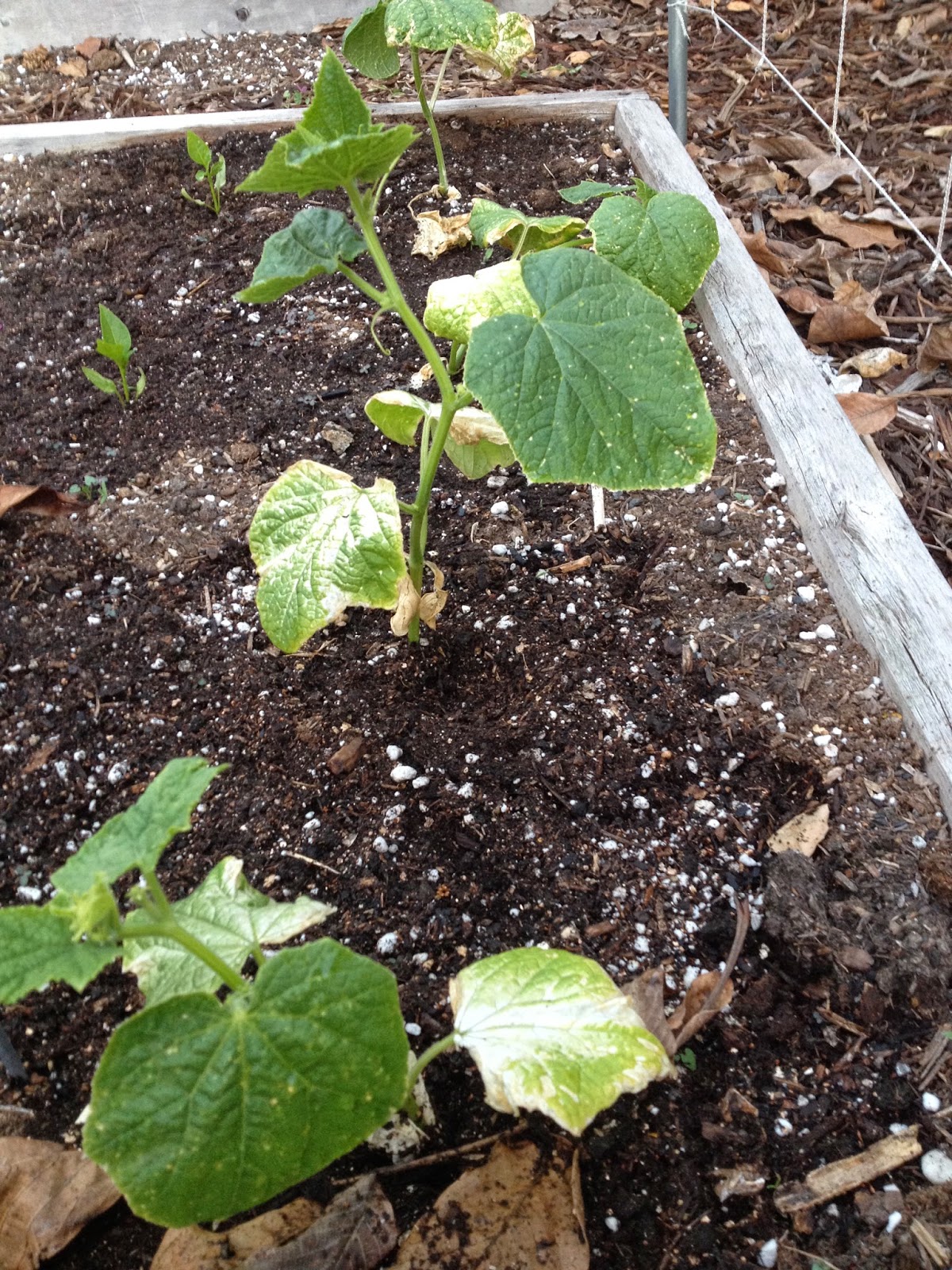 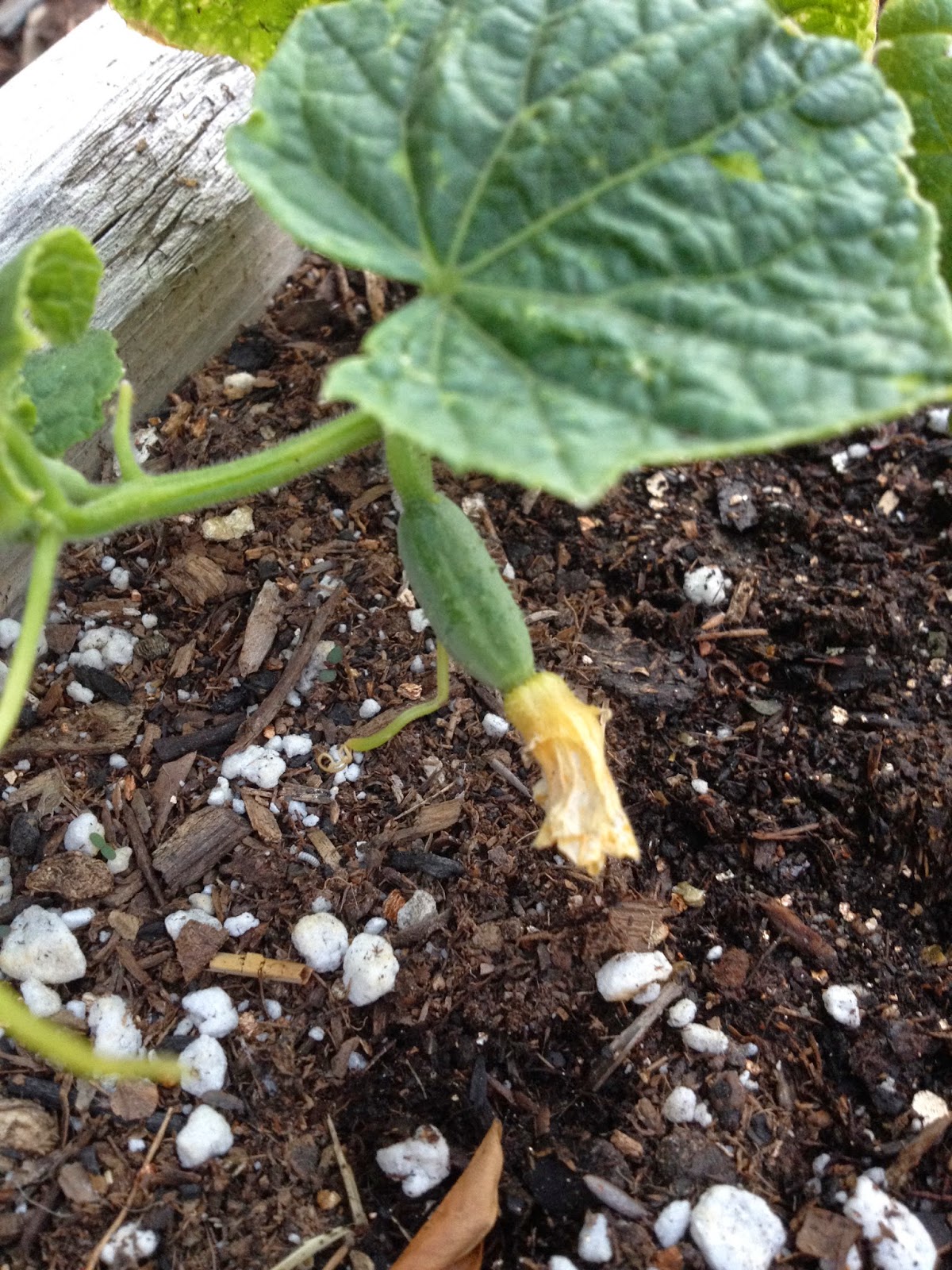 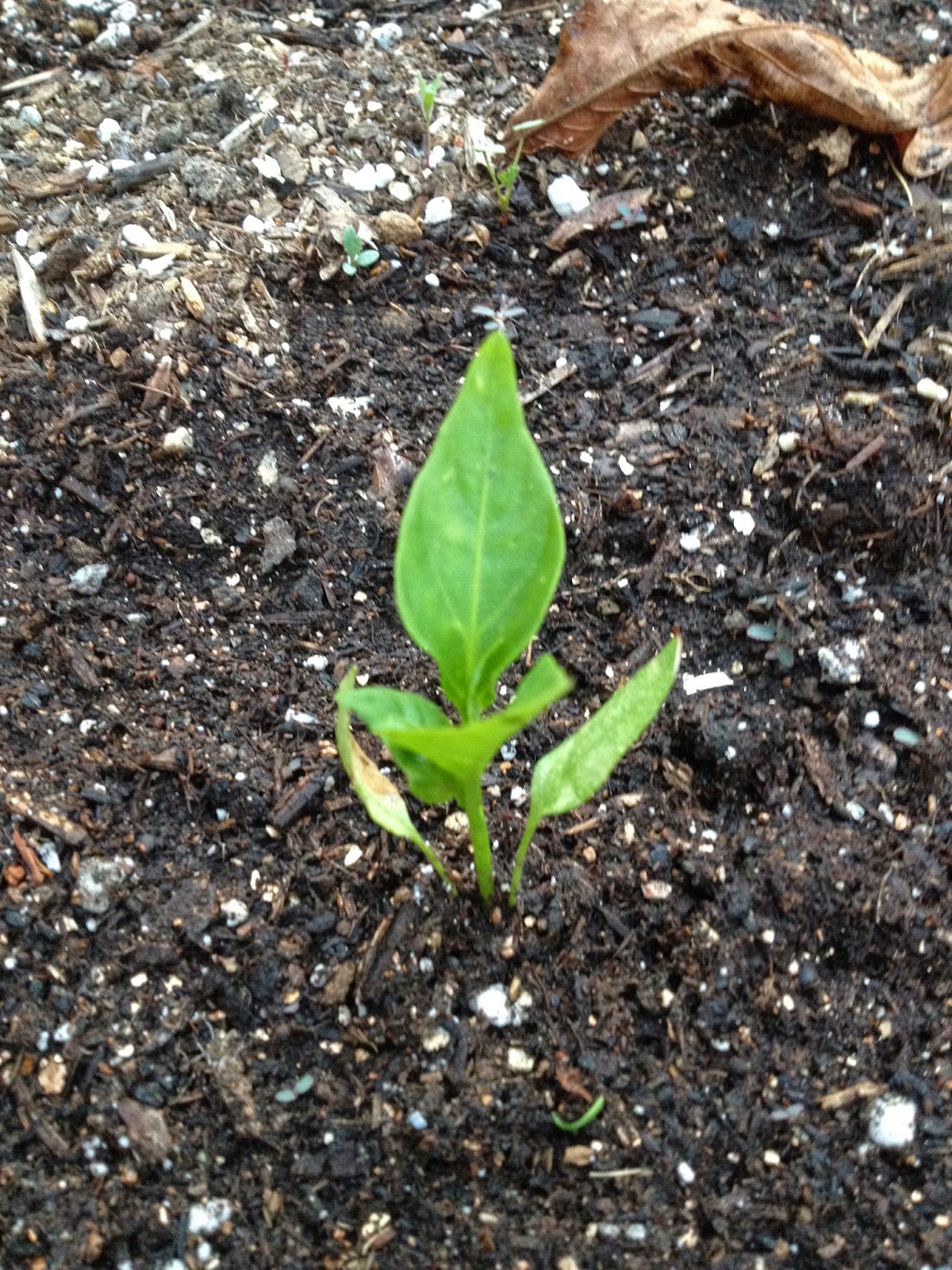 And here's the Chard jungle still growing strong from last year, but which needs thinning badly. 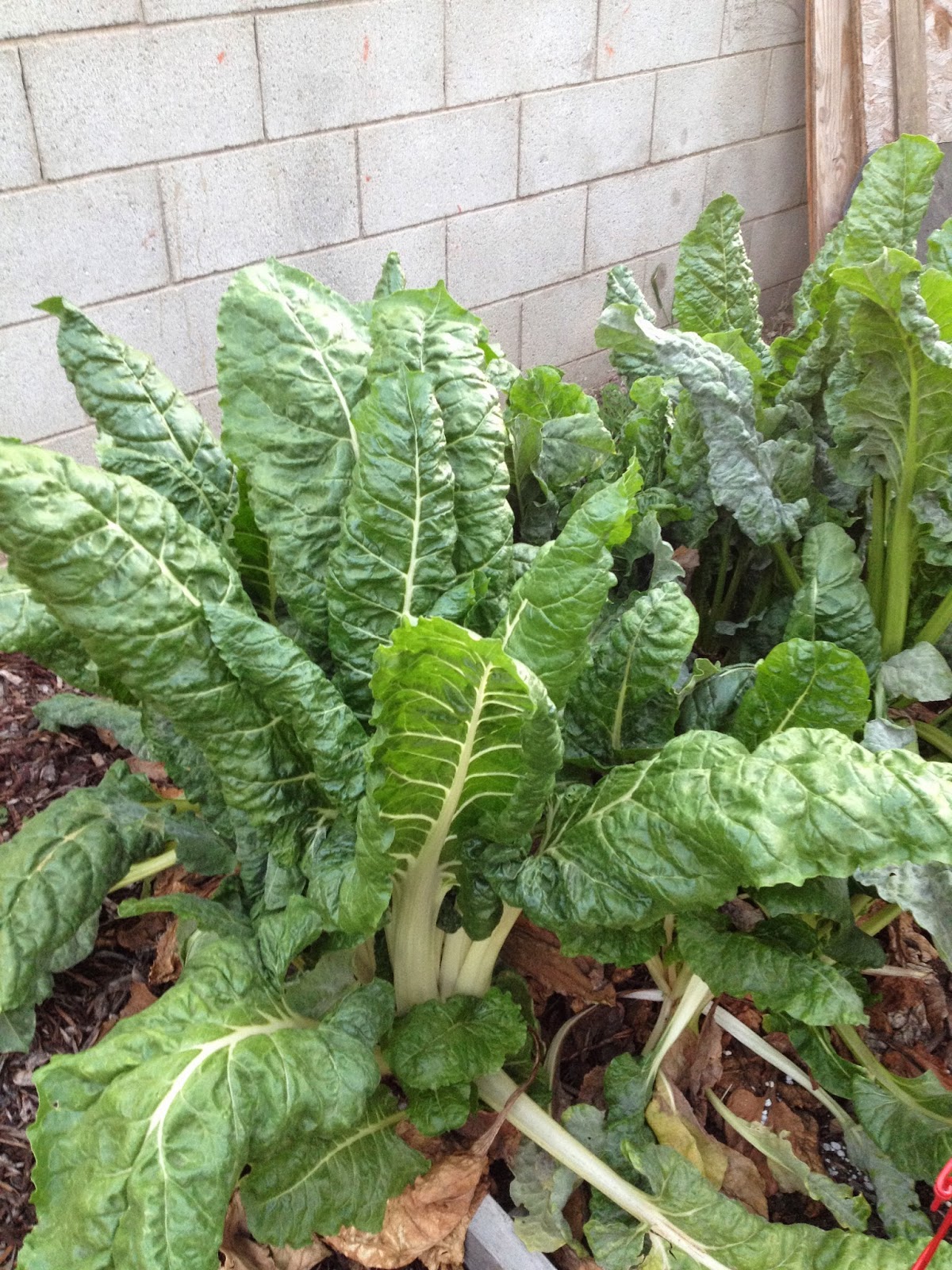 So far, besides the Black Seeded Simpson lettuce that I fried, since transplanting, I've only lost one tomato plant and one pepper plant. Not bad at all, I think.

Gardening is good for my soul. I'm so glad I just went ahead and put those tiny seeds in the soil. Watching them grow reminds me of miracles and progress and bounty.

Three things I need to pay more attention to in my life.
Posted by Jenna at 11:12 PM

I'm amazed at your gardening skills. I would love somewhere that I could plant a garden before the end of May!