An Angel for Conor 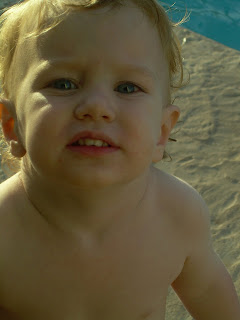 Since he was born, Conor has seen angels. I'm sure of it. You know how babies are about six weeks old before they can smile? Well, from almost his very first day on earth, whenever we laid Conor in his crib to change him, he would immediately crane his neck to look to this one particular corner of his crib and he would smile. I mean really smile. It happened every single time for his first month or so of life. We would call the kids in and say, "watch this", and put him in his crib, and sure enough, there he would go. We would look at that corner of his crib and see nothing, obviously, but we liked to believe that Conor had a visiting angel who just wasn't ready to say goodbye yet, and only he could see him. (or her) I actually felt a tinge of sadness on the first day that I laid him down in his crib for changing and he didn't look over for his angel. He's on his own now, I thought.

But thankfully, he is not.

Conor has a very serious allergy to walnuts. We don't find a genetic link to this allergy on either side of the family, so it's concerning, and completely new territory for me. We've had some close calls with him, the latest last Sunday. And I'm a little weirded out that the one tree on our property is a walnut tree, of all things, but I'm equipped with Baby Benadryl and an Epi-Pen Jr.

Conor also is more daring and obstinate than any of my other kids have been. He figured out how to open the doors, before we knew he had figured that out, and while I was in the bathroom, he went out the back, grabbed the rake, and headed down the driveway and across the street dragging it behind him. The neighbor brought him back, just as I was freaking out to come out of the bathroom and find the back door open. I have tried to hammer into his 21 month old mind that "You don't go into the street! You will get SMASHED!" And now that he's proficient at opening the front door too, we try to be vigilant about only using the back door (which is much harder for him to open) and keeping the front door locked.

Last Friday, Dylan and Aiden came upstairs, where I was with Lyndsay and Conor, to tell me they were going across the street to Sarah's house, the girl with Down's Syndrome, to watch a movie with her. She lives directly across from us, with a large picture window that looks onto the street and our house. Lyndsay and I kept tabs on Conor who went from toilet to toilet to dresser drawers to brother's top bunk to toilet to. . .well, you get the picture.

But then he was quiet.

Bad sign. I called for him. He didn't come. I heard the whisper, "Go check on Conor," and I called him again. Nothing. Again, more urgently, "Go check on Conor". I looked through the upstairs rooms and didn't see him, and peeked over the stairs to see the front door open. The boys had forgotten to turn the lock. This is happening in lightning fast speed, of course, less than a minute from the first time that I called his name, and I flew down the stairs and out the door where at that moment I saw a car stopped in the street just before our house, Conor standing on the sidewalk at the edge of the driveway (where he could see his brothers through the window across the street, and where I'm sure he was battling with the whole, "Mom said don't go in the street or I'll get smashed" thing, a dilemma of gigantic proportions to a toddler) and I saw Dylan come swooping across the street and sweep him up into his arms and bring him home. It was literally all within 60 seconds since I had last fished him from trouble with Lyndsay. I was so grateful that I had obeyed the prompting. I was so glad that the horrific scenarios playing out in my mind had not been true.

But the best part for me happened later that night when Aiden came and sat down next to me and said, "Mom, the coolest thing happened today. I was watching the movie at Sarah's house with my back to the window and all of a sudden I had this strong feeling to turn around and look out the window. So I did, and there was Conor standing in the driveway. I told Dylan, who ran out to get him."

I told him how I had had the same kind of feeling, and I told him that it was the Holy Ghost warning both of us at the same time so that we could protect baby Conor from danger. I wanted him to know and remember that feeling because it's so hard to adequately describe, and yet undeniable when it occurs, and here was my newly baptized son having maybe his first real experience with this gift that he's been taught about his whole life. I told him how proud I was of him for obeying immediately and not questioning such an odd prompting as 'turn around and look out the window'.

Even better, later that evening, Sarah's mother came over and told me the story from her perspective, that they were all glued to the television, when out of nowhere Aiden spun around in his chair, looked out the window, and yelled, "Conor!" She asked him how he knew to look, and he simply said, "I just had a feeling I should". I love that.

I believe that every person has a mission to fulfill here on earth. I believe that each of us comes equipped with talents and even trials that will help us to fulfill the measure of our creation and our unique earthly purpose. I believe that Conor must have greatness in him to have such opposition so young in his life, but I think that's why he has angels. And I thank them for helping me to keep him safe.
Posted by Jenna at 5:22 PM

What a horribly wonderful experience for you all! A great quick read to add to the chills of it is "The Message" by Lance Richardson. Indeed there are loved ones watching out for us on the other side of the veil. :)

I love that he smiled at an angel when he was tiny, and what a neat story. I'm so glad it turned out fine and that Conor didn't get hurt. The holy spirit may have to work overtime for him!

Putting the FUN in DysFUNctional said...

This story gave me chills! So glad everyone is OK.
I came here from Piper's blog. :o)

What a beautiful experience for you guys to share! So very glad to hear that all was good.

Jenna, I admire you and wish my mothering skills could be half of what yours are!

Wow. I am glad it all worked out for the best. I think in a way maybe we all need reminders of why we are all here and by who's grace that all happens from time to time.

I came here via Piper's glowing praise of you and the time she spent with you.

I love it! I'm so glad Conor has good big brothers who listen to their still small voices and act quickly on what they hear. There have been a couple of times where I didn't listen to my little prompter and ended up in car accidents (the roll over and then the deer)..so it's always a good thing to know what it is and really pay attention to what it's saying.

What a blessing the gift of the Holy Ghost is!

You wrote that so well!

What an amazing experience. Thank God for being God, right? He's always taking care of us, and showing us his love. We just don't always get to see it.

I believe in angles!

Jenna Love!
We've had plenty of evidence in our family that Heavenly Father is taking care of us. I acknowledge His protective care with humble gratitude. I am most grateful that your children have been taught to recognize the voice of the Spirit
and to act upon the promptings. We should never stop praying for the health and safety of our children. I pray for you all constantly, knowing that power that resides in the Almighty. Thank you for sharing this account. Way to go, Aiden! Good work, Dylan!

Love,
The Ancient of Weakness

Goosebumps and tears over here. Amazing.

-dab dab- This is beautiful. What a testimony builder for your son, as well. I'm sure he will remember this experiencer of feeling the Spirit for the rest of his life. Good job, Mom.

How absolutely beautiful! I've missed reading you and now I know why . . .

"I was so glad that the horrific scenarios playing out in my mind had not been true. " I get this all the time and he can't even walk yet . . . I just can't imagine what that will bring.

Just before reading your blog, I wrote a letter to my missionary son, telling him that the spirit is there whenever we bear testimony, and I felt Him as I read your blog. Thanks for bearing testimony of the Holy Ghost and angels. BTW, my babies also did that looking in the corner and smiling thing, and I, also, always thought it was angels. Isn't it amazing to know our new babies just came from heaven?

That story gave me tingles! I'm so glad that he wasn't hurt!

BTW, found you from Piper's blog. I love the posts you two did for one another. So sweet! Hope you don't mind if I frequent you blog more often. =)

Wow, I hate those kind of things, and yet it brings to mind all that we learn through opposition and how grateful I am for a personal relation ship to the spirit that allows these moments to make sense. I had an angel baby too--I loved it. We had a picture of Christ on the wall and she was about a month old when I happened to be holding her, talking to someone, near the photo. She did as close to a scream as a preemie one month old could do and just stared at the photo. For the first seven or eight months of her life, she would stare at it whenever she was close enough to see it, and smile that knowing smile that only a fresh spirit can do.

What a WONDERFUL story!!

you should submit that to the Friend Magazine!!!!

(i found your blog on LDSwomenBlogs)

I love it when we have those moments of recognizing the Holy Ghost in our lives. I love it even more when our children have those moments also. What a very special experience for your sweet family. And I'm so so glad that Conner was okay. You have a special family and you are an amazing mother. It shows in so many ways. Thanks for sharing this post.

i got chills as i read this.

i got a strong feeling that they were gone that afternoon that my teen daughters ran away (and were gone for 3 weeks and 4 days). i never felt that they ran away until that first day when they took off. and i don't know why i felt it .. but i did.

hug him tight, best to you, kathleen