Things We Have in Common 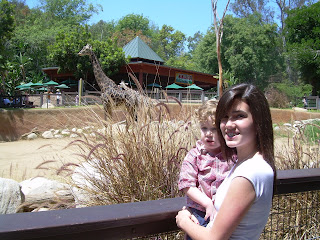 I took Lyndsay and Conor to the zoo on Friday to pass some time in the lovely weather while Aiden and Dylan were both away at scout camps. The animals were in rare form, probably because the weather was just perfect, and we got there right as they were opening, around 10am. There were babies galore, which always does my heart good. Sometimes life in captivity can be a sad thing, but for many of the animals at the L.A. Zoo, they have been rescued, rehabilitated, or adopted. To see them multiplying and replenishing the zoo is a good thing.

We saw baby babirusas. Have you ever seen a baby babirusa? Have you ever seen a grown up babirusa? They're pretty ugly. I am familiar with babirusas because my children have a book about the weirdest animals, and babirusas are featured on a double page spread. They are weird. And ugly. But the babies? Too cute for words! They were so tiny, and bald, about the size of, ummmm. . . large guinea pigs on longer legs? But they twittered along on their little feet, the two of them, following their ugly mother wherever she went.

We saw baby peccaries too, and a baby giraffe (wouldn't want to give birth to that!), and some kind of baby mountain goat-gazelle-antelope thingy. They were also adorable. Oh, and some baby monkeys! It was a great day.

But I noticed that I have some things in common with the animals. For one, this is how I feel right now in my life: 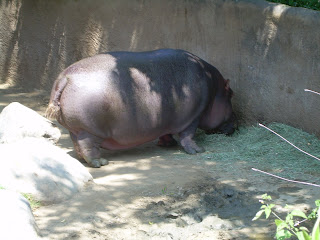 Must. Get. Back. In. Shape. It feels impossible, doesn't it big mama? Here's looking at you. 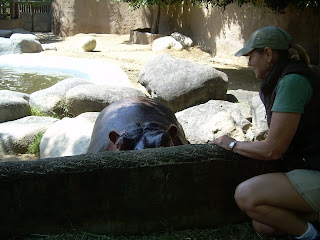 For another, I'm sick of seeing celery too, man! Bring out something sweet for heaven's sake! Some carbs! Somethin'! 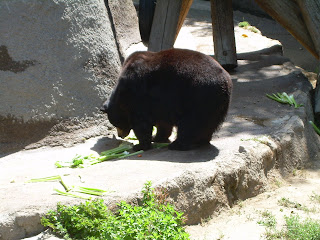 Oh, and check this guy out. He's the tallest giraffe. The proud daddy. I think he's like 18 feet tall. But still, it isn't tall enough for him. He wants to be taller! Just like I want to be skinnier (and smarter and healthier and prettier). . . it's never enough! We want more! Why didn't he just get the low leaves on the other side of the tree? 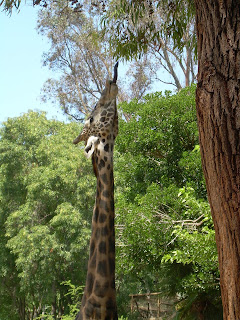 I totally get it. Lock me up and throw away the key! I feel like I live in a zoo most of the time anyway! 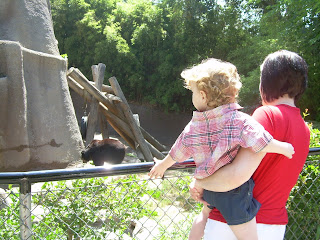 I love the zoo!

What Luisa said. If anything, of late, I'M the hippo.

I have a sudden hankering to take my kids to the zoo.

I so love zoos. My daughter has volunteered at the Zoo here in Utah for 3 years and it's just too much fun. We got a membership a few years ago and I love being able to go but not feeling like I have to stay six hours to get my moneys worth! And the Hippo thing was totally uncalled for, Jenna, you're a sleek mama gazelle!

you crack me up!

That looks soo much fun. I hope to go to the zoo soon. Hippo's are soo cute are'nt they?

I also say "ditto" to Luisa's comment. And you crack me up too!

But when you showed the hippo and said that was how you see your life, I thought you meant something about staring at a stone wall ... you are NOT a hippo. My nerves!