A Second Set of Eyes 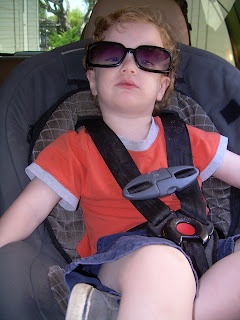 I have a problem. My two year old is a backseat driver. It's ridiculous. This is what it's like:

Later, as we approach an intersection when the light is turning yellow.

Conor: Orange!
Me: It's yellow, Conor, and I can still go through.
Conor: Orange.
Me: Whatever, Conor.
Conor: Not green, Mom!
Me: It's okay, Conor. Just let Mommy drive.
Conor: Alright.

Later, as I make a right hand turn on a red light.

Conor: Red, Mom!
Me: I know, Conor, but there's a rule that says you can turn right even when the light is red as long as no cars are coming. Why am I explaining traffic light rules to you anyway? You're 2!
Conor: No, Mom, RED!
Me: Just be quiet, Conor.
Conor: Alright.

Later, on the freeway.

Conor: Run faster, Mom.
Me: I'm going as fast as I can, Conor.
Conor: Run faster!
Me: Do you see these cars? If I go faster, I'll hit them! Just let me drive!
Conor: Alright.

Stopped at a red light, which then turns green.

Conor: Green. Go, Mom.
Me: You better be quiet back there. I'm serious.

Who taught this kid to talk anyway?
Posted by Jenna at 9:46 AM

I have lived through that phase many, many times. And we'll have it once more.

My driver's ed teacher taught us, "Yellow does not mean slow down. Yellow means clear the intersection."

Oh my gosh.. I have to say I was laughing reading this entire post. he is so cute...

As if husbands aren't bad enough (when they let us drive, that is) :-)

Funny stuff! I remember my older kids going through that stage, like miniature backseat drivers, all at the ripe age of 3 or so. Relish it while you can, right? :)

I thought the goal WAS to talk! lol!

He sure is a talker. I am glad though that he will be a good driver.LoL!

I have one of those back seat drivers too, my 4 year old Jillian. I thought she was going to have a cow one day when I turned right on a red. It got even worse after her pre-school made a visit to Safety City.

now, when Gen backseat drives (much bossier now than when she was little, though i didn't like it then either) it's not cute. your son though- adorable.

I read this a few days ago on my phone while waiting for class to start and I laughed out loud so hard and then read it to Orion who then laughed out loud just as hard as I did. Conor's awesome..funny little man!

that's funny. thank you for sharing that!!

Too funny - thanks for the giggle!