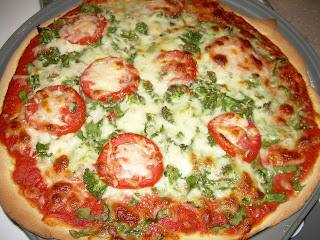 I grew Swiss chard in my garden because somewhere I saw (probably in a seed catalog) where it said that Swiss chard was so easy to grow it should be included in every garden. Well, I couldn't be left out of that group, so I planted three squares of Swiss chard (4 plants to a square). I had no idea what to do with it when it grew. And it grew.
But then I saw my garden-inspired sister toss out the idea to slice it up and put it on a veggie pizza. Brilliant! So, I harvested several leaves/stalks (whatever you call Swiss chard) and a whole pile of spinach and sliced it up thin. I also added the baby broccoli sprouts coming in. Using the easy and always reliable recipes from My Kitchen Cafe, I whipped up some pizza dough and homemade sauce and mounded the veggies on top. So much so that my husband was excited about the prospect of pizza until he walked into the kitchen and saw them and changed his mind. I put the cheese (fresh mozzarella, only fresh) on top of all the greens and when they were done, he was so relieved to see how much greens shrink when cooked. 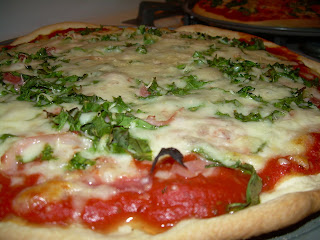 He was also relieved to find that they were delicious. That's right, baby. I'll get those greens in you one way or the other!
Posted by Jenna at 6:28 PM

Looks delish! We Moms have to try all kinds of trickery to get the family to eat healthy.

We love swiss chard. Have you seen the ones with colored stalks? So much fun and oh so yummy. My favorite way to eat it is boiled and the served with butter and vinegar. Sinfully delicious!!

My mouth is watering. That looks SO good. One of our favorite ways to eat swiss chard is sauteed in a little bit or butter.

I'm not sure how well this would go over with the crew, but I used to put Swiss chard in my "green" strawberry banana smoothies. Chard is my favorite green for doing that, because it is so sweet.

The biggest problem with doing this is green + red = really gross brown. Quite unappealing visually.

Maybe if you serve it in an opaque cup. With a lid.

We need a cook like you around our house. You wouldn't be offended if I put my feet up and did nothing while you slave away in my kitchen, would you? hee hee