Garden Update: Not So Lovely 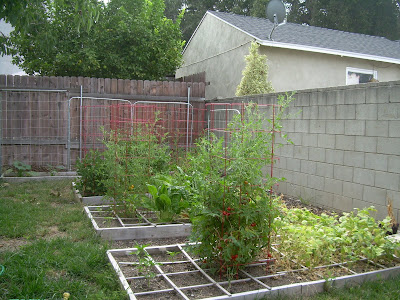 Well, I figured it wouldn't be fair if I only show you when things go well, since many times they don't. My poor garden! It's not as beautiful as it was last year, sadly. I have been so busy, and I have neglected it, I'm afraid. As in, we have a heat spell and I forget to water. My beans have really taken it the worst. They are really sad looking, but I pulled all the beans off to try to give them time to rest and hopefully recuperate, at least some of them. They did put out a great harvest, though, and I have several pounds of beans in my freezer. 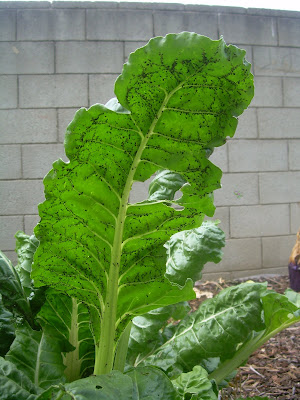 But here's the really bad part: aphids. It was like one day they were not there, and I swear, like 2 days later, there were billions of them! Only on the Swiss Chard. And worse than the aphids, were the ants who were herding them. Apparently, aphids produce a sticky "milk" that the ants love, so they shepherd the aphids to collect it. There were so many ants I couldn't walk down that path in the garden or I'd be swarmed. And they bite! 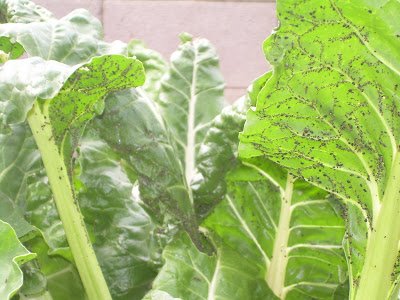 So, I gave up. I know I could have tried ladybugs--and there were many ladybugs there, doing their ladybug best--but it's not like Swiss Chard is my favorite thing, and I just couldn't deal with it at that moment, so out they came. I booted up and gloved up, and went out with my shovel and just pulled up all the Swiss Chard and dumped it. And boy, were those ants mad then! 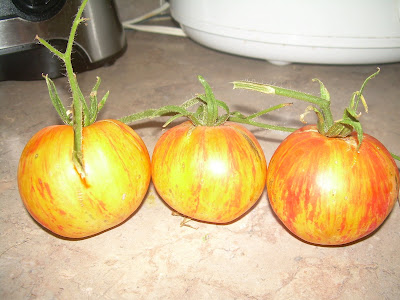 But on a lovelier note, here are my first three striped tomatoes, which I think are so beautiful. I need to make a BLT, I think. With extra T. 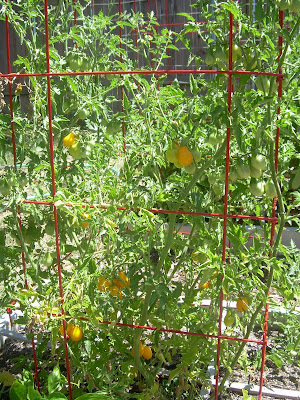 All of the tomatoes are doing well. Here are the yellow pear tomatoes, which I can't stop eating off the vine, warm from the sun. I wish my kids were home to help me keep them eaten! 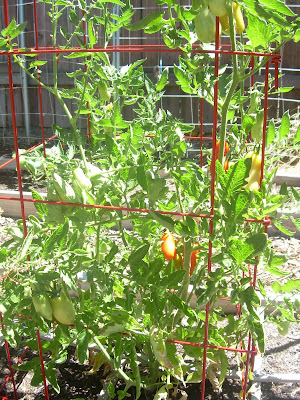 I have two varieties of paste tomatoes growing, which are really my favorite part of the garden, because I love to make my own sauce and put it up for all winter long. This top plant is a San Marzano, which is prized as being the best paste tomato in the world. I did not know that at the time, but I am so excited to try them! As a plant, the leaves are thinner and the plant itself is more open than the Romas, which grow very bushy and thick, with much wider leaves. 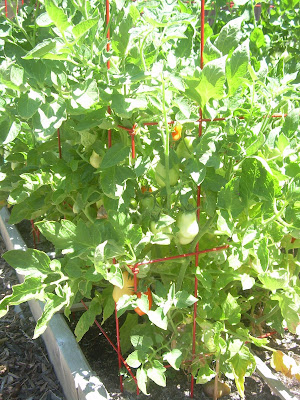 This is one of the Roma tomato plants, where the tomatoes are starting to turn red, finally. I can't wait! 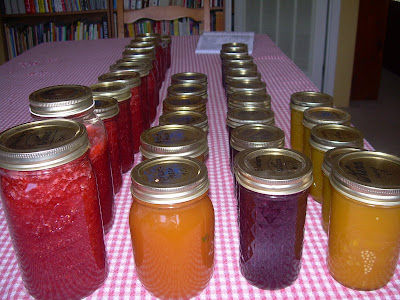 I've also done a lot of jam making this summer as fruit has gone on sale. There's strawberry, apricot-peach, blueberry, and mango-vanilla. It is all so yummy! I made 35 pints all together, but we've eaten some and I've given some away. Still, I think we'll be fine through the year till next summer! 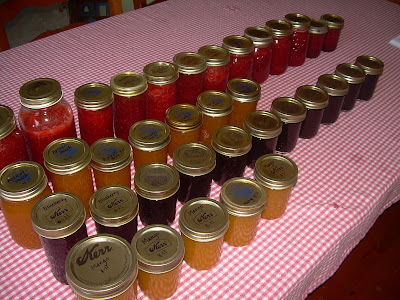 I guess we're having lots of jam on homemade whole wheat bread, pancakes, muffins, and waffles this year! But I'm not complaining!
Posted by Jenna at 12:16 PM

Except for the aphid/ant thing, I think you are doing spectacularly well! It's so exciting!

Maybe we could do a jam exchange. Are you up for trying some quince or some rhubarb?

Luisa, that would be wonderful!

I can't wait for my tomatoes to turn red. I have big plans for them! That BLT sounds really good right now.

For my 5th Grade science fair project I tried a variety of household mixtures to see what would kill aphids on our rose bushes. The winner (besides me): 1% salt solution. Safe and a great chore for Conner. Just mix it up and put it in a spray bottle.