All Together Again: Day 3

Today would be better.  I told the kids to be ready to leave at 8am for a hike in Eaton Canyon.  At the last minute, Dylan decided he didn't want to go because of his chronic knee pain.  He felt sure his knees wouldn't be able to handle it and then he'd just be hurting for the next few days.  The other kids were pretty annoyed by that (thinking that it was kind of a cop-out excuse since he doesn't always baby his knees), but I put them in the car and talked with Dylan privately for a while.  I know he's so super frustrated by the pain in his body.  He's so young and he feels like he's been cursed with a faulty body that holds him back from the things he wants to do.  He feels like doctors can't help him and there's nothing he can do and it's incredibly discouraging and frustrating to him, and I think it's the pain and frustration that colors his outlook on other things in life.  He feels like it's just not fair.  And it isn't, true.  We talked about that too.  My heart breaks for him.  We had a nice chat and in the end, I left the decision up to him whether he joined us or not.  He opted to sit this activity out, so we left him at home.

Eaton Canyon is in Pasadena, and hiking it was on my summer goal list.  Though there are several different hikes in Eaton Canyon, we wanted the waterfall one, and according to the internet, it was 1.5 miles each way, so we brought Conor along.

Yeah, it was not 1.5 miles.  At least 3 each way.  At least.  But we had a good time, and it was beautiful, not too hot, and great exercise.  At the end of our trail was the waterfall (not too substantial since it's been such a dry summer, but exciting nonetheless. It was a pleasant reward.  The boys took off their shirts and shoes and played in the water.

On the way back, Aiden and Sean hiked in the (mostly) dry riverbed, while Lyndsay, Conor, and I hiked on the trail, crossing the streambed periodically.  After some time of not seeing the boys, we decided we'd better wait for them on the side of the trail, since their hike was more cumbersome and time-consuming than ours.  But they didn't come, and they didn't answer our calls (as in screaming their names calls, not phone calls---Aiden had the backpack with the cell phones, water, and car keys in it.)  Conor was very worried.  "They're lost," he kept saying.  "They're never going to find us."

"Have some faith, Conor," I'd reply.  "They're good scouts and they know how to follow a trail."  We decided to keep walking after waiting about 20 minutes, thinking that even though we hadn't seen them, surely they would think to work their way toward the trail head.  We got a little farther down the trail and saw a small crowd gathered looking at something.  It was a huge rattlesnake slowly slithering in the bushes just off the trail.  I had never seen a rattlesnake so big!  We watched it for a while, and then it moved to cross the trail, which it did, leisurely.  We gave it space, but man, was it cool to see!  Just after it slithered into the bushes on the opposite side of the trail, out of sight, around the corner came Aiden and Sean.  Finally!  Turns out, they had decided to sit and wait for us, thinking they were ahead of us on the trail.  No matter, everyone was safe, and we hiked the last bit to the end.  We were tired!  We had hiked for over 3 hours.  And listened to Conor micromanage the entire way.

We stopped for In-N-Out burgers on the way home and then we showered and rested a bit.  Adam took Sean home, and I took my kids out to the mall so Lyndsay could get a few things she needed and I got Dylan some things he needed for the new school year.  We walked over to the Americana and watched the fountains, and then headed home.  For dinner I made cheesesteaks, and the kids hung out in the family room watching America's Funniest Home Videos.  The mood was so much better.

Some pics of the day: 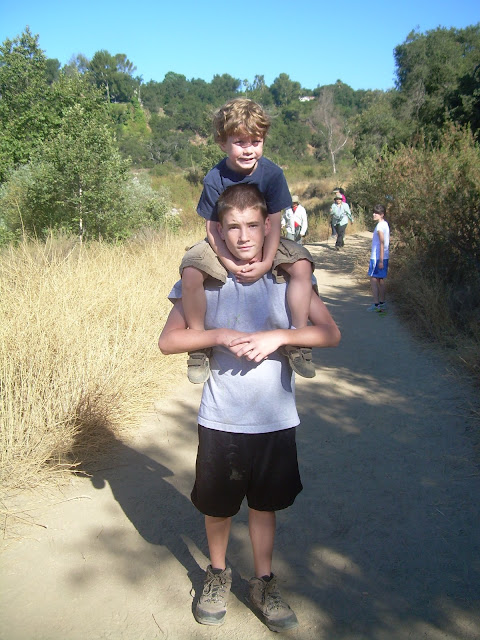 Some of the trail was easy like this, just packed sand.  But other parts were a little trickier, climbing up and down rocks and crossing the streambed.  Not too hard, but definitely challenging for Conor.  He was such a trouper! 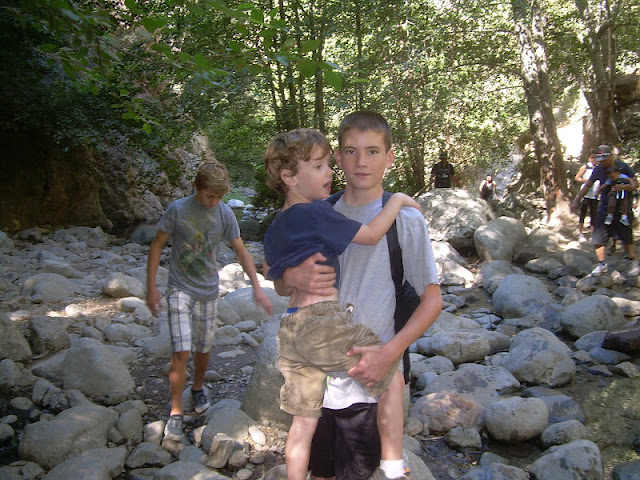 Aiden was heroic, sometimes carrying Conor across the rocky parts. 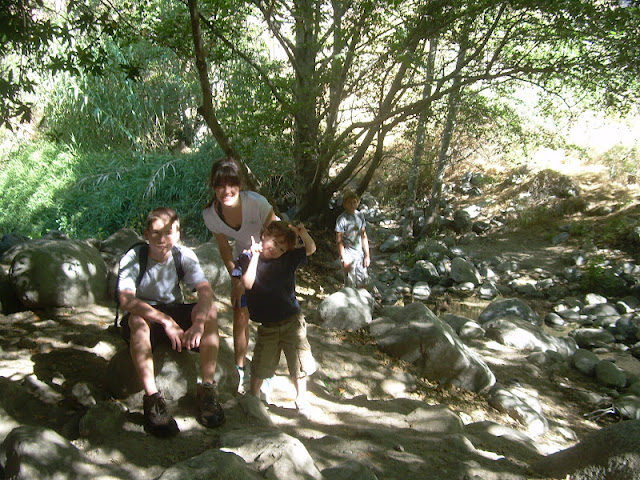 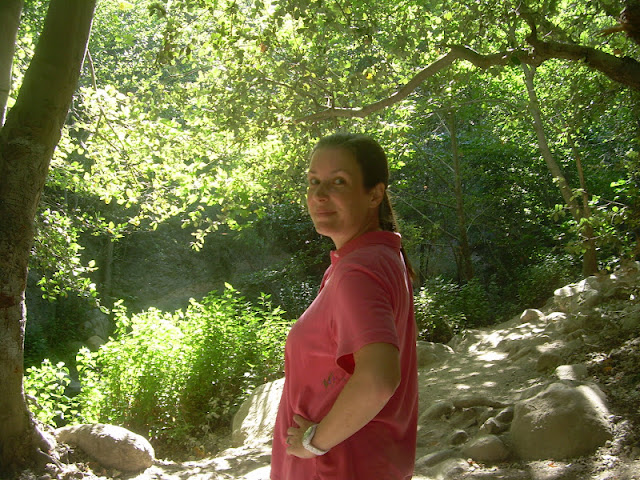 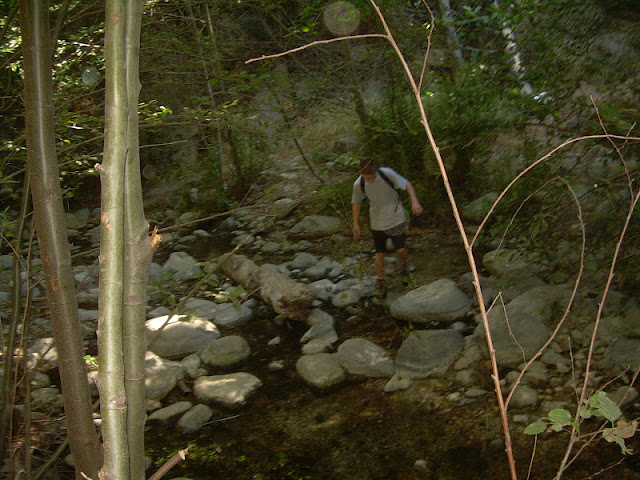 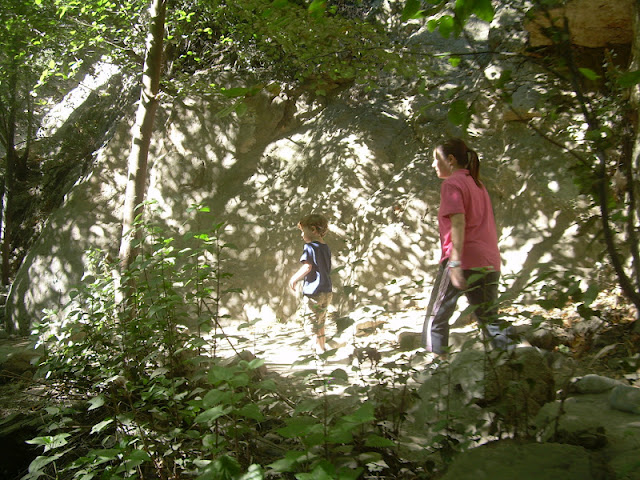 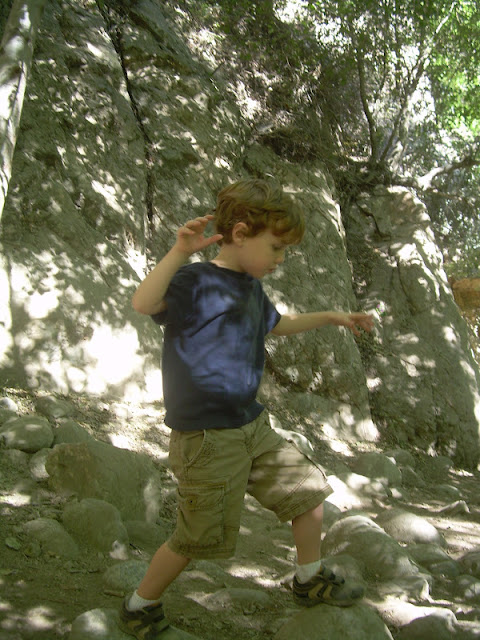 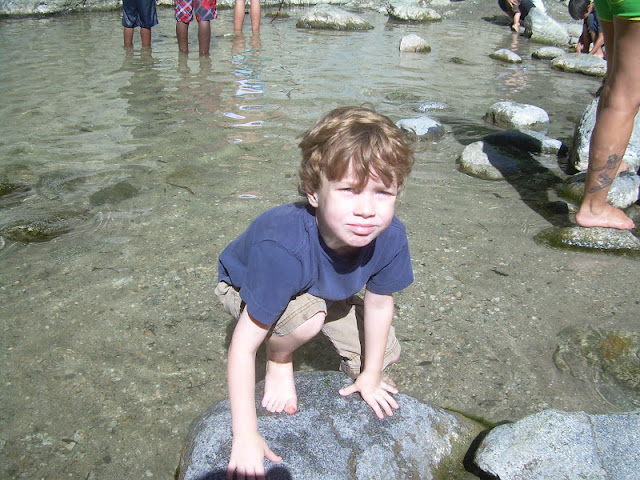 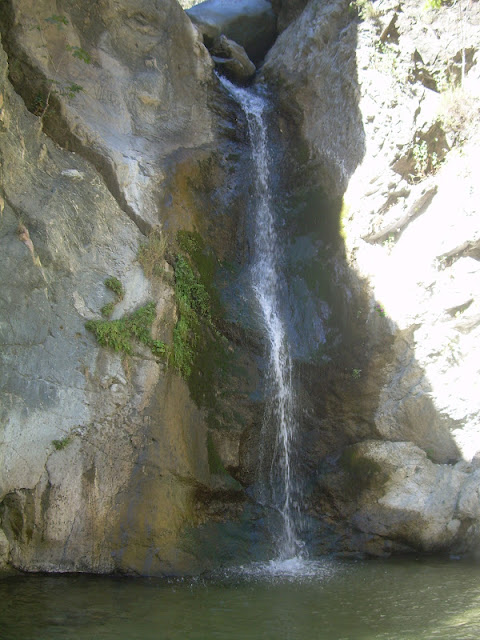 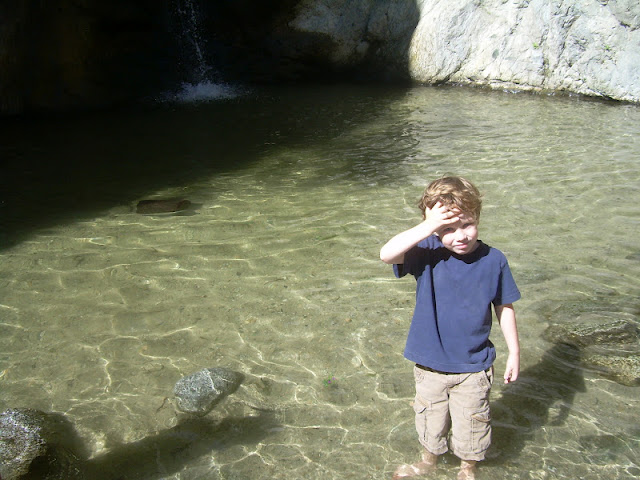 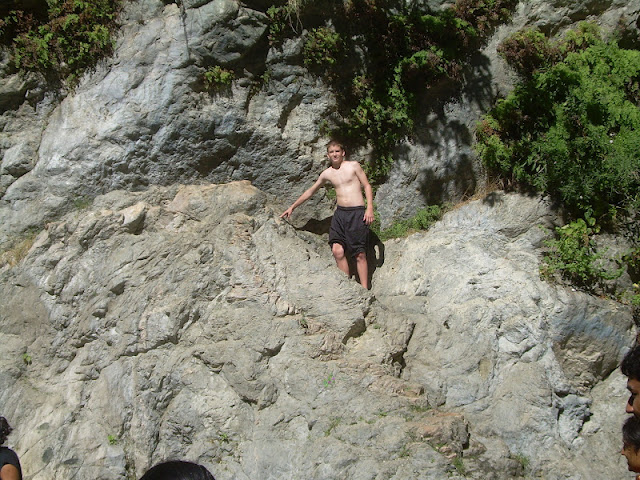 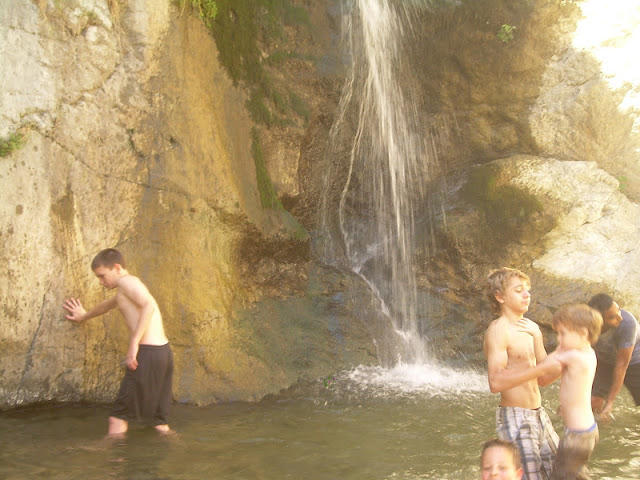 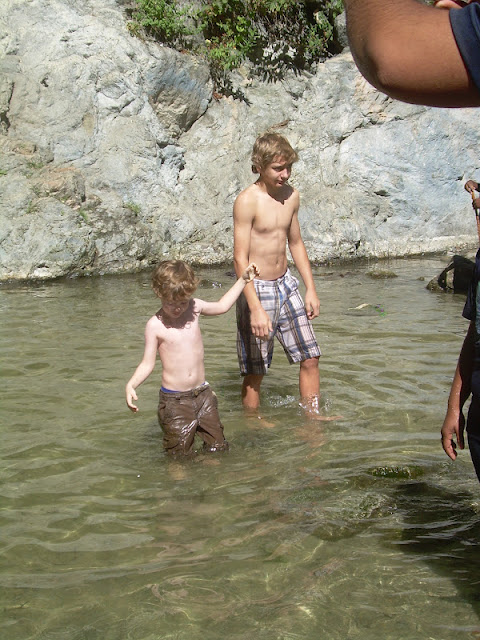 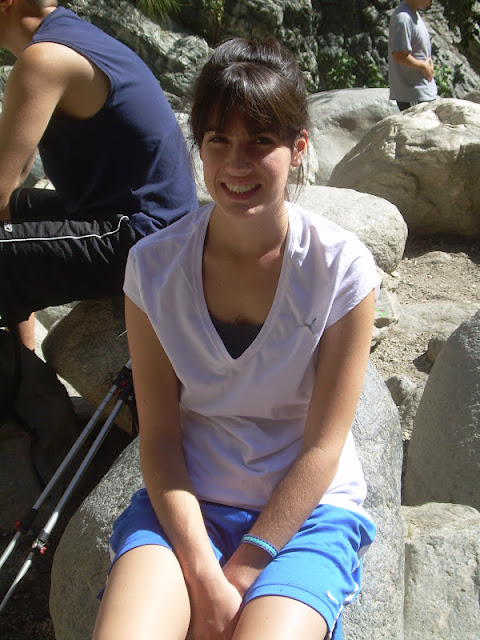 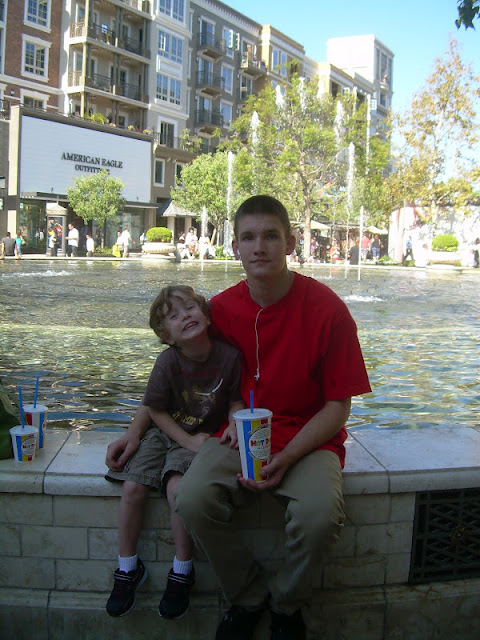 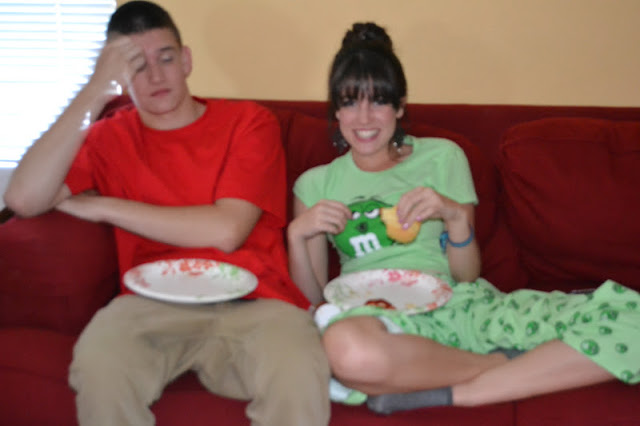 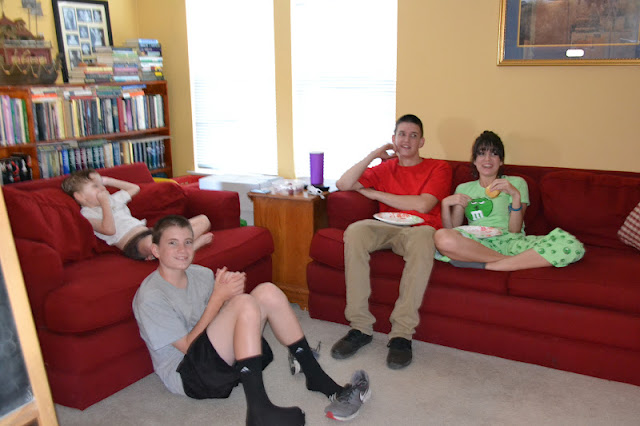 This scene?  All of them in one room, getting along, and laughing together?  Makes my heart so happy.
Posted by Jenna at 8:51 PM

I want to do that hike--but I'm glad to know it's longer than it's supposed to be!

I'm impressed by you. It is so hard for me to give my kids the freedom to decide not to do something with the family when I really want them to come. The magical days of outings with enthusiastic elementary aged kids leaves way too quickly. I'm so happy your evening was relaxed and happy. I know it was because you were understanding and loving earlier in the day. I probably would have ruined everything by forcing the issue. Or making a huge deal that I shouldn't have.