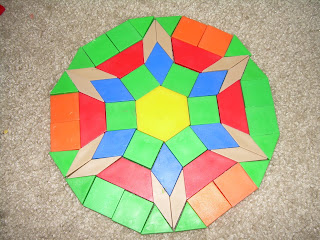 It's an interesting thing to parent teens and toddlers at the same time. As I look back, I notice that my parenting has always sort of followed the flow of Lyndsay, because she was the first. She set the standard of "you're not old enough", and then, "now you're old enough", which is both good and bad. I recognize that Aiden is allowed privileges at a younger age than were Lyndsay and Dylan, and I have to catch myself sometimes.

But then you throw in Conor. Almost seven years younger than the other five kids running around here. We definitely can't gear family movie nights to him. Nobody else would stay! Good thing Conor loves movies! More so, he loves the snuggling and a "show"--doesn't matter what show. He's in it for the snuggles.

With my three older kids at their dad's for the summer, and Adam's two at their mom's, there's been a lot of just Mom and Conor time. It's like a wonderful (and sometimes awkward) flashback to the early days of motherhood. Pulling out all the learning toys and puzzles, all the picture books, gobs of activity books and early childhood resources, and looking at each other like, "Now what, kid?"

Mothering a toddler or a preschooler is sweetness. Complete innocence and trust, an open mind like a sponge, and nothing but pure delight and joy in everything around them. Conor is happy to do whatever I'm doing. If I'm baking, he wants to help. If I'm cleaning, he wants to help. If I'm reading, he climbs up on the couch next to me with his blanket and a book and copies what I do. He likes to build with his brothers' trains, Legos, and castle sets, and he's always got a bag of "guys" (Lego people) that he totes around. Every "guy" must have a shirt (armor) and a hat.

When he was having his rounds of evaluations for Speech therapy several months ago, I was asked all kinds of questions about his developmental progress. Two questions made me feel like a total failure of a mother.

"Does he play with Play-Doh?" (ummmmm, no. I hate Play-Doh because my mother before me hated Play-Doh. Play-Doh has only made it into my house once by an evil child at Lyndsay's birthday party, but I threw it straight into the trash as she slept. He can figure out Play-Doh at somebody else's house so they can clean it out of their carpet instead of me.)

I felt the evaluator's judgment and condemnation, like, "And you wonder why your kid can't talk?"

I figured maybe I was ready to be a better mother now, so I plopped Conor into his carseat and off to Target we went. Mission? Scissors and Play-Doh. Oh, and the other horrible thing that Conor loves--magic markers. (Thank goodness that I have a toddler in the days of washable markers and Magic Wonder markers!) 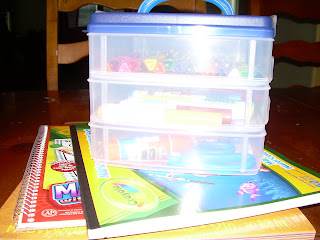 He was so delighted. We bought a small activity tub of Play-Doh complete with four colors and animal cookie cutters. I found a little plastic organizer with a handle and we bought little art supplies to go inside. His very own Magic Wonder markers (and a pad), some crayons, these fantastic Twistables (you've GOT to try these!), a glue stick (washable), some scissors, some stickers, and some construction paper. 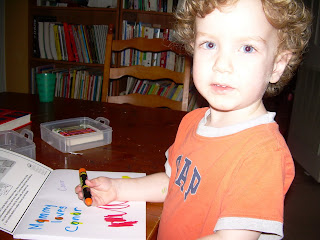 Never has a boy had so much fun. He wanted to get crafting right away! And, because I have worked hard to train him, he is meticulous at putting everything away where it goes and cleaning up when he's finished! It's a dream! 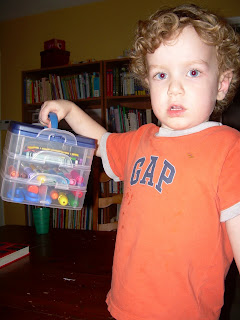 Guess what? The kid loves Play-Doh. I gave him one of my little rolling pins and he rolls and cuts till the clay is all done, lining up his circles and bears and dolphins across the table. Turns out, Play-Doh doesn't have to be a tool of the devil! 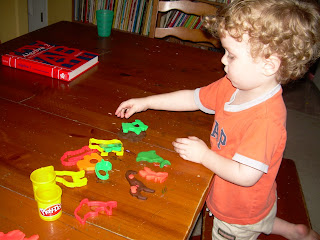 And he loves to cut! He's even good at it now, and I've added some patterned scissors to his collection. He cuts and cuts with determination, and he'll glance up the way a 6-year old will take one hand off the handlebars of his bike as he rides as if to say, "Look, Ma! No hands!", but in this case, "Look, Ma! No eyes!"

Digging through all of my thousands of dollars of homeschooling manipulatives and games and what-not has revealed other treasures. Like pattern blocks. I have several different sets, some plastic, some wooden. Sometimes we use the pattern cards, and other times we play "Make a Quilt Square", which would make my mother proud. Conor loves it. He loves to arrange the shapes and colors, and I figure it's got to be good for his brain, right? 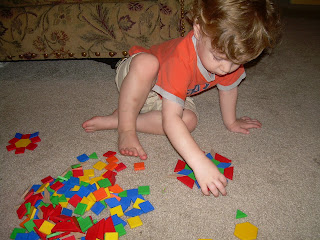 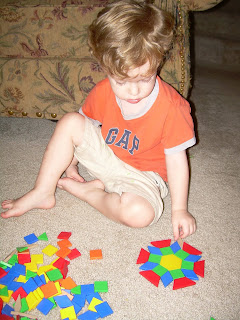 Of course we read. A lot. Seriously. And we practice all of his speech 'homework'. We sing, and we do hand rhymes, all the classics. And his new favorite activity? Weeding the flower bed. Keeps him busy for a long time, and then he likes to hold the hose and water.

It's fun to play new mommy for a while. Now that I've introduced Play-Doh and scissors, maybe I'm even doing a better job this time. Maybe?

Of course, I had more energy the first time around. It's a toss up. Conor's set up though, with his routines of fun and learning and play. This weekend the big kids will be home and I can add boy/girl drama, sex-talks, scouting, sports, shopping, and music back into my repertoire.

I think I'll bake a cake to celebrate.
Posted by Jenna at 1:08 PM

A cake definitely sounds in order.

You inspire me to be a better mom, Jenna..you really do. I guess I can ease up and finally let my kids play with playdough too..and maybe some scissors..but the child safe kind (are you using real scissors or the kind that only cut paper?). I need to head out to Target and get all of those preschool supplies I was talking about getting!

Thanks for giving me a kick in the pants. Love you!

So was I the one that gave you that playdough those many years ago? lol ...Your awsome!
Sara

I haven't pulled out the playdough since the Incident of May 2009. It was gruesome. Really.

What we're loving is water color paints. It washes off the table, the laminate floors, and the girls' hands. Not so much their clothes, but hey, it keeps them happy for HOURS.

He'll poke his eyes out!

Conor sounds a lot like my 3 y/o. Always wants to help me when I'm actually being productive. Ü I try really really hard to encourage it and let him work with me.

And like Abby.....you inspire me to be better mom, too. We do not own a pair of kid scissors because.....I guess I just always thought my kids were too young. But at 3 and 4 1/2, they aren't anymore. And Play-doh is too messy and such a waste of money because it goes dry and is ruined and ruins carpet! But now I learn that you can train your children to be responsible with it. Wonder of wonders. Ü

I vow to buy Play-doh and scissors next time I go to wal-mart.

I LOVE your blog! I came here via Luisa's contest - it's so funny - I know we have at least a Conor (although mine has a different spelling), parenting teens (done with the toddler stage), and homeschooling in common (done with that, as well, but I still teach at a homeschooling co-op/"school"). I hope your older kids' homecoming goes beautifully, and how nice that you had this time with Conor.

I'd never thought about how hard it must be, with such a span in the ages of children. You amaze me, everyday, Jenna.

And how wonderful to have "Come what may" come on and surprise me while I was reading your post.