Just this morning, as my friend and I were walking our laps around the high school track, chattering away about school shopping and our high school-aged daughters, I mentioned some random memory I had about my own school days.

"I was such a nerd," I said, "that I would make up a calendar and plan out my outfits for the entire month."

"Wow," my friend replied, not at all trying to talk me down from nerd.

"I mean, I even wrote down what underwear I would wear. And what socks. And which necklace, earrings, and bracelet. Total dork."

Over the summer, while my kids were in Arizona, their dad happened upon Lyndsay doing nothing else but. . .making a list. "You are just like your mother," he told her. And that wasn't good or bad. In fact, I found it a little sweet that he remembered something like that about me. And yes, she's a lot like me. Making lists.

Yesterday, as we were walking home from the track, just as the sun was peeking up over the mountains, she told me that she'd started a list in the back of her Journal of life goals. I think it had something to do with the fireside the night before, where the Bishop showed a video of Randy Pausch's Last Lecture.

"That's a great idea," I encouraged her. "Setting goals is a great way to live life, because you're sure to accomplish more if you have some idea of what you want to do."

She told me that on her list were things like travel to another country (preferably Thailand or Peru, but some place in Europe would be great too), not date until she's 16, not kiss until she's 18, go skydiving (what?!? Now that part is like her father, for sure! "Don't tell me when you're doing it," I begged, "Just tell me when it's over."), and in Randy Pausch style, she'd like to be the one that wins the huge teddy bear at the fair too. Just for fun. Actually, whatever is on her list, I have no doubt she'll accomplish it all. 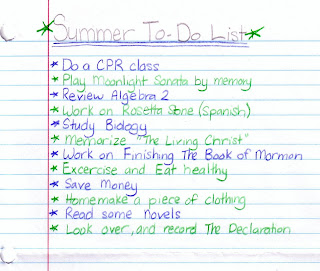 Then today, while cleaning up bookshelves, I found a folded piece of paper with a list written on it, in Lyndsay's sweet handwriting. Her Summer 2009 Goals. It was a pretty impressive list, especially considering she would spend a good chunk of time in Arizona, a week at Youth Conference, and working full-time the rest. She had goals on her list like "Do a CPR class", and "Play Moonlight Sonata by memory". "Memorize 'The Living Christ'", and "Study Biology." She's almost through with 'The Living Christ', and others she has completed, like "Homemake a piece of clothing", and "Exercise and eat healthy", and "Read some novels." "Save money", for sure. Suddenly I feel urged to locate a CPR class and get her signed up. I not only love making lists, I love crossing things off of them too, my list or not. 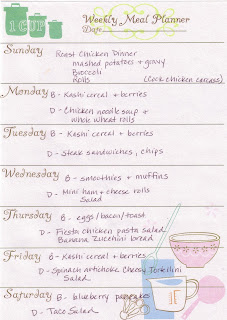 I thought about the lists I still make, and how they create such a tangible framework for the routines of my life. I have lists of things we need, lists of things I hope for. Lists of ideas for Christmas gifts, lists of things that come to my mind pertaining to each child. Chore lists (for them and for me), grocery lists, meal plans, and resolutions. Lists of scriptures that I love, lists of recipes I want to try. Lists of books I've read and hope to read. Lists of bills to pay, lists of writing ideas, and lists of movies I want to see.

Lists make me feel productive and focused. Lists help me see progress and improvement. In fact, writing this post about writing lists was on my to-do list for today! Along with a million other things, so in the spirit of crossing things off of lists. . .

I'd better get cracking!
Posted by Jenna at 3:46 PM

Lists for outfits for school? That AND how organized your bedroom was! I remember because I was in there trying on your high heels and jewelry while you were at school. Younger sisters do that sort of thing and your room was a total playground for me heheheh..oh, that's cute! Must have driven you crazy..but you never said anything (that I remember) and I love you for that.

You're eating Kashi GoLean, right? Sure is nutritious! Add peanut butter toast topped with sliced apples, honey, and cinnamon with a glass of milk to your breakfast list for next week..it's so yummy and filling!

You've reminded me to finish my meal plan and shopping list for the week! Better get hot on it.

Sheesh! And my mom thought I was a nerd for taking notes at firesides and then typing them up when I got home...

Oh, I am so like you. I have lists for everything too. Lists a recipes for each cookbook. Lists of things I can make for Christmas. Lists of things that need to be fixed around the house. Lists of seeds to plant eventually. Lists of bills to pay. My life is lived by lists.

I love lists and make so many of them. The only problem is I don't always follow them and often can't remember where I made the list in the first place. Somehow just writing it down seems to help though. Wish I could be as organized as you.

I am not a list maker. But I need to be. I feel like I have so much I need to do, and so much I *want* to do, and the two rarely mix. I need to cross off the needs before I fulfill the wants. Otherwise nothing gets done!! i.e. I'm blogging right now instead of doing dishes.

p.s. love the last lecture. And I wouldn't plan the month, but I'd write what I wore each day on my calendar so I wouldn't wear the same thing really close together.