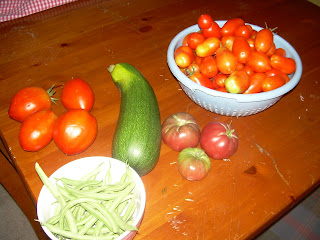 The beans are finally producing something worthwhile again! This zucchini is ginormous, but it was hidden under some zuke leaves and somehow it evaded my harvesting eye. The flavor is probably not the best since it's so large, but I will grate it up and freeze it for cake/muffins/pancakes. I got some more Black Krim tomatoes, which are large--they just look small next to that zucchini. And the first Amish Paste tomatoes are ready!
They are really large. I took a (terrible washed-out) shot of the Amish Paste (top) in comparison to the largest of the Romas (bottom) so you can see the size difference. I think I'll plant several more Amish Paste plants next year because they're so beefy. A lot more sauce for the buck. 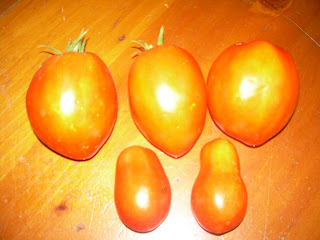 And then, as I was blindly reaching around in the Roma plants for stragglers, I move a branch to see this: eyes looking at me. Not my favorite. 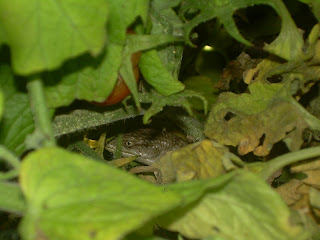 When I saw how long his back was, I thought it was a snake, but it's just a very large alligator lizard living in there. Probably feasting on all the spiders that live in the plants, which I allow to happily take up residence so that they can keep up on the insects and I never have to use insecticides. A whole cycle of life right in the Romas. But still, he makes me a little uncomfortable, so I sent my other pest control out on the job: 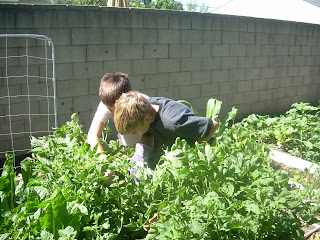 And maybe just for safety's sake, I'll turn the Roma harvesting over to the kids permanently.
Posted by Jenna at 10:39 AM

Lookin great, Jenna! I don't even need to say I'm impressed anymore because that sort of thing is just automatic when it comes to you.

I've decided that food growing doesn't seem to be my thing. I have yet to try one of the tomatoes from the plant out back. Either the birds get to them first or they sit on my counter til they're no good anymore. I think I'm afraid. I know..it's weird. I think, at this point in my life, I'd prefer a lovely flower garden and someday when we own our own house and I don't have to worry about tearing up the yard, I'll try again. I'll go all out. This is what I tell myself.

So for now..I will sit back and watch in awe at the amount of produce you and Hannah get and possibly be a little jealous at the sisterly connection you guys have. <3