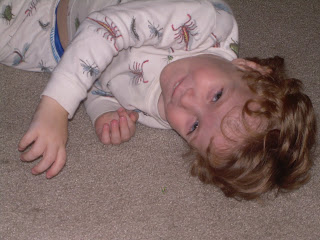 Conor will never work for the C.I.A., that's for sure.
Yesterday was Adam's birthday. I was late getting his gifts together, and had only done part of the shopping. Yesterday morning I assembled a huge gift bag full of all his favorite junk foods. (Adam loves junk food.) Sun Chips, Pop Tarts. Starburst, Skittles, on and on. Conor was watching a movie and only barely aware that I was doing anything. Or so I thought.
When Adam woke up and came into the room, we regaled him with a fairly decent rendition of "Happy Birthday," and then Conor said, "We got you chips! In the blue bag!" There went the Cool Ranch Doritos. Adam loved the inside knowledge and pried for more, but I jumped in with warnings to be silent.
When I had to take the boys to Ross, because Adam needed some new pants, Aiden and I lectured Conor the entire way:
"We never tell people what their presents are. It's fun to be surprised. We want them to open their presents and be so happy when they see what they got. Didn't you like it last week when you got to open up your presents and be surprised?"
"Yeah, I thought I was not getting a robot man mask but then I did get a robot man mask."
"See? That was fun!"
Over and over we explained it, pressing upon his young mind from every angle the importance of birthday secrecy.
We went into Ross and found two pairs of perfect pants, and on the way home, knowing full well that Adam would try to take advantage of Conor's weakness, we role-played. "If Daddy asks you what we got him, you just say, 'I don't know.' Let's practice. What did you guys buy for me?"
"I don't know."
"Perfect. What if he says, 'Did you buy me clothes?' What do you say?"
"I don't know."
"Yes! How about if he says, 'Did you buy me pants?'"
"I don't know."
We practiced every imaginable variation, and I felt reasonably sure we'd secured our witness. 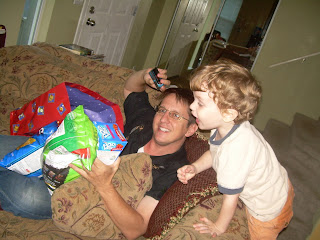 I tossed a few more reminders out there throughout the afternoon, and I even heard him give his practiced line. "I don't know." The presents were wrapped. Dinner was eaten. Time for the unveiling. Conor brought the first gift to his dad, and stood close by. When the Cool Ranch Doritos came out, Conor jumped up and down. "See? I told you we got you blue chips!"
Adam unwrapped everything and was very grateful.
After I'd put Conor to bed for the night, Adam revealed that he hadn't really been surprised. (He is an actor, after all.) That afternoon, while I was teaching piano lessons downstairs and Conor was in his dad's office watching a movie, twiddling his blanket and sucking his thumb, suddenly he pulled his thumb out and blurted out in one breath, "We got you pants. Two pairs. One brown and one black." And back in went the thumb. He just couldn't take it. The secret was too much for him.
The little rat.
Ah, but little does he know. They weren't black, they were olive green. So that explains why Adam opened the second pair and said, "Oh, black pants! No, wait, they're green!"
Must. Increase. Birthday. Security.
Posted by Jenna at 6:11 AM

So cute, Jenna!!! You always make me smile! HOWEVER... those scorpion pajamas... Ghaaaaa! I am terrified of scorpions and suggest that you head straight back to ROSS and pick Conor up a nice pair of pj's with cottonball print... or kitty cats or maybe dandelions or something!!! =) ~Shawna