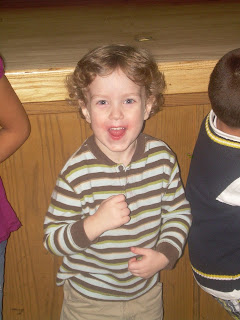 Conor loves words. This is interesting because, as you know, for a long time he didn't talk. And when he did begin to talk, nobody except his family could understand him. But he's come a long way, and it's apparent that for all those months when he wasn't speaking, he was listening. And accumulating vocabulary.
His prayers are the best. At mealtime, he once said, "Heavenly Father, thank you for this scrumptious meal." And at Family Home Evening on Monday he said, "Bless us to keep the commandments and to respect Jesus." Respect Jesus? What 4 year old says that? But it was a good reminder for all of us, indeed. 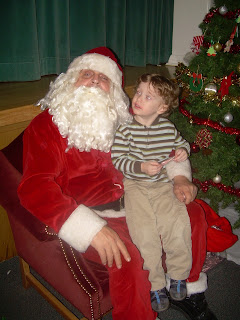 When we went to the Ward Christmas party last weekend, and Santa walked in, Conor leaned over to me and said, "That Santa kinda creeps me out." But he got over it pretty quick so he could get his candycane.
And yesterday he stormed into the livingroom where I was, and with clenched fists he said, "I am so fascinated!" By the looks of his demeanor I said, "I think you mean 'frustrated.'"
He paused and said, "Well, what does fascinated mean?"
"Fascinated means really interested and excited about something."
To which he replied, "Well, I want the one that means really angry." (not mad, angry.)
"Yup. That's frustrated."
"Okay, then, I am so frustrated!"
So, it got me to thinking. Tomorrow I am taking my last two finals of the semester. Political Science and Microbiology. (I already took the Psychology final.) Do you remember this post? The one where I had this burst of inspiration that I should go back to school for my RN degree and you all encouraged me to go for it? Well, it has taken a bit longer than I originally thought, but the first milestone is about to be completed. I have now completed all of my prerequisite courses (which turned out to be slightly more than 3,--9 actually-- even with my old classes still being accepted) and will be able to submit an application for the Nursing Program in January. Can you believe it? It's been two years of courses, and now I face the next hurdle.
I have all sorts of feelings inside. Pride in what I've accomplished so far (4.0 GPA!) and a bit of nostalgia that this part is coming to a close. Excitement at what lies ahead, and a bit of trepidation too, as this next phase is the "real deal." Wondering how I will work the course load into my schedule, or rather my schedule into the course load, since the Nursing program is not a student-flexible one, but rather predetermined and fixed. A bit of giddiness, some fear.
What's the word I'm looking for? What's the perfect word?
Posted by Jenna at 8:08 AM

i'd vote "anxious" without the negative connotation.

the first two definitions at dictionary.com show anxious as meaning

1. full of mental distress or uneasiness because of fear of danger or misfortune; greatly worried; solicitous:

congratulations on the perfect GPA. i too recently completed my bachelor's while working full time with two kids. it's hard but so worth it. and, the time passes and NOW you have fabulous grades to show for it along with your fabulous kids' accomplishments.

keep it up! it's all worth it!

Congratulations! The advantage to going back to school later in life vs. straight out of high school is that you are more willing to LEARN and have more wisdom in your studies. You are going to get such a great education (to become a great nurse) because you have to sacrifice for it and you have the benefit of life experience.

You will do just fine. You've done hard things before and you'll fly through this too!