A Playdate and a Party 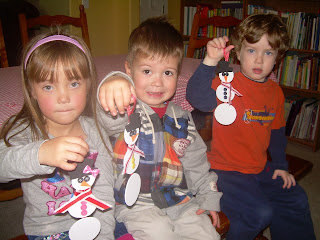 It's weird having an only child; I don't know how people do it. I realize that I have four children, but Conor is so much younger that it often feels like he's an only child since we spend so much time together, just he and I. Many days I wish I had just disregarded my personal circumstances and had another child, a sibling for Conor. A playmate.
I didn't have to worry about playmates for my older three children. They had each other, and most of the time a herd of others that I tended for daycare. Conor lives a completely different lifestyle than they did, and sometimes I feel sorry for him. I mean, we do plenty together, and he gets lots of interaction, but I wish he had a little sister, to be honest.
When the big kids were in Arizona, Conor was terribly lonely. As soon as was feasible, I invited some friends over for a playdate. Two little ones, a brother and sister. Conor could barely stand the anticipation. We made a list of things they could do together when Leilani and Drew arrived. Legos, Pictureka, a snowman ornament craft, playing kitchen, etc. When they arrived, they wanted to play kitchen right away. Conor seemed upset.
"What's wrong?" I asked. "Playing kitchen is on your list and they seem to love your kitchen."
"But Legos is first on the list!" he said, exasperated.
Oh dear, I'm afraid his lack of spontaneity is my fault. I stick to lists too. But he relaxed with a snack, which he offered first to his little buddies. So many things to learn: manners, going with the flow. . . it's exhausting to be 4.
I wanted to have a little craft for the kids to do, so I came up with this snowman ornament based on an idea I'd seen in Family Fun magazine a while back. They loved it. 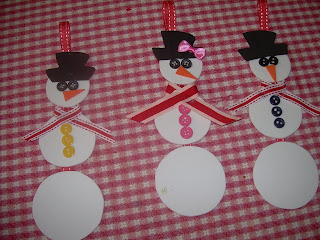 After two hours, my friend Mari came to pick up her kids. Nobody wanted the fun to end, so we promised to get together again soon. In fact, Mari invited Conor to come to Leilani's 5th birthday party this Saturday. His first party invite! He is so excited. I asked him what he'd like to give her as a gift and he said, "How 'bout her very own Robin? She liked my Robin." Which is thoughtful, true. But Leilani is a girly-girl, so I made her a little purse pouch that she can carry around. 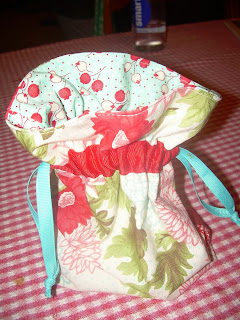 It was super easy to put together, and super cute for a little girl. Actually, I was thinking what a great many other uses it could have, like a travel jewelry pouch, for example. I got the idea and followed the tutorial on one of my new favorite blogs, 7 Layer Studio. Shelley is incredible. You should browse around.
So we can't wait till Saturday, and hopefully Leilani will love her little purse!
Posted by Jenna at 8:26 PM

What about putting a "Robin" hair clip from Lyndsay inside the little bag?

I'm finding that I have the same problem with my little Dan Dan. He and Thomas are nearly 7 years apart... and Katie is 3 years older. AND, all his little Primary friends are already in kindergarten. The poor little fellow is stuck with me still. But our MW pre-school is his beloved school.

I have an only child. We constantly call friends and ask if we can "rent-a-kid" - we will pay them to watch their kids so ours has other playmates. ;) We also always take friends with us to the zoo, museums, even camping trips. It is just the way we roll.