All Together Again: Day 7 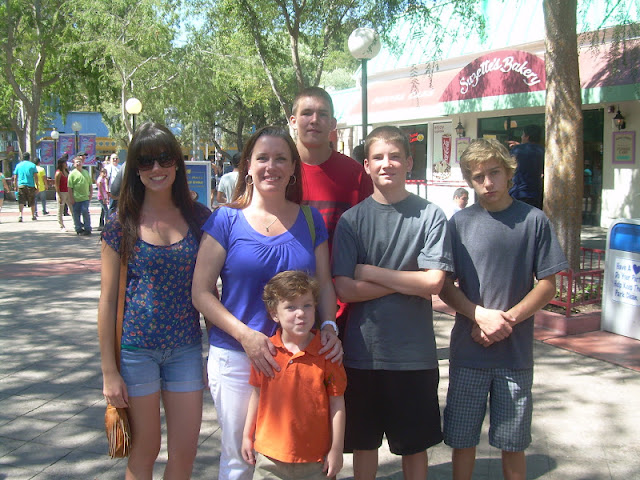 Six Flags Magic Mountain today, our Grand Finale!  The boys were so excited about this trip.  Dylan brought a friend (Brad) and Sean came with us too.  We were there before the gates opened, in the throng of people already gathered.  And man was it hot.  An omen of the heat to come.  I got everyone sunblocked up before we left, thankfully, but some people (Lyndsay) were feeling the pain from sunburns acquired yesterday at the beach.  (Was that only yesterday?)

To suit everyone's needs, we made plans to meet for lunch at Panda Express at 1:30, and then we split up.  Dylan, Brad, and Sean headed off together; Lyndsay and Aiden stayed together; and Conor and I went in search of Little-Kid Fun.

After two rides (X2 and Viper), Lyns wasn't feeling so hot, so she delivered Aiden to the boys and then hooked up with me over in Bugs Bunny World, where we spent most of the day with Conor.

By 11:30 I wanted to die, cry, or go home.  It was So. Hot.  And I was mostly just sitting and watching Conor.  I had toyed with the idea of popping a book in my purse this morning, but then thought the added weight wouldn't be a good idea, and plus, who brings a book to Magic Mountain?  Well, I wish I had.  Conor was sweaty and miserable too, his face flushed bright red and his hair plastered to his forehead. 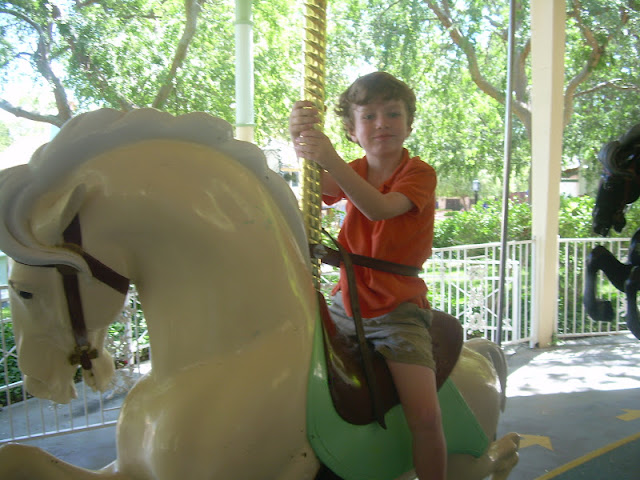 The boys arrived a little early and we headed over for lunch and DRINKS.  By that time, Sean was also feeling sick and barely touched his food.  He hung back with Lyndsay and me until he felt better and then rejoined the boys.  Who now had Conor.  The big boys took Conor on a water ride (Jet Stream) and then, by the time Sean got there, Ninja.  Which scared him the first time, but he wanted to do it again.  I love that. 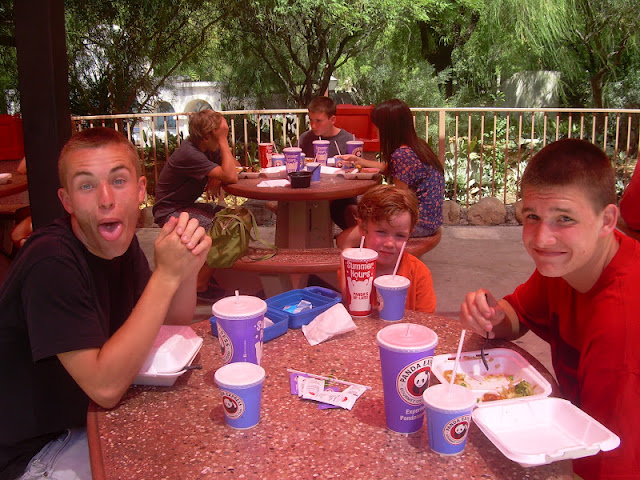 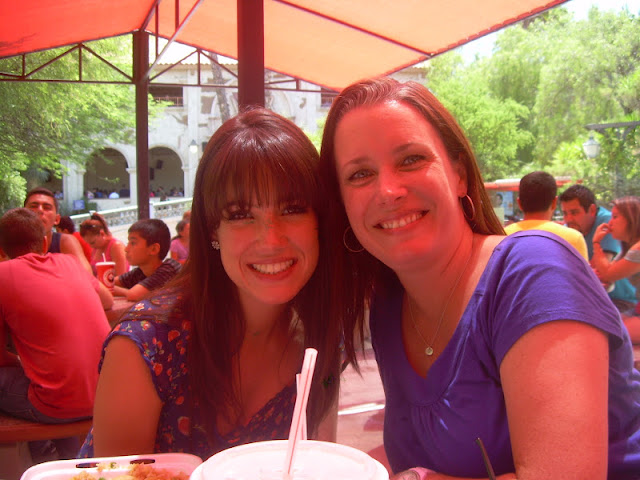 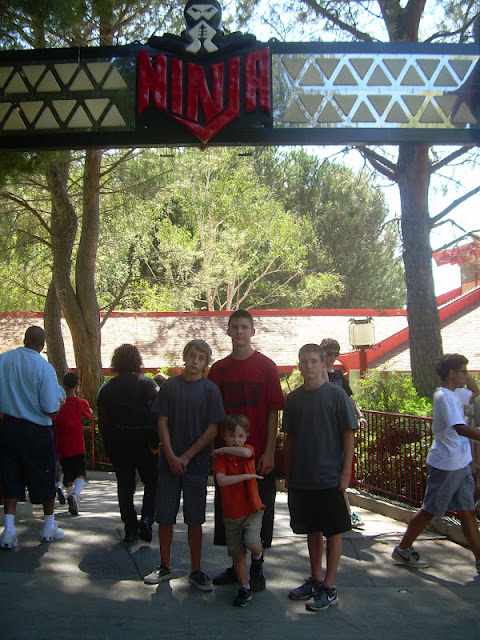 Here are the boys (minus Brad in the above picture) all Ninja-ed out.  And super sweaty and hot. 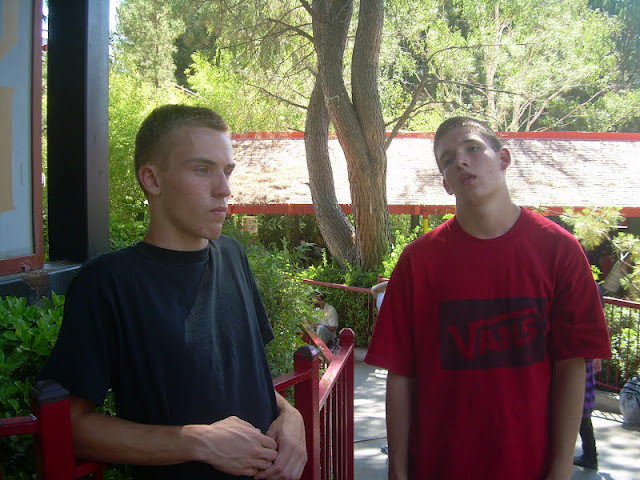 We went for an ice cream break over to Ben and Jerry's.  My homeboys. 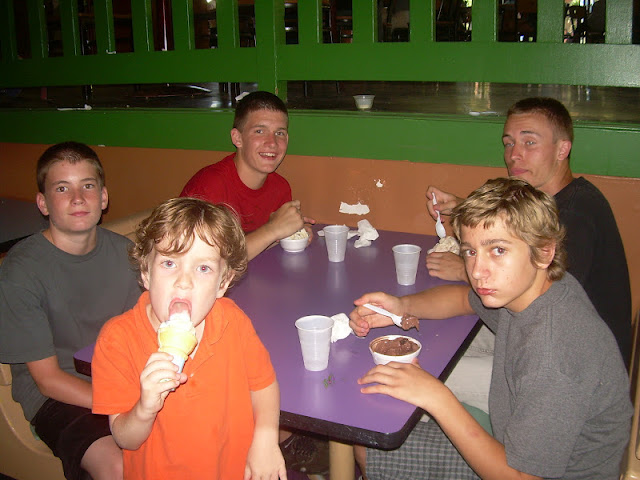 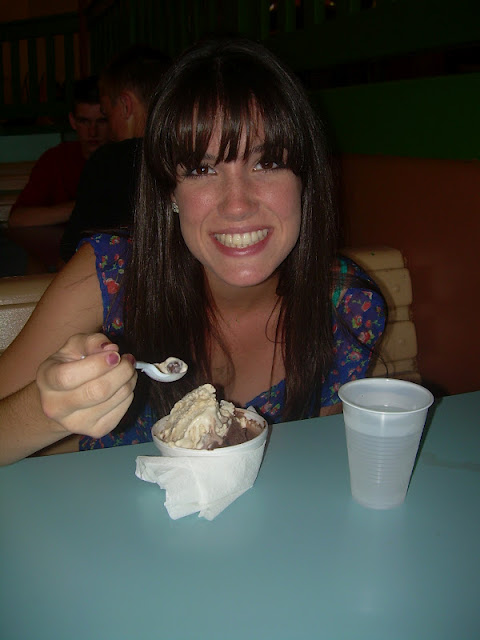 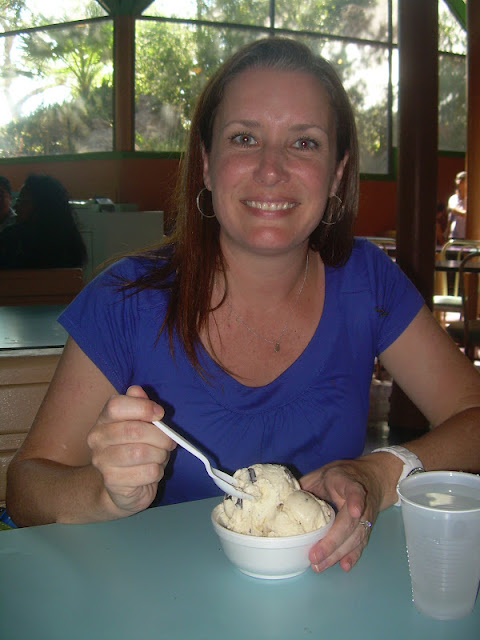 Lyndsay went with the boys then to ride Goliath, and Conor and I hitched a ride on a very slow-moving train. 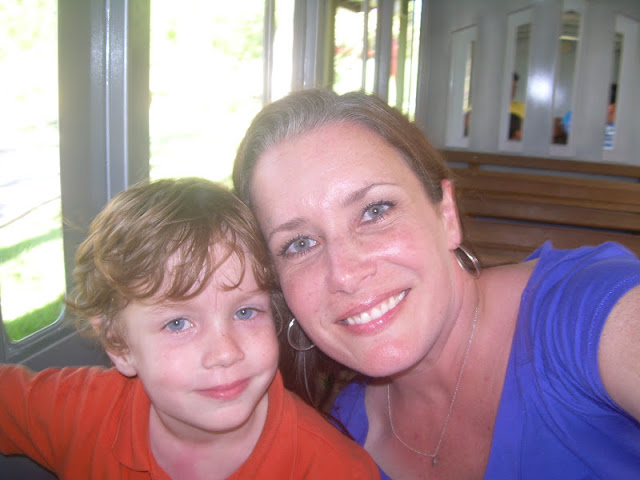 Then Conor played in the water to cool off, rode a few more kiddie rides, and then Lyndsay took Conor on the Buccaneer and Swashbuckler.  And then Conor rode them each again by himself.  He was having an absolute blast. 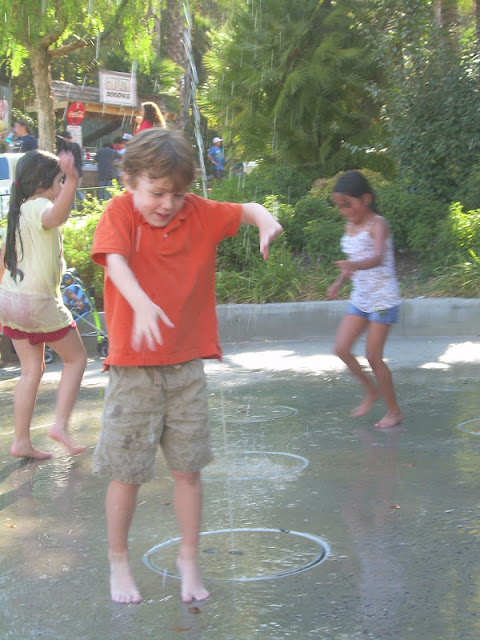 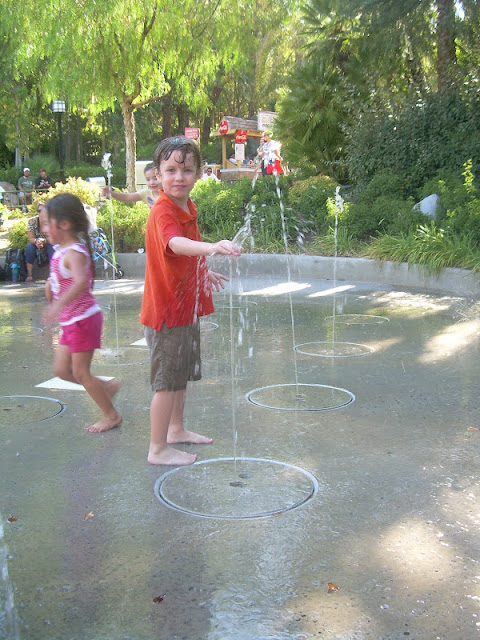 Then back over to Bugs Bunny World where he rode every single ride at least once, sometimes five times, and all by himself, while Lyndsay and I cheered him on, and kept up with the boys' progress via texting.  They were having one more run at Tatsu and Goliath, their favorites. 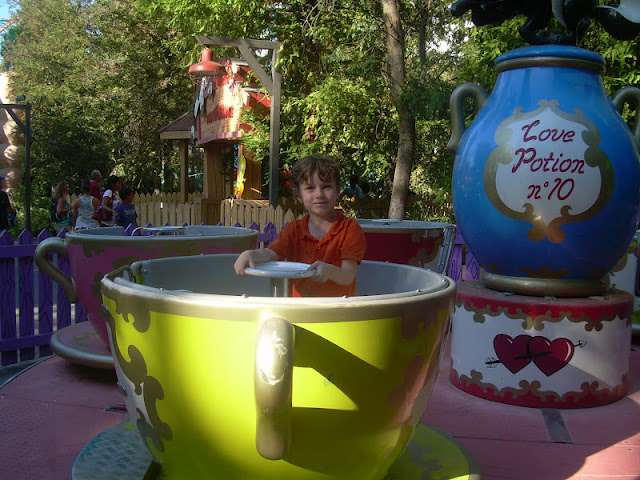 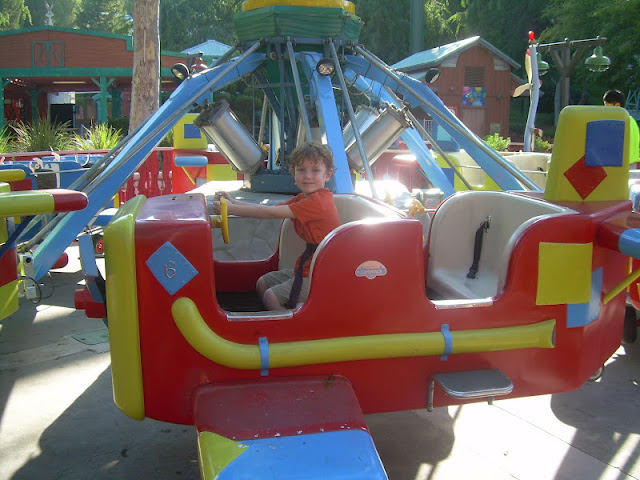 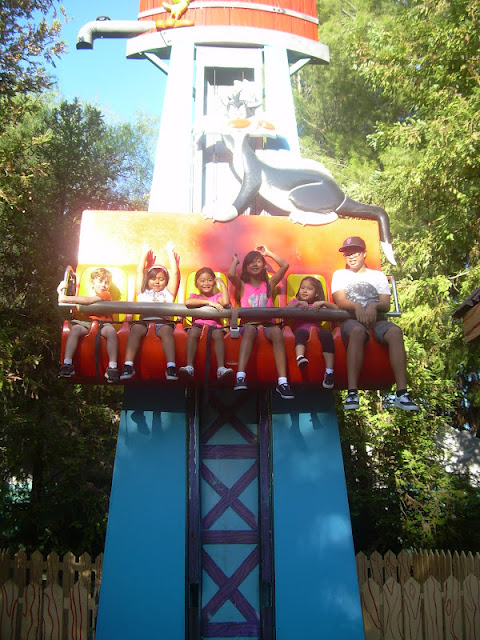 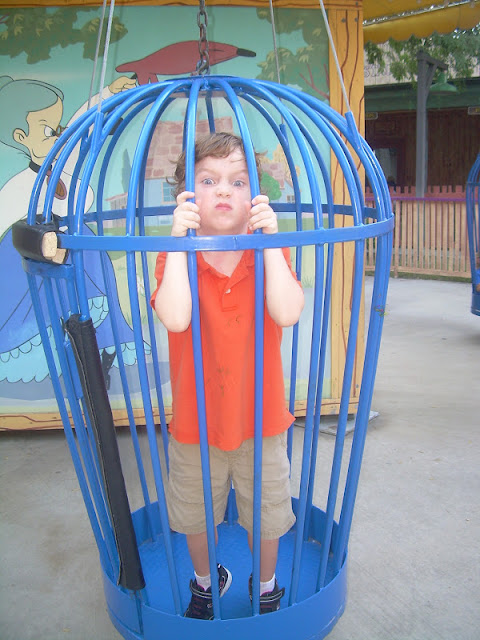 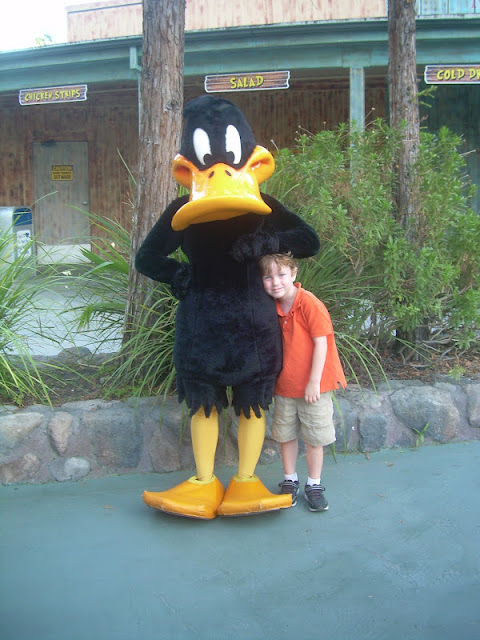 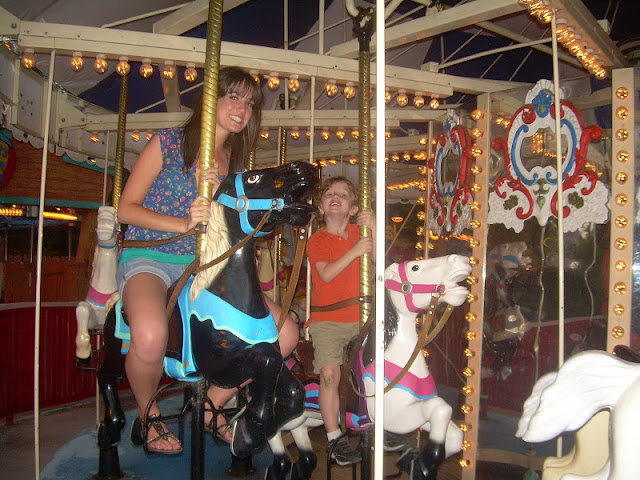 Then, just minutes before the park closed, we met outside the gates for some final pictures and a recap of adventures.  The boys had so much fun, Lyndsay hung in there as well as anyone, and I was satisfied to see them all so happy.  I really don't enjoy theme parks, but I thoroughly love seeing my kids have a good time, so it was worth it. 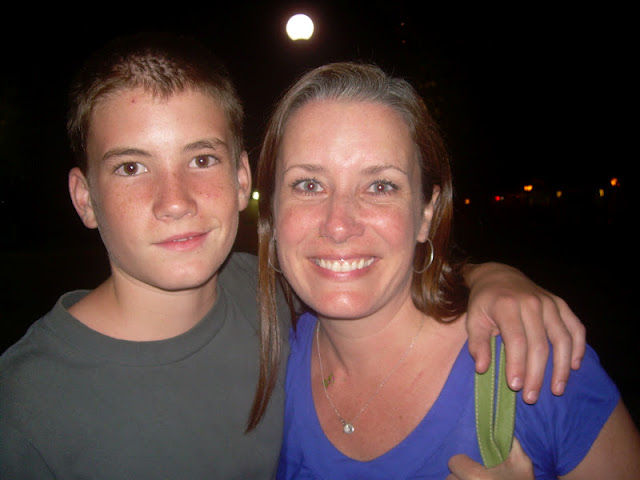 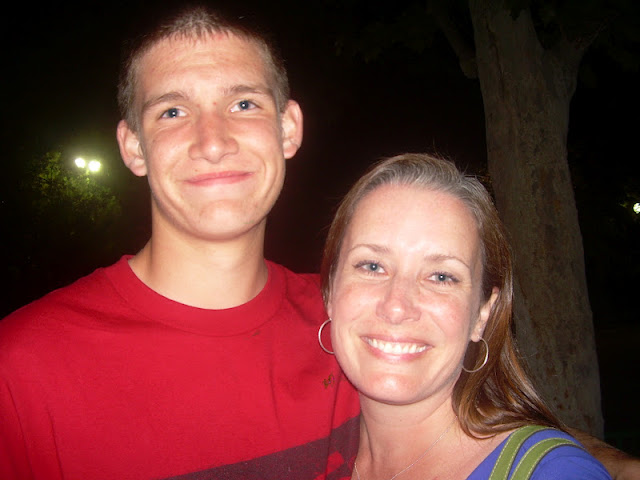 Sean was a sport to carry Conor on his shoulders.  Conor whose little legs never gave out on him the whole 11 hours we were in the park.  They were always good for "just one more ride."  Everyone was so tired.  Everyone's feet hurt.  I stopped at Taco Bell on the way home for hungry boys. 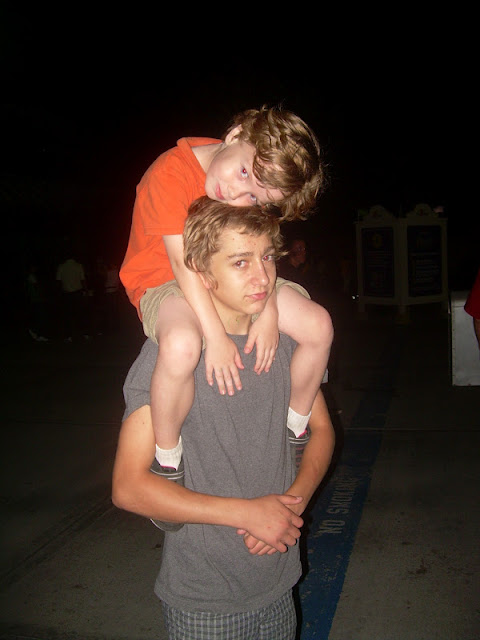 After dropping off Brad, we went home.  The kids ate, they gave Adam the details of the day, and Conor got a bath.  Then it hit me: this is our last night together, all together.  For who knows how long. Pretty soon we'll be in three states.  It has been such a luxury to have this time together.  We had Family Prayer, all of us in Lyndsay's room.  Thank goodness for prayer.

All my boys love Goliath. I can only ride it once when we go to Six Flags over Atlanta. Of course, I also pop dramamine like it's candy when so I can survive the rides.